MOROCCO – Manufacturer CITIC DICASTAL Opens its First Factory in Africa in Kenitra
CITIC DICASTAL, specialized in manufacturing aluminium alloy wheels and other aluminium parts for the automotive industry, inaugurated its first African factory in Kenitra, Morocco on June 25. The new factory is a Morocco-China industrial cooperation project, part of the “One Road, One Belt” program. The USD 400 mn factory has an annual production capacity of 6 million pieces, and will supply parts to the French car manufacturing giant PSA Group, also based in Kenitra.
June 25, 2019

MOROCCO – Morocco’s Platinum Power and China’s CFHEC to Build USD 300 Mn Hydropower Project
Platinum Power and China First Highway Engineering Co (CFHEC) signed an agreement on July 10 to co-develop, finance, and build a USD 300 mn, 108 MW hydropower plant in central Morocco. The parties announced they would also partner on renewable energy projects elsewhere in Africa. This will be the first time the companies have partnered on a project.
July 10, 2019

TUNISIA – Government Announces Tender for Six 10 MW Solar Projects
Tunisia’s Ministry of Energy, Mines and Renewable Energies has put out a tender for the construction of six solar power plants with an installed power capacity of 10 MW each, as well as ten 1 MW solar parks. The tender will be open until November 26. Selected projects will sell electricity to Tunisia’s state-owned utility, Société Tunisienne de l’Electricité et du Gaz (STEG) under a long-term power purchase agreement. The Tunisian government has a strategy to install approximately 1 GW of renewable energy capacity in the period 2017-2020.
July 15, 2019

ALGERIA – Sonatrach and ENEL Renew Their Gas Sales Contract for 10 Years
Government-owned hydrocarbon company Sonatrach and Italian group ENEL have renewed their contract for the purchase and sale of gas for ten years. Under the contract, Sonatrach will provide 3 billion cubic meters of gas per year to ENEL for the next ten years. The companies signed a contract in 2001 for the provision of gas to Italy via the Enrico Mattei gas pipeline.
June 26, 2019

ALGERIA – Concrete and Clinker Exports Increase by 850% in the First Five Months of 2019
According to the Direction for Customs, Algeria exported USD 29.96 mn in concrete and clinker during the first five months of 2019, reports the Algerian Press Agency. This is close to an 850% increase since the same period last year. The Ministry of Industry and Mines aims to increase cement exports to USD 500 mn per year in the next five years. There are currently 17 cement factories in Algeria, with the two main players being Algerian group GICA and the Swiss multinational Lafarge Holcim.
July 20, 2019

ALGERIA – French Car Company PSA Group Launches Works on a New Assembly Factory
PSA Group, which manufactures Peugeot, Citroen, Opel and DS Automobiles cars, officially launched works on a new vehicle assembly factory in Tafraoui near Oran on July 21. The factory should begin operations in the first half of 2020. It will produce 25 000 cars a year in 2020, and up to 75 000 cars a year in the four years after that.
July 21, 2019

MOROCCO – Morocco Attends African Union Summit, Emphasizing its Stance on Polisario
The Minister for Foreign Affairs, Nasser Bourita attended the African Union summit in Niamey on July 7, for the launch of the operational phase of the African Continental Free Trade Area (AfCFTA). Bourita emphasized that Morocco’s signature of the AfCFTA agreement was separate from its stance on the self-proclaimed Sahrawi Democratic Republic (SADR): Morocco’s signature “cannot be interpreted as an acknowledgment of a situation, a fact, or an entity it does not recognize […],” he stated. Morocco has rejected any mediation by the African Union on the issue of Western Sahara.
July 7, 2019

TUNISIA – ISIS Releases Video Calling for More Terrorist Attacks on Tunisia
The “media desk of the Islamic State (ISIS) in Tunisia” released a video on social media on July 16 showing masked and armed men calling for more terrorist attacks to target Tunisia. The video’s release comes at a time of heightened security concerns in the country. Two suicide bombing took place in Tunis on June 27. The attacks, claimed by ISIS and targeting Tunisian security forces, killed one policeman and injured several civilians. On July 3, the presumed mastermind of the attacks, Aymen Smiri, blew himself up in Tunis following a police chase.
July 17, 2019

ALGERIA – Bensalah’s Interim Term Ends, No Presidential Election in Sight
On July 19, thousands protested in cities across Algeria, seeking the resignation of interim president Abdelkader Bensalah. Bensalah’s 90 day interim term officially expired on July 9. The presidential election was scheduled for July 4 but was cancelled because no candidates were presented. No date has been set for a future election. The protests continue despite Algerian lawmakers electing an opposition figure, Slimane Chenine, as new Chairman of Parliament on July 10.
July 19, 2019

MOROCCO – Morocco’s Public Debt Drops to USD 34.12 bn in March 2019
According to figures released by the Moroccan Ministry of Economy and Finance, Morocco’s external public debt in March 2019 was USD 34.12 bn, or 29.5% of Gross Domestic Product. The figures show a drop of 1.4% compared to March 2018. Nearly half of Morocco’s debt, 48.6%, comes from international institutions including the World Bank and the International Monetary Fund. Bilateral lending agreements make up 28% (of which 18.5% from European countries). 23.4% of the debt comes from banks.
July 1, 2019

TUNISIA – National Statistics Body Announces a Drop in Foreign Trade Volumes in First Half of 2019
The National Institute of Statistics has released its June 2019 international trade figures. During the first half of 2019, Tunisia’s foreign trade volumes decreased, with a 5.1% decrease in export volumes and a 5.2% decrease in import volumes compared to the same period last year. By sector, export volumes dropped by 4.2% for the textile and leatherwear sector, 5.2% for the energy sector, and 20.2% for the agriculture sector. Phosphate exports saw a slight 0.4% increase. Import volumes dropped by 8.9% in the mechanical and electrical sector. Energy imports increased however by 6.2%.
July 16, 2019

TUNISIA – IMF Recommends that Tunisia Reduce its Budget Deficit and its Inflation Rates
The International Monetary Fund (IMF) was in Tunis from July 11 to 17 to discuss a reform program for Tunisia’s economy with Tunisian Ministers. The IMF found there had been an increase in the risks that could affect Tunisia’s 2019 economic situation. IMF identified the following risk factors: an increase in the value of the Tunisian dinar, an increase in the price of petrol, and a growth slow-down for Tunisia’s main economic partners. “Reaching the budget deficit objective of 3.9% of GDP is crucial in order to limit the accumulation of public debt, which has already reached 77% of GDP at the end of 2018,” warned the IMF.
July 17, 2019 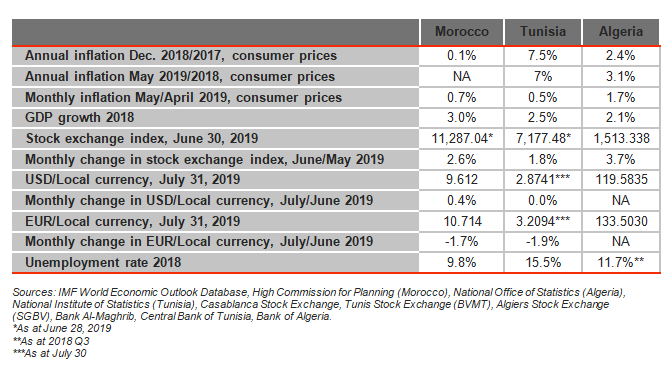