MOROCCO – Government to Sell 8% of Its Shares in Maroc Telecom

More than ten bids have been made for the purchase of the Bombardier factory in Casablanca, has said the Moroccan Minister of Industry, without revealing the bidders’ names. The bidding period has been extended, he added. In May, Bombardier declared its plan to sell its aeronautical assets in Morocco and Northern Ireland. The Moroccan Minister for Industry reassured at the time that the Casablanca factory would continue to operate after the sale. June 17, 2019

The consortium led by French company EDF Renouvelables and made up of Masdar (a renewable energy project developer from the UAE) and Green of Africa (a Moroccan joint venture) has won the bid for the Noor Midelt I solar project. Noor Midelt I is an 800 MW solar project in north-eastern Morocco. It will be made up of two plants combining thermosolar and photovoltaic technology, with a storage capacity of 5 hours. Construction is due to start in late 2019. Noor Midelt I is valued at approximately USD 782 mn. May 22, 2019

The president of the Tunisian Federation for Textile and Clothing (FTTH) has announced the textile industry saw a 5.6% growth in May 2019, compared to May 2018. Earlier this year, the government, the FTTH and the Tunisian Union for Industry and Commerce signed an agreement to promote Tunisia’s textile industry. The government pledged to create 50,000 jobs by 2023, and to make Tunisia one of the top five textile exporters to the European Union, reaching a 4% market share (up from the current 2.5% share). June 13, 2019

American company KBR has won the engineering design contract for the redevelopment of the Rhourde el Khrouf oil and gas plant. The project will be executed from KBR’s London and Chennai offices over an eight month period. KBR was awarded the contract by the joint venture between Algerian state company Sonatrach and the Spanish oil and gas producer Cespa. In January 2018, Cespa agreed to invest USD 1 bn to redevelop Rhourde el Khrouf, boosting production through the construction of an LPG processing plant with a capacity of 10,000 barrels per day. May 22, 2019

The Moroccan Minister for Foreign Affairs has stated he did not discuss the Deal of the Century, the U.S. plan to resolve the Israeli-Palestinian conflict, with Jared Kushner, Sr. Advisor to the U.S. President, during his visit to Rabat on May 28. “Morocco does not know yet of the content of any peace plan and will express its position once informed of the details of the initiative,” the Minister Nasser Bourita said. The Minister stated that the meeting with Kushner focused on the “bilateral relations between the two countries, as well as recent developments in the region.” June 8, 2019

The Moroccan court has ordered an enquiry into the death of Abdellah Hajli, who died from injuries he received following the dispersal by police of a protest by school teachers in Rabat. Throughout February, March and April, thousands of teachers protested in Rabat against employment conditions in public schools, and demanded the Prime Minister and Minister for Education step down. Police used water cannons to disperse multiple sit-ins of up to 10 000 protesters outside the parliament in Rabat.  May 28, 2019

The parliament has passed an amendment to its electoral law, which has resulted in barring Nabil Karoui, the candidate currently topping the polls, from running for president in the November elections. Karoui owns the private TV station “Nessma,” which is known for criticizing the government. In April, the government took Nessma off air, accusing it of breaching broadcasting rules. The suspension sparked debate over whether it was in fact a move to silence the station’s criticism of the ruling party. June 18, 2019

The Algerian Constitutional Council has cancelled the presidential election scheduled for July 4, asking interim president Abdelkader Bensalah to set the election for a later date. Algerians have been protesting for almost four months, demanding Bensalah’s resignation and an end to the dominance of the ruling elite. Protesters deemed the planned elections illegitimate because they were engineered by the elite put in place by Algeria’s ousted leader Bouteflika. June 2, 2019

TUNISIA – Drop in Foreign Investment During the First Quarter of 2019

In its latest weekly global markets analysis report, Credit Agricole finds Algeria’s economic position to be “very difficult” due to significant political risks affecting the country. The bank warns that political instability may persist as the country’s new leaders will have to address an economic crisis which is expected to intensify in the medium term. June 14, 2019

Foreign direct investments in Algeria increased to USD 1.5 bn in 2018, up from just over USD 1 bn in 2017. According to the report by the UN Conference on Trade and Development, this increase is due to the “investments in oil and gas and the automobile industry.” June 13, 2019 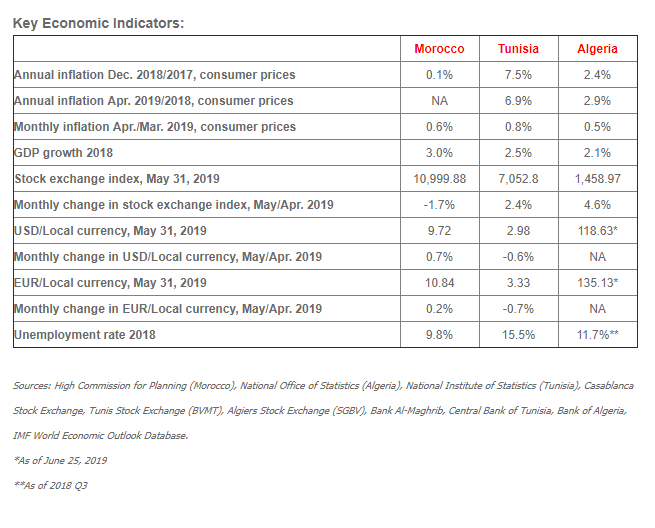