MOROCCO – Spanish-Moroccan Joint Venture to Build 100 Petrol Stations
Spanish company CEPSA has signed a joint venture agreement with Moroccan company Derhem Holding for the development of 100 new petrol stations across Morocco over the next five years. The project, valued at USD 133 mn, will also include the construction of a petrol stocking terminal at the Jorf Lafsar Port, one of the largest ports in Morocco. Cespa stated in a press release that “Morocco, where the company has been operating for more than three decades, is one of the key countries of [Cespa’s] 2030 strategy.”
October 21, 2019

MOROCCO – Russian Development Bank to Fund an Oil Refinery in Northern Morocco
Moroccan company MYA Energy has signed a deal with Russian state development cooperation VEB for the construction of a USD 2.3 bn oil refinery in Nador in northern Morocco. The refinery’s estimated initial capacity is 100,000 barrels per day, with a final target of 200,000 barrels per day at full operating capacity. The refinery will use Russian refining and storage technology, stated MYA Energy in a press release. Morocco’s only other refinery, SAMIR, shut down in 2015.
October 23, 2019

MOROCCO – Morocco Moves Up Seven Places in World Bank’s Doing Business 2020 Report
Morocco now ranks 53rd out of 190 nations, ahead of all other African states except Rwanda. According to the World Bank, Morocco’s improvement is because, amongst other things, Morocco has made paying taxes “less costly” by reducing the corporate income tax rate. Morocco has also made trading across borders faster by introducing e-payment of port fees, streamlining paperless customs clearance, and extending port hours of operation. Morocco also made property registration faster by reducing the time needed to obtain a non-encumbrance certificate.
October 24, 2019

TUNISIA – Tunisian Company Euro-Cycles Signs Export Deal With US Company JB Imports
The Tunisian bicycle and accessories manufacturer Euro-Cycles has signed a contract with the Florida-based company JB Imports to supply bicycles. An initial 1,000 bicycles will be exported to the US under the pilot phase of the contract, ahead of further transactions in 2020. Euro-Cycles also signed a contract with French multinational Decathlon in May 2019, with the first shipment of bicycles due to be exported this month.
October 1, 2019

The adjustment of the Tunisian-Turkish trade balance is “one of my priorities and I am personally working on projects that we will announce in the next few weeks or months,” Turkey’s Ambassador in Tunis Ali Onaner has stated. The trade balance deficit between Turkey and Tunisia reached approximately USD 640 mn in September 2019. “Turkey’s investments in Tunisia will edge up,” Onaner stated. “I am currently working with several investors who are in different phases of their future investments in Tunisia,” he explained. “We will encourage the import of industrial machineries from Turkey, that would help increase Tunisia’s exports tenfold in the long term,” he said. Onaner also stated he had “concrete projects to facilitate and encourage Tunisia’s exports to Turkey,” he added.
October 19, 2019

ALGERIA – Peugeot Factory to be Operational by First Half of 2020
The Minister for Industry and Mines has announced that construction of the Peugeot factory is currently underway and that the plant will be operational by the first half of 2020. PSA Group launched works on the site at Tafraoui on July 21 this year. The factory will have an annual production capacity of 75,000 vehicles (Peugeot, Citroen, Opel and DS Automobiles). The Minister also stated that a number of contracts for the production of automobile parts and accessories would be signed by the end of 2019. A number of proposals were rejected on the basis of “non-conformities” with legal requirements the Minister added.
October 26, 2019

MOROCCO – US Secretary Pompeo and Moroccan Foreign Minister Bourita Meet in Washington
Pompeo and Bourita met at the US State Department in Washington to discuss areas for future US-Moroccan cooperation. Pompeo and Bourita reiterated their commitment to a closer economic partnership and to maximizing the US-Morocco Free Trade Agreement. They also emphasized Morocco’s potential to serve as a platform for American firms doing business in Africa.
October 22, 2019

TUNISIA – UK and Tunisia Sign a Continuity Agreement Ahead of Brexit
The agreement will ensure British businesses and consumers benefit from continued access to the Tunisian market after Brexit. It provides, among other trade benefits, tariff-free trade of industrial products together with liberalization of trade in agricultural, agri-food and fisheries products. “We look forward to more British and Tunisian companies doing business with each other, investing and operating in the UK and Tunisia as a result of this agreement,” Tunisian Ambassador to the United Kingdom Nabil Ben Khedher said. The trading relationship between the UK and Tunisia was worth USD 485 mn in 2018, an increase of 3.0% on the previous year.
October 4, 2019

TUNISIA – Kais Saied Sworn in as New President of Tunisia
Kais Saied, a political outsider and retired law professor, has been sworn in as president after he won a landslide victory with 72.71% of votes at the October 14 election. Saied wants to introduce a new form of direct democracy where Tunisians elect small local councils based on the character of their representatives rather than party or ideology. The councils would in turn choose regional representatives who would choose national ones. Saied has socially conservative politics. He opposes equality of sexes under inheritance law and is in favor of the death penalty. He is a hardline opponent of any forms of ties with Israel.
October 23, 2019

ALGERIA – 22 Candidates Submit their Application for the Upcoming Presidential Poll
The electoral authority has announced that 22 candidates have submitted their application to run in Algeria’s presidential vote scheduled on December 12, eight months after former President Abdelaziz Bouteflika resigned following mass protests. Protests have continued every Friday since, with the Algerian people demanding the resignation of all politicians with ties to the Bouteflika regime. On September 29, the Algerian army chief Gaid Salah announced that the military would not back any candidate in the presidential polls. “We affirm that only the people will pick the next president through ballot boxes, and the army will not support anyone,” the Defence Ministry stated.
October 27, 2019

MOROCCO – S&P Global Upgrades Morocco’s Debt Rating to “Stable”
Rating agency S&P Global has upgraded the outlook for Morocco’s long-term debt rating in foreign and local currency from “negative” to “stable.” The stable outlook reflects expectation that fiscal consolidation will continue over the next few years, which will help stabilize debt. “We could raise the rating if budgetary consolidation prospects materially improve or the ongoing transition toward a more flexible exchange rate that targets inflation significantly bolsters Morocco’s external competitiveness and ability to withstand macroeconomic external shocks,” said S&P in a note. The agency also confirmed Morocco’s investment grade status as “BBB-.”
October 7, 2019

MOROCCO – World Bank Predicts Morocco’s GDP to Grow 2.7% in 2019 and 3.3% in 2020-21
The World Bank’s report on Morocco’s economy predicts a slowdown in GDP growth rate in 2019 to 2.7%. “The Moroccan economy is functioning below its potential,” states the report. It blames the slowdown on a drop in agricultural production. The 2019 Finance Bill, enacted last year, projected a growth rate of 3.2% in 2019. The World Bank report notes however an improvement in Morocco’s non-agricultural sector (3.4% increase in 2019, up from 3% in 2018), in particular in the phosphate, chemical, and textile sectors. The report also projects that GDP growth will increase to 3.3% in 2020-21, supported by “substantial foreign investment,” particularly in the automotive sector. The Peugeot factory in Morocco is expected to double its production capacity over this time.
October 9, 2019

TUNISIA – FATF Removes Tunisia from Global Anti-Money Laundering Risk List
The Financial Action Task Force (FATF), the global standard-setting body for anti-money laundering (AML) and combating the financing of terrorism (CFT), has removed Tunisia from its list of high risk countries. The FATF congratulated Tunisia for the “significant progress made in addressing the strategic AML/CFT deficiencies.” Tunisia will no longer be subject to the FATF’s monitoring under its on-going global AML/CFT compliance process.
October 18, 2019

ALGERIA – World Bank Expects Algeria’s 2019 Growth Rate at 1.3%
The World Bank has announced that it expects Algeria’s economy to grow by 1.3% this year, down from 1.5% in 2018 and lower than the government’s forecast of 2.6%, due to “political uncertainty.” “As economic activity is expected to be impacted by the political course, it is also expected that more resources will be directed to social measures, at the expense of public investment spending,” the World Bank said in a country note. Algeria plans to cut public spending by 9.2% and keep subsidy policy unchanged in 2020, while seeking foreign loans to fund economic projects and cope with pressure on state finances.
October 10, 2019

ALGERIA – Algeria’s Trade Deficit Rises After Drop in Energy Revenue
Algeria’s energy revenue dropped 11.91% in the first eight months of 2019, causing the country’s trade deficit to rise by USD 1.63 bn from the same period a year earlier. Oil and gas exports, which accounted for 92.82% of total sales abroad, reached USD 22.55 bn, down from USD 25.60 bn in the first eight months of 2018. As a result, the trade deficit rose to USD 4.68 bn from USD 3.05 bn in the January-August period of last year.
October 19, 2019 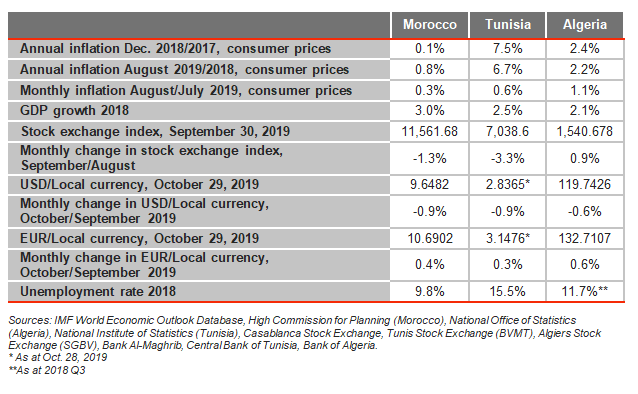