Japanese automotive parts supplier Yazaki has announced its plan to strengthen its presence in Morocco, opening a new plant in Kenitra in January 2020. The company already has three factories in Morocco, with over 12,500 employees. Yazaki’s Senior Managing Director stated that the company intends to employ 2,500 people at the new factory. Business in Morocco is going “very well” he told a Moroccan news source. Yazaki’s main clients are Renault and PSA Group.
September 2, 2019

MOROCCO – Italian Automobile Component Company Proma Opens Factory in Kenitra
Proma, an Italian group specializing in the design and manufacturing of metal components and sub-assemblies for the automotive industry, inaugurated the USD 33 mn factory in Kenitra on September 17. Proma will supply parts to both Renault and PSA Group. The factory has an expected annual turnover of USD 26 mn. The factory was built in six months, a “record for Morocco” said the Moroccan Minister for Industry at the inauguration.
September 17, 2019

TUNISIA – Nawara Gas Field to Begin Operations in Coming Weeks
The Tunisian Minister for Industry has announced that the Nawara gas field will begin operations in the coming weeks, reports the Tunis Afrique Presse (TAP). The field will increase national natural gas production by 50% and will reduce gas imports by 30%, the Minister stated, adding that the exploitation of the Nawara field would reduce Tunisia’s energy balance deficit by 20% and the trade deficit by approximately 7%. The field is jointly owned by Austria’s OMV and the Tunisian National Oil Company ETAP, with an investment of USD 700 mn.
September 20, 2019

ALGERIA – Chinese Tire Manufacturing Company Doublestar to Launch Algerian Operations
In its half year statement, the Hong Kong company Doublestar International announced the signature of an agreement earlier this year with Algeria’s Sarl El Hadj Larbi Pneumatiques for a joint venture tire manufacturing project in Algeria. The project will have a 2 million unit annual capacity for truck and bus tires and a 5 million annual unit for passenger car tires. Doublestar will invest USD 5 mn towards the project, while the Algerian firm will inject USD 24 mn. The location of the plant in Algeria has not been disclosed.
September 11, 2019

ALGERIA – Sonatrach and Turkish Company Ronesans to Build a Petrochemical Complex
Algerian national oil company Sonatrach and Turkish company Ronesans signed a contract on September 26 in Istanbul for the construction of a petrochemical complex in Ceyhan, Turkey. The complex will convert propane to polypropylene and will have a production capacity of 450,000 tons of polypropylene per year, the Algerian Minister of Energy announced in a statement.
September 26, 2019

MOROCCO – Turkish President Tayyip Erdogan to Visit Morocco
According to a statement by Turkish Foreign Affairs Minister Mevlut Cavusoglu, Erdogan has received an invitation from King Mohammed VI to visit Morocco. Cavusoglu announced the invitation for a presidential visit after meeting with Morocco’s Minister of Foreign Affairs Nasser Bourita on the sidelines of the 74th UN General Assembly in New York. The date of the visit has not yet been announced.
September 23, 2019

TUNISIA – Second Round of the Presidential Election to Take Place on October 13
The Tunisian Electoral Commission has announced that the second round of voting in Tunisia’s presidential election will be held on October 13. The two presidential candidates are law professor Kais Saied, and the media mogul Nabil Karoui. Both seen as outsider candidates, they were successful in the first round of voting held on September 15. Neither candidate has ever held political office. Karoui is under investigation on charges of money laundering and tax evasion and has been in pre-trial detention since August 23.
September 27, 2019

ALGERIA – Algeria Jails Top Political Figures of the Bouteflika Era
On September 25, the Algerian military court issued 15 year jail terms for “conspiring against the army” to Mohamed Mediene, Said Bouteflika, Bachir Tartag and Louisa Hanoune, all figureheads of the ruling elite under former president Bouteflika. It is the first judgement handed down to senior political figures since protests began in February. The Algerian presidential election is due to take place on December 12.
September 25, 2019

TUNISIA – Tunisia Sees a Slowdown in its Export Rate in the First 8 Months of 2019
Tunisian exports are on the rise, but at a slowing rate. According to the National Institute of Statistics, exports went up by 12% since last year, a drop from 20.2% in the previous period. Exports in the mining and phosphate sector increased by 26.8% this year, in the energy sector by 19.1%, in the mechanical and electrical sector by 16.9%, and in the textile and leather sector 9.6%. On the other hand, the food industry sector experienced a 12.9% drop in exports, due to a drop in olive oil sales. 74.4% of Tunisia’s exports went to Europe. It’s main export partners are Germany, Italy, and France.
September 25, 2019 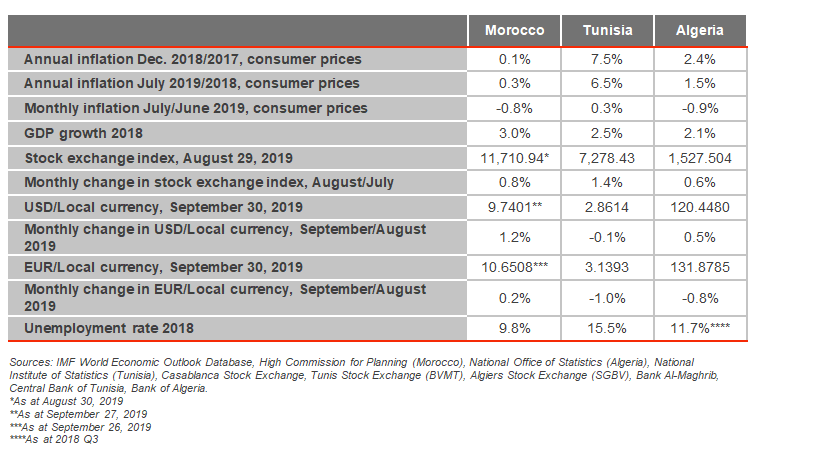