Kalmar, a subsidiary of the Finnish cargo-machinery handling company Cargotec has signed an agreement with the Moroccan container terminal EUROGATE Tanger to upgrade the capabilities of four ship-to-shore (STS) cranes. The upgrade involves increasing the crane heights and extending the booms, enabling the EUROGATE Tanger terminal to serve Ultra Large Container Ships with a capacity of 23,000 TEUs. The upgrade is scheduled to be completed in Q2 2021.

The Tunisian Head of Government inaugurated the “Rades C” power plant on July 30. The plant is a 450 MW natural gas-fired plant 10 km east of Tunis. Valued at USD 345 mn, it is expected to produce 8% of Tunisia’s electricity needs. The plant was built by the Tunisian Company of Electricity and Gas (STEG) and financed by the Japanese Agency for International Cooperation (JICA).

ALGERIA – Bellara Steel Complex to be Fully Operational by November 2019

The Bellara steel complex in Jijel is due to be inaugurated by end of November 2019, the Ministry of Industry and Mines announced in a press release. The complex is a joint project between Algerian company Sider and Qatar Steel International, valued at USD 2 bn. Once operational, the complex is expected to produce up to 5 million tons of steel bar and wire per year, destined for the construction industry.

The state energy company Sonatrach is maintaining its annual output, ‘but everything else is completely frozen including talks with Exxon and Chevron,” a Sonatrach source told Reuters. “There is no visibility for the short term as politics not economics is at the top of the agenda for now,” the source added. Algeria had planned to introduce a new energy law in the first half of 2019 in a bid to attract foreign investors, but the ongoing political crisis stalled the process.

MOROCCO – Government and Medical Students Sign Agreement, Ending 5 Months of Protests
On August 28, the National Commission for Medical Students and the Moroccan government signed an agreement officially ending massive nationwide protests by medical students.  Since March, thousands of students have boycotted classes and protested in front of the parliament in Rabat against poor medical training conditions in public hospitals, and the government’s decision to privatize medical education. As a result of extensive negotiations, 15 of the 16 requests by the student representative body were approved by the government.

Media mogul Nabil Karoui, one of the presidential frontrunners for the Tunisian election scheduled on September 15, was arrested on August 23 for money laundering and tax evasion. Karoui’s party has criticized the arrest, calling it a politically motivated attempt to exclude Karoui from the election race. Despite his arrest, Karoui remains a candidate for the election. Tunisia’s electoral commission approved 26 candidates for the presidential election, which was brought forward to September 15 following the death of former president Beji Caid Essebsi on July 25.

MOROCCO – Morocco’s Trade Deficit Increases in First Half of 2019

Morocco’s unemployment rate dropped to 8.5% in the second trimester of 2019, down from 9.1% at the same time last year. According to figures from the High Commission for Planning, major job losses in rural areas (125,000 jobs lost since the same period last year due to drought conditions affecting farming activities) were offset by the creation of 132,000 jobs in urban centres. Overall, a balance of 7,000 additional jobs were created over T2 2019. This figure indicates however a major slowdown in job creation rates in Morocco: at the same time last year, a balance of 117,000 new jobs were created. 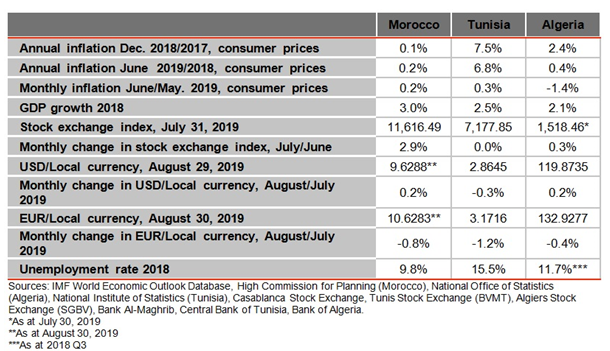