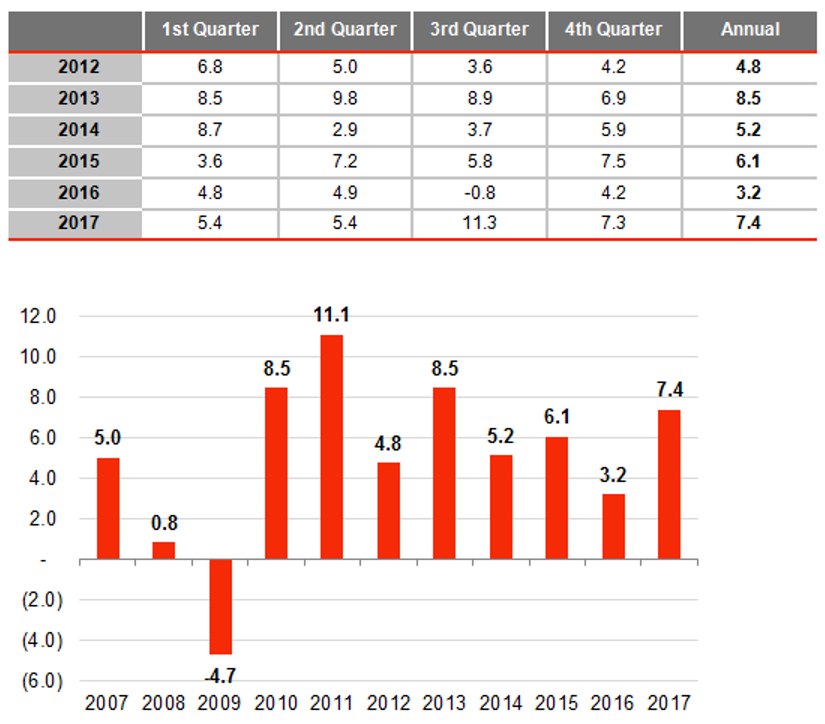 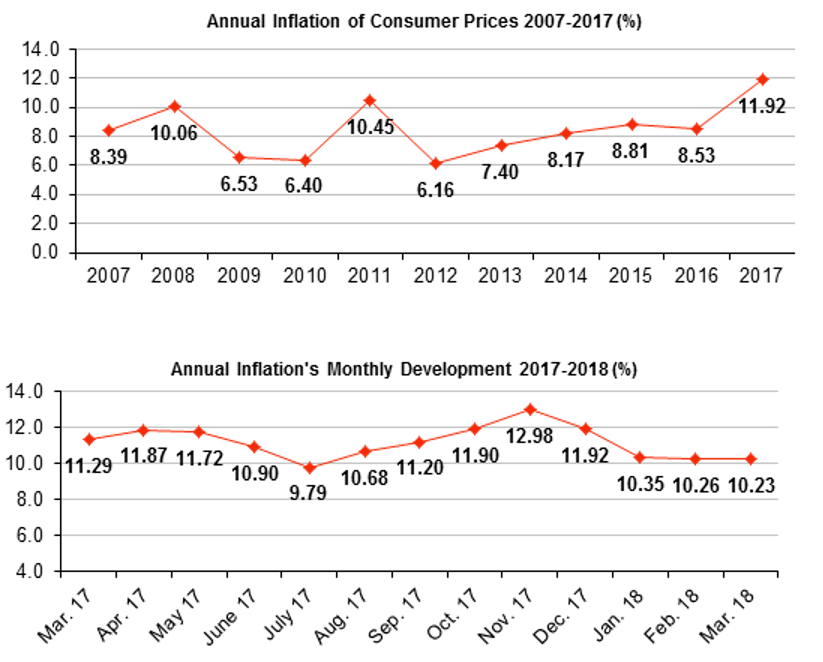 Inflation continues to be double-digit
In March 2018, consumer prices in Turkey increased by 0.99% in comparison to the previous month, and by 10.23% over the same month of the previous year (YOY). The highest monthly increase was registered in food and non-alcoholic beverages (2.03%), followed by health (1.90%). No monthly decrease took place in the main product groups in March. The highest annual increase was in furnishing and household equipment (15.41%). The domestic producer price index (D-PPI) increased by 14.28% YOY, and 1.54% monthly.
April 3, 2018

7.4% economic growth in 2017
In the fourth quarter of 2017, Turkey’s GDP grew in line with expectations, by 7.3% compared with the same period of the previous year. Accordingly, the annual growth in 2017 was announced as 7.4%. This has been the strongest growth performance of the Turkish economy since 2013. The increase in domestic consumption and investments supported by incentive measures were the main reasons of the high growth, along with the low base-year effect of 2016 where Turkey experienced a comparatively low growth. Accordingly, the GDP at current prices reached TRY 3,104.9 bn in 2017, whereas it decreased by 1.4% to USD 851.1 bn in dollar terms due to the depreciation of the Turkish Lira. Therefore, the GDP per capita fell to USD 10,597. The services sector grew by 10.7%, industry by 9.2%, construction by 8.9%, and agriculture by 4.7%.
March 29, 2018

Turkey-EU summit held in Varna
At the press conference following the meeting with Turkey’s Prime Minister Binali Yıldırım in Berlin, German Chancellor Angela Merkel expressed the wish to intensify contacts with the Turkish government even though she sees many obstacles in front of the normalization of relations. The main topics of the talks were the fight against terrorism, the case of Deniz Yücel, a correspondent for the newspaper Die Welt, who had been arrested in Istanbul a year ago on terror propaganda charges, and the refugee situation. One day after the meeting, Mr Yücel was released from jail and left the country.
Feb. 16, 2018

An agreement has been reached for a co-operation between Algeria’s national energy company Sonatrach and Turkish private companies Rönesans and Bayegan to build a petrochemicals plant for USD 1 bn in Yumurtalık Free Zone, Adana province. As President Erdoğan stated, the plant, with a planned production capacity of 450,000 tons polypropylene per year, is to reduce Turkey’s dependence on petrochemicals imports by 25%.
March 2, 2018

Alex Dimitrief, President & CEO, Global Growth Organization of General Electric, has stated that Turkey remains one of the priority countries among GE’s investment destinations, even after Moody’s has cut Turkey’s rating. Dimitrief pointed out that Turkey’s surging middle class is boosting the economy, the young population provides a huge potential, and the public sector endeavours to create a quality environment in the healthcare, transportation and energy sectors. He added that his company is currently following investment opportunities in the healthcare industry, and that they have been working on the digital transformation of the plant in Gebze (Province of Kocaeli), which could be a model for GE plants all over the world. GE has been present in Turkey for 70 years in various industries such as energy, healthcare, aviation, and renewable energies.
March 14, 2018

A legislative package including new incentives designed to boost production, investment and employment has been approved by the Turkish parliament. Accordingly, employers will be able to benefit from several premium supports if they hire unemployed people registered with the Turkish Employment Agency (İŞ-KUR) between January 1, 2018 and December 31, 2020. Besides that, until Dec. 31, 2019, a VAT exemption for the purchase of new machinery and equipment to be employed in R&D activities as well as in the manufacturing industry, without the obligation of an investment incentive certificate, has been introduced.
March 23, 2018

The media companies of Doğan Group, Turkey’s leading media group, have been sold to Demirören Group for USD 916 mn. Consequently, several companies, including Hürriyet newspaper and CNN Türk TV, have been transferred to the new owner Demirören, which had already acquired Milliyet and Vatan newspapers from Doğan Group in 2011.
March 23, 2018

The first tracks of the high-speed railway between the cities Ankara and Sivas have been laid in an official ceremony. The 405-km line is planned to be in operation in 2019. During the ceremony, Ahmet Arslan, Turkish Minister of Transport, Maritime Affairs and Communications, stated that the travel time between Ankara and Sivas shall be cut to 2 hours, from currently 12 hours, and down to 5.5 hours between Istanbul and Sivas. It was also announced that, according to schedule, the railway line between Ankara and Izmir is to be completed by 2020.
March 26, 2018

Socar, Azerbaijan’s state-owned national oil and gas company, has disclosed the investment volume of the new petrochemicals complex to be built in Aliağa (province of Izmir) as USD 2 bn. Zaur Gahramanov, CEO of Socar Turkey, stated that the infrastructure and engineering works for this investment still continue, and the plant is scheduled for commission in 2023. Socar already owns Petkim, Turkey’s leading petrochemicals company, also located in Aliağa, and is currently investing USD 6.3 bn in the Star refinery, next to Petkim, which is set to start production in September 2018.
March 28, 2018

Food multinational Mondelez has announced the move of its chewing gum production line from St. Genest, France, to Gebze, Turkey, in 2018. According to İhsan Karagöz, General Manager of Mondelez Turkey, this shift is to increase their annual production by 1,200 tons, and provide them with the opportunity to produce for all of Europe, thus becoming an export hub in the region. Mondelez’s chewing gum and confectionery plant with the largest capacity is located in Turkey, and the company plans to make TRY 42 mn investments in 2018.
March 29, 2018