Varroc Lighting Systems, a U.S.-based supplier of exterior vehicle lighting systems, has acquired Turkish automotive lighting manufacturer Sa-Ba. Boasting more than 40 years of experience in interior and exterior small lighting products, Sa-Ba has its plant in Tuzla, a district of Istanbul, and a second plant in Bulgaria is under construction. Stephane Vedie, President and CEO of Varroc Lighting Systems, commented that “Turkey is a growing market, and our presence there helps us expand the services we can provide to our growing customer base, while substantially increasing our capabilities in small lighting.” July 2, 2018

Enterprise, America’s largest car and truck rental company, has announced to make a TRY 1 bn investment in Turkey in 2018. Targeting threefold growth in Turkey in the next five years, Enterprise plans to increase its local fleet from 10,000 to 30,000 vehicles, and the number of its offices to 150, up from 50. Enterprise has a three-year agreement with Turkish Airlines, which provides the company with the opportunity to offer services in all destinations of the airline. The company claims to have the largest fleet of high-segment cars, SUVs and hybrid vehicles in Turkey. July 16, 2018

German chemical corporation Evonik Industries has announced a new production line investment for precipitated silica manufacture in its Adapazarı plant, its joint venture with the Turkish chemical company Ege Kimya since 2002. The reason for this investment has been given as increasing demand from the tire industry in Turkey, the Middle East, and Europe. The new line, with 40,000 tonnes of annual production capacity, is scheduled to be commissioned in 2020. June 29 – July 18, 2018

The global logistics giant UPS is building a gateway at Istanbul’s new airport. Daniel Carrera, President of UPS East Europe, stated that Turkey is the right market to invest in, and that company acquisitions are also on their agenda. Carrera said that in addition to the gateway, which is to become a large airway hub in the new airport, UPS is also having a transfer centre built in Istanbul. UPS is already operating in all 81 provinces of Turkey with 2,100 local employees. July 19, 2018

The Italian company Sabaf, a manufacturer of components for household cooking appliances, has acquired the Turkish manufacturer of electronic modules for the white goods industry, Okida, for USD 27 mn. Sabaf has already been active in Turkey through its subsidiary since 2011, obtaining a market share of 50%. Okida, operating out of Istanbul with 80 employees, exports its products to more than 20 countries. July 26, 2018

USA imposes sanctions on Turkey
In a row over the detention of Andrew Brunson, an American pastor who has been detained in Turkey for two years pending trial on charges such as espionage, the U.S. administration has frozen the American bank accounts of two Turkish ministers. Furthermore, the U.S. Congress has blocked the delivery of F-35 fighter jets to Turkey in response to its NATO partner’s decision to purchase Russian S-400 air defence missile batteries. President Trump has also announced that the tariff on aluminium imports from Turkey shall be increased to 20%, and the tariff on steel imports to 50%. Turkey has retaliated by doubling tariffs on American goods in 22 product groups.
Aug. 2 – 16, 2018

State of emergency has ended after two years
Turkey’s state of emergency, introduced as from July 21, 2016 following the coup attempt, which granted the government extraordinary authority far beyond the fight against terrorism, has not been extended. In lieu, a new bill giving extensive powers to provincial governors regarding public safety and order has been adopted by the Turkish parliament.
July 18 – 25, 2018

Inflation continues to accelerate
In July 2018, consumer prices in Turkey increased by 0.55% in comparison to the previous month, and by 15.85% over the same month of the previous year (YOY), which is a new record high since 2003. The highest monthly increase was registered in hotels, cafés and restaurants (2.26%), ahead of furnishing and household equipment (1.82%). The highest monthly decrease took place in clothing and footwear (-3.07%), followed by food and non-alcoholic beverages (-0.28%). The highest annual increase was in transportation (24.21%). The domestic producer price index (D-PPI) increased by 25.00% YOY, another record high since 2003, and 1.77% monthly.
Aug. 3, 2018

Turkish Central Bank keeps the interest rate stable
The Central Bank of the Republic of Turkey has kept the policy rate (one week repo auction rate) constant at 17.75%. The bank reported that the external demand maintains its strength, but signs of deceleration in domestic demand become more visible. Besides that, the high inflation and inflation expectations create a risk on pricing behaviour. Hence, the bank has decided to maintain its tight monetary policy.
July 24, 2018

Turkish Lira plummets against strong currencies
On Aug. 10, the Turkish currency depreciated against the US dollar by 22% on a single day hitting all-time lows against both dollar and Euro. The parties had been unable to reach an agreement on mutual demands during the recent visit of a Turkish delegation to Washington, fuelled by concerns about possible further sanctions and Turkey’s macroeconomic outlook. In an effort to calm the situation, the Turkish Central Bank has declared that the liquidity required by Turkish banks shall be provided.
Aug. 13, 2018 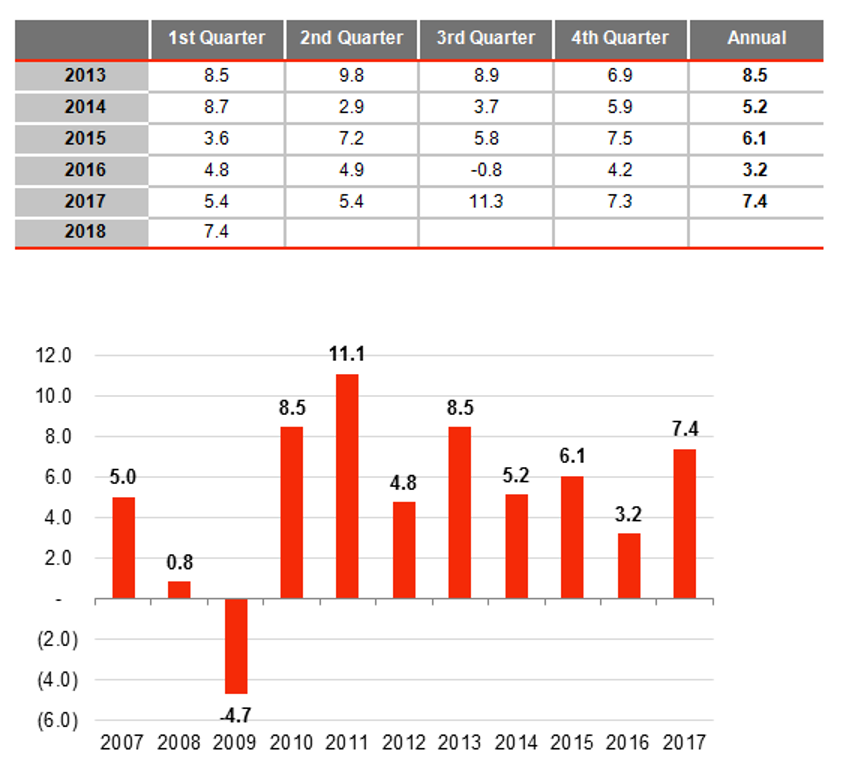 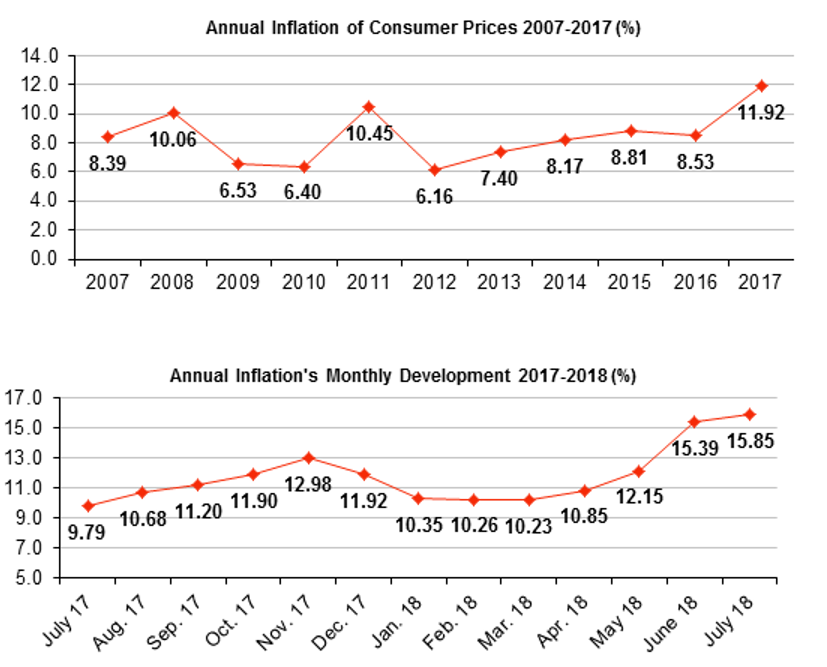