Turkish passenger car and LCV sales decrease 45% in the first six months
The sales volume of passenger cars and light commercial vehicles (LCV) in the domestic market has decreased by 44.7%, down to 195,144 units, in the first half of 2019. The decrease in the LCV segment (-50.0%) was still higher than in the passenger car segment (-43.3%). The main reasons for the contraction in the domestic market have been the increase in the exchange rate and the interest rates.
July 3, 2019

Borled to produce for Sylvania
Turkish Borsan Elektrik ve Aydınlatma (Borled) has agreed with London-headquartered global lighting company Sylvania to produce 120,000 lighting products per year for TRY 2 mn. Located in Samsun on the Black Sea, Borled has a monthly production capacity of 880,000 units in plastics, and 750,000 units in sheet metal.
July 10, 2019

TIL Holding takes over Marport
Switzerland-headquartered container terminal operator TIL Holding has applied to the Turkish Competition Authority in order to obtain full control of the container terminal Marport, its partnership with Turkish Arkas Group. Established in 2001 following the acquisition of Armaport by its current owners, Marport operates seven docks and 51 cranes at Ambarlı Port, Istanbul.
July 24, 2019

Sanofi cooperates with Birgi Mefar for antibiotics
French pharmaceuticals manufacturer Sanofi, which has been active in Turkey for 65 years, has started a technology transfer project with Turkish company Birgi Mefar. Following a EUR 3 mn investment, an antibiotic product of Sanofi that had been produced only in Italy so far shall be produced also in Turkey, at Birgi Mefar’s facility in Tuzla, Istanbul, and exported to almost 40 countries. Pilot production shall take place in 2020.
July 30, 2019

First Turkish-manufactured electrical tractor introduced
Turkish President Recep Tayyip Erdoğan has introduced and test-driven the first Turkish manufactured electrical tractor in Polatlı (Ankara province). The new tractor, which can work 7 hours with 45 minutes charging time, is expected to decrease the diesel fuel cost of Turkish farmers by 95%. The prototype has been produced by Turkish company Derindere Motorlu Araçlar. Experts claim that in order for the project to be viable, state support is a must since the battery cost alone can be as high as USD 50,000.
July 26–30, 2019

Erdoğan inaugurates new Istanbul–Izmir highway
The last part of the new highway between Istanbul and Izmir, which is supposed to cut the travel time by private car between the two cities from 8.5 hours down to 3.5 hours, has been put into operation by President Erdoğan. The total length of the toll road is 426 km, the new section constituting 192 km thereof.
Aug. 4, 2019

New incentive to attract VW investment
President Erdoğan has issued a new decree amending the incentive conditions for automotive investments. Accordingly, companies investing in Turkey to produce minimum 100,000 automobiles shall be eligible for duty-free import of automobiles up to 1,600 cm3 as high as 15% of their production capacity. According to recent press reports, even though the final decision has not been taken yet, Turkey has a good chance of attracting the new investment planned by Volkswagen to produce Passat model passenger cars.
Aug. 9, 2019

Armed attack in Northern Iraq kills Turkish diplomat
One Turkish diplomat and two Iraqi citizens have been shot in an attack in a restaurant in Erbil, Iraq, targeting the employees of the Turkish consulate. The Iraqi Foreign Ministry strongly condemned the attack, and two suspects have been arrested by the Kurdistan Regional Government.
July 18–20, 2019

U.S. excludes Turkey from F-35 programme
After Russia began delivering S-400 missile systems to Turkey, the U.S. has removed Turkey from its F-35 fighter jet programme, stating that “the F-35 cannot coexist with a Russian intelligence collection platform”. The U.S. company Lockheed-Martin, which oversees F-35 production, stated that the involvement of Turkish companies would end by March 2020. Turkish suppliers had been in charge of the production of 937 components. The Turkish Ministry of Foreign Affairs argued that the S-400 system has no effect on the F-35, asking the U.S. to correct this “mistake”.
July 19, 2019

Russia and Azerbaijan lift visa requirements for Turkish citizens
Azerbaijan has lifted the visa requirements for all Turkish citizens from September 1 on, and Russia also no longer requires visa as of August 7, but limited to special and service passports, . Regular passport holders, however, shall continue to be obliged to obtain a visa for travel to Russia.
July 26, 2019

U.S. and Turkey agree on safe zone in Syria
U.S. and Turkey have agreed to establish a safe zone in northern Syria. The joint operation centre that is to manage the zone will be located in Turkey. The two countries have agreed that the safe zone should be a peace corridor and all necessary precautions would be taken to ensure the return of Syrians to their home country. The Syrian government has called the agreement an attack on the country’s sovereignty.
Aug. 9, 2019

Inflation accelerates
In July 2019, consumer prices in Turkey increased by 1.36% in comparison to the previous month. The CPI went up by 16.65% over the same month of the previous year (YOY). The highest monthly increase was registered in transportation (4.46%), ahead of furnishing and household equipment (4.24%). The highest monthly decreases took place in clothing and footwear (-3.20%), followed by food and non-alcoholic beverages (-1.11%). The biggest annual increases were in miscellaneous goods and services (26.93%), and furnishing and household equipment (25.41%). The domestic producer price index (D-PPI) decreased by 0.99% monthly, and increased by 21.66% YOY.
Aug. 5, 2019

Turkish Central Bank reduces interest rate
The Central Bank of the Republic of Turkey has reduced its policy rate (one-week repo auction rate) from 24.00% to 19.75%. According to the bank, there has been a moderate recovery in the economic activity, exports are increasing, and the tourism revenues are supporting the economic activity. The bank expects the disinflation trend as well as the improvement in financial conditions and the current account balance to continue, pointing to the increasing possibility that advanced economy central banks will take expansionary monetary policy steps.
July 25, 2019

Turkey levels down 2023 economic targets
In the 11th Development Plan prepared by the Turkish government, the targets for 2023, the 100th anniversary of the foundation of the Republic, have been levelled down. Accordingly, the expectations for 2023 were announced as USD 1.1 trillion for the GDP, USD 12,484 for the GDP per capita, USD 226.6 bn for exports, 9.9% for the unemployment rate.
July 10, 2019 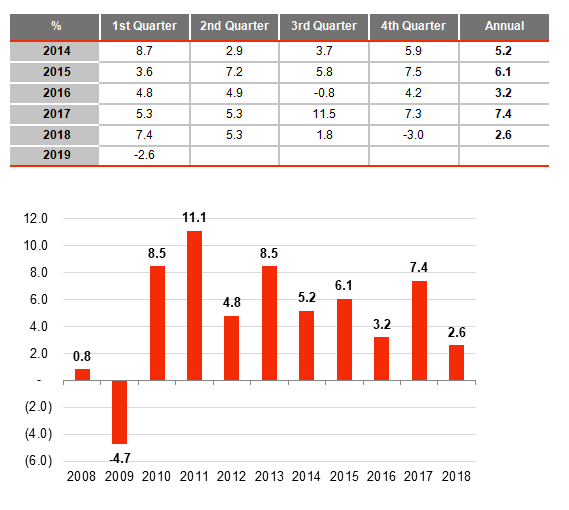 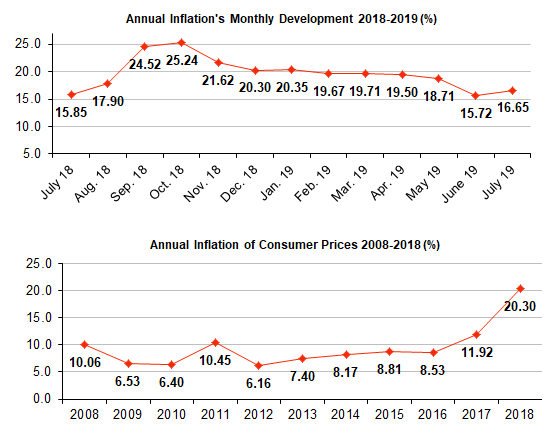