Prometeon announces USD 115 mn additional investment in Turkey
The Italian tyre manufacturing group Prometeon has announced a new investment in its plant located near İzmit (Kocaeli province). The company intends to make a USD 115 mn investment by 2020 to implement advanced technology and increase its capacity by 75%. With this investment, 30% of Prometeon’s global production is planned to be manufactured in Turkey, and the export volume of Prometeon Turkey is expected to reach USD 250 mn, double the current figure. Gregorio Borgo, Chief Operations Officer of Prometeon Tyre Group, stated that Turkey is an important management, production and competence centre for the Group, with Prometeon managing 75 countries in the MEA, Russia and CIS region from Turkey.
Nov. 6, 2018

Alternatif Bank opens new headquarters
Alternatif Bank, owned by The Commercial Bank, of Qatar, has inaugurated its new headquarters office building in Istanbul, located in the Vadistanbul complex. According to the bank’s chairman, Omer Alfardan, they have invested almost USD 1 bn in Turkey since the 2013 acquisition, and, having full confidence in Turkey and in the bank, they are determined to make new investments. Alternatif Bank, established in 1991, carries out its activities with almost 1,000 employees, 50 branches, and an asset size of almost TRY 30 bn.
Nov. 14, 2018

Qatari Mayhoola increases its share in Turkish retailer Boyner
11% of shares in Boyner Perakende have been sold to the Qatari investment fund Mayhoola for Investments LLC for TRY 117 mn. This stock purchase has increased Mayhoola’s share from 42.68% to 53.95%. Following the acquisition, 42.80% of the shares will remain with Boyner Holding, 1.11% with the Boyner family, and 2.24% as publicly quoted. With more than 500 retail stores nationwide, Boyner Group is one of the largest non-food and non-electronics retailers of Turkey.
Nov. 14, 2018

Canadian Busbud acquires neredennereye.com
Canadian travel ticket booking giant Busbud has acquired Turkish oldest online ticket sales platform neredennereye.com. Louis Philippe Maurice, Busbud’s CEO, stated that the acquisition will increase their market share in Turkey, and allow them to use neredennereye.com’s know-how in the 80 countries they operate in. He added that neredennereye.com has grown by 500% between 2014 and 2018. In the first 10 months of 2018, the platform served 25 million visitors.
Nov. 16, 2018

GE commissions R&D laboratory to develop aircraft engines
GE Aviation, a subsidiary of American multinational conglomerate General Electric, has commissioned its R&D laboratory in its technology centre in Gebze (Kocaeli province). 400 Turkish engineers work in the centre which has focused on advanced engineering and technology programmes for the needs of the aviation industry for 18 years. The R&D laboratory is to contribute to GE’s activities in the design and development of aircraft engine components in line with additive manufacturing technologies. Together with this new laboratory, GE has invested USD 15 mn in this technology centre so far.
Nov. 19, 2018

Offshore section of TurkStream completed
Turkish President Recep Tayyip Erdoğan and Russian President Vladimir Putin have attended the ceremony held for the completion of the offshore section of the TurkStream Project, a gas pipeline delivering Russian natural gas across the Black Sea to Turkey and then on to Europe. The construction of two pipelines, each 930 kilometres long, and built in parallel with each other on the sea floor, has been completed. The first line, designed for the Turkish market, is planned to meet 35% of Turkey’s natural gas consumption, whereas the second one will supply gas to countries in southern Europe. The capacity of each line is 15.75 billion cubic meters per year. The first gas delivery is planned for the end of 2019. Russia is Turkey’s top supplier for natural gas, with 29 billion cubic meters in 2017.
Nov. 20, 2018

BBVA appoints Turkish Executive Genç as CEO
The Spanish banking group BBVA (Banco Bilbao Vizcaya Argentaria), which is also the controlling shareholder of Turkish Garanti Bank, has appointed Onur Genç as their CEO. Genç said that this appointment goes to show that BBVA is a global bank. Genç worked for McKinsey & Company between 1999 and 2012, was Deputy General Manager of Garanti Bank from 2012 to 2017, and had been CEO and Country Manager of BBVA Compass in the USA since 2017.
Nov. 30, 2018

Erdoğan and Trump meet during the G20 summit
Turkish President Recep Tayyip Erdoğan has met several heads of state during the G20 summit in Buenos Aires, including the presidents of the USA and Russia. During their 50-minute meeting with U.S. President Donald Trump, the two leaders discussed the issues of Syria, U.S. support of the Kurdish YPG militia, the Manbij issue, and the Khashoggi murder. Mevlüt Çavuşoğlu, Minister of Foreign Affairs, and İbrahim Kalın, Presidential Spokesperson, also participated in the meeting.
Nov. 30 – Dec. 3, 2018

Growth of Turkish economy slows down in third quarter
In the third quarter of 2018, Turkey’s GDP grew by 1.6% compared with the same period of the previous year. The main factor of growth was the increase in net exports, supported by the depreciation of the Turkish lira, whereas the contribution of consumption expenditures was relatively weak, and investment expenditures contracted. The quarterly GDP at current prices reached TRY 1,013.5 bn, but decreased to USD 187.1 bn in dollar terms due to the depreciation of the Turkish lira. Agriculture grew by 1.0%, industry by 0.3%, and the services sector by 4.5%, whereas the construction industry contracted by -5.3%.
Dec. 10, 2018

Turkish Central Bank keeps interest rate constant
The Central Bank of the Republic of Turkey has kept its policy rate (one week repo auction rate) constant at 24.00%. According to the bank, the rebalancing trend in the economy has become more noticeable and the external demand maintains its strength, but the slowdown in the economic activity continues. The statement also said that even though the developments in import prices and domestic demand conditions have led to some improvement in the inflation outlook, risks on price stability continue to prevail. Hence, the bank has decided to maintain its tight monetary policy.
Dec. 13, 2018 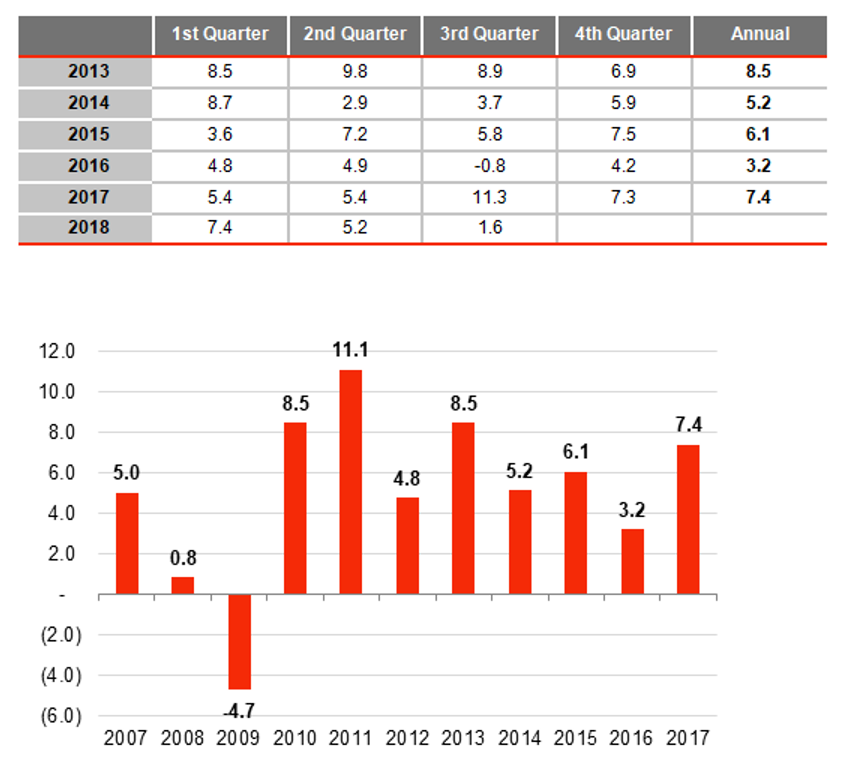 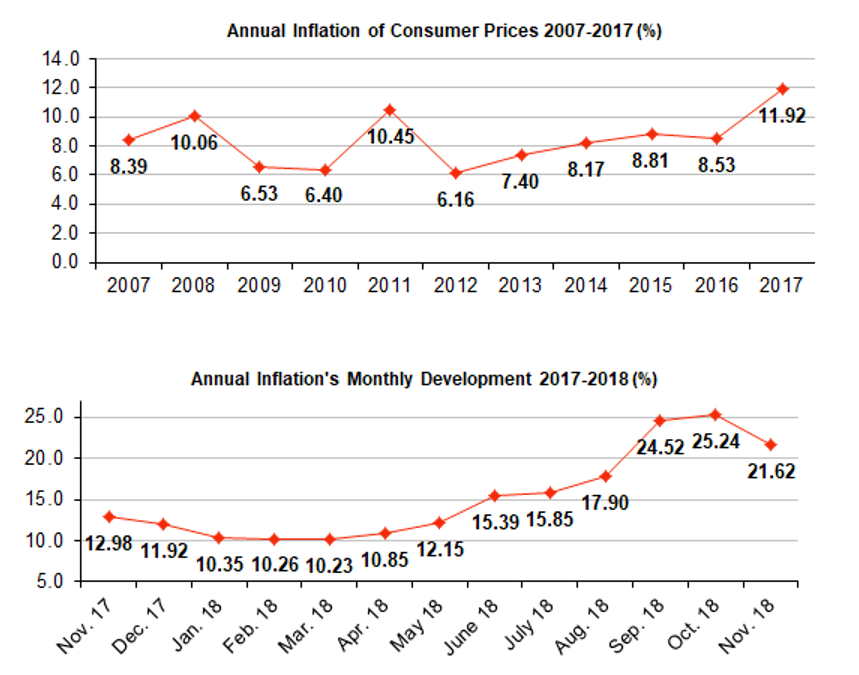