Axalta opens second factory in Turkey
Philadelphia-headquartered coating manufacturer Axalta has commissioned its powder coating plant in Çerkezköy (Tekirdağ province) following acquisition of the facility in February. Klaus Gast, Axalta’s business director for powder coatings in EMEA, stressed the importance of acknowledging the significance of Turkey’s growing powder coating market, which is already one of Europe’s largest. This is already Axalta’s second investment in Turkey following its liquid coating plant in Gebze. In addition, Axalta plans to open a showroom in Beşiktaş, Istanbul, by the end of 2019, where architects will have the opportunity to compare thousands of colour samples.
Nov. 8, 2019

Hoshizaki acquires Öztiryakiler shares
Japanese Hoshizaki Corporation, one of the world’s top three companies in the industrial kitchen sector, has acquired 28.6% of shares in Öztiryakiler, a leading Turkish manufacturer in the same sector. According to Hoshizaki, Öztiryakiler has “full potential for growth and profitability as it offers highly competitive low-cost products and their production systems, leveraging their extensive sales channels across the Middle East, Europe, and Africa region”. Hoshizaki plans to increase its shares up to 51% in the next three years. There will not be any change in the management of Öztiryakiler, which has 1,300 employees and exports to 130 countries.
Nov. 9, 2019

Firmenich and MG International to establish a JV
Two cosmetics producers, Swiss Firmenich and Turkish MG International, have announced the establishment of a joint venture company to achieve a stronger supply chain, and to increase their regional power. Gilbert Ghostine, CEO of Firmenich, said that the two companies will combine their capabilities to provide solutions in the fragrance sector in Turkey, the Middle East, North Africa, Eastern Europe and Central Asia.
Nov. 13, 2019

Fakir produces world’s first air cleaning vacuum cleaner in Turkey
German electrical household appliance manufacturer Fakir Hausgeräte has launched the world’s first vacuum cleaner which cleans also the air. The Filter Pro model has been developed by Turkish engineers over three years with a EUR 2 mn investment and will be produced at Fakir’s plant in Turkey. The product is predominantly aimed at the German market, with a sales target of 100,000 units including exports.
Nov. 15, 2019

Mitsubishi and Aksa establish a partnership
Turkish Aksa, which ranks among the world’s top five generator manufacturers, has established a new company together with Japanese industry giant Mitsubishi in the Asia-Pacific region to co-produce in Turkey and China with Mitsubishi engines under the Mitsubishi-Aksa brand. The partnership is expected to create an additional business volume of USD 100 mn.
Nov. 15, 2019

Turkish and Thai companies sign memorandum agreements
At the Memorandum of Understanding Signing Ceremony held in Istanbul by Thailand’s Ministry of Foreign Affairs, 11 agreements with a total business volume in excess of USD 450 mn have been signed. Most of the business deals involve the rubber industry. Jurin Laksanawisit, Thailand’s Minister of Commerce, voiced the expectation that a free trade agreement between the two countries is signed in 2020, which would increase the bilateral trade volume to USD 2 bn from currently USD 1.4 bn.
Nov. 18, 2019

Turkish banks and financial institutions acquire JCR Avrasya
Turkish private and state owned banks, the Borsa Istanbul stock exchange, and other financial institutions have jointly acquired 85.05% share of JCR Avrasya, the partnership of Japanese rating agency JCR in Turkey. Thus, Turkey’s first domestic rating agency, which is to rate the credit of companies borrowing from the financial markets, has been formed.
Nov. 30, 2019

UniCredit divests its shares in Koç Finansal Hizmetler
In line with its strategy to simplify its portfolio and optimize the resource distribution, Italian UniCredit has transferred it shares in the partnership Koç Finansal Hizmetler, the main shareholder of Yapı Kredi bank, to Koç Group. Following the agreement, UniCredit will directly hold 31.93% shares in Yapı Kredi, Turkey’s third largest private bank.
Dec. 2, 2019

Turkey and Libya sign accord demarcating maritime boundaries
The governments of Turkey and Libya have signed an accord demarcating an 18.6 nautical mile (35 kilometre) line as the maritime boundary between the two countries. The Greek government reacted by expelling Libya’s ambassador to Athens, stating that the agreement violates international law. In a draft summit statement, the European Union leaders declared that the agreement infringes upon the sovereign rights of third states, does not comply with the (UN) Law of the Sea, and is therefore invalid.
Nov. 28 – Dec. 12, 2019

Inflation accelerates
In November 2019, consumer prices in Turkey increased by 0.38% in comparison to the previous month. The CPI went up by 10.56% over the same month of the previous year (YOY). The highest monthly increase was registered in clothing & footwear (2.69%), ahead of furnishing & household equipment (0.59%). The only monthly decreases took place in miscellaneous goods & services (-0.44%), and hotels, cafés & restaurants (-0.15%). The biggest annual increase by far was in alcoholic beverages & tobacco (43.35%). The domestic producer price index (D-PPI) decreased by 0.08% monthly, and increased by 4.26% YOY.
Dec. 3, 2019

Turkish Central Bank reduces interest rate further
The Central Bank of the Republic of Turkey has reduced its policy rate (one-week repo auction rate) from 14.00% to 12.00%. According to the bank, the recovery in the economic activity continues while on the other hand, the investment demand has remained weak, and a weakening global economic outlook tempers external demand. The bank expects both the disinflation trend and the improvement in financial conditions to persist.
Dec. 12, 2019 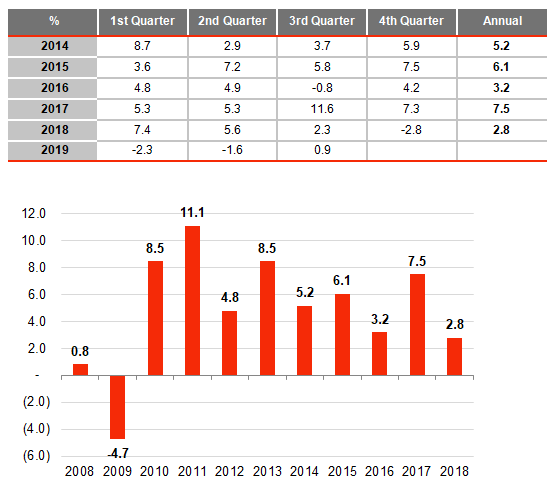 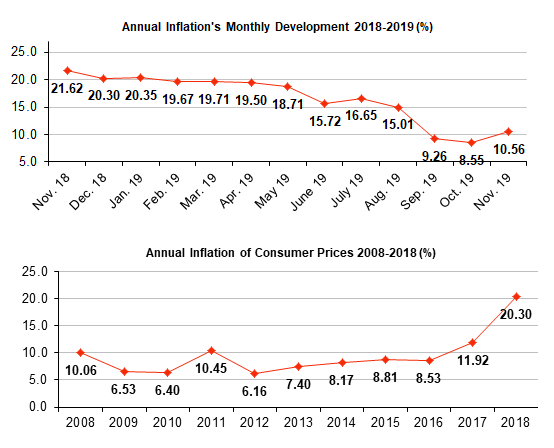