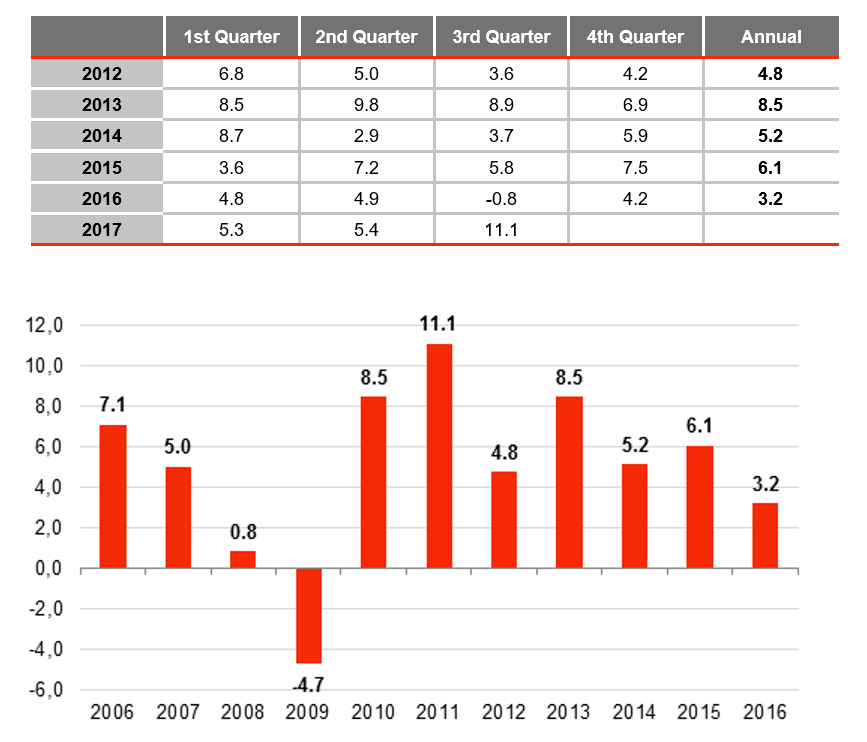 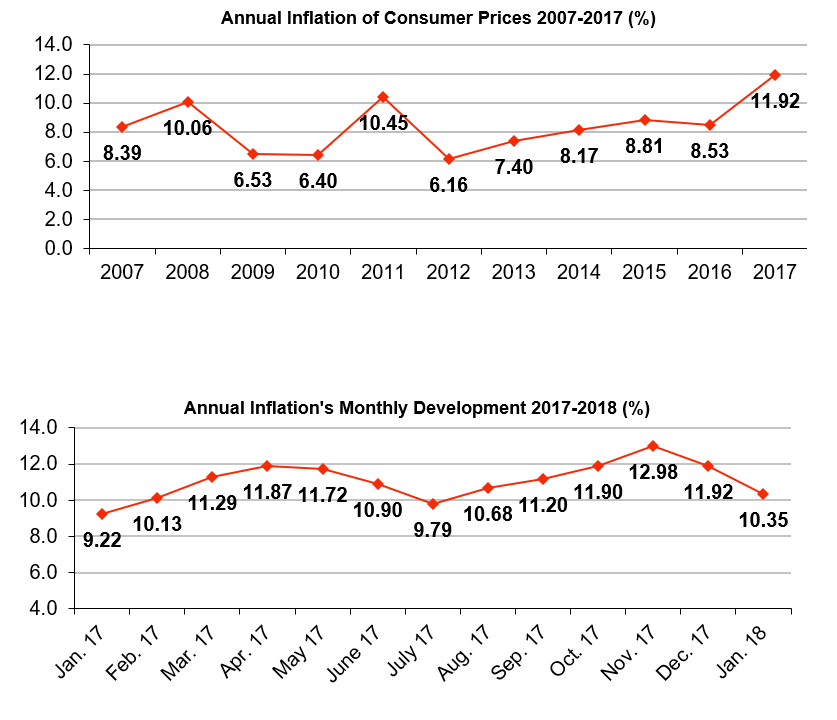 Inflation continues to decelerate
In January 2018, consumer prices in Turkey increased by 1.02% in comparison to the previous month, and by 10.35% over the same month of the previous year (YOY). The highest monthly increase was registered in miscellaneous goods and services (2.96%), followed by furnishing and household equipment (2.44%). The highest monthly decrease took place in clothing and footwear (-6.02%). The highest annual increase was in transportation (16.02%). The domestic producer price index (D-PPI) increased by 12.14% YOY, and 0.99% monthly.
Feb. 5, 2018

Central Bank keeps policy rate stable
The Central Bank of the Republic of Turkey has left the overnight lending rate at 9.25%, the one-week repo rate (policy rate) at 8.0%, and the late liquidity window lending rate at 12.75%. The bank reported that the economic activity maintains its strength, domestic demand keeps improving, and external demand contributes positively to exports. The high inflation and inflation expectations create a risk on pricing behaviour; hence, the bank has decided to maintain the tight monetary policy.
Jan. 18, 2018

Turkey launches operation in Syria
Turkey has launched a military action dubbed “Operation Olive Branch” to clear the Afrin border region in northwest Syria of the predominantly Kurdish YPG militia, which Ankara considers to be the Syrian branch of the PKK and a threat to its national security. Turkish President Recep Tayyip Erdoğan stated that after Afrin, the operation will be extended to the Manbij region further eastward. Turkey’s Prime Minister Binali Yıldırım has assured that the aim of the operation is to clean the region from terrorists and that Turkey has no intention of an invasion. Heather Nauert, spokeswoman for the United States Department of State, stated that Turkey’s concerns about PKK are legitimate, but Turkey should focus on fighting against ISIS instead of other groups. Turkey has demanded that the USA stops its training and armament support to YPG, publicly threatening force even against U.S. troops.
Jan. 20 – 31, 2018

Former Halkbank manager found guilty by U.S. court
In his trial in the U.S., Hakan Atilla, former Deputy General Manager of Turkish state-owned bank Halkbank, has been found guilty of five counts, including breaching international and U.S. sanctions against Iran, and committing bank fraud. According to Bekir Bozdağ, the Turkish government’s spokesman, the ruling is contrary to international law, and evidence of the collaboration between the U.S. justice system and the so-called Fethullah Terror Organisation (FETÖ).
Jan. 4 – 5, 2018

State of emergency extended for the sixth time
The majority of the Turkish parliament has granted the government’s request to extend the state of emergency for another three months as from January 19, 2018. Accordingly, the total duration of this ostensibly temporary measure, which had been introduced as from July 21, 2016 following the coup attempt, which grants the government extraordinary powers not only in the fight against terrorism, will reach 21 months.
Jan. 18, 2018

Netherlands withdraws ambassador to Ankara
The Dutch government has now officially withdrawn its ambassador to Ankara after the diplomat was barred from the country following the incidents that happened last year. It has been also stated that the Netherlands will not issue permission for the appointment of a new Turkish ambassador. In March 2017, permission for a rally to be held in Rotterdam by a Turkish Minister had been denied, and Dutch police blocking off the Turkish consulate clashed violently with protesters of Turkish origin. Following the incidents, Turkey sent two diplomatic notes to the Netherlands, requesting an official apology. The diplomatic ties between two countries shall remain intact at the level of chargé d’affaires.
Feb. 5, 2018

Deloitte has reported that the volume of M&As in Turkey has reached USD 10.3 bn in 2017, growing by 41%. There have been 298 mergers and acquisitions, and the transaction volume of foreign investors was 45% higher compared to 2016, reaching USD 5.5 bn. Europeans have been the main actors among foreign investors, and the leading transactions have been Vitol–OMV Petrol Ofisi, BBVA–Garanti Bank, and IFM Investors–Mersin Port. Jan. 9, 2018

Ahmet Arslan, Turkish Minister of Transport, Maritime Affairs and Communications, has announced the route of Canal Istanbul, which is designed as an alternative to Bosporus to connect the Black Sea and the Sea of Marmara on the European side of Istanbul. The 45 km long canal is planned to go through the route of Küçükçekmece-Sazlıdere-Durusu. The minister stated that the canal will decrease the ship traffic in Bosporus and create the possibility of urban transformation in the region. Nevertheless, the project faces strong criticism because of the potential environmental risks. Jan. 16, 2018

The European Bank for Reconstruction and Development (EBRD) is expecting to make a EUR 1.5 bn investment in Turkey in 2018. Suma Chakrabarti, President of EBRD, has stated that Turkey is the bank’s top investment destination, having invested EUR 5.4 bn in the last three years. The bank has supported not only large-scale companies, but also almost 80,000 SMEs in Turkey. Jan. 18, 2018

Qatar-based Al Sraiya Holding Group and its subcontractor in Bahrain, Venture Capital Bank, have acquired 42.7% of the Turkish patisserie and ice-cream franchise MADO for USD 150 mn. The deal includes the expansion of MADO in the GCC region. Abdullatif Janahi, CEO of VCBank, stated that this has been VCBank’s third major investment in Turkey, which is one of the fastest growing markets in Europe and provides a strategic position for global growth. MADO is Turkey’s largest patisserie and ice-cream franchise with more than 310 stores across Turkey and 48 locations worldwide. Jan. 26, 2018