Erdoğan inaugurates PepsiCo’s plant in Manisa
Turkish President Recep Tayyip Erdoğan has attended the commissioning ceremony of PepsiCo’s new plant in the city of Manisa. This sixth plant of U.S. corporation PepsiCo in Turkey, which is planned to employ 300 people, has been built on a total area of 100,000 sqm with a USD 105 mn investment. 250 million packs of Lay’s, Doritos and Ruffles brand snack products shall be manufactured each year in the facility. According to Levent Yüksel, General Manager of PepsiCo Turkey, the plant has been designed in line with lean production principles, and its infrastructure has been integrated with Industry 4.0.
Jan. 7, 2019

Turkish automotive industry contracts in 2018
Since the increase in exchange rates and interest rates has reduced domestic demand, Turkish automotive production contracted by 9% and the domestic market by 35% in 2018. For passenger cars, the contraction rates were 10% in production and 33% in the domestic market, for commercial vehicles 5% and 41%, respectively. The highest decrease in automotive production was in the tractor segment with 69%. Automotive exports dropped by 1%, and imports by 36%.
Jan. 14, 2019

M&As by foreigners increase 38% in 2018
Deloitte has reported that the volume of M&As in Turkey has reached USD 12.0 bn in 2018, growing by 17%. There were 256 mergers and acquisitions, and the transaction volume of foreign investors was 38% higher compared to 2017, reaching USD 7.6 bn. In terms of the number of deals, Europeans were the main actors among foreign investors with a 49% share, whereas in terms of the deal volume, the Gulf countries led with 45%. Major transactions by foreigners in 2018 were Emirates NBD Bank PJSC (U.A.E.) – Denizbank, DFDS A/S (Denmark) – U.N. Ro-Ro, and Taiwan Cement Corporation (Taiwan) – OYAK Çimento.
Jan. 15, 2019

Foreigners purchase 78% more homes in 2018
Foreign citizens purchased 39,663 residences in Turkey in 2018, 78% more than in the preceding year. Besides the ongoing depreciation of the Turkish lira, another main reason of the increase was a regulatory change that grants citizenship rights to those purchasing homes in excess of USD 250,000. The buyers were mostly from Iraq, Iran, S. Arabia, Russia, and Kuwait.
Jan. 17, 2019

Atatürk Airport closing to commercial flights as from March 3
From March 3 onwards, Istanbul’s Atatürk Airport will be closed to both domestic and international commercial flights. According to the announced schedule, relocation from Atatürk Airport to the new Istanbul Airport will start on March 1 at 03:00 hours and end on March 3 00:00 hours. In future, the old airport will be used only for cargo transport, maintenance and repair, general aviation purposes, air taxis, business flights, and government aircraft.
Jan. 21, 2019

EBRD plans to invest another EUR 1 bn in Turkey in 2019
The European Bank for Reconstruction and Development (EBRD) is expecting to make total investments of EUR 1 bn in Turkey in 2019. Arvid Tuerkner, Managing Director for Turkey at EBRD, stated that the bank invested EUR 1 bn for 34 projects in Turkey in 2018, and that he expects the volume to be at a similar level this year. He added that despite the turbulence, Turkey’s strong fundamentals still stand, and the bank retains its strong attachment to the Turkish economy.
Jan. 22, 2019

New Renault Clio to be manufactured in Bursa
Antoine Aoun, General Manager of Turkish-French joint venture Oyak Renault, has announced that the new Clio model will be produced in the company’s Bursa plant. He added that 80% of the plant’s production are currently being exported to almost 70 countries. The new Clio will be first exhibited at the Geneva International Motor Show in March.
Jan. 23, 2018

Frachtbox Istanbul office becomes active
Swiss Frachtbox, the online platform where customers and logistics companies can meet, has established its first office abroad in Istanbul. Tülin Doğan, Country Manager of Frachtbox, declared that the growth of the company will accelerate following the foundation of Istanbul office, as Turkey is a bridge between Asia and Europe, and they are planning to establish offices also in Izmir and Mersin in 2019. According to Ms Doğan, the Istanbul office shall also manage the neighbouring countries, as well as France and Italy.
Jan. 24, 2018

Toyota Turkey starts mass production of hybrid Corolla
Following a EUR 230 mn investment, the Japanese automotive giant has started mass production of the new Corolla Sedan which has a 1.8 litre hybrid version with 122 hp, and a 1.6 litre gasoline-powered version with 132 hp. Dr. Johan van Zyl, CEO of Toyota Motor Europe, stated that the new sedan will significantly contribute to reaching their 50% hybrid sales target by 2020. Toshihiko Kudo, President and CEO of Toyota Turkey, added that the investment reflects Toyota’s confidence in the Turkish economy, and informed that the Adapazarı plant has the highest production volume among Toyota’s plants in Europe. Toyota Turkey has an annual production capacity of 280,000 passenger cars, exporting 90% of its production to 150 countries.
Jan. 29, 2019

SOCAR acquires EWE Turkey
The State Oil Company of Azerbaijan Republic (SOCAR) has acquired EWE Turkey Holding and its subsidiaries Bursagaz, Kayserigaz, Enervis, EWE Enerji, and Millenicom. EWE Turkey has been managing the operations of the German energy company EWE AG in Turkey since 2007, and was the fourth largest natural gas supplier in the market. Following this acquisition, SOCAR’s activities in Turkey have widened to include natural gas distribution. SOCAR’s President, Rövnag Abdullayev, said that they will continue to evaluate further opportunities in the Turkish market in the forthcoming period.
Jan. 31, 2019

Putin and Erdoğan meet in Moscow
The presidents of Russia and Turkey, Vladimir Putin and Recep Tayyip Erdoğan, have met in Moscow. The two leaders discussed the security zone to be established in Syria, the Idlib issue, and political efforts to end the civil war. Erdoğan emphasized that the U.S.’ withdrawal from Syria must not leave a void that could be abused by terrorist groups. Putin underlined that they are encouraging the Syrian government to have a dialogue with the Kurdish groups. Two weeks after the meeting between the leaders, Russia abolished the visa requirement for Turkish nationals visiting Russia for short business trips, lorry drivers, service passport holders, and officers working in diplomatic missions. Russia had introduced the visa requirement after a Russian warplane was shot down by the Turkish armed forces at the Syrian border in November 2015.
Dec. 20, 2018 – Feb. 7, 2019

Turkey-Russia-Iran summit held in Sochi
Turkish President Recep Tayyip Erdoğan, Russian President Vladimir Putin, and Iranian President Hassan Rouhani have met in Sochi to discuss the situation in Syria. Erdoğan demanded that the Kurdish YPG militia has to be cleansed from the region. Rouhani claimed that the U.S. is protecting and using the terrorist groups in Syria and Iraq for its own aims. Maria Zakharova, Russian Foreign Ministry spokeswoman, told reporters that Turkey should work to obtain the consent of the Syrian regime to create a safe zone on Syrian territory.
Feb. 15, 2019 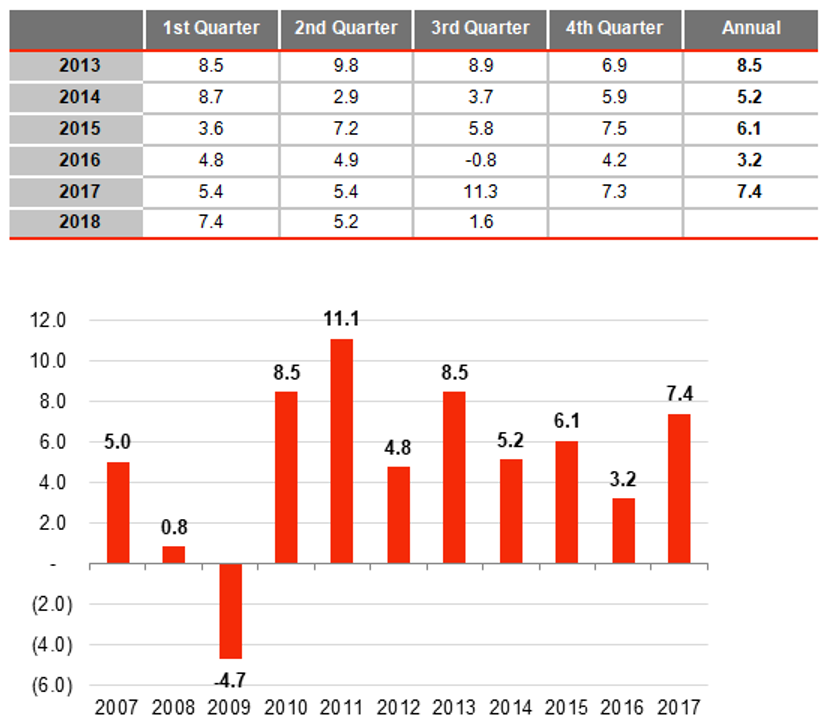 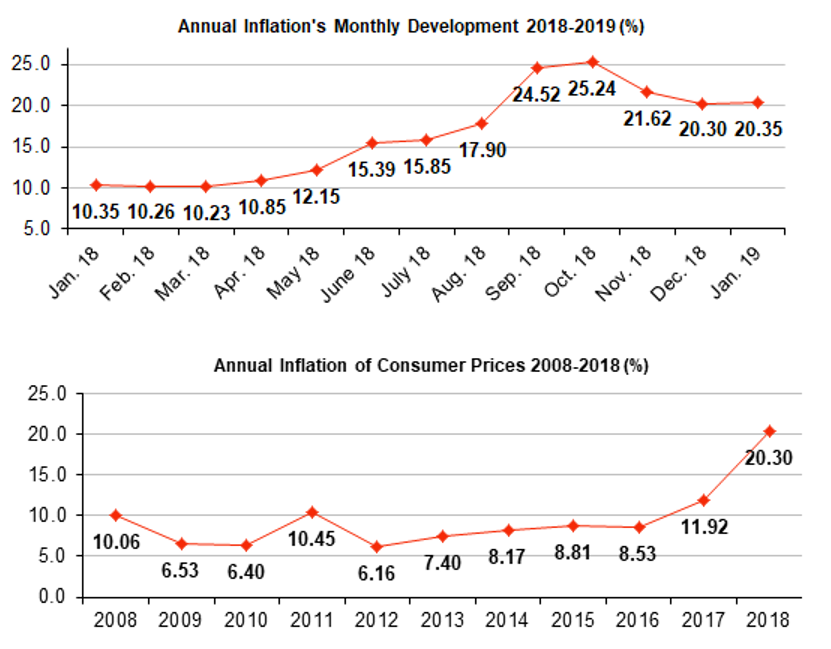