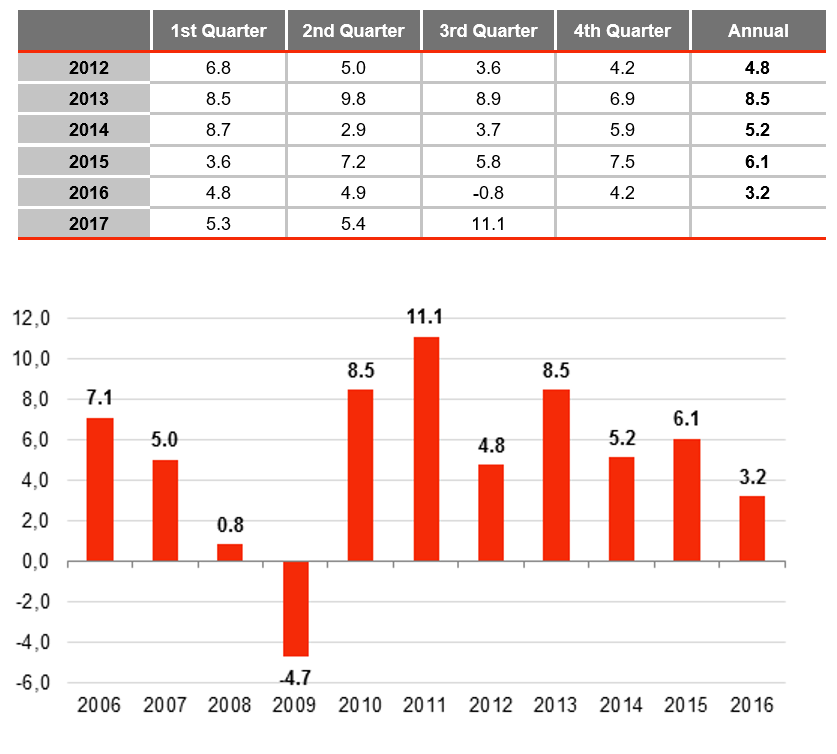 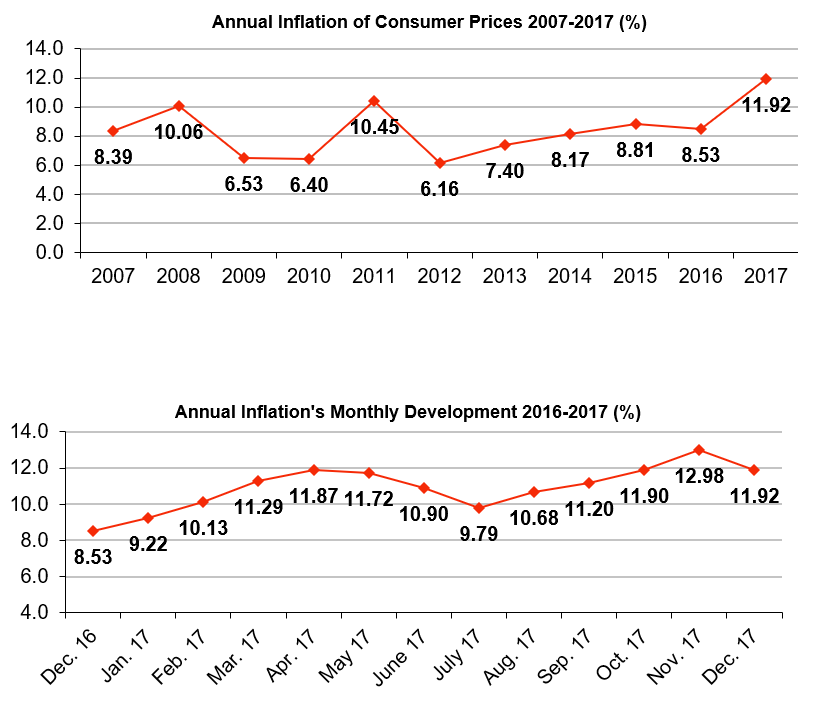 Highest year-end inflation since 2004
In December 2017, consumer prices in Turkey increased by 0.69% in comparison to the previous month, and by 11.92% over the same month of the previous year (YOY). Accordingly, the increase in CPI-YOY stopped its upward trend of the previous four months. Nevertheless, this was the highest year-end inflation since 2004. The highest monthly increase was registered in transportation (1.69%), followed by food and non-alcoholic beverages (1.52%). Monthly decreases took place in clothing and footwear (-2.39%), communications (-0.17%), and alcoholic beverages and tobacco (-0.01%). The highest annual increase was again in transportation (18.24%). The domestic producer price index (D-PPI) also decelerated and increased by 15.47% YOY, and 1.37% monthly.
Jan. 3, 2018

USA and Turkey mutually resume visa services
Following the assurance given by the government of Turkey not to detain or arrest any U.S. embassy and consulate staff over allegations of wrongdoing during the performance of their official duties, the U.S. Embassy in Ankara has announced that their visa restrictions against Turkish citizens have been lifted. Visa services had been suspended mutually in October 2017, following the arrest of a local US consulate employee in Istanbul based on his alleged links to the so-called Fethullah Terror Organisation (FETÖ). In response to Washington’s move, the Turkish Embassy in the U.S. capital lifted its visa restrictions against American citizens. Following the resolution of the visa crisis, the Turkish lira appreciated against the US dollar.
Dec. 29, 2017

Turkish specialized shipbuilder Sanmar is to build the world’s first hydraulic hybrid tugboat in collaboration with American Caterpillar. The tug will be designed by Canada-based company Robert Allan Ltd. and provide service in Turkish ports with low emissions and high fuel efficiency. Sanmar, one of the world’s top ten tugboat manufacturers, has already launched the world’s first LNG-powered tug and first remote-controlled ship in the past years. The company plans to build 24 tugboats in 2018. Dec. 7, 2017

German logistics giant DHL Supply Chain has received a certificate for two R&D centres in Turkey. Orkun Saruhanoğlu, General Manager of DHL Supply Chain Turkey, stated that the size of the Turkish logistics market is USD 100 bn as of 2017. To further boost this market, more investments in research and development are needed, he said. 30 engineers have been hired to work at DHL’s R&D centres. Dec. 20, 2017

Faruk Özlü, Turkish Minister of Science, Industry and Technology, has announced the allocation of USD 5 bn in funding for private sector R&D expenditures from the 2018 budget. The minister added that the aim is to rapidly increase the number of private R&D and design centres in Turkey to one thousand, up from the current level of 900. Currently 44,303 people are employed in centres of this kind. Dec. 21, 2017

Friedrich Joussen, executive chairman of the German travel giant TUI Group, has reported a 70% increase in Turkey sales for the 2018 season. He claimed that Turkey will be their most important destination in 2018, saying that one of the reasons of the increase in demand for holidays in Turkey lies in the hike in Spanish hotel rates. The website www.hotelbeds.com confirmed the increase and stated that the interest of British holidaymakers has significantly contributed to this. Dec. 21, 2017

Siemens has commissioned its low-voltage switchgear plant in Gebze, Turkey. The integrated plant with a total area of 150,000 sqm brings the company’s total investment volume in the Gebze Organized Industrial Zone to EUR 65 mn. The product groups to be manufactured in the new facility are contactors and accessories, overcurrent relays, automatic fuses, automatic switchgear accessories and components. According to Klaus Helmrich, member of the board of Siemens AG, the advanced technology provided by the plant will play a pioneering role in the digital development of Turkey with innovative solutions. Dec. 22, 2017

Texas-based chemicals giant Vinmar has acquired a 90% stake in Turkish chemicals distributor Veser. The product portfolio of Veser A.Ş. includes pharmaceuticals, cosmetics, lubricants, and detergents. Veser has 130 employees, and the 2017 turnover target of the company was TRY 200 mn. Dec. 26, 2017

UAE-based KMK Investment has signed an agreement with the Turkish IMA Group for a USD 5 bn fund to be used in projects in various sectors in Turkey. IMA Group manages a EUR 780 mn fund in diverse business fields worldwide. Dec. 27, 2017

Labour law disputes in Turkey are to be resolved by mandatory mediation as from Jan. 1, 2018. When the related article of the Labour Courts Law has come into force as from the new year, employers and employees have to go to mediators first to resolve their disputes. Filing a suit will only be possible if no agreement has been reached via mediation. Dismissed employees are required to submit their applications within one month. Mediators are obliged to finalize all applications within three weeks. The new system aims at decreasing the workload of the Turkish judiciary and reducing the time needed to resolve disputes. Dec. 28, 2017