Brisa commissions smart plant
Brisa, the partnership of Japanese tyre giant Bridgestone and Turkish conglomerate Sabancı, has built its second production facility in the city of Aksaray with an investment of USD 300 mn. The plant, which has been designed as the first “smart factory” of the Turkish tyre industry, will produce 4.2 million tyres per year with 700 employees when it reaches full capacity. Brisa’s first factory in Kocaeli already has an annual production capacity of 11 million tyres. Makoto Hashimoto, Vice President of Bridgestone Corporation, emphasized the technological superiority of the plant and its role as important manufacturing base for Bridgestone. The technological features of the new plant include a transfer system to handle the tyres automatically, and a digital twin of the plant where all production processes can be followed remotely, as well as the possibility to connect two plants through “augmented reality” which makes it possible to develop solutions for problems in one plant from another plant.
Dec. 3, 2018

Ericsson commissions global research lab in Istanbul
In cooperation with the Scientific and Technological Research Council of Turkey (TÜBİTAK), Swedish ICT giant Ericsson has commissioned a research laboratory in Istanbul, its 11th research centre in the world. The laboratory will provide Turkish researchers with the opportunity to publish new international patents and research. In the words of Rafiah Ibrahim, Head of Market Area Middle East & Africa, “This inauguration comes as an endorsement of Turkey’s innovation, entrepreneurial spirit and the great talents of this country.” She added that the centre is aimed to become a platform in the digital transformation of Turkey while serving as a hub for exports to 33 countries. 5G and the Internet of Things will be among the focus areas of the centre.
Dec. 5, 2018

Erdoğan announces name of first Turkish general-purpose helicopter
At the Turkish Defence Industry Summit held in Ankara, Turkish President Recep Tayyip Erdoğan announced that the first Turkish general-purpose helicopter, to be used for both civil and military purposes, shall be named “Gökbey”, meaning “Lord of the Skies”. Turkish defence companies Turkish Aerospace Industries (TAI) and ASELSAN assumed the leading roles in the production. The T-625 helicopter with a 12-passenger capacity had its first test flight in September 2018, and serial production is scheduled to begin in 2021.
Dec. 12, 2018

BP and SOCAR sign HoA to evaluate petrochemicals investment
British Petroleum and Azerbaijani SOCAR have signed a heads of agreement (HoA) to evaluate the possibility of building and operating a petrochemicals complex in Turkey through a joint venture. The facility is designed to manufacture 1.25 million tonnes of purified terephthalic acid (PTA), 840,000 tonnes of paraxylene (PX), and 340,000 tonnes of benzene per year. The final investment decision will be made in 2019, and if decided, the facility will become operable in 2023. Mick Stump, President of BP Turkey, said that Turkey is a bridge between West and East, as well as between producers and consumers, and its fast-growing economy is paving the way for attractive investments.
Dec. 21, 2018

Turkish CEO put in charge of Sompo Japan’s global retail operations
Recai Dalaş, CEO of Sompo Japan’s subsidiary in Turkey, has been appointed as CEO of Retail and chairman of the Retail Executive Committee of Sompo International to oversee the global retail operations of Sompo Group outside of Japan as from Jan. 1, 2019. He will continue to lead the Turkish subsidiary. The Japanese insurance giant entered the Turkish market in 2010 by acquiring Fiba Sigorta.
Dec. 21, 2018

Iran and Turkey to cooperate in order to increase trade volume
Iranian President Hassan Rouhani has met with Turkish President Recep Tayyip Erdoğan in Ankara. Erdoğan stated that Turkey disapproves of the U.S. sanctions against Iran, and is working to enhance the conditions of doing business with Iran. Rouhani thanked Turkey for its attitude on the U.S. sanctions, adding that they have decided to continue the cooperation between Turkey, Iran and Russia regarding the Syria issue. Both countries agreed to cooperate in order to increase the volume of trade between the two countries to USD 30 bn, up from USD 11 bn in 2017.
Dec. 21, 2018

Inflation decelerates
In December 2018, consumer prices in Turkey continued their downward trend, dropping 0.40% in comparison to the previous month. The CPI went up by 20.30% over the same month of the previous year (YOY). The highest monthly increase was registered in food and non-alcoholic beverages (1.08%), ahead of miscellaneous goods and services (0.78%), and health (0.62%). The highest decreases took place in clothing and footwear (-4.08%), transportation (-2.56%), and recreation and culture (-0.25%). The highest annual increase was in furnishing and household equipment (31.36%). The domestic producer price index (D-PPI) decreased by 2.22% monthly, and increased by 33.64% YOY.
Jan. 3, 2019

Turkish Central Bank keeps interest rate constant
The Central Bank of the Republic of Turkey has kept its policy rate (one week repo auction rate) constant at 24.00%. According to the bank, the rebalancing trend in the economy has become more noticeable and the external demand maintains its strength, but the slowdown in the economic activity continues, partly due to tight financial conditions. The statement also said that even though the developments in import prices and domestic demand conditions have led to some improvement in the inflation outlook, risks on price stability continue to prevail. Hence, the bank has decided to maintain its tight monetary policy.
Jan. 16, 2019 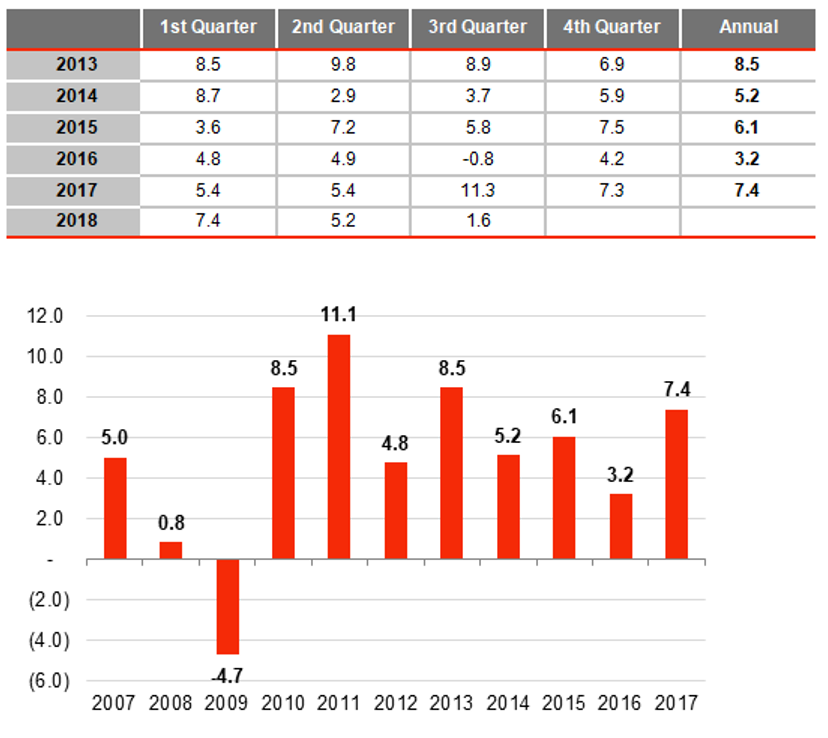 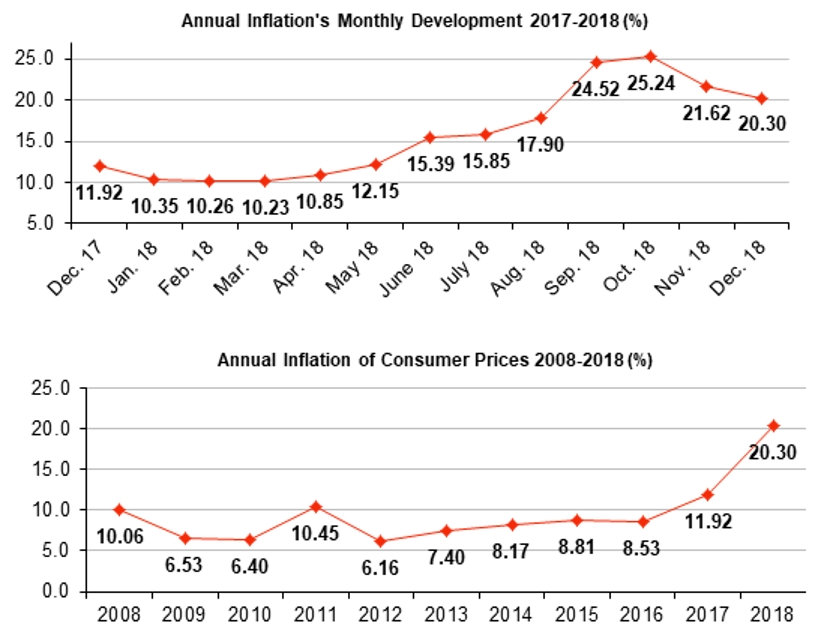