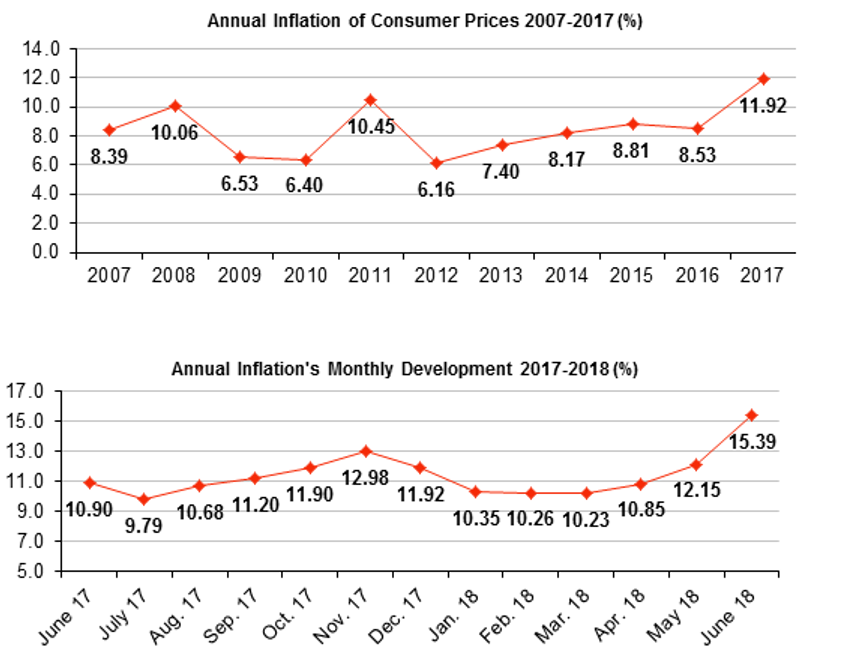 Inflation continues to accelerate
In June 2018, consumer prices in Turkey increased by 2.61% in comparison to the previous month, and by 15.39% over the same month of the previous year (YOY). Accordingly, the increase in the 2003-based CPI reached its highest level ever. The highest monthly increase was registered in food and non-alcoholic beverages (5.98%), followed by communication (4.76%). The only monthly decrease took place in clothing and footwear (-1.15%). The highest annual increase was in transportation (24.26%). The domestic producer price index (D-PPI) increased by 23.71% YOY, the highest rate since July 2003, and 3.03% monthly.
July 3, 2018

Presidential system era begins in Turkey
Recep Tayyip Erdoğan, Turkey’s head of state and leader of ruling Justice and Development Party (AKP), has become the first president in the new system where the president is also the head of government with extended powers. Erdoğan had won the presidential elections held on June 24 with 52.59% of the votes, while his closest rival, Muharrem Ince of the Republican People’s Party (CHP), managed to receive 30.64%. Following the swearing-in ceremony, Erdoğan announced his new cabinet, in which the
number of ministers has been cut to 16, two of which are women. Erdoğan’s son-in-law Berat Albayrak, formerly Minister of Energy and Natural Resources, was appointed Treasury and Finance Minister, taking a leading role in the economic policy. Mevlüt Çavuşoğlu kept his position as Minister of Foreign Affairs, whereas four-star general Hulusi Akar, Chief of the General Staff, is the new Minister of National Defence, which makes him the first active military officer in the history of Turkey to serve in a civilian government.
July 10, 2018

TANAP (The Trans-Anatolian Natural Gas Pipeline), which is to transport Azerbaijani natural gas to Europe via Turkey, has been inaugurated with an official ceremony at the compressor station close to the city of Eskişehir, with the presidents of Turkey, Azerbaijan, Ukraine, Serbia and the Turkish Republic of Northern Cyprus in attendance. The total project cost of the 1,850 km line has been put at USD 8 bn. Out of the pipeline’s annual capacity of 16 billion cubic meter, 6 billion cubic meters shall be supplied to Turkey, and 10 billion cubic meters to Europe.
June 13, 2018

The Mount Ovit Tunnel between the provinces of Rize and Erzurum, currently the world’s 6th longest highway tunnel at 14.346 m long, has been commissioned in an official ceremony with the participation of Turkish President Erdoğan. The tunnel, construction of which had begun in May of 2012, is intended to facilitate road transport between the Black Sea and Eastern Anatolia regions of Turkey. It replaces the Mount Ovit pass at 2,640 m above sea level which is frequently impassable between November and May due to snowfall and risk of avalanches.
June 14, 2018

Pietro Fiorentini S.p.A., one of Italy’s oldest energy equipment manufacturers, has acquired Turkish company Gemsat A.Ş. Being located in the city of Bursa, Gemsat manufactures natural gas equipment both for the domestic and the export market. Pietro Fiorentini has already been represented in the Turkish market with its own office for 27 years.
June 20, 2018

Global logistics companies have increased their activities in Turkey through new investments. By virtue of Turkey’s advantageous location between Europe and Asia, the increasing shift of manufacturing activities towards Eastern Europe, and China’s Belt and Road Initiative –aka the “New Silk Road”, multiple logistics companies have chosen Turkey as a hub in recent months. British TGP has established its Istanbul office in March, and P&O Ferrymasters SRL, headquartered in Romania, in June. Besides that, Hong Kong-based Kerry Logistics has launched a new combined rail & road transportation line between China and Turkey, with an investment of 50 trucks. Furthermore, German logistics giant DHL is contemplating the possibility of establishing seven new logistics centres in the eastern provinces of Anatolia within one year given the increasing economic activity in Eastern Anatolia.
June 21-27, 2018

Number of Chinese companies in Turkey has reached 1,000. The presence of Chinese companies in the Turkish market has particularly increased following the entry of the two leading Chinese banks, Bank of China and ICBC. The logistics industry, where Turkey is an important link in the Belt and Road Initiative, is one of the main sectors in which Chinese companies are interested. Tourism, shopping mall and port investments also attract their attention.
June 29, 2018