Japanese corporations continue to acquire Turkish companies
A major Turkish plastics manufacturer, Emaş, has been acquired by London-based Sumika Polymer Compounds, which is actually owned by a consortium of 3 large Japanese corporations led by Sumitomo. Bursa-headquartered Emaş, founded as Akçe Plastik in 1978, employs 150 people in 3 production facilities. Its products cater to a wide variety of industries, in particular the automotive and white goods sectors.
June 10, 2019

Another huge biotechnology investment in Turkey
Iranian CinnaGen, the biggest biopharma company of the MENA region, is investing USD 100 mn in the new production facility and R&D centre of its Turkish subsidiary located in Çerkezköy. The factory will produce remedies for rare diseases, among them Turkey’s first orphan drugs, aiming to export USD 150 mn worth of its products in the first year, and to replace billions of dollars in imports. According to CinnaGen’s country director, Ferhat Farşi, Turkey’s growth in this strategically important sector is the fastest among the emerging economies, at 14% annually.
June 11, 2019

European Union gives record grant for Turkish railway project
The contract has been signed for construction of the final 155-kilometre Çerkezköy-Kapıkule section of the continuous, high-standard railway line to connect London with Turkey as part of the New Silk Road stretching as far as Beijing. The Turkish government has invested TRY 600 bn into the country’s railway system over the past 16 years, and for this part of the project, a EUR 275 mn grant from the European Union has been received. According to Ambassador Christian Berger, Head of the EU Delegation to Turkey, this is the largest single grant ever allotted to any project outside the EU.
June 12, 2019

Turkish-made combat aircraft to be showcased in Paris
At the Paris Air Show, Turkey’s national aerospace manufacturer TUSAŞ shall present a one-on-one model of its National Combat Aircraft, which was developed for the needs of the Turkish Armed Forces. The jet, advertised as “Europe’s best combat aircraft”, is to have its maiden flight in 2025. Another TUSAŞ product, the TK129 helicopter, shall perform demo flights throughout the show. This attack helicopter has been designed for tough conditions such as hot weather and high altitude.
June 18, 2019

TANAP project ready to go Europe
As of July 1, 2019, the Trans-Anatolian Natural Gas Pipeline (TANAP), running from the Georgian border all the way to the Greek border, has been completed. This 1,850 km long pipeline is the centrepiece of the Southern Gas Corridor, a supply route from the Caspian Sea to Europe. TANAP, which is already carrying Azerbaijani gas to Turkey, is now waiting to be connected to the Trans-Adriatic Pipeline (TAP) once it is ready. The project cost was under USD 7 bn, 40% less than the initial cost estimate.
July 2, 2019

Iraq bans import of more food products from Turkey
Counter to efforts by the Turkish government to boost its exports to Iraq, the import of more food products from Turkey has been prohibited. Following eggs, soft drinks, and ice cream, this now also applies to table salt, noodles, and pasta. The reasons for this step are seen as tensions in the mutual relations, the Iraqi central government’s policy emphasis on home production, and improved trade relations with Iran. While the ban has been enacted for only one year, it is feared to inflict permanent damage, forcing factories to shut down, and pushing up regional unemployment.
July 2, 2019

EU sanctions Turkey for Cyprus offshore gas exploration, Turkey rebuts
At their meeting in Brussels, the foreign ministers of the European Union announced the suspension of high-level talks and around USD 164 mn in financial aid, as well as other possible sanctions in response to Turkey’s persistence in the matter of gas exploration off the shore of Cyprus. The Republic of Cyprus regards the area as their national waters whereas Turkey contends the jurisdiction of the Turkish Republic of Northern Cyprus on whose behalf it claims to act. The Foreign Ministry issued a strongly-worded rebuttal, touching on the unsolved problems in partitioned Cyprus.
July 15 – 16, 2019

Inflation decelerates
In June 2019, consumer prices in Turkey increased by 0.03% in comparison to the previous month. The CPI went up by 15.72% over the same month of the previous year (YOY). The highest monthly increase was registered in hotels, cafes and restaurants (2.65%), ahead of miscellaneous goods and services (1.86%). The highest monthly decreases took place in food and non-alcoholic beverages (-1.65%), followed by clothing and footwear (-1.57%). The biggest annual increases were in miscellaneous goods and services (26.88%), and furnishing and household equipment (22.51%). The domestic producer price index (D-PPI) increased by 0.09% monthly, and by 25.04% YOY.
July 3, 2019

Central Bank governor replaced
President Erdoğan has dismissed the governor of the country‘s Central Bank, Murat Çetinkaya, replacing him with his former deputy, Murat Uysal. Erdoğan argued that Çetinkaya had failed to carry out instructions to lower the interest base rate, which he said would also bring down inflation. Another point of disagreement seems to have been Çetinkaya’s refusal to transfer the Central Bank’s contingency reserve to the Treasury. Critics objected to the President’s decision, saying that it compromises the requisite independence of the Central Bank.
July 8, 2019

Fitch has revised Turkey’s ratings downwards
The rating agency Fitch has cut Turkey’s Long-Term Foreign Currency Issuer Default Rating to non-investment grade BB- due to the firing of the central bank governor, the delay in the improvement of economic growth and inflation, and possible U.S. sanctions because of Turkey’s purchase of Russian missile systems. The agency kept the country’s outlook as negative.
July 12, 2019 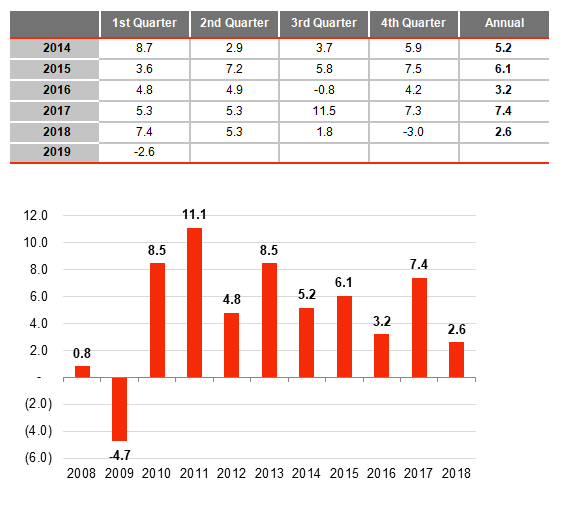