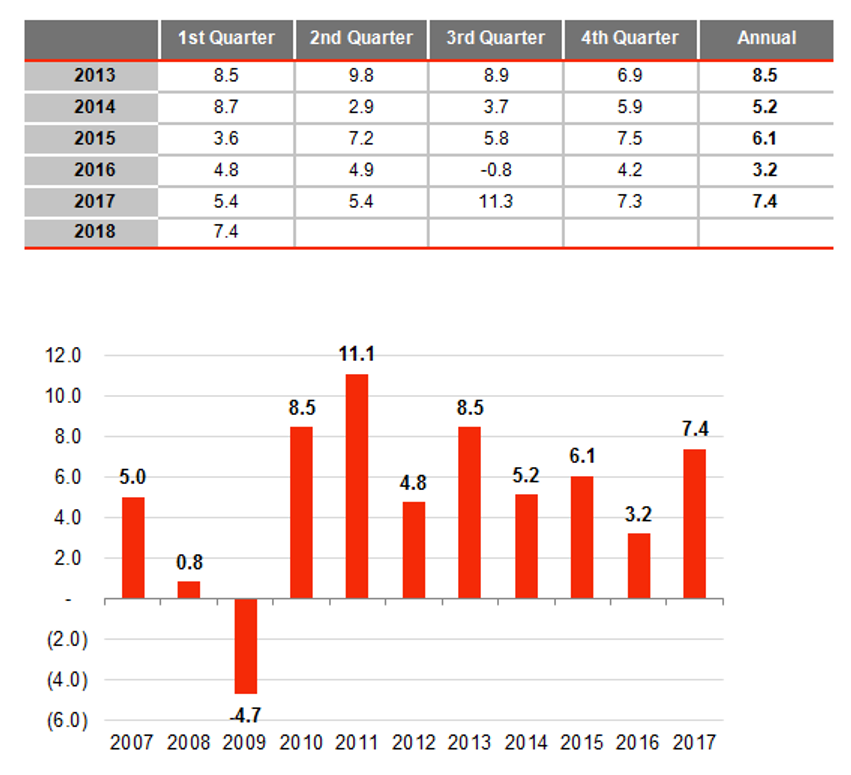 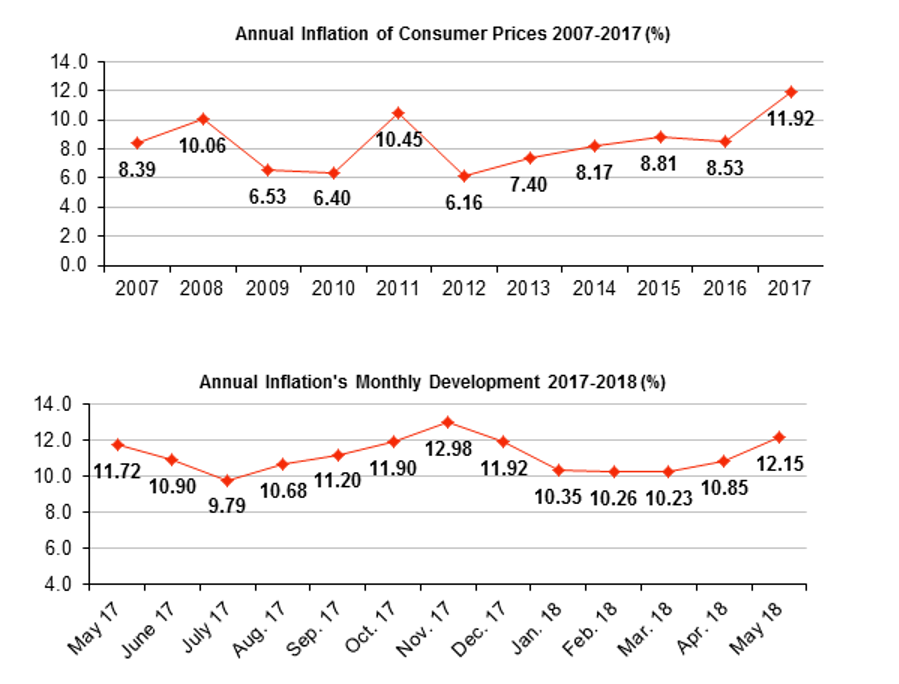 Inflation accelerates
In May 2018, consumer prices in Turkey increased by 1.62% in comparison to the previous month, and by 12.15% over the same month of the previous year (YOY). Accordingly, the increase in the CPI reached its highest level since November 2017. The highest monthly increase was registered in clothing and footwear (5.21%), followed by transportation (2.32%). No monthly decrease took place in the main product groups in May. The highest annual increase was in transportation (20.02%). The domestic producer price index (D- PPI) increased by 20.16% YOY, the highest rate since August 2003, and 3.79% monthly.
June 4, 2018

Turkish economy reports 7.4% growth in first quarter
In the first quarter of 2018, Turkey’s GDP grew in line with expectations, by 7.4% compared with the same period of the previous year. The increase in private consumption expenditures for nondurable goods and services, followed by the construction investments, were the main reasons of the high growth. The quarterly GDP at current prices reached TRY 792.7 bn, and USD 207.8 bn in dollar terms. Agriculture grew by 4.6%, industry by 8.8%, the services sector by 10.0%, and the construction industry by 6.9%.
June 11, 2018

Turkish Central Bank increases its interest rates
The Central Bank of the Republic of Turkey has increased its interest rates to try and curb the recent exchange rate fluctuations. The one-week repo rate of 16.5%, which had been designated as policy rate from June 1 onwards, has been increased to 17.75% on June 7. The late liquidity window lending rate which had been increased from 13.5% to 16.5% on May 23, has been further increased to 20.75%, and the overnight lending rate to 19.25%. The bank reported that recently released data indicate a rebalancing trend in the economic activity, and that the high inflation and inflation expectations create a risk on pricing behaviour. Hence, the bank has decided to strengthen the monetary tightening.
June 7, 2018

Turkey criticises U.S. decision to withdraw from Iran nuclear deal
Turkish President Recep Tayyip Erdoğan reacted by saying that this actually puts the USA on the losing side as it does not honour the agreement it signed. Similarly, Turkish Minister of Foreign Affairs Mevlüt Çavuşoğlu voiced the opinion that it is not right for the USA takes a decision single-handedly. Turkish Minister of Economy Nihat Zeybekçi announced that Turkey shall continue its trade with Iran in line with the United Nations rules.
May 9 – 11, 2018

Turkish Ziraat Bank and Iranian Bank Melli have agreed to establish an integrated card system for tourists travelling between the two countries. Iranians are allowed to carry maximum 1,000 Euros in cash when they travel abroad. 2.5 million Iranians visited Turkey in 2017, and the new system is expected to increase this tourism volume and the trade between the two countries. May 2, 2018

Germany based ThyssenKrupp corporation has commissioned its first plant in Turkey with a EUR 20 mn investment in Dilovası (province of Kocaeli). The escalator factory shall have an annual production capacity of 1,200 units. Apart from Turkey, the main target markets of this production facility are Eastern Europe, the Turkic Republics, and the Middle East. May 9, 2018

Nestlé has announced a TRY 100 mn investment in Turkey until 2023. Felix Allemann, CEO of Nestlé Turkey, said that Nestlé is planning to increase their investment volume, and make total investments of TRY 100 mn in the next five years. The current investment volume of the company averages TRY 5 mn per year. Nestlé has been active in Turkey for 108 years, and currently operates two production plants in Bursa, employing 3,800 people. May 15, 2018

Dubai-based Emirates NBD, the second largest bank of the GCC region, has acquired DenizBank from its Russian owners Sberbank for USD 3.2 bn. Hakan Ateş, CEO of DenizBank, announced that both name and top management of the bank shall remain unchanged. DenizBank has an asset volume of TRY 169 bn, and with 14,000 employees, the bank serves 11.8 million customers. May 23, 2018

Boeing has announced commissioning of an engineering centre in Turkey in the third quarter of 2018. The centre, located in a techno park close to Istanbul’s Sabiha Gökçen Airport, shall specialize in airplane interiors. Marc Allen, the President of Boeing International, stated that they have selected Turkey as a strategic partner by signing the “National Aviation Plan” which had been drawn up jointly with the Turkish government. Accordingly, the company has signed contracts with Turkish aviation companies TAI, TSI and Kale Group, and Turkey is planned to become a centre of excellence for all moving components of the airplane. May 28, 2018

The European Bank for Reconstruction and Development (EBRD) has acquired 25% shares in Turkish D-Marinas B.V. for EUR 70 mn. The company belongs to Doğuş Holding, one of the leading conglomerates in Turkey, and operates ten marinas in Turkey, Greece, and Croatia. D-Marinas B.V. with its total capacity of 8,000 yachts is the largest and only multinational marina chain in the Eastern Mediterranean. May 30, 2018

Transportation network company Uber has been banned in Turkey through an amendment in the Regulation of Road Transport. Accordingly, transportation companies having Uber vehicles in their car pool shall be warned, and in case they continue their activities, penalties shall be imposed, including a cancellation of their licences. Uber had been facing protests, sometimes violent, by Turkish taxi drivers recently on claims of unfair competition. May 30, 2018