Spanish hotel group Barceló plans to multiply its investment in Turkey
Spain’s second-largest hotel chain Barceló Hotel Group, which operates 251 hotels in 25 countries, recently opened its third hotel in Istanbul. In its 20 years in the Turkish market, the company has invested € 60 mn so far. Now it has decided to expand to Antalya, Cappadocia, Izmir, and Ankara, aiming to operate 20 hotels in 5 years’ time with a total investment sum of € 100 mn.
May 7, 2019

MedCruise GA in Kuşadası signals turnaround for Turkish cruise industry
The Association of Mediterranean Cruise Ports, MedCruise, has held its 54th General Assembly in Kuşadası, Turkey’s main cruise port on the Aegean. MedCruise’s preference for this venue testifies to the industry’s renewed interest in Turkey, following several years of decline. MedCruise President Airam Diaz Pastor said that after some improvement in 2019, they expect 2020 to be the beginning of a turnaround for the Turkish and Black Sea cruise industry.
May 10, 2019

Another Turkish company acquired by a Japanese corporation
In recent years, Japanese corporations such as Nikkei, Toyo, Hitachi, and Mitsubishi, to name a few, have spent some USD 2 bn to acquire shares in Turkish companies. Now US-based Sun Chemical, the world’s largest manufacturer of printing inks, which is owned by Japanese DIC Corporation, has taken full control of its competitor Makrochemical Endüstriyel Kimyasalları A.Ş. in Izmir, making it the company’s fourth acquisition in Turkey.
May 8 – 15, 2019

First woman at the helm of BIMCO is from Turkey
The world’s largest international shipping association, The Baltic and International Maritime Council (BIMCO), has elected Ms. Şadan Kaptanoğlu, board member of leading Turkish shipping company Kaptanoğlu Denizcilik, as its President and Chairperson of the Board. Ms. Kaptanoğlu is not only the first Turk, but also the first woman in 114 years to head BIMCO, which represents more than 2,100 members from 123 countries.
May 16, 2019

New tax regulations for low-value goods ordered online from abroad
The Turkish government has decided, among other things, to abolish the tax exemption for goods with a value below 22 Euros ordered online from abroad. This decision, which is meant to protect the domestic market, has met with criticism from Turkey’s cargo and logistics sector. While the practice is regarded as general threat to international e-commerce, it is also pointed out that it may violate Customs Union law and harm Turkish SMEs, the potential damage exceeding the benefits by far.
May 17, 2019

New regulations to curb FX speculation
Aiming to prevent further depreciation of the Turkish lira, Turkey’s Central Bank has introduced a waiting period for foreign exchange purchase transactions of USD 100,000 and more by natural persons. From now on, the purchased FX will be made available by the relevant bank only on the next business day. This is in addition to other measures such as a 0.1 percent tax on US-dollar purchases and cutting the swap interest rate from 25.50% to 24.00%. However, analysts are dubious about the effectiveness of those measures, fearing that the investors’ trust in the system will be undermined.
May 22, 2019

Turkey climbs to 43rd in World Bank’s ‘Doing Business’ ranking
In 2019, Turkey performed well in the index rankings listed in the World Bank Group’s ‘Doing Business Report’, climbing 17 ranks to 43rd overall and earning it a ‘very easy’ classification. The improvement became evident as 45 ranks up in the ‘getting credit’ sub-index, 37 ranks up in the ‘dealing with construction permits’ sub-index, and 30 ranks up each in the ‘trading across borders’ and ‘resolving insolvency’ sub-indices. Also, Turkey ranked among the 10 economies carrying out the most regulatory reforms.
May 29, 2019

Czech energy company ČEZ Group plans to divest its assets in Turkey
The Czech power supply company ČEZ, 50/50 strategic partner of Akenerji-affiliated Akkök Group since 2008, is getting ready to withdraw from the Turkish market where it had invested USD 600 mn. According to CEO Daniel Benes, Turkey is only one market, besides Bulgaria, Romania and Poland, they are leaving to concentrate on the domestic market.
May 30, 2019

U.S. biopharma giant Gilead to take up production in Turkey
Gilead Sciences, an international leader in biotechnology, has entered into a co-operation with the Turkish company Pharmactive İlaç. Within the scope of the agreement, strategic drugs for life-threatening diseases such as HIV, hepatitis B and C and influenza will be produced in Turkey, only the third foreign country besides Canada and Ireland. In future, Gilead aims to produce over 70 percent of its Turkish sales locally, avoiding estimated imports of USD 250 mn in the next 5 years.
May 31, 2019

Sabancı Holding sells TEMSA to True Value Capital Partners
Ownership of TEMSA, a leading global manufacturer of buses, coaches and light trucks, has been passed from Sabancı Holding to Swiss-based True Value Capital Partners for TRY 182.7 mn. Representatives of the two companies expressed their confidence that this share transfer shall mark the start of a new growth period for TEMSA under the leadership of its new investor, with the brand’s target for the North American market being prioritized.
May 31, 2019

Second package of government wind energy tender awarded
The Turkish Ministry of Energy and Natural Resources has carried out its second tender within the scope of the ‘Renewable Energy Resource Zones’ (YEKA-2). This involved the erection and operation of 4 wind power plants of 250 MW each, 14 percent of Turkey’s current wind energy production capacity, with a total investment of USD 1 bn. While Turkish company Enerjisa was awarded the contract for the Aydın and Çanakkale zones, German wind turbine manufacturer Enercon submitted the most favourable bid to win the Muğla and Balıkesir zones. Overall, the new wind farms shall produce at least 3.5 bn kWh per year, meeting the electricity demand of 1.2 million households.
May 31, 2019

U.S. and Turkey take back mutual tariff increases
The United States have reversed their decision from last August to increase the tariffs imposed on steel imports from Turkey, from 25% to 50%. President Donald Trump argued that this was due to a 48% slump in imports of steel products from that country. In response, the Turkish government has cut the additional duties levied on 22 import goods originating in the United States in half. This decision involves various products such as rice, alcoholic beverages, cosmetic products, and passenger cars.
May 17 – 23, 2019

Mounting tensions with Cyprus over offshore petroleum exploration
The Republic of Cyprus has followed through with its threats to issue arrest warrants for the crew of the Turkish drillship ‘Fatih’ over what they regard as illegal exploration drilling in their territorial waters. In addition, complaints were filed against the international companies involved. Turkey’s foreign ministry rebuked this action, claiming that it was contrary to international law.
June 10, 2019

Opposition candidate scores clear win in repeat Istanbul mayoral election
In the elections for Lord Mayor of Istanbul that were ordered to be repeated due to alleged irregularities, the joint candidate of opposition parties CHP and İyi Parti, Ekrem İmamoğlu, has again prevailed over the candidate of the alliance of ruling party AKP with nationalist MHP, Binali Yıldırım. On March 31, İmamoğlu, a hitherto largely unknown local politician, had won the election by a margin of only 13,729 votes over former prime minister Yıldırım. This time around, he scored a comfortable victory, winning 4,741,868 votes (54.21%) while Yıldırım was reduced to 3,935,453 votes (44.99%).
June 24, 2019

Turkish economy continues to contract
In the first quarter of 2019, Turkey’s GDP contracted by 2.6% compared with the same period of the previous year. The quarterly GDP at current prices reached TRY 914.7 bn, but decreased to USD 170.4 bn in dollar terms due to the depreciation of the Turkish lira. Agriculture grew by 2.5%, whereas the industry contracted by 4.3%, the services sector by 4.0%, and the construction industry by as high as 10.9%.
May 31, 2019

Turkish Central Bank keeps interest rate constant
The Central Bank of the Republic of Turkey has kept its policy rate (one-week repo auction rate) constant at 24.00%. According to the bank, the rebalancing trend in the economy has continued and the external demand maintains its relative strength, but the economic activity displays a slow pace, partly due to tight financial conditions. The statement also said that even though the developments in domestic demand conditions and the tight monetary policy support disinflation, the bank has decided to maintain its tight monetary policy due to the risks to pricing behaviour.
June 12, 2019

Moody’s has revised Turkey’s ratings downwards
Moody’s has downgraded the long-term credit rating to B1 while keeping the outlook negative. The agency stated that the risk of a balance of payments crisis continues to rise, and that possible sanctions by the U.S. due to Turkey’s deal to purchase Russian S-400 missile systems pose a threat to the country’s economic and financial system.
June 12, 2019 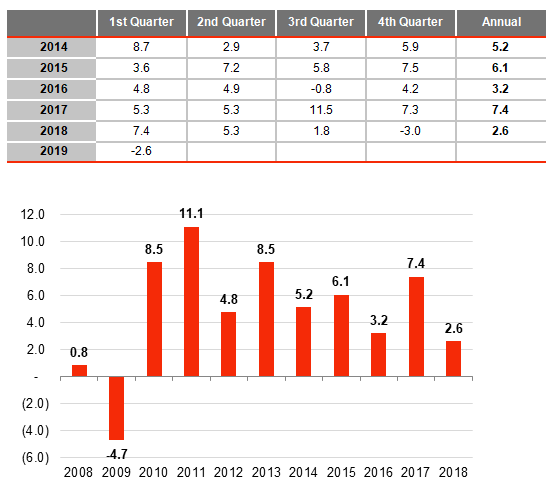 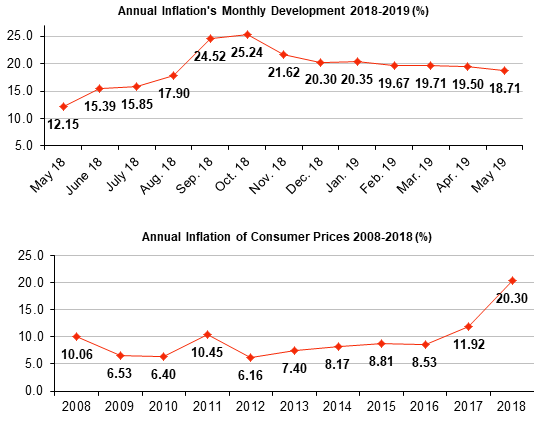