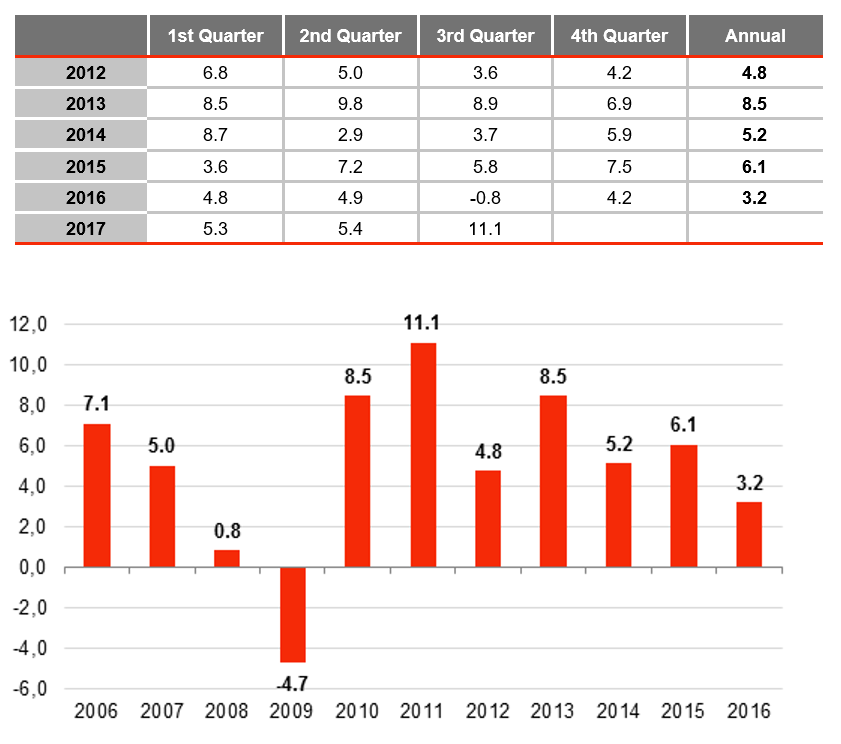 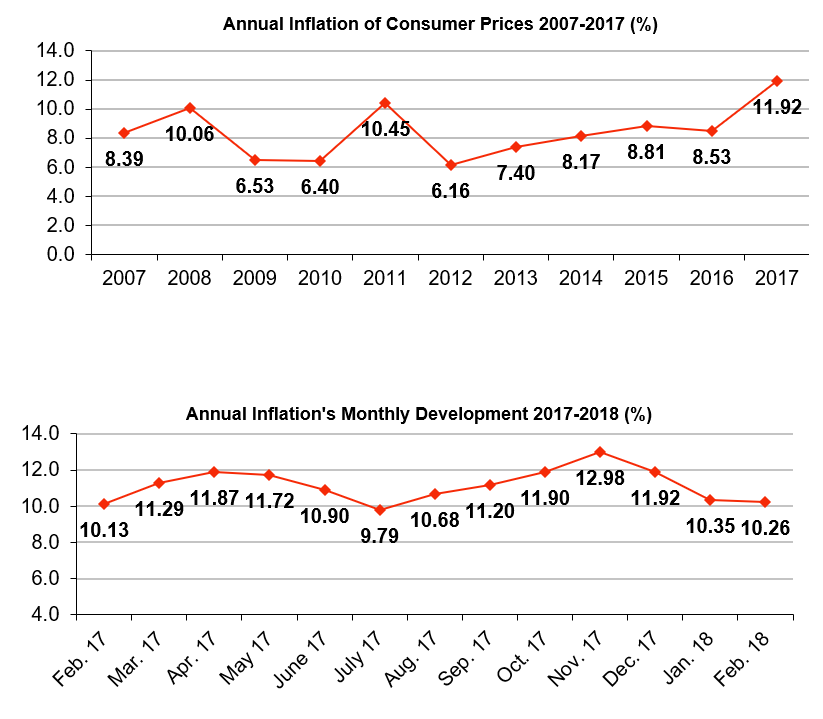 Inflation continues to decelerate
In February 2018, consumer prices in Turkey increased by 0.73% in comparison to the previous month, and by 10.26% over the same month of the previous year (YOY). The highest monthly increase was registered in health (2.57%), followed by food and non- alcoholic beverages (2.24%). The only monthly decrease took place in clothing and footwear (-4.09%). The highest annual increase was in furnishing and household equipment (15.66%). The domestic producer price index (D-PPI) increased by 13.71% YOY, and 2.68% monthly.
March 5, 2018

Central Bank keeps policy rate stable
The Central Bank of the Republic of Turkey has left the overnight lending rate at 9.25%, the one-week repo rate (policy rate) at 8.0%, and the late liquidity window lending rate at 12.75%. The bank reported that the economic activity maintains its strength, domestic demand keeps improving, and external demand contributes positively to exports. The high inflation and inflation expectations create a risk on pricing behaviour; hence, the bank has decided to maintain its tight monetary policy.
March 7, 2018

FDI continues to decrease
In 2017, Turkey’s current account deficit rose sharply by 42%, to USD 47.1 bn, mainly due to the increase in gold and oil imports. Another negative development has been that the foreign direct investments item, which is the most reliable source for financing the deficit, fell by 19%, down to USD 10.8 bn. On the other hand, the number of newly established foreign capital companies increased by 6.3% in 2017 to reach 5,930, Germany still being the leading country with 287 companies despite a drastic decrease down from 403. The main target sector of FDI was finance and insurance, followed by transportation and warehousing. The manufacturing industry came third with the rubber and plastics industry ranking first among its sub-sectors. The main source of FDI was Europe, followed by the Middle East, and the leading countries were the Netherlands, Spain, and Azerbaijan.
Feb. 14 – 15, 2018

Moody’s cuts Turkey’s rating
Moody’s has downgraded the Turkish government’s credit rating to Ba2 from Ba1. This 4decision was based on the rationales that the institutional strength has decreased due to the erosion in the effectiveness of monetary policy and delays in structural economic reforms, as well as an increased risk of an external shock due to the increase in the current account deficit, external debt, political risks and global interest rates. Nevertheless, the agency upgraded Turkey’s outlook from “negative” to “stable” thanks to the country’s economic and fiscal strength, its large and dynamic economy, and favourable government debt metrics. The report’s effect on the capital markets has been limited, as Turkey had already been rated as non-investment grade.
March 9, 2018

Turkish and German heads of government confer in Germany
At the press conference following the meeting with Turkey’s Prime Minister Binali Yıldırım in Berlin, German Chancellor Angela Merkel expressed the wish to intensify contacts with the Turkish government even though she sees many obstacles in front of the normalization of relations. The main topics of the talks were the fight against terrorism, the case of Deniz Yücel, a correspondent for the newspaper Die Welt, who had been arrested in Istanbul a year ago on terror propaganda charges, and the refugee situation. One day after the meeting, Mr Yücel was released from jail and left the country.
Feb. 16, 2018

Ford Otosan has announced that it will produce the first domestically manufactured transmission system in the heavy commercial vehicles segment. Following this EUR 50 mn investment, the share of domestic supply in components shall increase to 90% in truck manufacture. Both manual and automatic transmission systems shall be on the market from 2020 on. Ford Otosan, a JV of Ford Motor Company and Koç Group, is the largest automotive manufacturer in Turkey in terms of production capacity.
Feb. 19, 2018

Turkish Zorlu Holding has signed a strategic agreement with Chinese GSR Capital to establish a battery plant in the city of Manisa with a USD 4.5 bn investment. With a potential capacity of 25,000 MW, the mega battery plant will be capable of supplying batteries for 500,000 electrical vehicles. The export volume of these high value-added products is expected to be USD 6 bn. The investment shall be started in 2018 and completed in 2023. GSR Capital Co-Chair Jianghua Su pointed out that there are already projects for electrical vehicles and renewable energy in Turkey, and that the country has a good investment climate with its high-quality labour force, very successful industry chain, and advantageous geographic location.
Feb. 26, 2018

Japanese pharmaceutical company Astellas has agreed with Turkish Santa Farma on the manufacture of their products sold in Turkey. A USD 3 mn investment shall be carried out for the technology transfer. The first product to be manufactured shall be a drug for the treatment of urinary system disorders, and the immediate target is for Santa Farma to manufacture 25% of Astellas’ products. Mark Dekker, General Manager of Astellas Turkey, stated that they have invested EUR 4 mn for clinical trials in Turkey so far, and that their business has grown by 60% in the last two years.
Feb. 27, 2018

German insurance giant Allianz has announced plans for establishing a technology centre in Istanbul with a EUR 5 mn investment. The centre, which shall be located on the campus of the Turkish-German University, is to include an accredited earthquake laboratory. Apart from this, Allianz has already moved its operations centre to Izmir with a EUR 27 mn investment. Allianz has been active in Turkey for 30 years, with 2,500 employees and 7 million customers today.
Feb. 27, 2018

The Turkish Ministry of Transport, Maritime Affairs and Communications has signed a cooperation agreement with US-based ONF (Open Networking Foundation). According to the agreement, new-generation communication technologies generated at ONF shall be tested in Turkey for the first time in the world. The cooperation includes the fieldwork M-CORD infrastructure for the 5G wireless network.
Feb. 28, 2018