Russia’s AvtoVaz eyeing Iran’s auto market
Russia’s largest carmaker AvtoVaz said it had started talks to launch an assembly line in Iran. “Negotiations are underway with a number of countries, such as Iran,” said Viktor Kladov, the company’s director for international cooperation and regional policy. “I mean both the sales and the assembling,” Russian TASS news agency quoted him as saying.
Feb. 20, 2019

Norwegian plane stranded in Ahvaz finally flies home
A Boeing plan belonging to Norwegian Air that had remained stranded in an airport in Iran’s southwestern city of Ahvaz for months eventually flew home after spare parts – that could not be delivered due to sanctions – were imported to get the aircraft off the ground. The plane had made an emergency landing in Ahvaz in December.
Feb. 23, 2019

EU3 unveil INSTEX to facilitate trade with Iran
Foreign minister of France, Germany and Britain in a joint press conference unveiled a much-awaited mechanism devised for facilitating trade with Iran. INSTEX – as the mechanism is called – would be meant to establish a banking channel to Iran in face of sanctions imposed against the country by the US.
Feb. 01, 2019

FATF renews deadline for Iran to implement standards
The Financial Action Task Force (FATF) said in a statement that it had extended the suspension of countermeasures against Iran for another four months, adding that it recognized Iran’s efforts in meeting its Action Plan. Nevertheless, the anti-money laundering global body said if Iran does not enact the remaining legislation in line with FATF standards by June 2019, then it would require increased supervisory examination for branches and subsidiaries of financial institutions based in Iran.
Feb. 22, 2019

Iran signs wheat trading deal with Russia, Kazakhstan
Iran signed a basic agreement with Russia and Kazakhstan to cooperate in trading of wheat in a move that would take the three countries closer to a regional free trade regime. Based on the deal, Iran would import wheat for its private millers who will produce flour for export to other countries such as Iraq.
Feb. 13, 2019

Govt. to generate $8.8 bn from selling assets of banks
Economy Minister Farhad Dejpasand said the government would launch a one-year program to sell excess properties of 10 major banks to generate as much as USD 8.5 bn. Dejpasand added that the plan envisages relinquishing the excess assets – mostly real estate properties – of the banks.
Feb. 05, 2019

Budget deficit 17% higher than last year
The CBI said in a report that Iran’s budget deficit over a period of nine months starting March 21, 2018 had reached as high as IRR 451.1 trn (USD 3.8 bn), adding that the figure was higher than the same period last year by 17 percent. The CBI added in its report that it had anticipated the deficit to stand around IRR 244 trn (USD 1.8 bn), roughly half of the reported figure.
Feb. 11, 2019

Govt. authorized to borrow $30bn
The MPs in their debates over the budget for the next year’s fiscal authorized the government to borrow USD 30 bn in foreign finance. The funds thus obtained can be used by private companies, cooperatives, as well as non-governmental institutions and knowledge-based companies, the MPs approved.
Feb. 18, 2019

Iran’s exports to neighbours at $20.6 bn
Figures released by the Customs Administration of Iran showed the country’s exports to its neighbours over a period of 10 months starting March 21, 2018 stood at USD 20.6 bn, marking a rise of 22 percent compared to the same period last year.
Feb. 19, 2019

Iran’s trade with Europe down
The Customs Administration of Iran in a report said the country’s non-oil exports to Europe over a period 10 months starting March 21, 2018 had reached USD 900 mn, indicating a decline of 27.3 percent compared to the same period last year. Iran’s imports from Europe had also reached USD 7.6 bn, registering a drop of 17.6 percent over the same period.
Feb. 22, 2019

Major rise in prices of red meat, poultry
Figures released by the SCI showed that the prices of red meat and poultry saw a rise of 92.7 percent over the past Iranian month (Jan. 21-Feb. 21) compared to the same period last year. This rise was described by the SCI as the highest ever in the group of Food and Beverages.
Feb. 24, 2019

House prices in Tehran up 86%
Figures released by the CBI show that the price of each square meter of a residential unit in Tehran reached as high as IRR 100.6 million during the past calendar month (21 Jan.-21 Feb.), marking a rise of 86 percent compared to the same period last year.
Feb. 24, 2019

CBI bans POS devices abroad
The CBI announced that it had started to enforce a ban for all Iranian banks to use POS devices abroad. The move, the media said, was part of efforts by the CBI to crack down on capital flight which the banks partly blame for the current currency market volatility.
Feb. 27, 2019

Housing sector sees first rise in nine months
Home sales in Tehran – that had dropped due to poor economy – showed a rise of 39 percent in the last Iranian calendar month of Bahman (Jan. 21-Feb. 21). The CBI said in a report that rise in home sales figures was the first in nine months.
Feb. 27, 2019 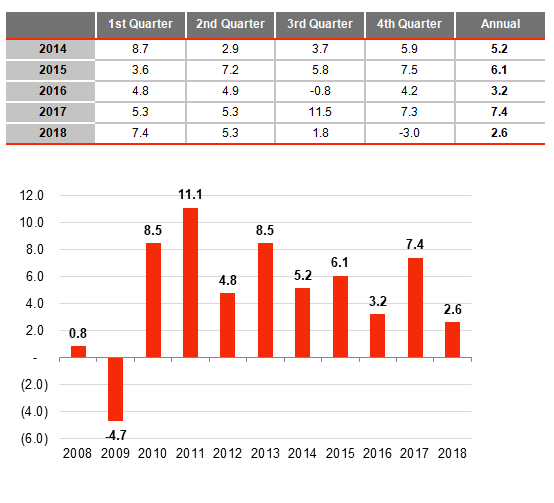 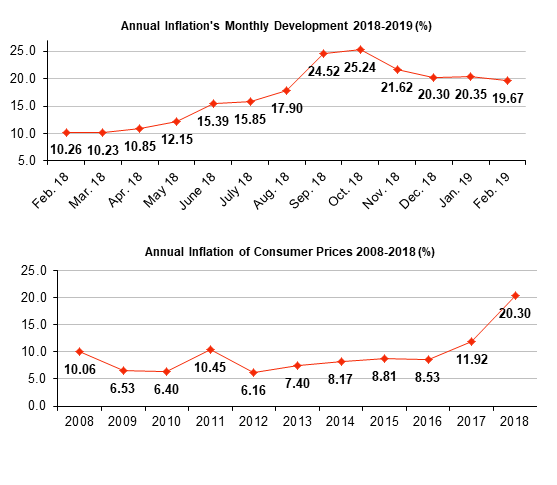