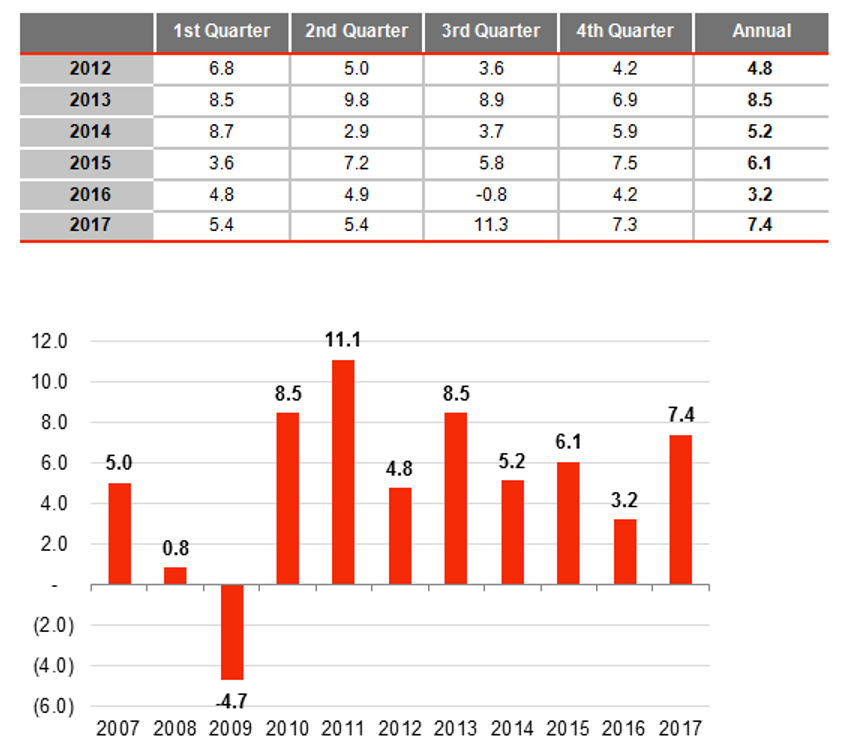 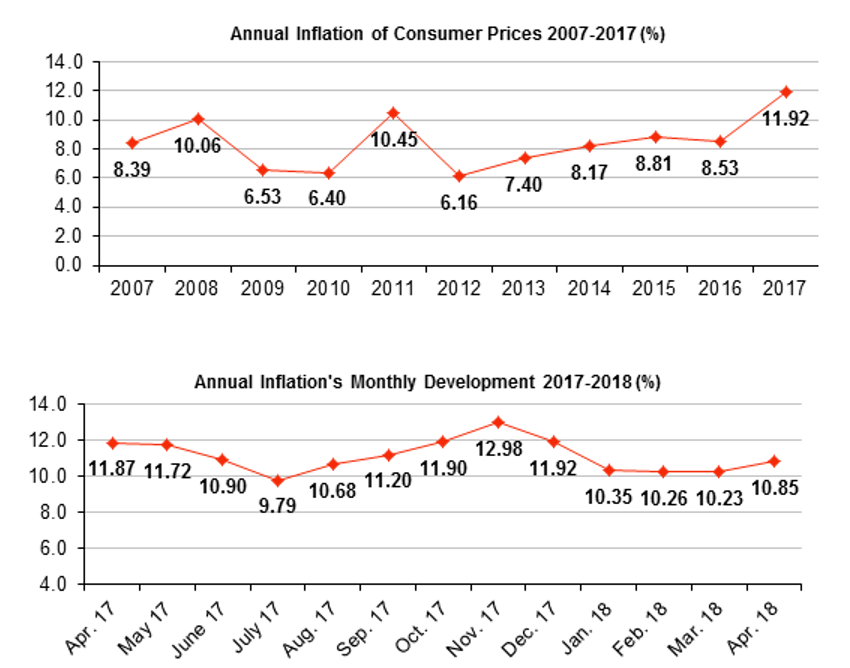 Inflation accelerates
In April 2018, consumer prices in Turkey increased by 1.87% in comparison to the previous month, and by 10.85% over the same month of the previous year (YOY). The highest monthly increase was registered in clothing and footwear (10.40%), followed by transportation (3.54%). Slight monthly decreases took place in food and non-alcoholic beverages (-0.21%) as well as in communication (-0.04%). The highest annual increase was in furnishing and household equipment (16.75%). The domestic producer price index (D-PPI) increased by 16.37% YOY, and 2.60% monthly.
May 3, 2018

Central Bank increases the late liquidity window lending rate
The Central Bank of the Republic of Turkey has left the overnight lending rate at 9.25%, and the one-week repo rate (policy rate) at 8.0%. On the other hand, the late liquidity window lending rate has been increased from 12.75% to 13.50%. The bank reported that the economic activity maintains its strength, domestic demand keeps improving, and external demand contributes positively to exports. The high inflation and inflation expectations create a risk on pricing behaviour; and upside movements in import prices have increased such risks. Hence, the bank has decided to implement a measured monetary tightening.
April 25, 2018

Standard & Poor’s (S&P) cuts Turkey’s rating
S&P has cut the sovereign debt rating on Turkey to BB- from BB, claiming an increase in macroeconomic imbalances. The international rating agency also voiced concerns over a deteriorating inflation outlook as well as the long-term depreciation and volatility of Turkey’s exchange rate. On the other hand, the agency upgraded the country’s outlook from negative to stable.
May 2, 2018

Early elections to be held on June 24
Turkish President and leader of the ruling Justice and Development Party (AKP), Recep Tayyip Erdoğan, has accepted a proposal by Devlet Bahçeli, the leader of the Nationalist Movement Party (MHP), to hold early elections, both parliamentary and presidential, and scheduled them for June 24. The official reasoning behind this unexpected move is that the transition to the presidential system, initially planned for end-2019, needs to be faster in the interest of the country. After the decision had been approved by the majority of parliament, the Supreme Electoral Council carried out the required procedures, and announced that six presidential candidates will be permitted to stand in the elections: Recep Tayyip Erdoğan, Muharrem İnce, Selahattin Demirtaş, Meral Akşener, Temel Karamollaoğlu, and Doğu Perinçek.
April 19 – May 10, 2018

EU announces Turkey Progress Report 2018
According to the annual report presented by the European Commission, Turkey has been moving away from the EU. The report calls for the state of emergency in Turkey to be lifted without delay, claiming that widespread dismissals, arrests, and detentions since the attempted coup under the state of emergency continue to raise serious concerns, and that furthermore the emergency decrees have curtailed freedom of expression. On the other hand, Turkey’s efforts to provide humanitarian aid for the refugees from Syria and other countries are being praised in the report. Regarding the economic criteria, it has been stated that the Turkish economy can be considered a functioning market economy, achieving strong growth in 2017 supported by government stimulus measures. However, according to the report, the current account deficit that makes the country vulnerable to external shocks, while the double-digit inflation and the ongoing depreciation of the Turkish lira create macroeconomic imbalances.
April 18, 2018

State of emergency extended for the seventh time
The majority of the Turkish parliament has granted the government’s request to extend the state of emergency for another three months as from April 19, 2018. Accordingly, the total duration of this ostensibly temporary measure, which had been introduced as from July 21, 2016 following the coup attempt, which grants the government extraordinary powers not only in the fight against terrorism, will reach two years. April 18, 2018

The Turkish construction industry has grown by 8.9% in 2017, reaching an employment figure of over 2 million people. The main reasons for the strong growth have been the measures taken by the government to boost economic activity, and the sales campaigns by some construction companies. Despite this strong growth in 2017, İMSAD (Association of Turkish Construction Material Producers) reported that the five main negative developments, which have been observed in the first quarter of 2018, are expected to continue in the second quarter as well. These trends were the decrease in real estate sales and renting activity, decrease in new constructions, increase in operational capital need of contractors, slowdown in payments of the public sector, and extension of payment terms.
April 3, 2018

The groundbreaking ceremony of the first nuclear plant in Turkey has been held in Akkuyu (Mersin province) with the participation of Turkish President Recep Tayyip Erdoğan and Russian President Vladimir Putin. The plant shall be built by the Russian state corporation Rosatom with a USD 20 bn investment. It is planned to have 4,800 MW installed capacity and generate 10% of the total electricity demand in Turkey. Its first reactor is to be commissioned in 2023.
April 4, 2018

23 investment projects with a total investment volume of TRY 135 bn have been announced to benefit from project based incentives. More than 34,000 people are to be employed directly in these investment projects, which are expected to provide an increase in Turkish exports by USD 6.3 bn, and a decrease in imports by USD 12.3 bn. The main incentives to be provided to these projects shall be tax support, such as VAT and customs duty exemption, land allocation, financial support and employment support. Among the 23 investment projects, the largest one is Vestel’s TRY 28.4 bn electrical vehicle energy storage system investment, closely followed by SASA’s TRY 28.1 bn petrochemicals investment, and Tosyalı’s TRY 28.0 bn integrated mining investment. The main projects by foreign capital companies shall be Siirt Bakır’s TRY 2.1 bn cathode copper investment, Dow Aksa’s TRY 1.9 bn carbon fibre investment, and Oyak Renault’s TRY 493 mn hybrid engine investment.
April 10, 2018

Turkish MetCap Energy Investments and Qatari Fusion Dynamics have agreed to build natural gas and petrochemicals facilities in Turkey for USD 5.2 bn. The petrochemical plant to be built in the Thrace basin has been planned to manufacture polypropylene and polyethylene at an amount equal to 30% of Turkey’s total imports. The production capacity shall be 2.6 million tons of methanol and 1 million tons of light olefin; and using these materials, 600,000 tons of polypropylene and 400,000 tons of polyethylene are planned to be manufactured. The natural gas combined cycle plants to be established in Kırklareli and Karaman provinces shall have 550 MW total installed capacity and generate power equal to 5% of Turkey’s electricity production. All investments within the project scope shall be completed by 2023.
April 9 – 11, 2018

Oyak Renault shall make a TRY 493 mn investment in the city of Bursa to manufacture Renault’s first hybrid engines. Those engines shall be used in the fifth-generation Clio model to be manufactured in Bursa starting in the last quarter of 2018. The project shall create employment for 110 people directly, and 440 people indirectly. The Bursa plant is one of the largest plants of the Renault Group, with a production volume of 365,000 passenger cars and almost 600,000 engines in 2017.
April 15, 2018

98.8% shares in the Turkish freight shipping operator U.N. Ro-Ro have been sold to the Danish shipping and logistics company DFDS for EUR 950 mn. U.N. Ro-Ro, with 12 ro-ro ships, as well as port terminals in Pendik (Turkey) and Trieste (Italy), operates five ro-ro lines connecting Italy and France with Turkey. The sales transactions are to be completed following the approvals of the Turkish, Austrian, German and Italian competition authorities in June 2018.
April 13, 2018

DowAksa, a partnership of the American Dow Chemical Company and Turkish Aksa Akrilik, shall make a TRY 1.9 bn investment to increase its carbon fibre production capacity in the province of Yalova. Following the investment, the capacity shall increase from 3,500 tons to 13,400 tons, and the company shall reach a global market share of 10%. Dow Aksa is the first and only carbon fibre manufacturer in Turkey.
April 16, 2018

Siirt Bakır, a Turkish-Qatari partnership, shall manufacture cathode copper by 2020, following an investment of TRY 2.1 bn in the province of Siirt. The production target has been announced as 400,000 tons of cathode copper, which is planned to decrease Turkey’s current account deficit by USD 2.8 bn. Within the scope of the investment, it has been also planned to establish a fertilizer plant to process the 600,000 tons of sulfuric acid to be generated by the copper plant. The facility shall provide employment opportunity for 1,000 people directly, and 10,000 people indirectly.
April 25, 2018

The Gates Corporation, an application-specific fluid power and power transmission solutions provider from Denver, Colorado, has acquired the Turkish automotive rubber parts manufacturer Rapro. Rapro is based in Izmir, serves customers in more than 40 countries, and generates an annual turnover of USD 25 mn. The value of the deal has not been disclosed.
April 30, 2018

The Turkish government has introduced a restructuring plan for tax and premium payments, and decreased the VAT on housing, with an aim to support domestic economic activity. The receivables subject to the restructuring belong to the Ministry of Finance, Ministry of Customs and Trade, Social Security Institution, special provincial administrations, municipalities, Department of Monitoring and Coordination of Investments. These receivables shall include declaration-based taxes and penalties on these taxes, interests for late payments and late fees, customs duties, and social security premiums. The deadline of applications for restructuring shall be July 31. Besides that, the 18% VAT rate on sales of certain housing has been lowered to 8% until October 31.
May 2 – 7, 2018