Coats inaugurates its third global innovation centre in Turkey
Coats, a leading industrial sewing thread manufacturer headquartered in the UK, has established its third global innovation centre in the city of Bursa, following the U.S. and China. Rajiv Sharma, Coats’ CEO, stated that they chose Bursa because of the availability of highly skilled labour in engineering, physics, and chemistry. 60 people will be employed in this hub for the EMEA region. Coats Turkey has been active for 50 years, exporting 60% of its production.
Apr. 5, 2019

Honda phases out production in Turkey
Honda, which has been producing cars in Turkey for 22 years, has announced that the production in its Kocaeli plant will end in 2021 because of the global developments in electromobility, requiring the company to adapt its production capacity accordingly. However, Honda will continue its import, distribution, and after-sales operations in Turkey. 1,100 people are currently employed in the facility.
Apr. 9, 2019

Uber downsizes in Turkey
Following the regulation issued last year which has prevented UBER from providing services on a sound basis, the company has announced that it will downsize its operations in Turkey. As the XL size vehicles have been increasingly seized by the authorities, UBER has decided to continue its operations with yellow taxis, and to decrease the number of XL vehicles.
Apr. 9, 2019

Merck opens R&D centre in cooperation with Sabancı University
German pharmaceuticals manufacturer Merck has inaugurated an R&D and application centre in Istanbul in cooperation with the Nanotechnology Research and Application Centre of Sabancı University (SUNUM). The centre will operate in the field of biotechnological product development.
Apr. 11, 2019

Opposition leader attacked
Kemal Kılıçdaroğlu, the leader of the Republican People’s Party (CHP), has been punched and thrown stones at by a mob at the funeral of a soldier who had been killed in fighting against the PKK (Kurdistan Workers’ Party). The opposition leader took refuge in a village house and was later ushered from the scene in an armoured vehicle. The attackers have been released by the court under judicial control.
Apr. 21 – 23, 2019

Istanbul mayoral elections re-run
Based on the grounds that some electoral officials were not civil servants as required by law, the Supreme Election Council (YSK) has decided to re-run the mayoral elections in Istanbul, and annul the certificate of election given to the initially proclaimed winner, Ekrem İmamoğlu, the candidate of the main opposition party Republican People’s Party (CHP). The European Parliament has criticized the decision, saying it ends the credibility of democratic elections in the country. The Turkish lira has sharply depreciated following the decision amid concerns of political instability. The election will be re-held on June 23.
May 7, 2019

Turkey plans offshore drilling in the Eastern Mediterranean
Turkey’s drillship “Fatih” has started preparations for offshore drilling operations in an area claimed by Cyprus as its exclusive economic zone. The Cyprus government has threatened to have an international arrest warrant issued for the Turkish ship’s crew. The European Union and the United States have expressed their concerns over Turkey’s intentions, stating that Cyprus has the sole right to exploit natural resources within this zone.
May 8, 2019

Inflation still close to 20%
In April 2019, consumer prices in Turkey increased by 1.69% in comparison to the previous month. The CPI went up by 19.50% over the same month of the previous year (YOY). The highest monthly increase was registered in alcoholic beverages and tobacco (6.77%), ahead of clothing and footwear (5.36%). The only monthly decrease took place in communication (-0.30%). The biggest annual increase was in food and non-alcoholic beverages (31.86%). The domestic producer price index (D-PPI) increased by 2.98% monthly, and by 30.12% YOY.
May 3, 2019

Turkish Central Bank keeps interest rate constant
The Central Bank of the Republic of Turkey has kept its policy rate (one-week repo auction rate) constant at 24.00%. According to the bank, the rebalancing trend in the economy has continued and the external demand maintains its relative strength, but the economic activity displays a slow pace, partly due to tight financial conditions. The statement also said that even though the developments in domestic demand conditions have led to some improvement in the inflation indicators, risks to price stability continue to prevail due to higher food and import prices and the elevated course of inflation expectations. Hence, the bank has decided to maintain its tight monetary policy until the inflation outlook displays a significant improvement.
Apr. 25, 2019 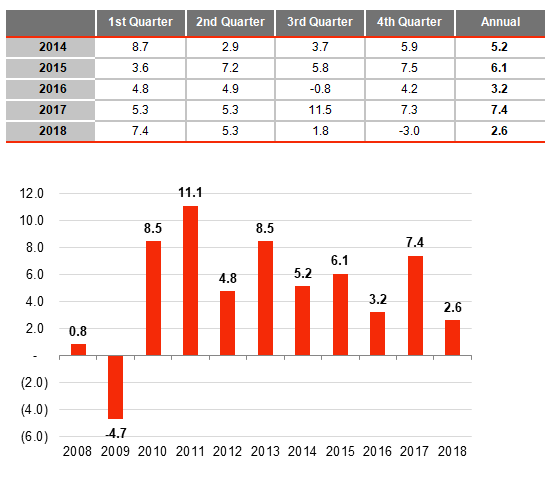 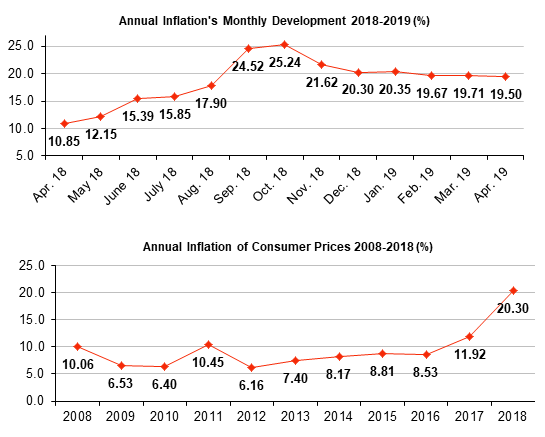