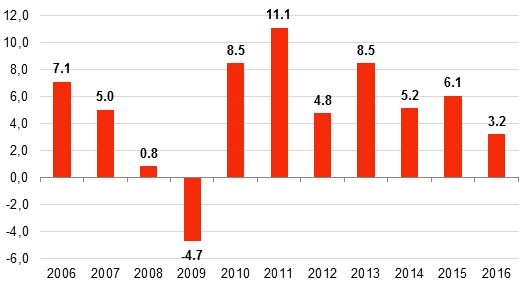 Inflation continues to accelerate
In October 2017, consumer prices in Turkey increased by 2.08% in comparison to the previous month, and by 11.90% over the same month of the previous year (YOY). Accordingly, the increase in CPI-YOY continued its upward trend. The highest monthly increase was registered in clothing and footwear (11.51%). The only significant monthly decrease took place in recreation and culture (-1.75%). The highest annual increase was in transportation (16.79%). The domestic producer price index (D-PPI) increased by 17.28% YOY, and 1.71% monthly.
Nov. 3, 2017

Central Bank keeps policy rate stable
The Central Bank of the Republic of Turkey has left the overnight lending rate at 9.25%, the one-week repo rate (policy rate) at 8.0%, and the late liquidity window lending rate at 12.25%. The bank reported an ongoing recovery in the economic activity and domestic demand, stating that the demand from the EU countries continues to support Turkish exports. Due to the high level of inflation, which creates a risk on pricing behaviours, the bank has decided to maintain its tight monetary policy.
Oct. 26, 2017

State of emergency extended by another three months

The majority of the Turkish parliament has granted the government’s request to extend the state of emergency for another three months as from October 19, 2017. Accordingly, the total duration of this extraordinary measure, which had been introduced as from July 21, 2016 to facilitate the fight against terrorism following the coup attempt, will reach 18 months.

Right-wing politician Meral Akşener, a former Minister of the Interior, has launched a new party with the attribute “İyi”, which means “Good”. 8 lines in the sun-shaped party logo represent the notions of hope, determination, justice, future, knowledge, richness, courage, and civilisation. Mrs. Akşener has been a prominent opponent with her campaign for a No vote in the referendum held in April for constitutional amendments to transform Turkey’s political system into a presidential model. The new party is expected to attract votes particularly from the centre-right.

Turkish aviation company Alp Havacılık has commissioned its utility helicopter manufacturing facility in the city of Eskişehir. The USD 90 mn investment is a result of joint efforts by the Undersecretariat for Defence Industries (SSM), Turkish Aerospace Industries (TUSAŞ), Alp Havacılık, and Lockheed Martin. 800 people, including 180 engineers, will be employed in the facility. 109 helicopters will be manufactured for the USD 3.5 bn project, with TUSAŞ being the main contractor. The first helicopter is planned to be delivered in 2021. Dan Schultz, President of Sikorsky Aircraft, called the plant the most advanced in the world in terms of production techniques and quality. Oct. 4, 2017

Shell has decided to enter the Turkish electricity retail market. Turkey will be the fourth country in Europe where Shell is active in this market. David Wells, Head of Shell Energy Europe, stated that Turkey is a fast-developing country where the energy demand is increasing. Shell will start retail electricity sales first with industrial and commercial subscribers. Oct. 5, 2017

American data centre service company Equinix has acquired the Istanbul One data centre from British Zenium for USD 93 mn. Following the acquisition, the data centre will be renamed Equinix IS2, as it will be Equinix’s second data centre in Istanbul. Eric Schwartz, President of Equinix EMEA, underlined Istanbul’s importance as regional hub for connectivity and technological infrastructure in parallel with economic growth in Turkey. Oct. 10, 2017

Turkish telecommunication company Turkcell has established a strategic partnership with Siemens to provide digital service solutions for energy efficiency. Through these services, it is targeted to decrease the energy costs of both private and corporate users by up to 30%. It is planned to be a compact service combining Siemens’ software development power and Turkcell’s expertise in mobile digital services. Oct. 11, 2017

A. Schulman, the U.S.-based manufacturer of plastics and composites, has commissioned its plant in Çerkezköy. The plant will manufacture high quality additives and master batches for the Turkish, Middle Eastern and African markets, with an annual production capacity of 17,500 tons. Heinrich Lingnau, A. Schulman’s Senior Vice President and General Manager of EMEA, stated that Turkey has become a main passage point for the regional trade, and this will help them increase their share in a fast-growing market. Oct. 12, 2017

The Marriott Group has announced to build twenty new hotels in Turkey in the next decade with Four Points by Sheraton brand, Turkish ER Yatırım being their local strategic partner. The total investment amount is expected to reach USD 300 mn. Phil Andreopoulos, Vice President of the Marriott Group, stated that Turkey is their fifth largest market in Europe, and that they believe that the problems in the region shall be solved in the very short term. Oct. 19, 2017

The Baku-Tbilisi-Kars railway has been commissioned in a ceremony in Baku with the participation of Azerbaijani President Ilham Aliyev, Turkish President Recep Tayyip Erdoğan, and Georgian Prime Minister Giorgi Kvirikashvili. The 838 km long railway shall be a part of the “Iron Silk Road” between London and Beijing. Through this project, Turkey will become an alternative to the railway through Russia for freight transportation between Europe and Asia. The current capacity of the railway is 1 million passengers and 6.5 million tons freight, which is expected to increase to 3 million passengers and 17 million tons freight by 2034. Oct. 31, 2017

Franklin Templeton, a leading investment management company, has acquired shares of the Turkish Gözde Girişim for TRY 46.2 mn. Through this partnership, Gözde Girişim expects to attract new foreign investors to Turkey. Gözde Girişim is one of the largest private equity companies in Turkey with its USD 450 mn asset size. Oct. 31, 2017