Jacobs Douwe Egberts acquires Turkish tea producer Ofçay
Dutch beverage company Jacobs Douwe Egberts (JDE) has announced a joint venture with the Turkish tea producer Ofçay. Accordingly, JDE shall acquire the entire shares of Ofçay, while the owners of Ofçay shall acquire some shares of JDE’s Turkish subsidiary. Both companies shall contribute their existing local assets and operate under the same umbrella. JDE has stated that the partnership will provide new growth opportunities in the Turkish market and create a synergy by combining JDE’s international expertise in coffee with Ofçay’s local expertise in tea. Ofçay was established in 1985 when the state monopoly in the tea industry was abolished, and currently operates 5 tea processing plants in Turkey with a total processing capacity of 18,500 tons.
Sep. 26, 2018

Vodafone appoints Turkish CEO Timuray as CEO of the European Region
Serpil Timuray, Vodafone Turkey’s CEO since 2009, has been appointed as Vodafone’s CEO Europe Cluster, a region which comprises Albania, the Czech Republic, Greece, Ireland, Hungary, Malta, Portugal, Romania, and Turkey. In this capacity she also oversees Vodafone’s interest in the Netherlands joint venture with Liberty Global. She had already been a member of Vodafone’s Executive Committee since January 2014. In her new position, she shall continue to serve as Chairperson of Vodafone Turkey.
Oct. 2, 2018

Lohmann commissions plant in Gebze
German company Lohmann, a leading global adhesives manufacturer, has commissioned its plant in Gebze (Kocaeli province). Lohmann shall use this plant not only for the Turkish market, but also as an export base for the markets in the Middle East. Andreas Tanzer, Managing Director of Lohmann’s Business Unit EMEA, listed Turkey’s strong industrial infrastructure and the tendency of Turkish consumers to prefer local suppliers as main factors in their decision to establish this plant. Lohmann had already been active in Turkey with a sales office since 2011.
Oct. 9, 2018

Prosegur enters Turkish market
Global private security company Prosegur, which is headquartered in Madrid and employs over 175,000 people worldwide, wants to expand its activities to Turkey. Metin Kastro, Director of Prosegur Turkey, stated that the company took the market entry decision following a feasibility study initiated in 2016. He added that since the current penetration rate in the Turkish security sector is only 2%, which is much lower compared to 9% in Spain and 20% in the US, they aim to increase this rate and enlarge the market. Prosegur plans to hire 500 people in Turkey in the next four years.
Oct. 17, 2018

Oyak Renault breaks ground for aluminium engine block facility
The 50-year-old JV of Renault and Turkish Oyak Group has broken the ground for its new plant in Bursa, which shall manufacture aluminium engine blocks as Turkey’s first high-pressure aluminium injection plant. These blocks shall be used in Renault’s high-technology new-generation engines which have been developed for hybrid vehicles. The greater part of the production shall be exported. The EUR 100 mn investment shall benefit from the Turkish government’s project-based investment incentive system. An additional 100 jobs are expected to be created in the new plant.
Oct. 20, 2018

Arçelik commissions new television plant
Turkish consumer electronics giant Arçelik has commissioned a new-generation TV plant in Çerkezköy (Tekirdağ province) following an investment of TRY 500 mn. The smart plant has been established on an area of 182,000 sqm. The production processes in the plant shall be controlled through software-based fully automatic systems, which will increase both the efficiency and quality. With this investment, Arçelik has reached a TV manufacturing capacity of 3.2 million units. 65% of the new plant’s production is planned to be exported to 48 countries worldwide.
Oct. 25, 2018

Official inauguration of new Istanbul Airport
The new airport built on the European side of Istanbul, simply named Istanbul Airport, has been officially inaugurated with a ceremony attended by Turkish President Recep Tayyip Erdoğan and several other heads of state. The airport’s current annual passenger capacity is given as 90 million, which is expected to reach 200 million after all construction stages are completed in 2023. Istanbul Airport, with a total projected investment cost of EUR 10.2 bn, shall eventually become the world’s largest airport with 76.5 mn sqm of built-up area. The international code of the airport will be ISL.
Oct. 30, 2018

Reductions for taxes on automotive, white goods, furniture and housing are announced
Turkish Minister of Treasury and Finance Berat Albayrak has announced tax reductions to be valid until the end of 2018. Accordingly, the excise duty on motor vehicles less than 1600 cc has been decreased by 15 points, the excise duty on white goods has been lifted, the VAT on commercial vehicles has been cut from 18% down to 1%, and the VAT on furniture has been lowered from 18% down to 8%. In addition, the existing discount on title deed fees, from 4% to 3%, as well as the reduction on housing sales VAT, from 18% to 8%, shall continue until Dec. 31, 2018.
Oct. 31, 2018

Turkish and German ministers meet in Ankara
Turkish Minister of Treasury and Finance Berat Albayrak has welcomed the German Minister of Economy and Energy, Peter Altmaier, together with representatives of more than 30 German companies in Ankara. Altmaier stated that his government is determined to further develop mutual relations and to support SMEs in Turkey. He added that the German and the Turkish side have discussed possible co-operations on new energy technologies, conventional energy investments, and several investments with new technologies in different areas.
Oct. 26, 2018

Local elections in Turkey shall be held in March 2019
The date of the local elections has been officially announced as March 31, 2019, as published in the Official Gazette. For those civil servants who want to be a candidate in the elections, Dec. 1, 2018 has been declared as the deadline for resignation.
Oct. 26, 2018

Erdoğan, Putin, Merkel and Macron meet in Istanbul
The leaders of Turkey, Russia, Germany and France have discussed the recent political situation in Syria in a meeting held in Istanbul. In a joint statement following the summit, the leaders emphasized the importance of the sovereignty and territorial integrity of Syria. President Putin declared that Russia reserves its right to support the Syrian government against various provocations, while President Erdoğan reminded of his country’s expectation that the EU fulfils its commitment towards Turkey’s efforts to accommodate Syrian refugees.
Oct. 27, 2018

Turkish prosecutor confirms Khashoggi murder in the Saudi Consulate
Following investigations into the death of Saudi dissident journalist Jamal Khashoggi in the Consulate General of Saudi Arabia in Istanbul on October 2, Turkish chief prosecutor Irfan Fidan has announced that Khashoggi was strangled and killed immediately after entering the Consulate. According to the findings, his body was then dismembered and destroyed in line with advance plans. The Kingdom of Saudi Arabia denies any involvement of its royal family in the murder.
Oct. 31, 2018

USA exempts Turkey from Iran sanctions
The US administration has exempted Turkey and seven other countries from the latest sanctions imposed on Iran, allowing them to buy crude oil from this country for the time being. Turkey was the fourth largest buyer of Iranian oil in 2017. The Turkish Lira appreciated following the announcement of the exemption, bringing the USD/TRY rate down to below 5.40, the lowest level of the last three months.
Nov. 6, 2018

Turkish Central Bank keeps the interest rate constant
The Central Bank of the Republic of Turkey has kept the policy rate (one week repo auction rate) constant at 24.00%. According to the bank, the external demand maintains its strength, but the slowdown in economic activity continues, partly due to tighter financial conditions, the price increases in the subsectors reflecting the movements in the exchange rates. Even though weaker domestic demand mitigates the deterioration in the inflation outlook, upside risks on the pricing behaviour continue to prevail. Hence, the bank has decided to maintain its tight monetary policy.
Oct. 24, 2018 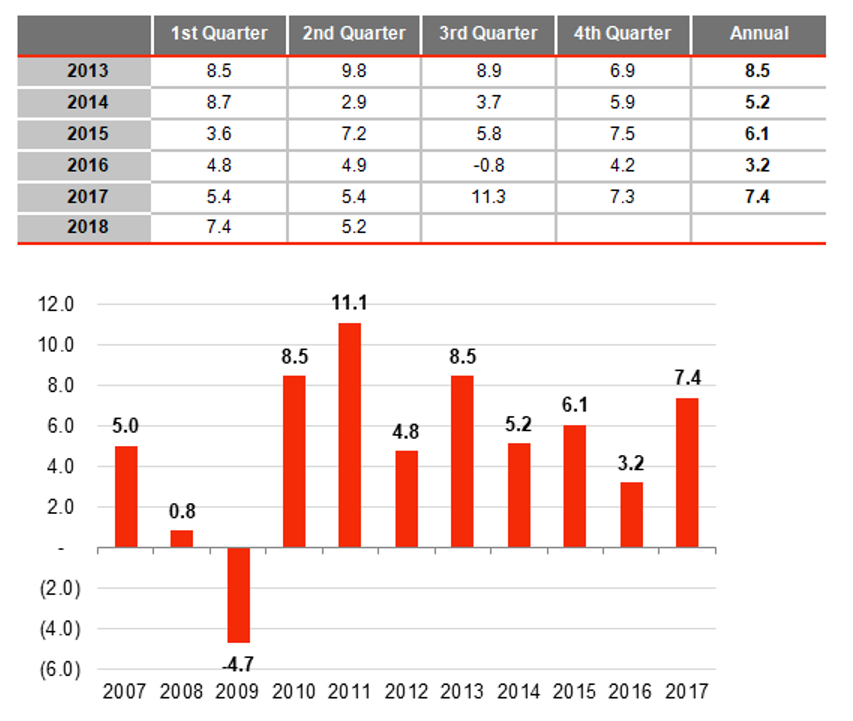 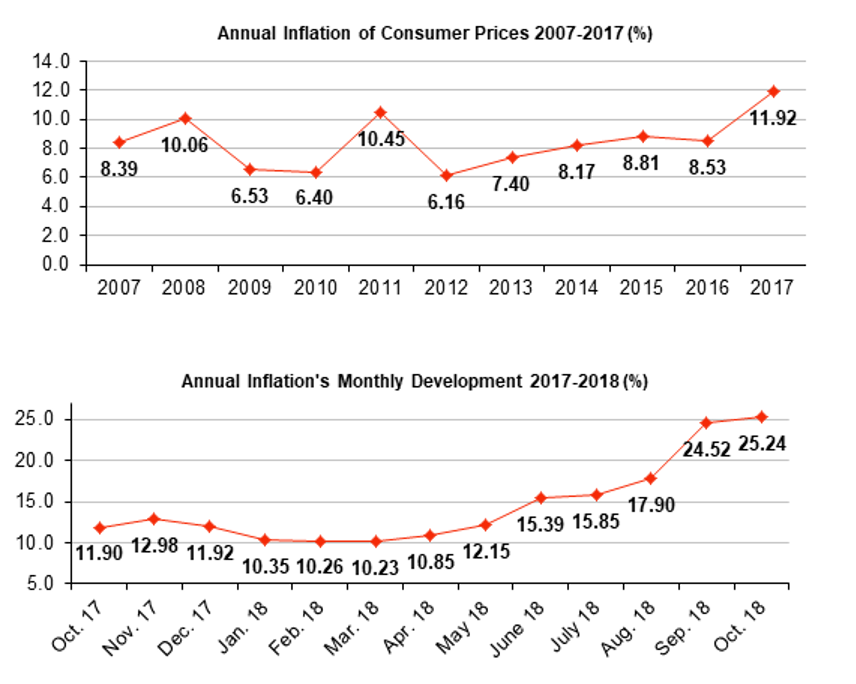