VavaCars enters Turkish market
Dutch energy and commodity trading company Vitol Group has entered the Turkish second-hand car market with the VavaCars brand. In the words of Lawrence Merritt, CEO of VavaCars Turkey, Turkey is a large country with a young population and dynamic market, and they will use their Istanbul office as a hub to enter other countries. VavaCars cooperates with Petrol Ofisi, a leading fuel products distribution, lubricants and chemicals company, owned by Vitol Group. Currently there are five VavaCar centres at Petrol Ofisi fuel stations in Istanbul.
Oct. 1, 2019

La Lorraine about to complete EUR 25 mn investment
Together with the current project to be completed by the end of this year, the total investment volume of Belgian bakery products manufacturer La Lorraine in Turkey will reach EUR 100 mn. La Lorraine entered the Turkish market five years ago, and positioned the country as a manufacturing hub for the MENA region. The company expects 30% growth for 2019, and targets the same for 2020.
Oct. 4, 2019

Allianz opens earthquake centre in Istanbul
Following an investment of TRY 30 mn, German insurance giant Allianz SE has inaugurated its Technical Earthquake and Fire Test and Training Centre on the campus of the Turkish-German University in Istanbul. This is the company’s first test centre outside of Germany, and the first facility in Turkey capable of carrying out fire and earthquake tests according to the international accreditation standards under one roof. Sergio Balbinot, Board Member of Allianz Group, stated that Allianz has invested more than EUR 1 bn in Turkey since 2008, which indicates that investing in this country is on top of their agenda.
Oct. 16, 2019

Decree on electronic invoicing issued
The Turkish Revenue Administration has issued General Decree No. 509 on the Tax Procedure Law to govern the obligation of e-invoices, e-archive invoices, e-ledgers, e-delivery notes, e-self-employment receipts, e-tickets, and e-producer receipts for 2020 and the following years. Accordingly, those taxpayers obliged to change over to e-invoices have to switch to e-archive invoices at the same time.
Oct. 20, 2019

New taxes to be introduced
A draft law on new tax measures has been submitted to the Turkish parliament. Accordingly, the corporate income tax shall be reduced to 18%, employees with an annual gross income higher than TRY 500,000 shall be subject to an additional income tax of 4-5%, a precious housing tax of 1% shall be levied on homes with more than TRY 5 mn value, taxes on foreign exchange deposit interest revenues shall be increased by up to 20%, digital service providers shall be liable to a 7.5% tax, and a special tax of 2% shall be introduced on hotel accommodation.
Oct. 24, 2019

Eti Maden breaks ground for Turkey’s first boron carbide plant
The partnership of state-owned Eti Maden mining company with private defence industry companies has broken ground for Turkey’s first boron carbide manufacturing facility in Bandırma, a district of Balıkesir province. The total investment volume has been calculated as USD 70 mn, and production is scheduled to commence in 2 years. The initial capacity of the facility, which is to produce and export high-technology armour and boron-containing products for various industries such as nuclear energy, has been planned as 1,000 tons per year. China Machinery Engineering Corporation (CMEC) will be the main contractor of the facility.
Oct. 24, 2019

Turkey climbs to 33rd in World Bank’s ‘Doing Business’ ranking
Turkey has climbed 10 ranks in the World Bank Group’s Doing Business 2020 index to 33rd. According to the Turkish Ministry of Treasury and Finance, this success is the result of reforms carried out with regard to starting business, paying taxes, procurement of electricity, registry of deeds, and foreign trade.
Oct. 25, 2019

Deadline for registration of data controllers nearing
In line with the Personal Data Protection Law no. 6698, companies processing personal data have to register their data controllers in VERBİS (the Data Controllers Registry Information System). The deadline is Dec. 31, 2019 for companies with than 50 employees or a balance sheet total higher than TRY 25 mn, and March 31, 2020 for smaller companies.
Oct. 25, 2019

State banks shall provide loans for additional employment
Three state-owned banks, Ziraat, Halkbank and Vakıfbank, have decided to allocate long-term working capital loans for companies increasing their number of employees. The amount of the loans varies between TRY 5,000 and 200,000 for each additional job. In order to benefit from the loans, both manufacturing and service companies need to already have minimum ten employees, and must hire at least five new employees within three months.
Nov. 1, 2019

Financial restructuring programme started
The Banks Association of Turkey has announced that “financial restructuring” has been started for companies which face temporary difficulties in their debt repayments to the banks and financial institutions. 43 finance institutions have signed a framework agreement to this effect. Both large- and small-scale companies will benefit from the programme.
Oct. 15 – Nov. 8, 2019

U.S. House of Representatives approves sanctions against Turkey
New legislation, approved by an overwhelming majority of representatives, includes sanctions against Turkish officials and institutions involved in the military operation in Northern Syria. Besides, it prohibits the transfer of weapons to Turkey which could be used in this conflict. In addition to that, the House of Representatives has adopted a resolution recognising the killings of Armenians by the Ottoman Empire in the early 20th century as “genocide”. The Turkish Ministry of Foreign Affairs has condemned both decisions, which are legally non-binding.
Oct. 30, 2019

Erdoğan takes trip to Washington
Turkish President Recep Tayyip Erdoğan has visited the U.S. capital to meet with President Donald Trump. The main topics discussed during their meeting included policies towards Syria, co-operation against terrorist organizations, the recent resolutions of the House of Representatives, and Turkey’s purchase of Russian S-400 missile systems. President Trump stated that they would like to increase the trade volume between two countries to USD 100 bn, from the current level of USD 20 bn.
Nov. 14, 2019

Inflation continues to decelerate
According to the Turkish Statistical Institute, consumer prices in Turkey increased by 2.00% in October 2019 in comparison to the previous month. The CPI went up by 8.55% over the same month of the previous year (YOY). The highest monthly increase was registered in clothing & footwear (11.70%), ahead of housing (3.55%). The only monthly decrease took place in recreation & culture (-0.59%). The biggest annual increase by far was in alcoholic beverages & tobacco (43.60%). The domestic producer price index (D-PPI) increased by 0.17% monthly, and by 1.70% YOY.
Nov. 4, 2019

Turkish Central Bank reduces interest rate further
The Central Bank of the Republic of Turkey has reduced its policy rate (one-week repo auction rate) from 16.50% to 14.00%. According to the bank, the moderate recovery of the economic activity continues. On the other hand, the weakening global economic outlook tempers external demand and investment demand has remained weak. The bank expects the disinflation trend as well as the improvement in financial conditions to continue.
Oct. 24, 2019

Fitch revises Turkey’s outlook upwards
Fitch Ratings has kept Turkey’s Long-Term Foreign Currency Issuer Default Rating at non-investment grade BB-, whereas the country’s outlook was revised as stable. Fitch stated that Turkey’s economy has progressed in terms of balancing, and downward risks have subsided. The agency has also upgraded the outlook of 20 Turkish banks as stable in view of the declining risks regarding the country’s ability to support the banks and the decreasing possibility of worsening in external finance conditions.
Nov. 4 – 13, 2019 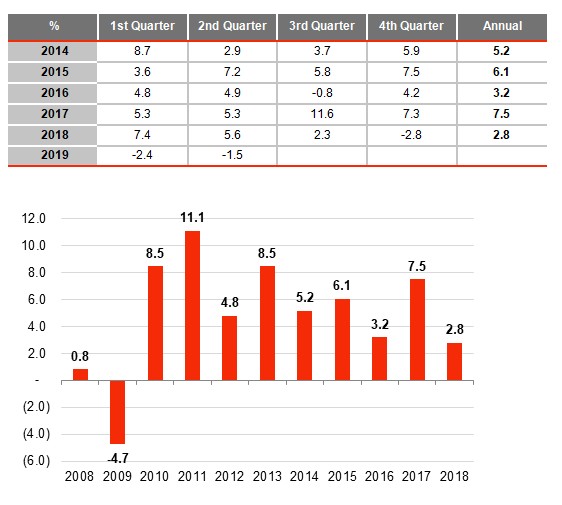 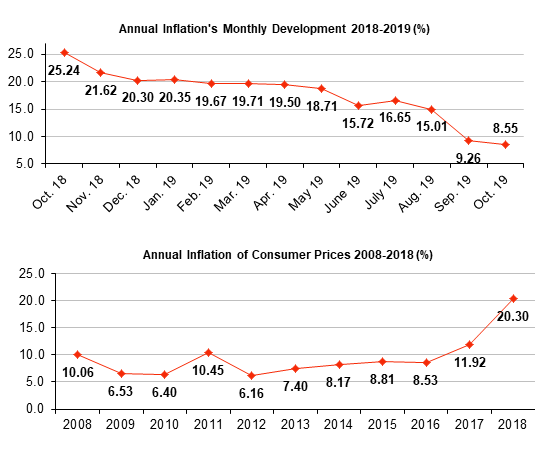