Renault renews its partnership with OYAK
Renault has extended its 50-year-old partnership with Turkish OYAK Group for another 27 years. According to Nicolas Maure, Groupe Renault Senior Vice President, Chairman of Eurasian Region, Renault has been closely following the recent financial situation in Turkey, and since they believe in the dynamism of Turkish economy and the automotive market, they have signed a new partnership agreement, and the company will continue to develop new projects in Turkey. He added that the Bursa plant is one of the most successful plants of Renault Group in terms of quality and performance. The plant with its more than 7,000 employees produces passenger cars and engines.
Sep. 6, 2018

Atlassian acquires Turkish OpsGenie
The Australian software giant Atlassian has acquired Turkish OpsGenie, which had been established only six years ago in Ankara as a start-up enterprise, for USD 295 mn. Two thirds of the customers of OpsGenie, an incident management platform, are located in the USA, where the company had already been active with its own offices. Berkay Mollamustafaoğlu, Founding Partner of OpsGenie, noted that they have been working together with Atlassian for a long period as business partners, and have already completed the integration with most of its products.
Sep. 6, 2018

Hyundai announces new model investment in the shadow of market contraction
The Turkish passenger car market has contracted by 18.5% in the first eight months of 2018 due to the increase in exchange rates and interest rates. Even though a presidential decree to restructure and decrease the excise duty rates on passenger cars has been issued on Sep. 23, market experts claim that the effect would be limited, as the main problem is the unavailability of bank credits and the increasing finance costs. TOFAŞ, the second largest motor vehicle manufacturer in Turkey by capacity, announced to stop its production for 9 days in October. On the other hand, Hyundai declared that it will still adhere to its commitment to commission the production of a new SUV model in the first quarter of 2021. In addition to that, the company announced its plan for the production of a sedan model by the end of 2021. Ickkyun Oh, Hyundai Assan’s President and CEO, stated that they have revised the production plan from 230,000 units down to 210,000 units for 2018, and that the loss in the domestic market would be compensated by tapping new export markets.
Sep. 9 – 28, 2018

1,345 companies found eligible for machinery incentive
The Ministry of Industry and Technology shall support the purchase of local machinery and equipment by 1,345 small and medium sized enterprises which have been found eligible. Accordingly, up to TRY 300,000 per enterprise of the finance costs for the purchasing of domestically manufactured machinery and equipment of TRY 1 mn and above shall be covered by the state. The incentive is expected to create a TRY 1.4 bn market for the Turkish machinery industry.
Sep. 18, 2018

Amazon.com.tr goes online
The Turkish web site of the e-commerce giant Amazon has been activated. As Sam Nicols, Country Manager Turkey, said, they feel excited to present millions of products by more than one thousand local sellers, adding that they shall develop their activities in Turkey in the following months by broadening the product portfolio and increasing the delivery options.
Sep. 20, 2018

Swiss Zehnder commissions its new plant in Turkey
Zehnder, a leading Swiss manufacturer of indoor climate solutions, has commissioned its new plant in the city of Manisa, following an investment of EUR 20 mn. With 220 employees, the plant shall manufacture bathroom radiators, at a capacity of 750,000 units per year. 60% of the production in the new plant is planned to be exported. According to René Grieder, CFO of Zehnder Group, they know that they can rely on both experienced managers and dedicated employees in Turkey, and the new factory shall allow them to not only strengthen the local production site, but also sharpen their competitive edge on an international scale. The company has been active in Turkey since 2006 through a partnership with the local producer Sanpa. In 2012, the company enhanced its presence by acquiring the shares of the local partner.
Sep. 21 – 27, 2018

GSK plans to make a GBP 25 mn investment in Turkey
Selim Giray, the VP and General Manager of GlaxoSmithKline (GSK) Turkey, the subsidiary of the British pharmaceutical company, has announced a GBP 25 mn investment to manufacture the nebule technology, which is used for the treatment of respiratory diseases. The production capacity is planned as 8.5 million nebule boxes, corresponding to 60% of the domestic demand. The production is to begin in 2021. GSK has been active in Turkey for 60 years. The company shall cooperate with the Turkish pharmaceutical manufacturer Abdi İbrahim for the new investment.
Sep. 25, 2018

Turkish DIY chain Tekzen to supply Qatari retailer Al Meera Holding
Tekzen and Al Meera Holding have reached a strategic agreement, under which the Qatari food retailer shall procure USD 100 mn of Turkish manufactured goods through Tekzen in 2019. Salah Al-Hammadi, Deputy CEO of Al Meera Holding, reported that the sales of Turkish-manufactured goods in Qatar have increased by 80% following the embargo. He added that Al Meera is Qatar’s largest hypermarket chain, and that the agreement with Tekzen has been signed to enhance their presence in non-food retail.
Sep. 28, 2018

President Erdoğan visits Germany
Following the invitation of German President Frank-Walter Steinmeier, Turkish President Recep Tayyip Erdoğan has visited Germany for three days. In the press conference following their meeting in Berlin, German Chancellor Angela Merkel praised Turkey for its performance regarding the migration issue, while pointing that her government needs more concrete evidence for the prosecution of the Fethullah Terror Organisation (FETÖ). Erdoğan remarked that Turkey is planning to complete the remaining six criteria regarding the visa liberalisation, which he said would benefit both Turkey and the EU, at the shortest term possible. On the last day of his trip, Erdoğan travelled to Cologne to inaugurate a new mosque of DİTİB, the Turkish-Islamic Union for Religious Affairs sponsored by the Turkish state.
Oct. 1, 2018

Turkey releases US pastor Brunson
A Turkish court has ordered the release of Andrew Brunson, an American evangelical pastor who has been detained and later put under house arrest in Turkey for two years pending trial on charges such as espionage. U.S. President Donald Trump welcomed Brunson following his return to the USA, thanking President Erdoğan for facilitating Brunson’s departure, and expressing confidence that now they have a chance of becoming much closer to Turkey. Brunson’s detention had caused major tensions between the two countries, including the imposition of economic sanctions, and significantly contributed to the drop of the Turkish lira against the US dollar.
Oct. 13, 2018

Inflation continues to accelerate
In September 2018, consumer prices in Turkey increased by 6.30% in comparison to the previous month, and by 24.52% over the same month of the previous year (YOY), which is a new record high since 2003. The highest monthly increase was registered in furnishing and household equipment (11.41%), ahead of transportation (9.15%), and miscellaneous goods and services (7.42%). No monthly decrease took place in the main product groups in September. The highest annual increase was in furnishing and household equipment (37.28%). The domestic producer price index (D-PPI) increased by 10.88% monthly, and 46.15% YOY, the highest since 2002.
Oct. 3, 2018 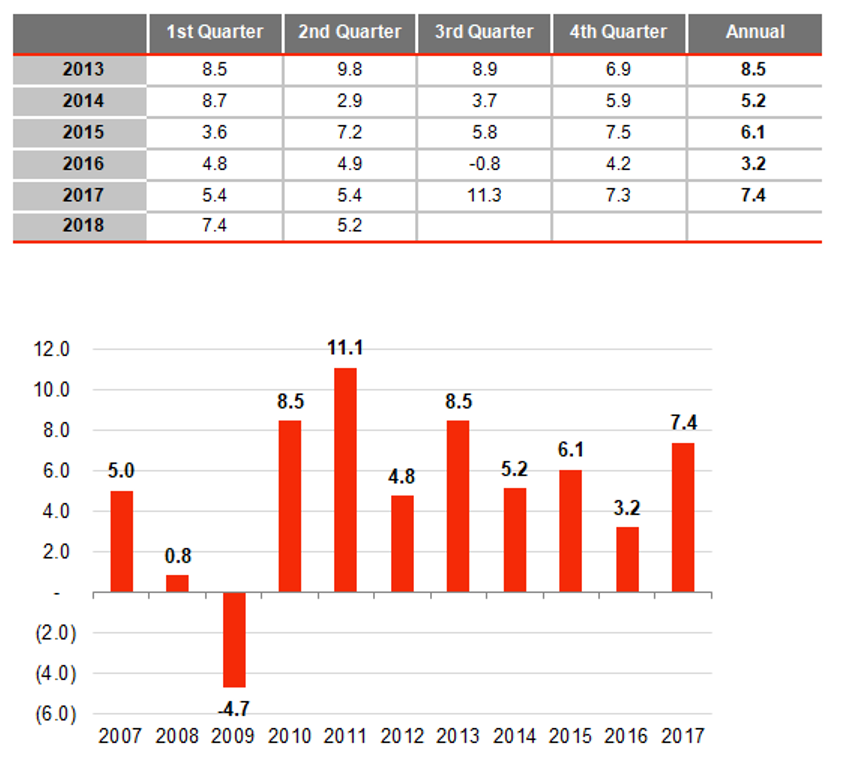 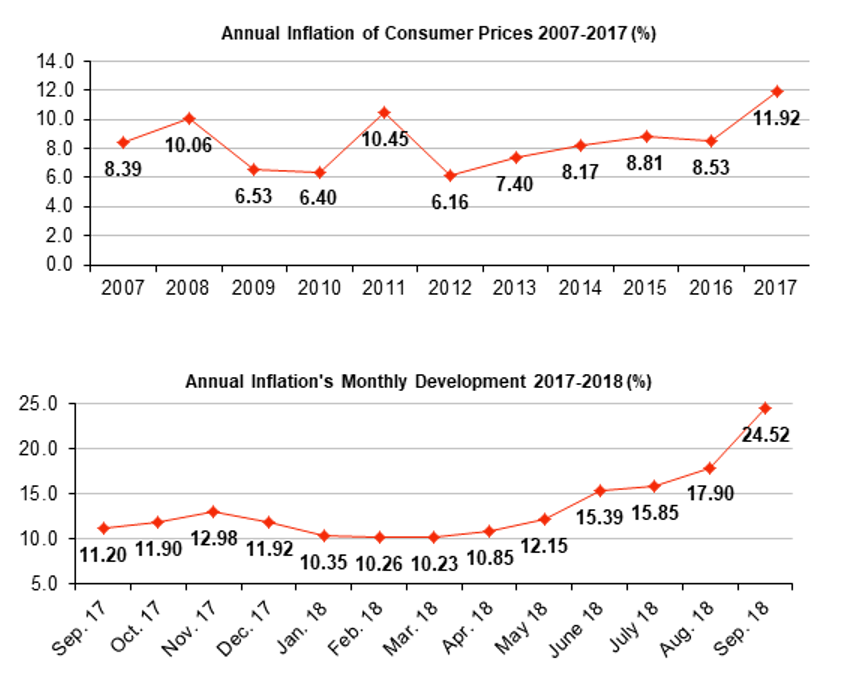