Kale R&D builds Turkey’s first turbojet engine
Turkish Kale Arge (Research and Development) is about to start serial production of the first domestically manufactured turbojet engine. It has completed testing of the engine in cruise missiles, and currently works on increasing its range. This defence industry project has received state funding of USD 25 mn.
Sep. 11, 2019

Opet Fuchs commissions new factory in Aliağa
The joint venture of Turkish Opet Petrolcülük and German Fuchs Petrolub SE, manufacturing lubricants for automotive and industry, has commissioned its new plant in Aliağa near Izmir, following a EUR 24 mn investment. The facility has a production capacity of 60,000 tons per year, twice as much as before.
Sep. 13, 2019

Facebook opens centre in Istanbul for entrepreneurs and SMEs
In co-operation with the Union of Chambers and Commodity Exchanges of Turkey (TOBB) and Habitat Association, Facebook has opened a new centre in Istanbul where Turkish SMEs can access information necessary to grow both in the digital world and in the global markets. Facebook Station plans to open centres in other cities throughout Turkey, and to reach 35,000 people and companies in the first year. All activities in the centre will be free of charge.
Sep. 13, 2019

Metito acquires Info Group
Metito, the Dubai-based multinational provider of intelligent water management solutions, has acquired majority stakes in Turkish chemicals company Info Group. In the words of Fady Juez, Metito Managing Director and board member, Turkey is an attractive market with its increasing population and growth potential. Metito plans to add other services to their portfolio in Turkey, including engineering, construction and alternative energy solutions, and to use Turkey as a base to enter the market in the Turkic states.
Sep. 25, 2019

Turkey breaks ground for high-speed railway link to Bulgarian border
Construction of the Çerkezköy-Kapıkule line, the final section of the high-speed railway project linking the Istanbul metropolitan area with the Europe rail network, has started with an official ceremony held in the city of Edirne. The 200 km long railway line, supported by the EU with a EUR 275 mn grant, is to be completed within four years. In the second phase of the project, it is planned to connect Halkalı with Gebze, a suburb on the Asian side, via the Third Bosphorus Bridge.
Sep. 26, 2019

Volkswagen puts planned investment in Turkey on hold
German automotive giant Volkswagen AG has formed a new company in the city of Manisa with TRY 943.5 mn seed capital. Production in the new plant to be established, creating 4,000 jobs, is scheduled to start in 2022. The plant with a capacity of 300,000 vehicles per year is to produce and export VW Passat and Škoda Superb model passenger cars. The total investment volume has been given as EUR 1.4 bn. This is the first foreign capital investment in the Turkish automotive industry in 22 years. However, due to the Turkey’s military operation in Syria, the investment decision has been put on hold. Stephan Weil, Prime Minister of Lower Saxony, has stated that the investment may be cancelled in case the operation continues.
Oct. 3-16, 2019

Turkey suspends its military operation in Syria
The Turkish army has entered northern Syria  in order to establish a 32 km-deep safe zone east of the Euphrates River. The plan is to clear the area of terrorist groups, especially the IS and Kurdish militia PYD/YPG, to create a “peace corridor” enabling Syrian refugees to return to their home country. Both the EU and the Arab League have condemned Turkey’s course of action. Following a meeting with U.S. government officials in Ankara, Turkey has agreed to suspend the operation for five days until Kurdish forces have withdrawn from the zone. Towards the end of that five-day time limit, Russia and Turkey have reached an agreement,- which allows Kurdish forces an additional 150 hours to leave the zone, and prescribes that the two countries conduct joint patrols on the Syrian border.
Oct. 23, 2019

Inflation decreases to one-digit level
According to the Turkish Statistical Institute, consumer prices in Turkey increased by 0.99% in September 2019 in comparison to the previous month. The CPI went up by 9.26% over the same month of the previous year (YOY). The highest monthly increase was registered in housing (2.15%), ahead of clothing & footwear (2.13%). The highest monthly decreases took place in the product group food & non-alcoholic beverages (-0.60%), followed by recreation & culture (-0.53%). The biggest annual increase by far was in alcoholic beverages & tobacco (43.86%). The domestic producer price index (D-PPI) increased by 0.13% monthly, and increased by 2.45% YOY.
Oct. 3, 2019

New Economy Programme announced
Berat Albayrak, the Minister of Treasury and Finance, has presented the government’s new economy programme covering the next three years. Accordingly, the Turkish economy is expected to grow by 0.5% in 2019, and by 5% between 2020 and 2022. The unemployment rate target for 2022 has been set at 9.8%, and the inflation rate target at 4.9%.
Oct. 1, 2019 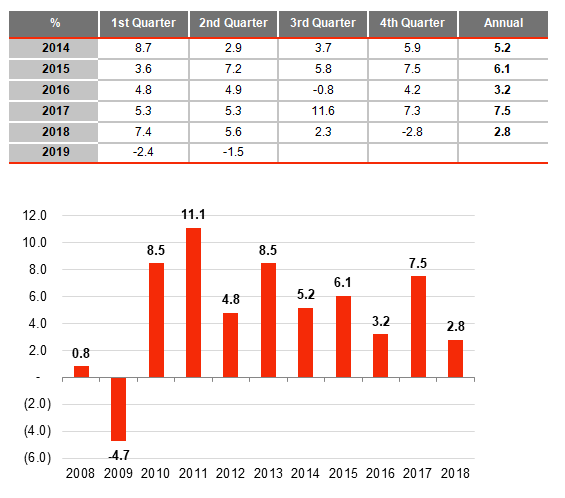 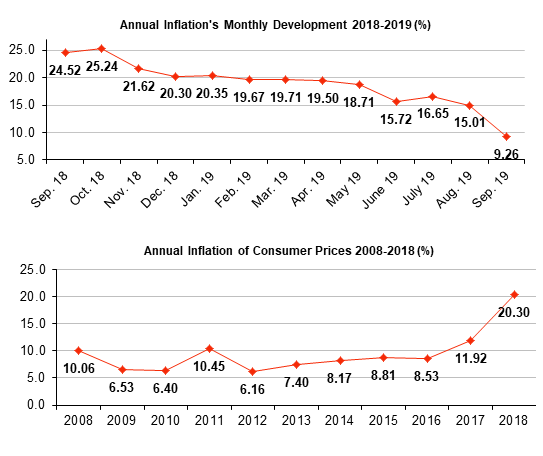