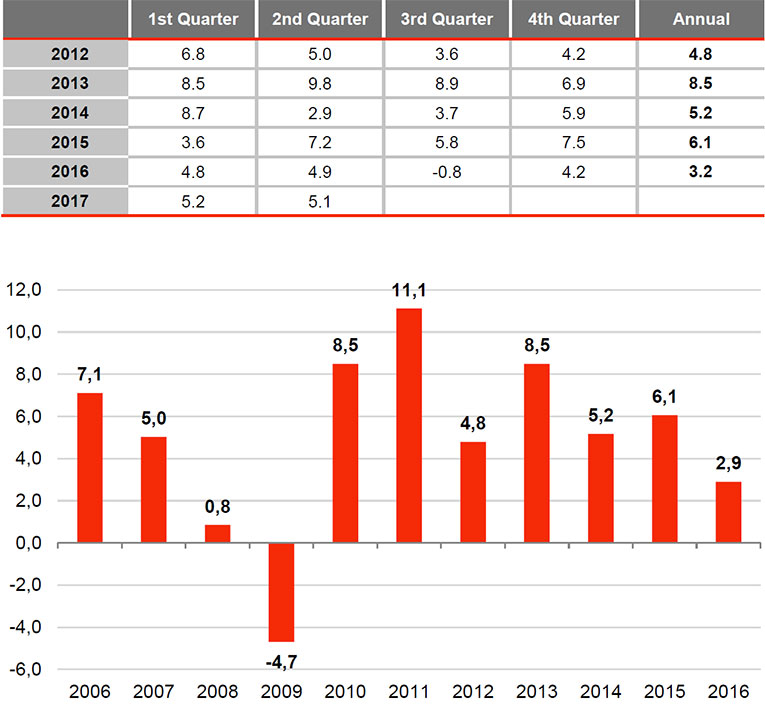 In July 2017, consumer prices in Turkey increased by 0.15% in comparison to the previous month, and by 9.79% over the same month of the previous year (YOY). Accordingly, the increase in CPI-YOY continued its downward trend and fell again to a single-digit level. The highest monthly increases were registered in hotels, cafes and restaurants (1.75%), recreation and culture (1.36%), and transportation (1.13%). Monthly decreases took place in clothing and footwear (-3.51%), and food and non-alcoholic beverages (-0.71%). The highest annual increase was observed in transportation (15.24%). The domestic producer price index (D-PPI), on the other hand, accelerated compared to June, increasing by 0.72%, and 15.45% YOY. Aug. 3, 2017

The Central Bank of the Republic of Turkey has left the overnight lending rate at 9.25%, the one-week repo rate (policy rate) at 8.0%, and the late liquidity window lending rate at 12.25%. The bank reported an ongoing recovery in the economic activity and the domestic demand, stating that the demand from the EU countries continues to support Turkish exports. Due to the high level of inflation, which creates a risk on pricing behaviours, the bank has decided to maintain its tight monetary policy. July 27, 2017

Turkey has issued a note to Germany demanding the extradition of Adil Öksüz, allegedly a leading member of the Fethullah Terror Organisation (FETÖ). German Chancellor Angela Merkel, on the other hand, stated that updating the customs union with Turkey is preliminarily out of question due to the recent developments. As a reaction, Turkish President Recep Tayyip Erdoğan called on Turks eligible to vote in Germany not to support three of the German parties –Christian Democrats, SPD and the Greens– in the upcoming general elections, labelling them “enemies of Turkey”. Sigmar Gabriel, the German Minister of Foreign Affairs, said he believes Turkey will never become a member of the EU as long as Erdoğan remains in power. Two German citizens have been taken into custody in Antalya Airport due to an alleged connection to FETÖ; one of whom was released later on. Berlin rejected Ankara’s request to freeze assets of alleged FETÖ members . Merkel stated that in October the EU will discuss whether to halt or abandon the accession negotiations with Turkey. Gabriel announced that Berlin has suspended arms deliveries to Turkey. Aug. 16-Sep. 12, 2017

Accordingly, 90% of the MIP shares are now owned by foreign companies as Singaporean PSA Group already holds a 50% stake. MIP is one of the most important commercial ports in the Eastern Mediterranean Region with 2.6 mn TEU of container and 9 mn tons of conventional cargo handling capacity. Aug. 1, 2017

The Siemens-Türkerler-Kalyon consortium has won a 1,000 MW wind energy licence tender by submitting the lowest offer with 0.0348 USD/kWh.

According to the project, the consortium will make a USD 1 bn investment to build and operate wind power plants in five different regions of Turkey. 35% of the investment volume will be the value of the plant and equipment to be supplied by Siemens. 3 bn kWh annually will be generated when all power plants are in operation. Aug. 4, 2017

Abraaj Group, headquartered in Dubai, has become a partner of the leading Turkish logistics company Netlog.

Abraaj Group has already invested USD 1 bn for several projects in Turkey, including Acıbadem Hospitals, Acıbadem Insurance, e-trade company Hepsiburada, and Fibabank. Omar Syed, partner of Abraaj Group, stated that they are aiming to make Netlog a large logistics company in the international market, and that they will make further investments in logistics, healthcare, retail, and FinTech industries in Turkey. Aug. 4, 2017

Two new plants of Anadolu Group in the province of Isparta have been inaugurated with the attendance of Turkish President Recep Tayyip Erdoğan.

Ivo Schädler, Sika Regional Manager EMEA, stated that the acquisition provides them with a solid production platform to expand the sealant and adhesive business in Turkey and the MEA region. Sika has been active in Turkey for 25 years, operates two manufacturing facilities in Istanbul and Mersin, and employs more than 200 people. Aug. 23-24, 2017

Pharmaceuticals giant Allergan, headquartered in Ireland, has announced that it will make a TRY 100 mn investment in Turkey to manufacture ophthalmology (eye care) products in a partnership with leading Turkish pharmaceuticals manufacturer Abdi İbrahim.

The production will be carried out in a new facility to be established at the production campus of Abdi İbrahim in Esenyurt, Istanbul. The first products will be accessible in the market in 2019. Marc Princen, Allergan Executive Vice President and President of International Business, stated that Turkey will be the fourth country where Allergan carries out sterile production, and the annual production capacity of the new plant will be 50 million flacons and 9 million bottles. Allergan has been active in the Turkish market since the 1990s and employs almost 200 people. Aug. 25, 2017

Greiner had already acquired 51% shares of Teknik Plastik ve Teknik IML in 2015 as well as all shares of TGM1 Ambalaj, a subsidiary of the same group in June 2017. The customers of Teknik Plastik and Teknik IML include Danone, Nestlé and Ülker. Greiner Packaging CEO Manfred Stanek stated that they believe in the Turkish market and, having positioned the company well, both geographically and organisationally, in the past two years in order to serve the markets in the Middle East and North Africa, they will continue to invest in the site. Aug. 25, 2017