Alibaba acquires Trendyol
Chinese online shopping giant Alibaba has acquired 75% of the Turkish e-commerce company Trendyol for USD 728 mn. Through this biggest internet investment in the country so far, Trendyol has become the first billion-dollar e-commerce company born in Turkey. Michael Evans, President of Alibaba, stated that Turkey is a very exciting market compared to other digital economies in the world and region, and that through this investment, Alibaba shall become the partner of a market-leading brand. Trendyol, established in 2010, boasts 16 million users and more than 90 million visitors per month. Aug. 3, 2018

Bosch benefits from Turkish incentives
Bosch shall benefit from project-based incentives in its TRY 1.2 bn investment for the production of high-pressure gasoline injectors in Bursa. Steven Young, President of Bosch Turkey and Middle East, stated that Bosch has been active in Turkey for more than a century, and that the country is an important production, export and R&D base for Bosch. The investment is to benefit from various incentives, including VAT exemption, customs duty exemption, reduction in corporate tax, income tax withholding support, social security premium support, qualified personnel support, and energy support. The investment is planned to be completed in five years, and expected to create an annual export volume of USD 185 mn, as well as 314 jobs. Aug. 8, 2018

SHV Energy’s subsidiary commissions new plant
EVAS, a subsidiary of İpragaz, which is owned by the Dutch SHV Energy, has commissioned its second LPG plant in Turkey, built with a USD 40 mn investment. EVAS is one of the top five LPG cylinder manufacturers in the world. The company targets a turnover of TRY 350 mn in 2018, 80% of which is to be generated through exports to 72 countries. The new plant shall create 132 jobs. Aug. 9, 2018

ViaCon to manage 50 countries from Turkey
Swedish ViaCon, one of the top three steel culvert and bridge manufacturers in the world, has announced to make its Turkish subsidiary its headquarters of the Middle East and North Africa region. Accordingly, from 2019 onwards, 50 countries shall be managed by the Turkish office, which was established on 2014. ViaCon Turkey has already been active in projects in Tanzania, Ethiopia, and Algeria. ViaCon’s plant in the province of Sakarya, exporting 80% of its production, is the second largest plant of the group, and is scheduled to become the largest one by 2023. Aug. 15, 2018

SunExpress benefits from the boom in Turkish tourism
Jens Bischof, CEO of SunExpress, a partnership of Lufthansa and Turkish Airlines, has stated that the company has increased the capacity in flights from Europe to Turkey by 20% in 2017 and 30-35% in the first half of 2018, in parallel with the big uplift in the Turkish tourism industry. Bischof advised foreign investors not to take their decision by desk research only, but to come to Turkey and see the developed infrastructure and investment opportunities. SunExpress, established in 1989, served 8.8 million passengers in 2017 with its 72 airplanes. Aug. 25-27, 2018

NIBE Industrier acquires Emin Group
Swedish NIBE Industrier AB has acquired 51% of Emin Group, a Turkish manufacturer of coupling systems for fluids. NIBE had been Emin’s largest customer, accounting for more than 50% of its sales. Gerteric Lindquist, CEO of NIBE Industrier, stated that this acquisition further complements their range of components and solutions for the all-important HVAC sector while giving them access to additional interesting countries for low-cost production. Emin Group has operations in Turkey and Serbia, and employs a total of 340 people. Aug. 27, 2018

New communiqué to bring export proceeds to Turkey
The Ministry of Treasury and Finance has introduced a new communiqué, which entered into force on September 4, to be valid for six months. Accordingly, an obligation for Turkish exporters to bring export proceeds into Turkey has been introduced. Exports proceeds have to be brought or transferred to the intermediary bank immediately upon the importer’s payment, and the proceeds must be brought into Turkey within 180 days as of the actual export transaction. At least 80% of the proceeds must be converted into Turkish lira. For export proceeds paid in advance in foreign currency, the export transaction has to be completed in 24 months. In case a passenger brings export proceeds with himself (without bank transfer), this needs to be declared to the customs authority. The proceeds which are not brought on time can be subject to a penalty up to 5% of the good’s current market value. The communiqué sets different time limits for exports by contracting companies, exports on consignment, temporary exports, and exports through credits or leasing. The export transactions made while the communiqué is in force shall be subject to the obligations even after the deadline for bringing export proceeds into Turkey ends. Service exports shall not be subject to this communiqué.
Sep. 5, 2018

Presidents of Turkey, Russia and Iran meet in Tehran
Turkish President Recep Tayyip Erdoğan, Russian President Vladimir Putin, and Iranian President Hassan Rouhani have met in Tehran to discuss the future of Syria, on the eve of an operation by Syrian forces against insurgent-held areas in Idlib province. Erdoğan’s call for a cease-fire to hinder a possible humanitarian tragedy was not accepted by the presidents of Russia and Iran. Putin warned about what he called “provocations” by militants in Idlib, whereas Rouhani demanded the withdrawal of American forces. In a joint statement, the three leaders declared that the Syria crisis cannot be resolved by military means, but only through a negotiated political process.
Sep. 7, 2018

Inflation continues to accelerate
In August 2018, consumer prices in Turkey increased by 2.30% in comparison to the previous month, and by 17.90% over the same month of the previous year (YOY), which is a new record high since 2003. The highest monthly increase was registered in miscellaneous goods and services (5.85%), ahead of furnishing and household equipment (4.56%), and transportation (4.45%). The only monthly decrease took place in clothing and footwear (-1.59%). The highest annual increase was in transportation (27.13%). The domestic producer price index (D-PPI) increased by 32.13% YOY, another record high since 2003, and 6.60% monthly.
Sep. 3, 2018

Turkish economy continued its growth in second quarter
In the second quarter of 2018, Turkey’s GDP grew by 5.2% compared with the same period of the previous year. The main contribution to the growth came from the increase in private consumption expenditures for nondurable goods and services. The quarterly GDP at current prices reached TRY 884.0 bn, and USD 204.3 bn in dollar terms. Agriculture contracted by 1.5%, whereas industry grew by 4.3%, the services sector by 8.0%, and the construction industry by 0.8%.
Sep. 10, 2018

Turkish Central Bank increases the interest rate
The Central Bank of the Republic of Turkey has increased the policy rate (one week repo auction rate) to 24.00%, up from 17.75%, to a record high of the last 14 years. The bank reported that even though the external demand maintains its strength, the slowdown in domestic demand has accelerated. Besides that, price increases due to the movements in exchange rates, and the deterioration in the pricing behaviour create a risk on the inflation outlook. Hence, the bank has decided to implement a strong monetary tightening.
Sep. 13, 2018

Rating agencies have revised Turkey’s ratings downwards
S&P has cut Turkey’s long-term rating down to B+ due to the extreme volatility in the exchange rate, and kept the country’s outlook as stable. Moody’s has also downgraded the long term credit rating to Ba3 while changing the outlook to negative, stating that Turkey’s public institutions continue to weaken, and that the predictability of policy making has decreased. On the other hand, Fitch has not made any change in the rating, though pointing out that the steps taken by the government against the depreciation of the Turkish lira are insufficient. According to Fitch, the current account deficit, external financing needs, the rise in the inflation, and the increase in debts in foreign currency are the main problems to be solved.
Aug. 20, 2018 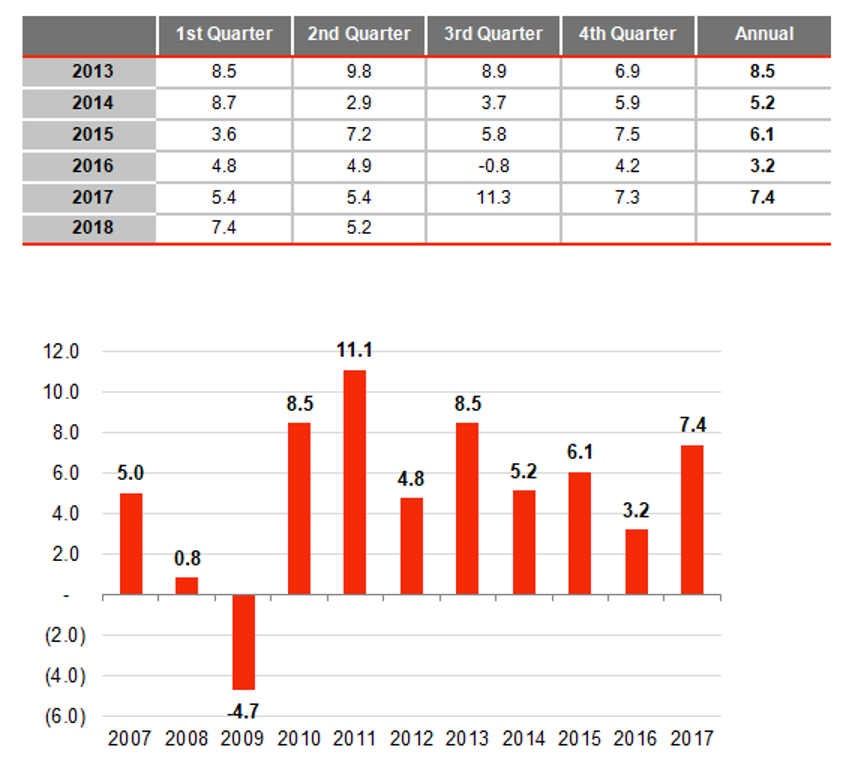 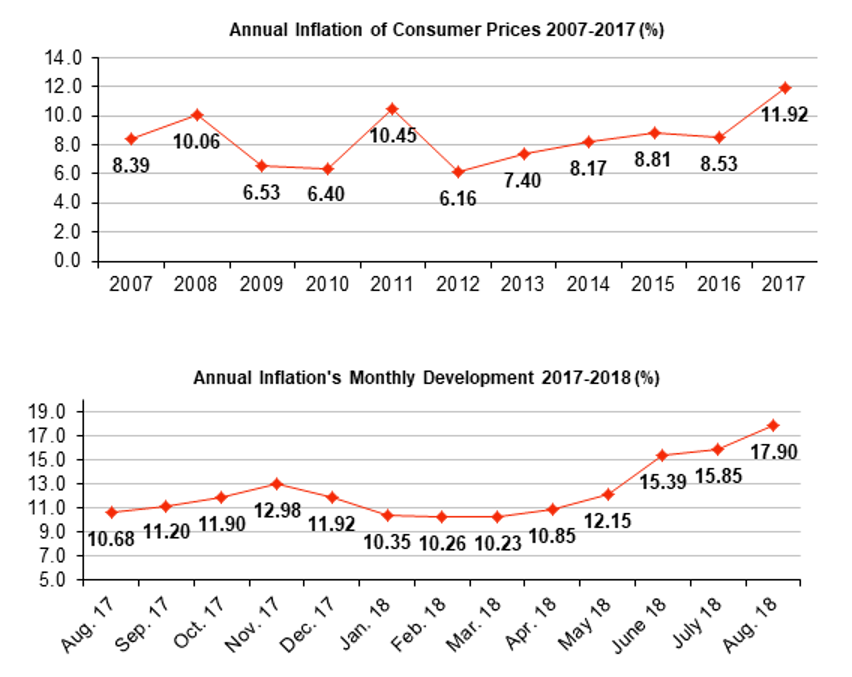