Halla Group establishes regional sales office in Istanbul
South Korean Halla Group, active in the logistics, automotive and construction sectors, has established a regional sales office in Istanbul in order to distribute its Mando brand automotive products to Europe, Russia, Africa, the Middle East, Central Asia, and the UK. The turnover of the new company, Halla Corporation Europe, is expected to reach USD 1 bn in five years, with 90% of its sales to be exports. Halla Group already owns 50% of Maysan Mando in Turkey, a manufacturer of shock absorbers for the automotive industry.
Aug. 3, 2019

Kıvanç Tekstil to cooperate with Indian RIL
The world’s largest integrated polyester fibre producer, Indian Reliance Industries Limited (RIL), and Turkish manufacturer Kıvanç Tekstil have agreed to manufacture environmentally friendly fabric from recycled materials such as plastic bottles, for sale to global textile giants. The production will take place in Kıvanç Tekstil’s plant located in the city of Adana. Besides, Kıvanç Tekstil will act as the exclusive distributor of Recron GreenGold fibres in Turkey.
Aug. 9, 2019

DHL Express has invested EUR 135 mn in Istanbul Airport
According to Claus Lassen, CEO of the Turkey branch of international air cargo company, DHL Express, his company has made investments in the new Istanbul Airport amounting to EUR 135 mn so far. DHL Express owns an area of 42,000 sqm in the airport, with a fully automated operation centre serving the Middle East and other countries from Istanbul. Lassen added that DHL Express’ head office also has high confidence in Turkey, and the company continues to make investments in the country despite ups and downs in the economy.
Aug. 26, 2019

Term for bringing export proceeds to Turkey extended
The Turkish government has extended the term of the obligation for Turkish exporters to bring export proceeds into Turkey, which had been introduced in September 2018. Accordingly, for exports realized prior to March 4, 2020, the proceeds have to be brought or transferred to the intermediary bank immediately upon the importer’s payment, and the proceeds must be brought into Turkey within 180 days of the actual export transaction. At least 80% of the proceeds must be converted into Turkish lira.
Aug. 31, 2019

Hanwha quits Turkey
South Korean conglomerate Hanwha Group has decided to sell its remaining 18 companies in Turkey, which operate mostly in the solar energy industry. The company had already transferred its shares in the partnership with Turkish Kalyon Group this year, which was established to build Turkey’s largest solar energy plant in the province of Konya to produce 1.7 bn kWh electricity each year.
Sep. 2, 2019

Three HDP mayors replaced by “trustees” over PKK charges
The recently elected mayors of three large cities in Eastern and Southeastern Anatolia – Van, Diyarbakır, and Mardin – have been dismissed by the Interior Ministry over allegations of affiliation with or support of a terrorist organization. In the course of the ensuing raids, initially 418 people were taken into custody for alleged involvement with the PKK (Kurdistan Workers’ Party). The governors of the relevant provinces have been appointed as provisional mayors, so-called “trustees”.
Aug. 20, 2019

U.S. withdraws its Patriot offer to Turkey
The Trump administration has officially withdrawn its offer to provide USD 3.5 bn worth of Patriot surface-to-air missiles to Turkey. This decision has been taken as a reaction to Turkey’s purchase of Russian S-400 missile systems.
Aug. 22, 2019

Inflation decelerates
In August 2019, consumer prices in Turkey increased by 0.86% in comparison to the previous month. The CPI went up by 15.01% over the same month of the previous year (YOY). The highest monthly increase by far was registered in alcoholic beverages and tobacco (19.11%), ahead of education (4.26%). The highest monthly decreases took place in transportation (-1.94%), followed by clothing and footwear (-1.10%). The biggest annual increase was in alcoholic beverages and tobacco (41.42%). The domestic producer price index (D-PPI) decreased by 0.59% monthly, and increased by 13.45% YOY.
Sep. 3, 2019

Turkish economy continues to contract
In the second quarter of 2019, Turkey’s GDP contracted by 1.5% compared with the same period of the previous year. The quarterly GDP at current prices reached TRY 1,024.2 bn, but decreased to USD 174.6 bn in dollar terms due to the depreciation of the Turkish lira. Agriculture grew by 3.4%, whereas the industry contracted by 2.7%, the services sector by 0.3%, and the construction industry by as high as 12.7%.
Sep. 2, 2019

Turkish Central Bank reduces interest rate further
The Central Bank of the Republic of Turkey has reduced its policy rate (one-week repo auction rate) from 19.75% to 16.50%. According to the bank, the moderate recovery in the economic activity continues, exports contribute to economic growth, the contribution of private consumption gradually increased, and the tourism revenues are supporting the economic activity. On the other hand, investment demand has remained weak. The bank expects the disinflation trend as well as the improvement in financial conditions and the current account balance to continue.
Sep. 12, 2019 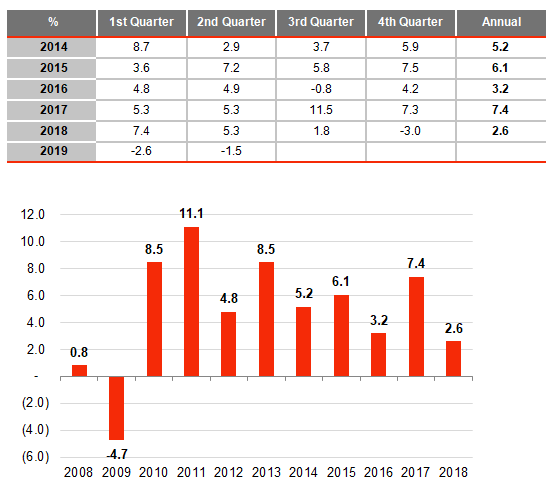 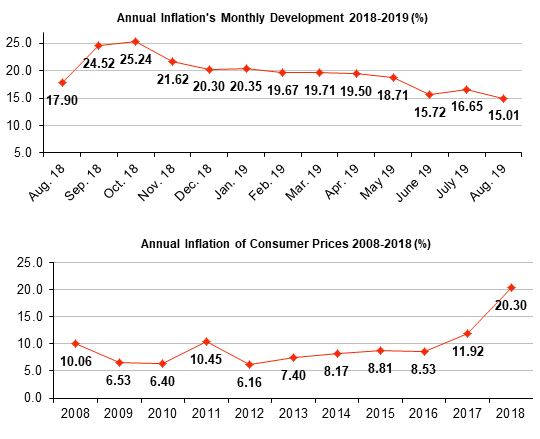