MOROCCO – Azelio Inaugurates Renewable Energy Storage Project
Swedish company Azelio officially launched its renewable energy storage project at the Noor Ouarzazate solar complex on March 5. The company announced that a verification of the storage will be initiated during the first quarter of 2020, with commercial installations planned for later in the year, followed by volume production in 2021. The solar energy storage system uses recycled aluminum as a storage medium and is scalable from 100 kW to 100 MW.  The Noor Ouarzazate solar complex is a 580MW power plant in eastern Morocco. It is the largest concentrated solar power plant in the world.
March 5, 2020

MOROCCO – Renault and PSA Group Suspend Operations
Renault announced on March 17 the suspension of its industrial activities until further notice. The suspension affects Renault’s two production plants in Tangier and Casablanca, which jointly employ 11,000 people.  PSA Group followed suit, announcing its factory closure from March 19 onwards due to restrictions put in place by the government to slow the spread of Coronavirus. The PSA Group factory employs over 1,600 people. Morocco’s broader automobile industry, which employs over 180,000 people, has been severely affected by Coronavirus restrictions. While some companies produce parts for export, many supply Renault and PSA Group.
March 19, 2020

MOROCCO – Alapala Completes Construction of its Third Flour Mill in Morocco
The Turkish grain milling and handling company Alapala has completed its third flour mill in Morocco. The new mill is located in the El Jadida region 100km south of Casablanca and has a capacity of 300 tons per day, processing local semi-hard wheat and bakery flour mainly for domestic consumption. The mill is equipped with Similago II roller mills, Quadro Plansifters with larger sieve boxes, and control sifters.
March 19, 2020

MOROCCO –  Coronavirus Stalls Predator Oil & Gas Drilling Project
Predator Oil & Gas has halted its drilling operations for an onshore exploration well in the Guercif region of Morocco. The British company secured the environmental approval for the project in early March. Following the travel restrictions put in place due to Coronavirus, the company announced that while desktop planning for the project would continue, no commercial contracts would be signed until normal business operations resume. The company would however remain “drill-ready to move to execute the drilling programme at the appropriate time following lifting of Coronavirus restrictions.”
March 31, 2020

TUNISIA – Tunisian-Japanese Seminar to Promote Business Relations
The Agency for the Promotion of Foreign Investments (Fipa Tunisie) organized a seminar on March 02 in partnership with the Japan Trade External Organisation (JETRO) and the Japanese Embassy. A delegation of twenty Japanese companies operating in the digital, renewable energy, health and food industry sectors took part in the seminar. It included a presentation by Tunisian company Eleonetech operating in mechatronics and embedded systems, as well as a testimony by Sumitomo Electric Bordnetze, a subsidiary of Sumitomo that operates in the automotive components sector in Tunisia. As well as providing insight into the Tunisian business environment, the attendees also discussed projects in Tunisia supported by the Japan International Cooperation Agency (JICA).
March 02, 2020

TUNISIA – Business Support for Companies During the Pandemic
The Agency for the Promotion of Foreign Investments (Fipa Tunisie) has put in place a number of measures to support foreign businesses operating in Tunisia during the pandemic. Fipa has set up an online platform listing key contact numbers as well as a hotline available seven days a week. Also, it notes the postponement to the end of May of corporate tax returns (previous deadline March 25), except for companies subject to the wealth tax at the rate of 35%. It has also suspended all tax audit operations and appeal deadlines until the end of May 2020.
March 30, 2020

ALGERIA – Eni and Sonatrach Complete Gas Pipeline Project in Berkine Basin
The Italian multinational gas and oil company Eni, in partnership with Algeria’s state run company Sonatarch, has successfully completed the construction of a gas pipeline connecting Bir Rebaa Nord and Menzel Ledjmet Est fields in the Berkine Basin, in the south-eastern part of Algeria. The pipeline is 185 km long, with a transport capacity of 7 million standard cubic meters of gas per day. The project will allow for the export of gas produced in the area, and the development of gas fields in the Berkine North area. Once fully operational, the gas fields will produce a total of 6.5 million cubic meters per day and 10,000 barrels of associated liquids, which will lead to an overall production of 65,000 barrels of oil equivalent per day.
March 02, 2020

ALGERIA – New 2020 Finance Law to Remove Foreign Barriers to Investment
Ten years ago, Algeria introduced the “51/49 law,” which requires 51% of any foreign investment in Algeria to be held by Algerian individuals or companies. A new 2020 finance law is currently being examined by the Algerian Ministerial Council, under which the 51% requirement will no longer apply to foreign investments in “non-strategic sectors.” The law will provide a new dynamic and a new vision for investment, the Prime Minister announced to Algerian media. The 51/49 law will however continue to apply to “strategic sectors,” which although not yet officially defined, will likely include partly state-owned projects, and energy, infrastructure, banking, insurance, and natural resource projects.
March 15, 2020

ALGERIA – Sonatrach Cuts Budget by 50%, Postpones Non-urgent Projects
Sonatrach has announced its plan to cut its spending in 2020 by 50%, following the impact of Coronavirus on the market. “We intend to reduce the costs of investments and recruitments this year because they do not affect the level of production. We aim to postpone some projects and decrease employment costs to USD 7 bn, i.e. 50% Sonatrach’s budget for this year,” CEO Toufik Hakkar told Algerian press. He added that Sonatrach was still working with foreign companies including Chevron, that are interested in investing in Algerian projects, a process facilitated by a new hydrocarbons law that came into effect in January.
March 29, 2020

MOROCCO – Morocco Formalizes Controversial Maritime Laws Prompting Spanish Media Outrage
Morocco formalized laws 37-17 and 38-17 by publishing them in the Official Bulletin on March 30. Both laws are amendments to existing laws pertaining to the limits of Morocco’s Exclusive Economic Zone (EEZ). Law 38-17 delimits Morocco’s EEZ as extending 200 nautical miles from the coast of the Western Sahara, and outlines the limits of the continental shelf at 350 nautical miles from the coast, in sensitive areas around the Spanish-owned Canary Islands. Spanish media has lashed out about the maritime border legislation, with La Tribuna’s April 1 headline reading “Morocco takes advantage of coronavirus chaos to extend its maritime borders.” Spain and Morocco are expected to enter discussions on the matter shortly.
April 1, 2020

TUNISIA – Police Officer Killed in Terrorist Attack near US Embassy
Two suicide bombers blew themselves up in front of a police patrol near the United States Embassy in Tunis on March 6, killing one police officer and injuring four more as well as a civilian. No group has claimed the attack, although according to Tunisian authorities the attackers had been convicted previously of joining a terrorist organization. This is the second attack targeting police in the Tunisian capital in the past few months. In July last year, a police patrol car was attacked on a central thoroughfare in Tunis, leaving a police officer dead. A terrorist also blew himself up near a police station a few kilometers away at the same time, wounding four policemen.
March 6, 2020

ALGERIA – Courts Convict Journalist for Coverage of Protests
The Algerian court has convicted Khaled Drareni, a correspondent for global press freedom group Reporters Without Borders (RSF) and co-founder of the news website Casbah Tribune, on charges of incitement and committing an “attack on national unity,” sentencing him to an unspecified prison term. The charges stemmed from Drareni’s coverage on social media of the ongoing anti-government protests in Algeria. He was arrested while covering pro-democracy demonstrations on March 7.  “Drareni’s unjustified prosecution is the latest example of Algerian authorities’ intolerance for dissent,” said Eric Goldstein, acting Middle East and North Africa director at Human Rights Watch.
March 25, 2020

MOROCCO – EU Lends Morocco USD 490 mn to Fight Against Coronavirus
The European Union (EU) has allocated USD 480 mn for its Moroccan assistance budget to support the country in its fight against the pandemic. The EU will allocate USD 160 mn immediately to Morocco’s special fund against Coronavirus, while the remaining funds will be mobilized at a later date. In mid-March, in response to the pandemic, King Mohammed VI ordered the creation of a special fund for the fight against the pandemic, with a budget of USD 1 bn. The fund now contains close to USD 3 bn thanks to donations from individuals, businesses and private and public institutions.
March 27, 2020

MOROCCO – Central Bank Adopts Measures to Support the Economy During the Pandemic
Bank Al-Maghrib announced on March 29 a number of new measures to support the country’s economy in response to the repercussions of the Coronavirus pandemic. The Central Bank will triple commercial banks’ refinancing capacity, offering financial instruments to banks in Moroccan dirhams and in foreign currency, and accepting a wide range of securities from commercial banks in exchange for the refinancing. It will also extend the duration of loans. Bank Al-Maghrib is also reinforcing its program for micro, small, and medium enterprises by extending refinancing periods.  In mid-March, Bank Al-Maghrib estimated that Morocco’s economic growth would stagnate at 2.3% in 2020, citing the pandemic as the primary reason.
March 29, 2020

ALGERIA – Central Bank Lowers Policy Rate and Reserve Requirement Rates
In light of the Coronavirus pandemic, the Bank of Algeria’s Monetary Policy Committee has decided to lower its policy rate by 25 basis points to 3.25%, and the reserve requirement rates from 10% to 8%.  These changes are designed “to free up for the banking system, ensure additional liquidity reserves, and ensure banks and financial institutions have access to financing opportunities at a reasonable price,” Bank of Algeria’s governor Aimene Benabderrahmane announced. Lowering financing costs encourages borrowing and investing in order to stimulate economic growth.
March 15, 2020

ALGERIA – Algeria Announces Measures to Save Foreign Currency Reserves
Algerian President Abdelmadjid Tebboune has announced a number of measures to tackle the financial strain facing the country following the international drop in oil prices. In addition to reducing Sonatrach’s budget by 50% this year, Algeria will cut its public spending by 30% and will delay the delivery of state-owned projects. Algeria will also decrease imports from USD 41 bn to USD 31 bn, and will stop working with “international consulting companies,” saving up to USD 7 bn per year. The measures are designed to “save foreign currency reserves,” which have dropped from USD 179 bn in 2014 to USD 62 bn in 2019.
March 22, 2020 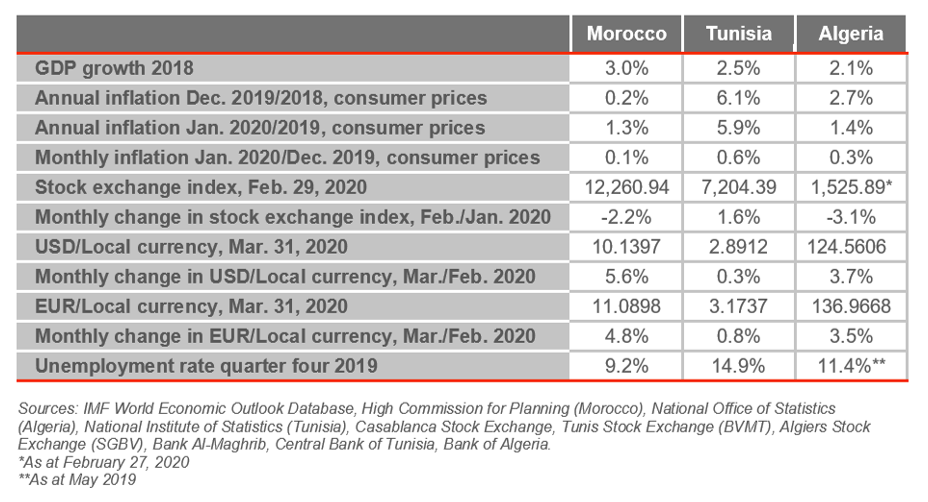