MOROCCO – Morocco’s Managem signs USD 118 mn contract with BMW for cobalt supply
German automobile company BMW has announced the signing of a USD 118 mn cobalt supply contract with the Moroccan mining company Managem Group. Under this contract, the BMW group will cover approximately a fifth of its cobalt needs for the manufacture of fifth generation battery cells, a statement from BMW said. The contract has a five-year term (2020–2025). Morocco is the world’s 12th biggest exporter of cobalt.
July 9, 2020

MOROCCO – Chinese-owned Omega Textile Maroc to open a new textile unit in Casablanca
Chinese-owned company Omega Textile Maroc and the Moroccan Minister of Industry and Trade have signed an agreement for a new high-tech textile industrial unit in Casablanca. The USD 8.5 mn unit will manufacture hosiery, socks, and lingerie for both the local market and export. The plant will have an estimated annual turnover of USD 8 mn and will create up to 650 jobs. Omega Textile Maroc currently operates from a plant in Settat near Casablanca, employing 170 people, producing goods for the Moroccan market.
July 16, 2020

MOROCCO – Morocco increases import tax on Turkish textile products
On July 27, Morocco’s import tax on Turkish textile products increased from 27% to 36%, as part of the amended 2020 Finance Bill approved by the Moroccan Parliament in early July. The increase in the import tax aims to promote local production. Morocco and Turkey have been negotiating changes to the 2004 Free Trade Agreement between the two countries since January. Moroccan Ministry of Industry figures show that Morocco loses USD 2 bn annually in its trade deal with Turkey. The Turkish companies directly affected by the new import tax rate include clothing brands LC Waikiki, Koton, and DeFacto, as well as the retail company Bim.
July 27, 2020

TUNISIA – Qair and STEG sign a cooperation agreement for the first floating solar plant
The French independent power producer Qair (formerly Quadran International) and the state-owned Tunisian Electricity and Gas Company (STEG) have signed a cooperation agreement for the construction of Tunisia’s first floating solar photovoltaic power plant. The plant will have a capacity of 200 kWp and will be built in the Berges du Lac district of Tunis. Construction is due to start by the end of 2020 and the plant is expected to be commissioned by the end of 2021. The project will receive financing of an as yet unspecified amount from the Private Sector Study and Aid Fund of the French Ministry of Economy.
July 14, 2020

ALGERIA – Volkswagen actively seeks new Algerian partner to replace Sovac
The German group Volkswagen has announced that it will end its distribution contracts with its Algerian partner Sovac from March 2021, and has confirmed it is seeking a new Algerian partner. “The VW Group, through its historic presence with Algerians, is determined to continue its activity in Algeria and the search for a new partner in your country is still ongoing. The process is therefore underway and no decision has yet been taken,” announced VW. The Sovac assembly plant for Volkswagen vehicles in Relizane has been stationary for several months, due to a blockage of knock-down kits at the ports. A receiver has been appointed to manage the Sovac group.
July 17, 2020

ALGERIA – Cepsa signs MoU with Sonatrach for exploration and production in Algeria
The Spanish company Cepsa has signed a memorandum of understanding with the state-owned oil company Sonatrach for possible joint investments in exploration and production in Algeria. “This memorandum confirms Sonatrach’s will to consolidate its partnership policy,” Sonatrach said in a statement. Sonatrach has signed similar agreements this year with Exxon Mobil Corp and Russia’s Lukoil in an aim of increasing oil and gas exports.
July 29, 2020

MOROCCO – Moroccan and French agencies partner to develop national ports
Morocco’s National Ports Agency (ANP) has signed a loan agreement of USD 113 mn and a technical assistance grant of USD 897,000 with the French Development Agency (AFD). The contract seeks to improve the competitiveness of Moroccan ports by increasing their “resilience to climate change effects and strengthen their urban integration,” said the institutions in a joint press release. The investments are part of the ANP’s 2030 National Port Strategy, which aims to consolidate infrastructure in the ports of Casablanca, Essaouira, Al Hoceima, Sidi Ifni, Agadir, Laayoune, Cala Iris, Ras Kebdana, and Tan Tan.
July 4, 2020

MOROCCO – Germany lends USD 825 mn to support Morocco’s development
Morocco and Germany signed three agreements on July 23 worth a combined total of USD 825 mn to support economic development. The agreements target “priority sectors for Morocco’s development,” including the development of renewable energy and energy efficiency initiatives, sustainable economic development, and water resource management. The agreements follow the July 7 signing of a MoU between the Moroccan Investment and Export Development Agency (AMDIE) and the Ghorfa Arab-German Chamber of Commerce and Industry, which aims to establish a framework to promote Moroccan business opportunities to German investors. A business guide of Morocco will soon be published in German and distributed to German economic operators.
July 23, 2020

MOROCCO – Morocco bans travel to and from eight major cities following a spike in COVID cases
Moroccan authorities have announced a travel ban to and from eight major cities effective from July 26 onwards, following a spike in COVID-19 cases. “[…] It has been decided that all movement from and to the cities of Tangier, Tetouan, Fez, Meknes, Casablanca, Berrechid, Settat and Marrakech will be prevented,” announced the Minister for Health. Businesses within each of the cities remain open, except in Tangier, where reconfinement measures were introduced on July 13, meaning business have closed and permission from a local authority is needed to move around the city. Morocco’s international borders remain closed, although since July 15, Moroccans abroad have been allowed to return to the country.
July 26, 2020

TUNISIA – EU and France fund 10 new technology hubs in marginalized areas
The European Union and Expertise France, a public agency supporting international technical cooperation, have provided a USD 1.9 mn grant for the development of 10 technology hubs in marginalized parts of Tunisia. The hubs will support up to 5000 young degree-holders to join the workforce, as well as entrepreneurs in the technology sector. The project is part of the EU4Innovation program that aims to support innovation and entrepreneurship in Tunisia.
July 9, 2020

TUNISIA – Tunisian political crisis deepens after resignation of the Prime Minister
Tunisian Prime Minister Elyes Fakhfakh resigned on July 15 after five months in office. President Kais Saied asked Fakhfakh to resign following pressure in parliament to oust him based on corruption allegations. Saied has appointed the interior Minister Hichem Mechichi as the new prime minister. The Tunisian parliament is however fragmented and the failure to build a coalition could trigger an election. On July 30, the parliament’s speaker Rached Ghannouchi only narrowly survived a confidence vote: 97 members of parliament voted against him, falling short of the 109 votes needed to oust him.
July 30, 2020

ALGERIA – Algeria extends partial lockdown measures
The Algerian Prime Minister has announced that partial confinement measures will be extended for 15 days from July 28. In Algiers, over 376 businesses, markets, and shopping centers were closed on July 26, including the department store Printemps, the shopping center Gaba, and the large indoor market of Ferhat Boussad in the center of Algiers. Roads leading into Algiers have been closed in a bid to control population movements during the Aid al Adha celebrations. The 8pm to 5am curfew will continue in 29 of Algeria’s 48 provinces. Confinement measures were lifted in the other provinces on July 14.
July 26, 2020

ALGERIA – The EU closes its borders with Algeria amid spike in COVID-19 cases
The European Union has removed Algeria from its safe country travel list. This means travelers from Algeria are no longer able to enter the EU unless they are EU citizens, EU residents, family members of citizens or residents, or have an “essential function or need” to enter the EU. The Algerian embassy in Brussels has stated that the decision has little impact given Algeria has already closed its borders to limit the pandemic. Morocco and Tunisia remain on the EU safe list.
July 31, 2020

MOROCCO – King’s Mohammed VI announces USD 12.8 bn stimulus plan
Morocco’s King Mohammed VI has announced a USD 12.8 bn stimulus plan (11% of the country’s GDP) to help recover from the COVID-19 crisis. In an official speech, the King announced the country would mobilize all means available in terms of funding, incentive mechanisms and solidarity measures, in order to support businesses in Morocco. This new plan will support local production and financing activities of large public-private investment projects, placing “Morocco among the most daring countries in terms of post-crisis economic recovery policy”, the King noted. A special fund of USD 3.6 bn was created early on in the pandemic, of which USD 2.6 bn has been spent on the COVID-19 response so far.
July 29, 2020

TUNISIA – AfDB predicts Tunisia’s budget deficit to reach 6% of GDP in 2020
According to the African Development Bank’s (AfDB) “North Africa Economic Outlook 2020-Coping with the COVID-19 Pandemic” report, Tunisia’s budget deficit is expected to reach 6% of GDP in 2020, and 4.5% of GDP in 2021. Tunisia’s debt-to-GDP is expected to peak at 80% in 2020, the report also noted. According to the AfDB, this increase is due to the cost of subsidies as well as a surge of public sector jobs.
July 14, 2020

ALGERIA – Algeria suspends tax and loan obligations for COVID-affected businesses
The Algerian Ministry of Finance has announced the suspension of tax payments in order to ease the impact of COVID-19 on local businesses. Earlier this year, Algeria also suspended the enforcement of penalties on companies for delays in delivering projects. The government has also allowed loan repayments to be delayed. Algeria’s economy has been significantly affected by COVID-19, particularly because of the fall in international oil prices. Oil and gas account for 93% of total export revenue. As a result, the economy contracted by 3.9% in the first quarter of 2020.
July 28, 2020 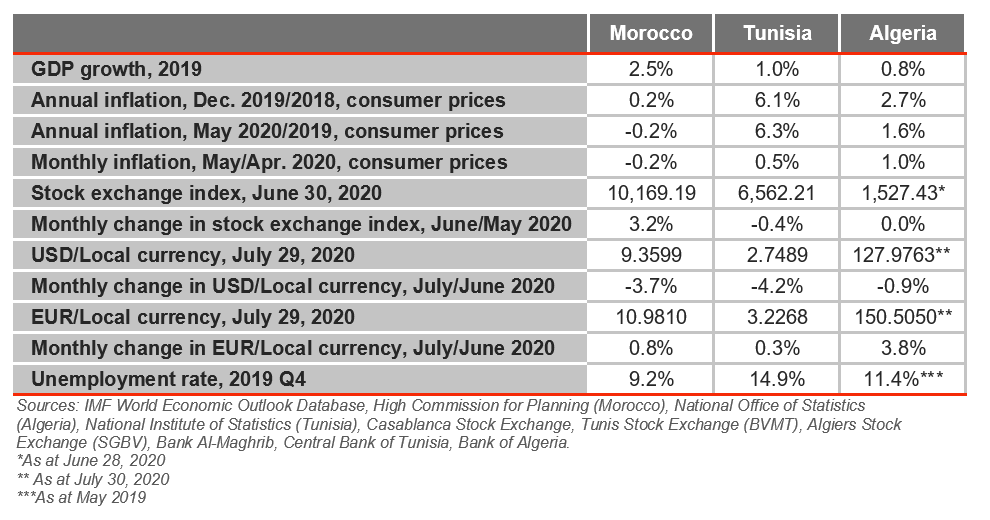