EGYPT – Emirati Oil Company ADNOC to acquire 50% of TotalEnergies Egypt
The Abu Dhabi National Oil Company (ADNOC) has entered into an agreement to acquire a 50% stake in TotalEnergies Egypt. The value of the purchase is approximately USD 186 mn, in addition to an additional amount of up to USD 17.3 mn if certain conditions are met during the acquisition process. The acquisition is expected to be completed during the first quarter of 2023.
July 28, 2022

MOROCCO – Polish dairy company Polmlek becomes a majority shareholder in Morocco’s Safilait
Polish dairy company Polmlek Group has signed an agreement to acquire a 70% stake in Safilait, a subsidiary of Moroccan dairy company Bel Group. The deal concerns a factory and a farm operated by Safilait in the Beni Mellal region, central Morocco. Safilait is known in Morocco for its brand “Jibal.” Its products include milk and various types of yogurts. The acquisition is set to be finalized during the second half of 2022. The value of the deal is yet to be disclosed.
July 14, 2022

TUNISIA – Tunisian government sets a limit for profit margins on basic goods
Tunisia’s Ministry of Trade has decided to set a legal limit for profit margins on several consumer goods in order to support the purchasing power of the Tunisian population. The concerned products include mineral water, soft drinks, vegetal oils, canned goods, and hygiene products. The maximal profit margin allowed on these types of products was set to between 8% and 14%.
July 12, 2022

ALGERIA – Algeria signs a four-billion-dollar oil supply deal with three global companies
Algeria’s national oil and gas company Sonatrach has signed an oil supply deal worth USD 4.0 bn with Eni (Italy), TotalEnergies (France), and Occidental Petroleum (US).  According to the agreement, Sonatrach will supply up to one billion barrels of oil to the three companies, over a period of 25 years.
July 19, 2022

ALGERIA – Algeria launches a new maritime route with Senegal
Algeria has launched a new cargo maritime route with Senegal. The new route runs between the Port of Djen Djen, in northeastern Algeria, and the Port of Dakar, Senegal. Algerian maritime transport company GATMA is operating the new route using a freight ship with a total cargo capacity of over 8,200 tonnes. The ship will make a round trip between Algeria and Senegal every month.
Aug. 1, 2022

EGYPT – Egyptian authorities implement precautionary measures against monkeypox in airports
Egyptian authorities have announced taking new intensive precautionary measures in international airports to limit the spread of monkeypox. The measures include measuring incoming travelers’ temperatures and making them fill out medical examination forms. Any suspected cases will be isolated at the airport and then transferred to a hospital if needed. The decision to implement the new measures came after the World Health Organization declared a state of emergency due to the increase in monkeypox infections worldwide.
July 25, 2022

MOROCCO – King Mohammed VI invites Algeria to resume relations on Throne Day speech
King Mohammed VI of Morocco invited Algeria to resume normal bilateral relations during his 23rd Throne Day speech. “I look forward to cooperating with the Algerian presidency so that Morocco and Algeria may work hand in hand and enjoy normal relations between the two brotherly peoples, who are bound by historical and human ties as well as a common destiny,” the Monarch said. Diplomatic relations between Morocco and Algeria have been officially suspended by Algerian authorities since August 2021.
July 30, 2022

TUNISIA, ALGERIA – Tunisia and Algeria fully reopen their land border for passengers
Tunisian President Kais Saied and his Algerian counterpart Abdelmadjid Tebboune have decided to fully reopen the land border between their countries for passengers and tourists. Prior to the decision, the land border between Tunisia and Algeria was only open for the transportation of goods. Passengers were unable to travel between Algeria and Tunisia by land since March 2020.
July 15, 2022

MOROCCO – Moody’s upgrades its outlook on Morocco to ‘stable’ and affirms its ‘Ba1’ rating
Credit rating agency Moody’s has changed its outlook on Morocco from “negative” to “stable” and affirmed its long-term issuer and senior unsecured ratings at “Ba1.” According to Moody’s, the outlook change reflects the recovery of Morocco’s GDP to pre-pandemic levels and the capacity of the Moroccan government to manage crises. Meanwhile, the affirmation of the “Ba1” rating reflects Morocco’s economic resilience and the build-up of significant foreign exchange reserves covering over six months of imports.
July 1, 2022 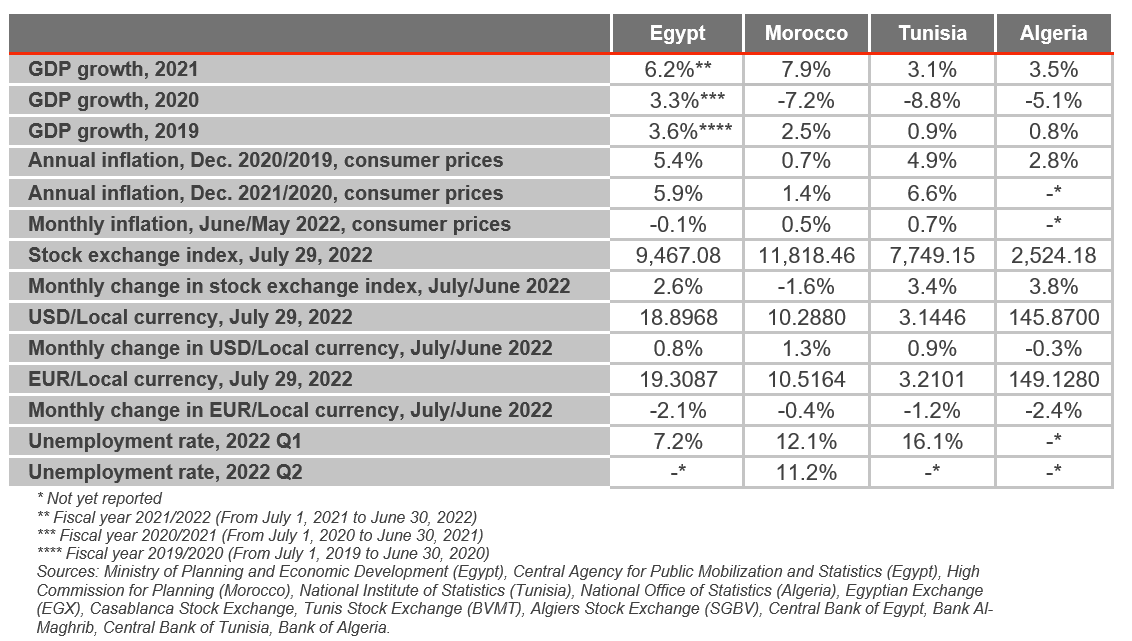