MOROCCO – French company Alstom to deliver at least 66 tramway cars to Casablanca
Casablanca’s public transport company has awarded French manufacturer Alstom with a contract to supply the Moroccan city with 66 new tramway cars. The French company will also have to deliver 22 more trams after Casablanca expands its transit network. The deal between Alstom and Casablanca authorities is worth EUR 130 mn.
Nov. 5, 2020

MOROCCO – China’s CCC Group to develop trading and logistics park in Morocco
Zhejiang China Commodities City Group (CCC Group) has signed a Memorandum of Understanding with Morocco’s Bank of Africa to build a trading and logistics park in Tangier, northern Morocco. The future industrial zone will host more than 20 Chinese companies, in addition to businesses from other countries. It aims to strengthen the position of Tangier as an important trading hub in the Mediterranean.
Nov. 7, 2020

MOROCCO – Morocco launches online platform for customs and taxes
Morocco’s Customs and Indirect Taxes Administration (ADII) has launched an online platform to facilitate access to information and documents about customs and taxes. The service, available on the website www.portnet.ma, allows companies outside Morocco to remotely apply for customs-related documents. The system provides 120 digital services in total, including the declaration of products, the simulation of taxes to be applied on products, and the online payment of customs duties.
Nov. 10, 2020

MOROCCO – New maritime route to link Morocco and Canary Islands
Morocco’s Ministry of Equipment has published a call for expressions of interest for companies wishing to operate a future maritime route between Morocco and the Canary Islands. The route will link Tarfaya, in southern Morocco, to Las Palmas. The route, for both passengers and commercial trade, will be the first direct link between Morocco and the Canary Islands. It will significantly reduce the time required for sea travel between the North African country and the Spanish archipelago.
Nov. 17, 2020

TUNISIA – France maintains daily flight between Paris and Tunis
Air France has decided to maintain a daily flight between the Paris-Charles de Gaulle airport and Tunis despite Tunisia’s exclusion from the European Union’s green list, a list of countries from which people can access Europe without sanitary restrictions.
Nov. 2, 2020

TUNISIA – Tunisia launches website to help companies wishing to export to Africa
The Tunisian Ministry of Trade has launched a website, www.africatradeagreements.tn, aimed to support businesses interested in the African market. The website provides information on all documents and legal texts relating to Tunisian-African trade agreements, as well as ongoing negotiations and upcoming business events. The web portal, developed in collaboration with the German Cooperation Agency (GIZ), seeks to increase the exports of companies located in Tunisia to African markets.
Nov. 10, 2020

TUNISIA – Qatari Fund to finance Sidi Bouzid agricultural project in Tunisia
The Qatar Fund for Development (QFD) is set to finance the Sidi Bouzid agricultural production platform in central Tunisia. The project seeks to improve the productivity of local farmers. The Qatari investment fund will support the agricultural project with USD 15 mn, including USD 5 mn as a grant and USD 10 mn as an equity investment. The QFD has also announced its intention to partially finance the “Aghlabids” medical city project in Kairouan, northeastern Tunisia. The mega-project aims to promote medical tourism in Tunisia and is expected to create 50,000 jobs.
Nov. 16, 2020

TUNISIA – Tunisia to distribute monthly stipends to laid-off tourism workers
The Tunisian government is set to distribute a monthly stipend of TND 200 (EUR 62) to laid-off workers in the tourism industry. The financial aid will remain in place in the fourth quarter of 2020, as well as the first two quarters of 2021. It will benefit workers that were either partially or totally laid off during the COVID-19 crisis.
Nov. 16, 2020

ALGERIA – Algeria and Spain to launch new maritime route for cargo
Algeria’s National Enterprise for Maritime Transportation (ENTMV) has announced the upcoming launch of a regular maritime route between the ports of Oran, in northwestern Algeria, and Alicante, in southeastern Spain. The route will be dedicated to the transportation of freight trucks and vehicles. ENTMV did not yet announce the date when the route will become operational.
Nov. 8, 2020

ALGERIA – Algeria to begin construction of a new major port in 2021
The Algerian Minister of Finance has announced the launch of major infrastructure projects in 2021, including the port of El Hamdania, near the capital Algiers. The port seeks to turn Algeria into a competitive hub for maritime trade. The finance minister also announced the launch of several mining projects across Algeria, notably for phosphates, zinc, and iron. The projects will “create a significant number of job opportunities,” the minister said.
Nov. 26, 2020

MOROCCO – Morocco prepares for a national vaccination campaign against COVID-19
Morocco is set to launch a national vaccination campaign against COVID-19 “in the upcoming weeks,” a statement from the Moroccan Royal Office has announced. The campaign aims to inject at least 80% of the Moroccan population with the Chinese Sinopharm COVID-19 vaccine. Citizens will receive two injections in total. The campaign will prioritize health workers, teachers, security services, and local authorities, as well as people at high risk of developing severe COVID-19 symptoms.
Nov. 9, 2020

TUNISIA – European Union determined to strengthen partnership with Tunisia
The European Union’s Ambassador to Tunisia has expressed the EU’s determination to further strengthen partnership with Tunisia and to support its efforts to meet the economic, social, security, and health challenges caused by COVID-19. The European diplomat made the statement during a meeting with the Tunisian Secretary of State to the Minister of Foreign Affairs. The two officials reviewed the ongoing preparations for future bilateral and multilateral events.
Nov. 9, 2020

TUNISIA – Tunisian-Libyan land borders reopen after eight months of closure
The Ras Jedir crossing point between Tunisia and Libya has reopened for travelers in both directions after a closure of eight months due to the COVID-19 pandemic. Tunisia’s Prime Minister, Hichem Mechichi, attended the reopening ceremony. “Tunisians and Libyans are one people in two countries. Such border closure cannot continue considering the human, historical, and economic relationship between the two countries,” he said. Ras Jedir is one of the main crossing points for passengers and cargo between Tunisia and Libya.
Nov. 14, 2020

TUNISIA – Tunisia and Germany sign agreement to boost investment opportunities
The FIPA Invest in Tunisia Agency and the German Federal Association of Small and Medium Enterprises (BVMW) have signed a Memorandum of Understanding to boost Tunisian-German investment opportunities. The agreement aims to assist investors from both countries through investment missions and business visits. It also seeks to facilitate the sharing of information on bilateral trade.
Nov. 19, 2020

TUNISIA – Tunisian government extends opening hours of restaurants
Tunisia’s Health Ministry has allowed restaurants to stay open until 7 p.m. instead of 4 p.m. The extension of restaurants’ working hours seeks to reduce the economic impact of COVID-19 on this type of business. Coffee shops, on the other hand, still have to close at 4 p.m. The health ministry will update its regulations every week, depending on the evolution of the domestic epidemiological situation.
Nov. 23, 2020

ALGERIA – Portugal and Algeria agree to strengthen economic ties
The Portuguese Minister of Foreign Affairs has expressed his country’s ambition to improve economic ties with Algeria. Portugal’s top diplomat made the statement during a meeting with his Algerian counterpart in Algiers. The Portuguese official announced that several companies from his country are ready to invest in Algeria, noting that 80 Portuguese businesses are already present in the North African country.
Nov. 4, 2020

ALGERIA – Algeria extends closure of some businesses for 15 days
Algerian Prime Minister Abdelaziz Djerad has decided to extend the closure of some businesses for 15 days to curb the spread of COVID-19. The businesses banned from opening their doors include gyms, cinemas, and SPAs, as well as other entertainment venues. Meanwhile, markets and other stores have to close their doors at 3 p.m. The restrictions are nationwide.
Nov. 30, 2020

MOROCCO – IMF and World Bank postpone 2021 annual meetings to 2022
The International Monetary Fund (IMF), the World Bank, and the Moroccan government have postponed the annual meetings of the two financial institutions until 2022. The meetings were set to take place in Marrakech, Morocco, in October 2021. The decision to postpone the events by one year was due to the continuous spread of COVID-19.
Nov. 5, 2020

TUNISIA – Tunisia remains the world’s largest olive oil exporter outside of the EU
Tunisia has remained the world’s leading olive oil-exporting country by volume, outside the European Union, for the 2019-2020 agricultural campaign. During the season, Tunisia exported 365,000 tonnes of olive oil with a total value of TND 2.2 bn (EUR 689.8 mn). The country’s main customers were the European Union, Canada, and the United States. Tunisia came second in the world in terms of olive oil exports, behind Spain which exports three million tonnes annually.
Nov. 12, 2020

TUNISIA – Fitch Ratings revises Tunisia’s outlook from stable to negative
Fitch Ratings has revised Tunisia’s outlook from stable to negative. The credit agency also downgraded Tunisia’s long-term foreign-currency issuer default rating (IDR) to ‘B.’ According to Fitch Ratings, the negative outlook reflects a worsening fiscal liquidity risk in Tunisia due to a deterioration in public finances and the broad macroeconomic environment. The agency has also projected Tunisia’s budget deficit to grow to 10.5% of the GDP in 2020, from 3.3% in 2019.
Nov. 23, 2020 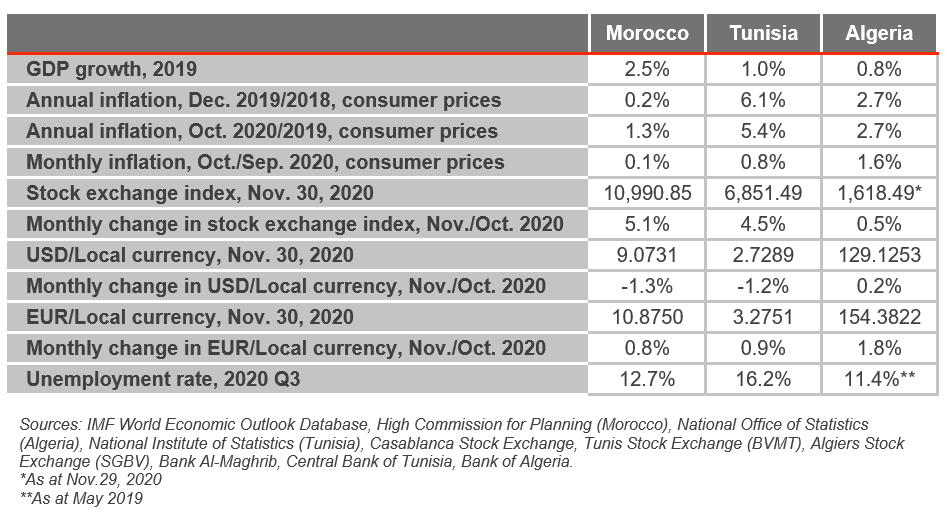