EGYPT – Egyptian company partners with Greek and Emirati counterparts on nanotechnology products
Egypt’s Heliopolis Company for Chemical Industries, known as Factory 81, has signed a partnership with Greece’s NanoPhos and the UAE’s Creazure Building Materials, two companies specialized in nanotechnology. The partnership will allow for tripartite cooperation in the domains of nanotechnology coatings and waterproof construction paints.
Nov. 4, 2021

EGYPT – Abu Dhabi Ports announces plan to invest USD 500 mn in Egypt
Abu Dhabi Ports, an Emirati government-owned holding company, has announced its plan to invest USD 500 mn in Safaga, a coastal city in eastern Egypt, and the 10th of Ramadan City, near the capital Cairo. The company, however, is yet to specify the nature of its future investments in Egypt. Abu Dhabi Ports is one of the main Emirati actors in the sectors of trade, industry, and logistics. Its portfolio includes 11 ports and more than 550 square kilometers of industrial areas.
Nov. 8, 2021

EGYPT – International firm Openner launches a venture capital fund with Egypt’s Benya Group
International venture capital firm, Openner, and Egyptian IT infrastructure company, Benya Group, have signed a memorandum of understanding to launch a USD 50 mn venture capital fund. The fund is set to provide capital investments and support entrepreneurs and startups in Egypt, as well as in Arab and African markets. Through the agreement, Openner and Benya Group will create a joint committee to select eligible startups and provide them with the necessary resources.
Nov. 9, 2021

EGYPT – South Africa-based Vodacom purchases majority shares in Vodafone Egypt
Vodafone International Group has approved the sale of its shares in Vodafone Egypt to its South African subsidiary, Vodacom. The deal, expected to be finalized by March 2022, is worth USD 2.47 bn. Egyptian company Telecom Egypt owns 44.95% of Vodafone Egypt, while the remaining shares are owned by Vodafone International Group and will soon be transferred to Vodacom. The deal comes as Vodacom is looking to further expand its presence on African markets. The company already operates in South Africa, Tanzania, Kenya, Mozambique, Congo, and Lesotho, with a market capitalization of USD 16.63 bn.
Nov. 10, 2021

EGYPT – Egypt imposes a 10% tax on imported mobile phones to encourage local production
The Egyptian Ministry of Finance has imposed a 10% customs tax on imported mobile phones to stimulate the national industry and encourage local production. The decision comes amid a reform in Egypt’s IT sector, seeking to turn the country into a regional leader in the field. Computers and their accessories, as well as tablets, are exempt from the new tax. However, the ministry did not reject the idea that a similar tax could be imposed on these items in the future.
Nov. 29, 2021

MOROCCO – Morocco and Portugal launch a joint Economic Council
The General Confederation of Enterprises in Morocco (CGEM) and the Confederation of Enterprises of Portugal, the largest employer associations in their respective countries, have signed a cooperation agreement to put in place a Morocco-Portugal Economic Council. The council’s objectives are to redefine partnership domains between the two countries, create a roadmap for developing bilateral economic cooperation, and facilitate exchange between Moroccan and Portuguese businesses.
Nov. 22, 2021

TUNISIA – French car equipment manufacturer Bontaz opens a new factory in Tunisia
French car equipment manufacturer Bontaz has inaugurated a new production unit in the El Mghira Industrial Zone, northeastern Tunisia. The factory is 6,500 square meters large and cost an investment budget of EUR 20 mn. It created 800 new jobs. Bontaz, present in Tunisia since 2007, has another production unit in the same industrial zone, as well as a research and development center.
Nov. 10, 2021

EGYPT – Egyptian Government bans unvaccinated citizens from accessing public establishments
The Egyptian Government has decided that no citizens will be allowed to enter any state-run building unless they are vaccinated against COVID-19, starting December 1. The decision concerns access to public administrations and establishments, as well as universities. Unvaccinated university students will be banned from taking exams in December.
Nov. 15, 2021

EGYPT – Egypt suspends flights with South Africa due to the new coronavirus variant
Egyptian national airline EgyptAir has announced the suspension of its flights to and from Johannesburg, South Africa. The suspension comes after the detection of the new Omicron coronavirus variant in South Africa. Egyptian authorities have also imposed a mandatory rapid COVID-19 test upon arrival for incoming passengers from Lesotho, Botswana, Zimbabwe, Mozambique, Namibia, and Eswatini. Travelers who test positive will be banned from entering Egyptian territory and will have to return to their countries.
Nov. 27, 2021

MOROCCO – Morocco fully lifts COVID-19 night curfew
The Moroccan Government has decided to lift the nationwide night curfew implemented to curb the spread of COVID-19, starting November 10. Citizens can also travel freely between cities, without presenting their vaccination pass. The government, however, has maintained the obligation of presenting a vaccination pass or a vaccination exemption certificate to access indoor public spaces, such as shopping centers, coffee shops, restaurants, and gyms.
Nov. 9, 2021

MOROCCO – Morocco closes its air borders for two weeks
Morocco has decided to fully close its air borders for two weeks, starting November 29. The suspension concerns all incoming and outgoing passenger flights, except for special repatriation flights organized to transport stranded tourists out of the country. The decision seeks to prevent the spread of the new Omicron coronavirus variant in Morocco. It is still unclear whether the Moroccan government will extend the suspension after December 13.
Nov. 28, 2021

TUNISIA – Tunisia to impose COVID-19 vaccination pass in schools and universities
The Tunisian Government has announced that the COVID-19 vaccination pass will become mandatory in all public and private schools and universities in the country, starting December 22. The decision concerns teachers, employees, visitors, and students who are more than 18 years old.
Nov. 23, 2021 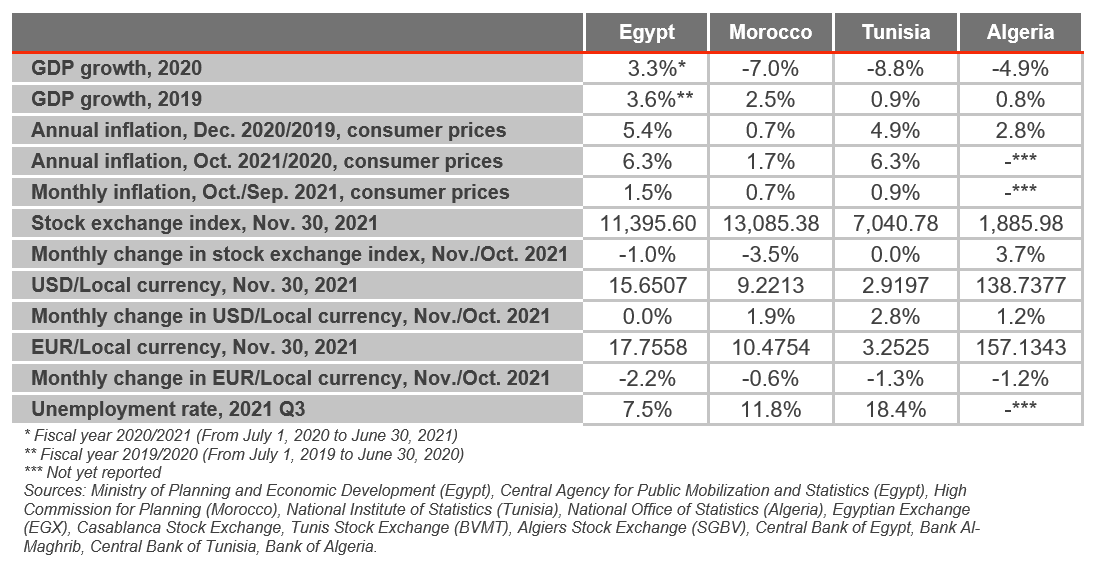