EGYPT – German real estate operator Apleona to manage a ‘therapeutic resort’ in Egypt
German real estate management company Apleona and Egyptian real estate development operator DM Development have inked an agreement to build the first project for recreational medical tourism in Egypt. The project will be located in the coastal town of Ain Sokhna and will require a budget of EGP 300 mn (EUR 11.5 mn). The “therapeutic resort” aims to attract 29,000 tourists annually and will create around 1,000 new job opportunities.
Nov. 1, 2022

EGYPT – Saudi Arabia’s ACWA Power to build a 10-gigawatt wind power plant in Egypt
Saudi energy company ACWA Power has signed an agreement with Egypt’s New and Renewable Energy Authority and the Egyptian Electricity Transmission Company to begin technical studies for building a 10-gigawatt wind electric power project in Egypt. The exact location of the power plant and the budget allocated for the project are yet to be determined.
Nov. 2, 2022

EGYPT – EBRD invests an additional USD 41.5 mn in Egyptian renewable energy company Infinity
The European Bank for Reconstruction and Development (EBRD) has increased its equity stake in Egyptian renewable energy operator Infinity through a USD 41.5 mn investment. The EBRD became a shareholder in Infinity in 2020 when it invested USD 60.0 mn in the company. The new investment seeks to support Infinity’s expansion in Africa by acquiring Lekela Power, a Dutch renewable energy multinational with several projects in the continent. The acquisition will add 1.1 gigawatts of operational assets to Infinity’s portfolio in Africa.
Nov. 17, 2022

EGYPT – Emirati company AMEA Power to build two power plants in Egypt worth USD 1.1 bn
Dubai-based energy projects operator AMEA Power has signed a contract to build two projects in Egypt, worth USD 1.1 bn. The first project is a solar power plant in Kom Ombo, southeastern Egypt, with a budget of USD 500 mn, while the second is a wind farm in Ras Ghareb, on the Red Sea coast, with a budget of USD 800 mn. The production capacity of each project is 500 megawatts. The projects will be funded by the International Finance Corporation, the Dutch Entrepreneurial Development Bank, the Japan International Cooperation Agency, the Japan Bank for International Cooperation, and the Sumitomo Mitsui Banking Corporation.
Nov. 30, 2022

MOROCCO – Stellantis to invest EUR 300 mn to double the production capacity of its Moroccan factory
Multinational automotive manufacturer Stellantis has announced its plan to invest EUR 300 mn in its Moroccan factory, located in the Atlantic Free Zone, 50 kilometers north of Rabat, in order to double its production capacity. The investment would increase the annual capacity of the Stellantis factory in Morocco from around 250,000 cars to over 450,000 vehicles. The project will also increase the number of jobs created by the production unit from 3,000 to 5,000. The factory produces several car models, including Peugeot 208, Citroën Ami, and Opel Rocks-e, which are mainly destined for European markets.
Nov. 9, 2022

MOROCCO – Siemens Gamesa searches for buyers for its factory in Tangier
Global renewable energy leader Siemens Gamesa has begun looking for a buyer for its wind turbine blades production unit in Tangier, northern Morocco. The factory is set to close in December due to Siemens Gamesa’s decreasing order book.
Nov. 17, 2022

MOROCCO – Belgium’s SABCA opens an airplane wings assembly unit in Casablanca
Belgian aerospace company SABCA has inaugurated a new production unit in Casablanca. The factory will specialize in the assembly of airplane wings for several clients, including Airbus, Pilatus, Daher, and Dassault. The new factory is built over a surface of 16,000 square meters and required an investment of over MAD 180 mn (EUR 16.2 mn). It has created 240 new jobs.
Nov. 23, 2022

TUNISIA – German automotive parts maker BRAUN Powerful Solutions to open a factory in Tunisia
German automotive parts manufacturer BRAUN Powerful Solutions has decided to open a production unit in Messadine, eastern Tunisia. The production unit will specialize in the manufacturing and assembly of cable harnesses. It will initially employ 200 workers before increasing to 1,000 employees in the medium term.
Nov. 4, 2022

ALGERIA – China’s Hisense enters the Algerian market
Chinese electric appliances manufacturer Hisense has expanded into the Algerian market through a partnership with local company Condor Electronics. According to the partnership agreement, Condor Electronics will produce Hisense products, including televisions, air conditioners, fridges, and washing machines, in its local factories. The Algerian company will also be in charge of marketing and distributing Hisense products in Algeria.
Nov. 10, 2022

EGYPT – Egypt hosts COP27 in Sharm El-Sheikh
Egypt hosted the 27th UN Climate Change Conference (COP27) in the coastal city of Sharm El-Sheikh between November 6-20. The conference witnessed the participation of around 92 heads of state and 35,000 representatives and delegates from 190 countries. One of the most important conclusions of the conference was the establishment of a loss and damage fund to support countries that are most vulnerable to the climate crisis.
Nov. 20, 2022

EGYPT – Turkish FM announces a possible normalization of diplomatic relations with Egypt soon
Turkish Foreign Minister Mevlut Cavusoglu has announced during a press interview that Turkey and Egypt may restore full diplomatic relations and mutually reappoint ambassadors in the coming months. The announcement was made after Egyptian President Abdel Fattah El-Sisi met with his Turkish counterpart, Recep Tayyip Erdogan, on the sidelines of the opening ceremony of the 2022 FIFA World Cup in Qatar. During their meeting, the two heads of state agreed to develop bilateral relations between their countries.
Nov. 28, 2022

TUNISIA – Tunisia hosts the 18th Francophonie Summit
Tunisia hosted on November 19-20 in the island of Djerba the 18th Francophonie Summit, which witnessed the participation of 31 heads of state and representatives from 89 different countries. The event concluded with the publishing of the Djerba Declaration, which includes several pledges to improve cooperation between member states of the International Organization of the Francophonie.
Nov. 20, 2022

ALGERIA – Algeria completely abolishes COVID-19 travel requirements
Algerian authorities have decided to completely remove the entry and exit restrictions that were in place to combat the spread of the COVID-19 pandemic. From the start of November, travelers can freely enter and leave Algeria without any special conditions. The decision came in light of the improvement of the domestic sanitary situation in Algeria.
Nov. 1, 2022

ALGERIA – Algeria officially submits its candidacy to join BRICS
Algeria has officially submitted its candidacy to join the Brazil, Russia, India, China, and South Africa economic bloc, known as BRICS. Russia and China have already expressed their approval of the candidacy. Meanwhile, Brazil, India, and South Africa are still studying it before reaching a conclusion.
Nov. 7, 2022

ALGERIA – Slovenia to soon open an embassy in Algeria
Slovenian Foreign Minister Tanjia Fajon has announced her country’s intention to soon open a diplomatic representation in Algeria in order to improve bilateral diplomatic relations and economic cooperation. The Slovenian minister made the announcement during a meeting with Algerian President Abdelmadjid Tebboune in Algiers.
Nov. 15, 2022

MOROCCO – Morocco’s annual inflation decreases to 8.1% in October 2022
Morocco’s annual inflation rate decreased to 8.1% in October 2022, down from 8.3% in September. The figure is attributed to a 13.8% annual increase in the prices of food products, along with a 4.3% increase in the prices of non-food products. The categories that witnessed the highest annual increases in prices besides food products were transportation (12.6%) and household items (6.7%). Meanwhile, health services (0.1%) and accommodation and utilities (1.1%) witnessed the lowest increases.
Nov. 22, 2022

ALGERIA – Algeria’s annual inflation rate averages 9.4% in recent months
Algeria’s annual inflation rate has averaged around 9.4% in recent months, according to a study by the International Monetary Fund (IMF). The IMF conducted the study between November 6-21 to determine the macroeconomic situation in Algeria, in light of the lack of official statistics. According to the IMF, Algeria’s inflation is at its highest rate in 25 years.
Nov. 21, 2022 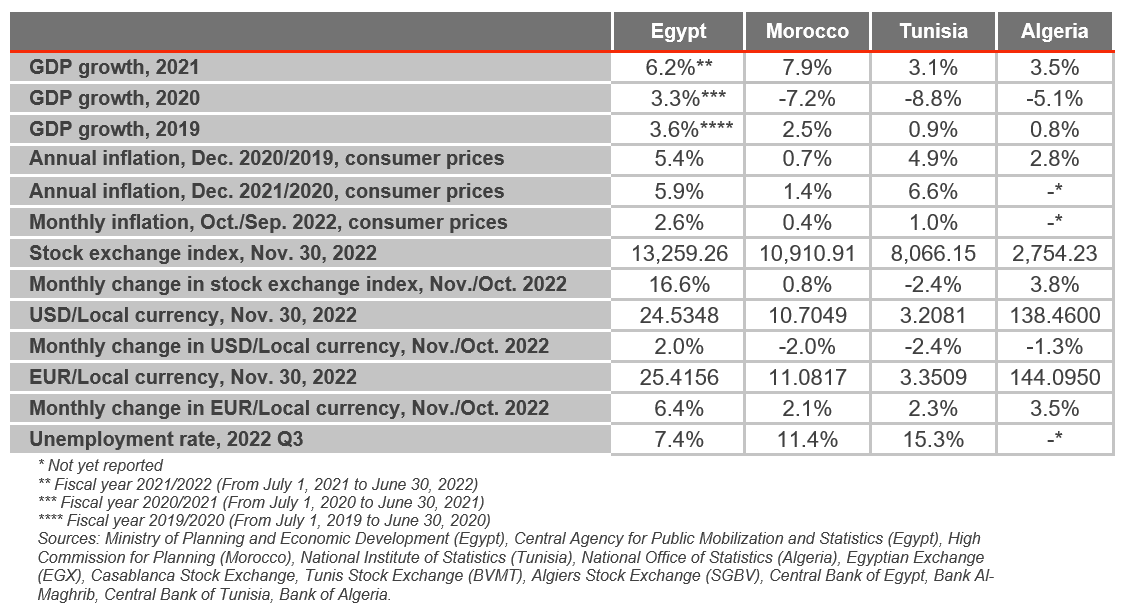