MOROCCO – Orange Opens Middle East/Africa Headquarters in Casablanca
French telecommunications company Orange has opened its new Middle East/Africa operational head office in Casablanca. The office “sends a highly symbolic message, a turning point in the history of the Group that provides further proof of our desire to be even closer to our customers and to make Orange MEA the preferred multi-services operator for people in Africa and the Middle East,” stated CEO of Orange MEA Alioune Ndiaye. Orange MEA has an average annual growth rate of 6%. Present in 18 countries in the region, it had 125 million customers at October 30, 2019. The company invests over USD 1 bn per year into its networks in the region.
January 8, 2020

MOROCCO – Sound Energy Receives Approval for Gas Pipeline
Sound Energy, an African and European upstream gas company, has received the environmental approval from Moroccan authorities to build a new gas pipeline in the country’s eastern region. The new Tendrara Gas Export Pipeline, 120 km long and 20 inches wide, will cross through the Figuig and Jerada provinces to connect a proposed gas treatment and compression station to the Gazoduc Maghreb Europe pipeline. The plant and compression station is awaiting approval.
January 13, 2020

MOROCCO – Morocco’s Central Bank Becomes Member of the Bank for International Settlements
Bank Al-Maghrib has become a member of the Bank for International Settlements (BIS), an international financial institution owned by central banks to foster international financial cooperation. The BIS Board of Directors also invited the central banks of Kuwait and Vietnam, taking the number of members to 63. “Reviewing membership at regular intervals ensures that the membership base remains in keeping with the Bank’s global profile and its mandate to promote global monetary and financial stability,” said the chair of the BIS Board in a statement.
January 14, 2020

MOROCCO – Korean Hands Corp Opens Aluminum Wheel Rim Plant in Tangier
The Korean aluminum wheel rim manufacturer Hands Corp has inaugurated its USD 472 mn plant at Tangier Automotive City. The plant will initially produce 4 million rims per year, increasing to 8 million per year, 85% of which will be for export. The factory is built over 23 hectares and will create 1600 jobs. The Hands Corp plant is the third largest international investment in the Moroccan automotive sector, after the Renault and PSA Group plants. The president of Hands Corp stated that the Tangier plant, the group’s eighth plant and the first outside South Korea and China, would become Hands Corp’s largest production site in the world.
January 15, 2020

MOROCCO – Morocco to Build Four Large Dams in Fez-Meknes Region
Director of the Sebou Water Basin Agency Samira El Haouat announced the USD 694 mn plan to construct four large dams in the Fez-Meknes region by 2027. The current storage capacity of the Sebou Hydraulic basin is around 5.549 billion cubic meters. The addition of four new dams will bring the total to 8 billion cubic meters. 28 smaller dams are also confirmed for construction in the region.
January 28, 2020

TUNISIA – BERD Lends USD 2.4 Mn to Tunisian Microfinance Institution
The European Bank for Reconstruction and Development (BERD) has lent USD 2.4 mn to Advans Tunisie, the Tunisian subsidiary of the Luxemburg-based microfinance bank Advans. Advans Tunisie will use these funds to finance small and medium sized businesses and to reinforce its own institutional capacity and risk management strategy. The loan aims to increase Tunisia’s competitiveness through opening the market and reinforcing governance, the BERD representative stated. Advans has 15 offices across Tunisia.
January 8, 2020

TUNISIA – Tunisia Receives USD 84 Mn from Germany for Water and Solar Projects
The Tunisian State has received USD 84 mn loan from the Kreditanstalt für Wiederaufbau (KfW), the German development agency, to finance several solar and water management projects. USD 24 mn has been allocated to the National Sanitation Office (ONAS) for the implementation of Phase II of the Industrial Areas Remediation Program, which includes the collection and treatment of wastewater. A USD 45 mn loan and USD 3.3 mn grant have also been allocated to the installation of 100 solar PV systems by the National Agency for Energy Management.
January 8, 2020

ALGERIA – Tosyali to Export 7,500 Tons of Reinforcing Rods in one Month
Tosyali Algerie, the Algeria-based subsidiary of the Turkish steel manufacturer Tosyali Holding, has announced its plan to export 7,500 tons of reinforcing rods from Mostaganem Port. Up to 4,000 tons will be exported to Great Britain and 3,500 tons to Angola, the company representative told the Algeria Press Service. Tosyali Algerie has been exporting steel products since 2018. In 2019, it exported 75,000 tons to the United States, 50,000 tons to Canada, 6,000 tons to Belgium from the Oran and Mostaganem ports.
January 9, 2020

MOROCCO – Morocco and Spain to Discuss Overlapping Territorial Waters
The Moroccan and Spanish Foreign Ministers have stated that the countries will soon hold talks about potentially overlapping territorial waters. This month, the Moroccan Government unilaterally passed two bills establishing the boundary of Morocco’s maritime area. The first bill sets a maritime border at 12 nautical miles off the coast of the contested territory of Western Sahara, and the second establishes an exclusive economic zone that could overlap with the waters of the Spanish-owned Canary Islands. There is also overlap on the continental shelf of both countries at a place where a 2016 expedition located the world’s largest known deposit of tellurium.
January 24, 2020

TUNISIA – Tunisia’s Largest Party Dismisses New Coalition Government
Ennahdha Party, the biggest party in the Tunisian parliament, has rejected a new government proposal on the basis that it excludes other parties. Ennahdha’s rejection of the proposal means the government could struggle to assemble a majority support in Parliament, risking a new parliamentary election. Parliament rejected on January 10 a government proposed by Ennahdha after months of negotiations between political parties to fill positions.
January 27, 2020

ALGERIA – Italy to Intensify Cooperation with Algeria
Italian Prime Minister Giuseppe Conte expressed in Algiers the “full readiness” of his country to intensify cooperation with Algeria, reports the Algeria Press Service. At a meeting with the Algerian president Abdelmadjid Tebboune, Conte added the countries would focus on cooperation in the renewable energy sector and small and medium sized enterprises sectors.
January 16, 2019

ALGERIA – Turkish President Visits Algeria
Tayyip Erdogan made a two-day visit to Algiers centered on discussing Turkish-Algerian economic cooperation amongst other things. Erdogan is the first foreign head of state on an official visit here since the December 12 election of Algerian President Abdelmadjid Tebboune.
January 26, 2019

ALGERIA – Algeria Imprisons Man Planning Suicide Attack
Algeria’s army has captured a man planning a suicide attack targeting peaceful anti-government protest marches in the capital, The man, named by the ministry only as Bachir R, was arrested in the Birtouta district of Algiers on Wednesday with an explosive belt, the defence ministry said in a statement.
January 30, 2019

MOROCCO – Morocco Ranks 12th in Global Retail Development Index
Morocco has ranked 12th out of 30 in the A.T. Kearney Global Retail Development Index. The index ranks emerging countries based on a set of twenty-five variables including country risk, market attractiveness, market saturation, and sales growth. According to the index, Morocco reached USD 47 bn in national retail sales in 2019. The country is ranked third on the African continent behind Ghana and Senegal. Tunisia ranked 25th, with USD 14 bn in sales. Algeria was not included in the report. According to the Moroccan Investment Development Agency, retail contributes to 11% of Morocco’s GDP and employs 12.8% of the labor force.
January 16, 2020

MOROCCO – Morocco’s Economy to Grow 3.5% in 2020
The Moroccan Commission for Planning (HCP) has forecast Morocco’s economic growth rate to reach 3.5% in 2020. Affected by low cereal production last year due to drought, economic growth dropped to 2.3% in 2019.  The HCP noted its forecast was based on the assumption of an average crop yield in 2020, a rise in exports, and government measures to raise tax revenue and investment. The World Bank has also predicted a growth rate of 3.5% in 2020.
January 14, 2020

TUNISIA – Exports and Imports Down Across 2019
According to figures from the National Institute of Statistics, foreign trade volumes dropped across 2019, compared to 2018. End of year figures showed a 5% drop in export volume and a 9% drop in import volume compared to 2018 end of year figures. The agricultural sector experienced a 16.6% drop in export volumes. Textile and leather exports dropped by 6%. Import volumes in the mechanical and electrical sector dropped by 12.1%. Textile and leather imports dropped by 8.4% and agricultural imports dropped by 6.7%. Export prices in Tunisian Dinars increased by 12.6% and import prices increased by 15.8% overall.
January 20, 2020

ALGERIA – World Bank Raises Algeria’s Growth Forecast
Algeria’s growth is anticipated to rise to 1.9% as policy uncertainty abates and investment picks up, the World Bank has announced. The World Bank had predicted a 1.7% growth in its June 2019 prediction.
January 8, 2020 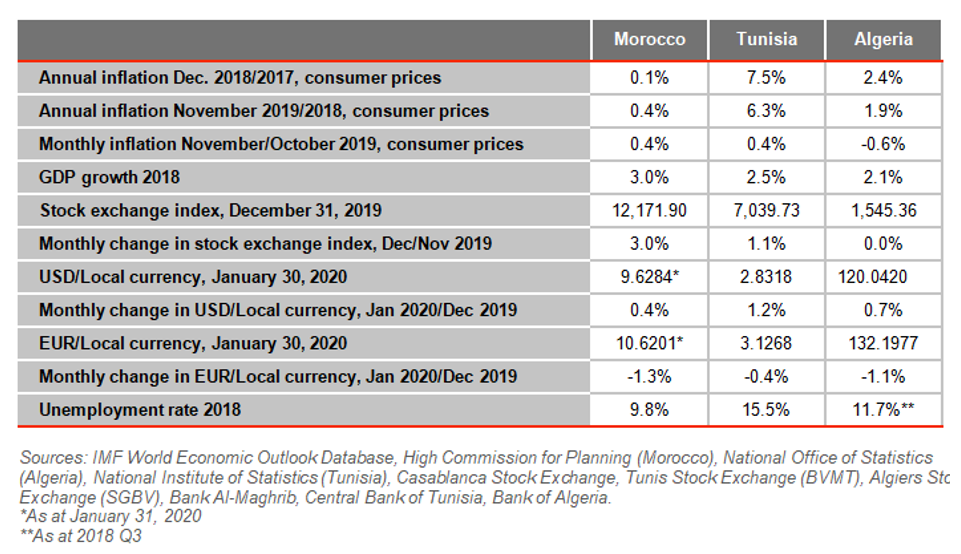