MOROCCO – Spanish Banking Group “Bankia” Expands to Morocco
The managing director of Bankia’s international division Jesus Miramon indicated that the new Bankia office in Casablanca would support Spanish companies investing in Morocco and would respond to the growing presence of Spanish enterprises based in the country. Morocco is a “priority market” when it comes to extending the presence of Spanish businesses internationally, Miramon added. According to 2018 data collected by Bankia, more than 800 Spanish companies are physically established in Morocco.
December 5, 2019

MOROCCO – Spirit Aerosystems to Develop Aeronautical Ecosystem
Since purchasing the Bombardier plant in Casablanca in October, the US company Spirit Aerosystems has announced it plans to expand the plant and develop an aeronautical ecosystem in the country. The factory, which produces airplane wing components, will increase from 10,000 square meters to 25,000 square meters, and will increase its workforce from 350 to 850 employees. Morocco’s Minister of Industry and the Executive Vice President and Senior Vice President of Spirit AeroSystems met in Rabat on December 16 to discuss Morocco’s aerospace strategy.
December 16, 2019

MOROCCO – French Multinational Alstom Begins Delivery of Prima M4 Locomotives to ONCF
Alstom delivered the first of 30 Prime M4 locomotives to Morocco in December. Alstom was awarded a USD 145 mn contract with Morocco’s national rail operator ONCF in February 2018 for the supply of the 30 locomotives. The locomotives will be manufactured in Alstom’s Belfort plant in France, and the Alstom team in Morocco will ensure the testing, the warranty service, and the maintenance. The locomotives have a nominal power of 5.5 MW, a maximum operating speed of 160 km/h and operate under 3 KV DC voltage. Twenty Prima locomotives have been in service in Morocco since 2011.
December 30, 2019

TUNISIA – EBRD USD 5.5 mn Loan to Foster Small Businesses
The European Bank for Reconstruction and Development has provided a USD 5.5 mn loan to the Compagnie Internationale de Leasing (CIL) to strengthen the competitiveness of small Tunisian firms. CIL is among the five largest leasing companies in the country. Liquidity and access to finance constrain the growth of many private businesses in the country. Micro, small, and medium-sized enterprises are the core of the Tunisian economy, accounting for more than 80 000 companies and 40% of the country’s GDP. The EBRD funds will help CIL finance small local businesses, a currently largely underserved segment of the economy
December 3, 2019

TUNISIA – Winners and Prices of Tunisia’s 500 MW Solar Project Tender
The Tunisian Ministry of Mines and Energy announced the Norwegian company Scatec Solar as the winning bidder for three projects of 60 MW, 60 MW, and 240 MW to be located in Tozeur, Sidi Bouzid and Tataouine respectively. The plants will hold 20 years of Power Purchase Agreements with the Tunisian Company of Electricity and Gas (STEG) for USD 25.34/MWh. The solar plants are expected to generate about 830 GWh per year. A consortium led by French company Engie and Morrocan energy producer Nareva won a 100 MW solar project in Gafsa governorate. Another consortium led by Chinese industrial group TBEA and Dubai-based energy producer AMEA Power won a 100 MW project in the Kairouan governorate.
December 17, 2019

TUNISIA – Global Hotel Group IHG Plans Entry into Tunisia
Intercontinental Hotels Group is considering entering Tunisia and further expanding into Egypt, with plans to add 48 properties to its MENA portfolio over the next three to five years. Talks are under way to rebrand some of the local hotels in Tunisia to IHG’s Hotel Indigo, Holiday Inn, and Intercontinental brands, though no timeline is set for the company’s debut, announced Matthew Tripolone, IHG vice president of development in Middle East and Africa.
December 22, 2019

ALGERIA – Peugeot Announces Plan to Recruit 340 Employees
Peugeot will employ 340 new employees at its Peugeot-Citroen assembly plant in Tafraoui. The factory will begin production in the first semester of 2020, with an assembly capacity of 25,000 vehicles per year in the first year, increasing to 75,000 vehicles by 2024. The plant has an investment value of USD 134 mn.
December 5, 2019

ALGERIA – Volkswagen Suspends its Activities in Algeria
The German car manufacturer announced on December 14 the suspension of all its activities in Algeria. The Volkswagen spokesperson stated that the suspension was due to the current political crisis in the country. Volkswagen has also suspended all parts deliveries to its local partner Sovac. The director of Sovac is currently under investigation in Algeria for corruption. The Sovac-Volkswagen assembly factory in Relizane has been closed since September. Over 3,000 Volkswagen assembly kits destined for the factory are blocked in various Algerian ports, preventing the factory from operating.
December 17, 2019

ALGERIA – Sonatrach Seals Deal with Tecnicas Reunidas and Samsung for New Refinery
A Tecnicas Reunidas (Spain) and Samsung Engineering (Korea) joint venture has been awarded a contract by Algeria’s state-owned oil company Sonatrach for the construction of the Hassi Messaoud refinery. The contract is estimated at USD 3.7 bn, with Tecnicas Reunidas holding USD 2 bn and Samsung Engineering holding USD 1.7 bn. The greenfield refinery will have a total crude distillation capacity of 100,000 barrels per day, and is part of a larger plan to supply more locally produced refined product to the domestic market in Algeria. The project is expected to be completed in 2024.
December 30, 2019

MOROCCO – Pompeo Conducts an Official Visit to Morocco
US Secretary of State Mike Pompeo met the Moroccan Head of Government and a number of officials in Rabat on December 5. The officials discussed several topics of strategic cooperation between Morocco and the US, including the development of commercial relationships between the two countries, and increasing investment in the automobile and aerospace sector. Pompeo also met the director of the national state police body (DGSN) to discuss counterterrorism and security initiatives in the region. Pompeo is the highest ranking US official to visit Morocco since the election of President Donald Trump.
December 5, 2019

TUNISIA – Tunisia’s PM Says He Has Formed a Government
Tunisia’s designated prime minister Habib Jemli submitted a proposed cabinet to President Kais Saied on January 1, but he has not yet publicly announced the names of the cabinet ministers. The new government must win majority support before taking office. The submission comes three months after the October 6 election that returned a divided parliament in which no party took more than a quarter of the seats.
January 1, 2020

ALGERIA – Algeria Appoints New Government
Algeria’s new president Abdelmadjid Tebboune was elected on December 12, receiving over 58% of votes from a turnout officially registered as 40% of the population. He is now building a new government, as the country continues to face significant political unrest and economic challenges. On January 4 he named former diplomat Abdelaziz Djerad as prime minister. Foreign Minister Sabri Boukadoum, Energy Minister Mohamed Arkab and Interior Minister Kamel Beldjoud continue in their posts. Abderrahmane Raouia was re-appointed finance minister, after previously serving in that post from 2017 until last March. Anti-government protests have continued since the election.
January 4, 2019

MOROCCO – CEBR Predicts Morocco’s GDP at 4.3% Over the Next Five Years
The UK economic consultancy Centre for Economics and Business Research has predicted that over the next five years, the annual rate of GDP growth is set to accelerate to an average of 4.3% per year. In its annual world economic league forecast report, the CEBR also noted that between 2026 and 2034, the average rate of GDP growth would increase further to 4.5% per year. The report noted that while the unemployment rate had dropped to 9.2% in 2019 from 9.8% in 2018, joblessness was an area in need of improvement for the economy in the years ahead.
December 26, 2019

MOROCCO – Morocco’s External Debt Reaches USD 34 bn in 2019 Third Quarter
Morocco’s external debt reached USD 34.4 bn in the third quarter of 2019. The figures from the Ministry of Economy, Finance and Administration Reform show that 42% of the debt is held by the central government, 53.9% is held by state-owned enterprises and the balance is split between the banking sector, public utility institutions, and territorial communes. Close to 50% of the funding comes from multilateral organizations including the European Union and the African Development Bank, 24.3% comes from bondholders and commercial banks, 17.1% comes from European countries, and the balance from other countries. Since 2014, Morocco’s external debt percentage to GDP has been at approximately 30%.
December 31, 2019 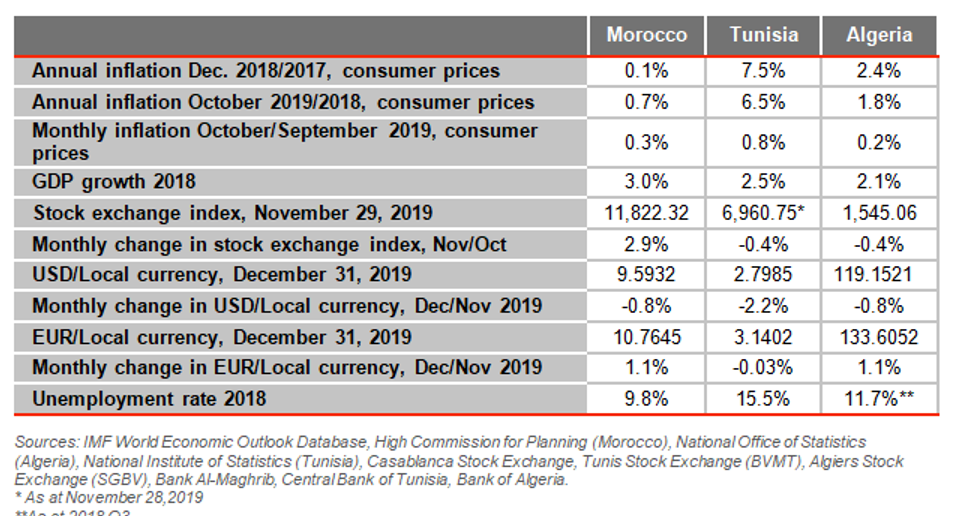