EGYPT – Siemens announces the beginning of the operation of a 250-megawatt wind farm in Egypt
German company Siemens has announced the beginning of the operation of the 250-megawatt Ras Ghareb Windfarm, on the western coast of the Gulf of Suez in Egypt. The project was implemented by Siemens Gamesa, a subsidiary specializing in renewable energy, and includes 96 wind turbines. Siemens is set to provide maintenance for the wind farm through a 15-year service agreement, while operations are supervised by the Egyptian Electricity Transmission Company and Egypt’s New and Renewable Energy Authority.
Dec. 2, 2021

EGYPT – Emirati retailer Spinneys opens a new store in Egypt
Emirati supermarket chain Spinneys has opened a new 1,500 square meter store in New Cairo, Egypt. The store is the latest step in Spinneys’ plan to further expand its presence across the Egyptian territory. The new store has created 100 new jobs. Spinneys, present in Egypt since 2006, has so far opened 17 stores in the country and employs approximately 2,000 people.
Dec. 14, 2021

EGYPT – Suez Canal Economic Zone to build a USD 2.6 bn methanol plant
Egypt’s Suez Canal Economic Zone has signed a USD 2.6 bn contract to build a methanol plant in the Ain Sokhna port and industrial complex, on the northwestern coast of the Suez Gulf. The project will create an integrated complex to produce ammonia and methanol. The partners included in the project are Egyptian companies Abu Qir Fertilizers and Helwan Fertilizers, along with Kuwaiti Al-Ahly Capital Holding. The project is expected to generate around 1,200 direct and indirect jobs.
Dec. 21, 2021

TUNISIA – Tunisair receives its first Airbus A320neo plane as part of a five-plane purchase
Tunisian airline Tunisair announced that it has received the first A320neo airplane, as part of a five-plane deal with Airbus. The airline received the first plane in December, while three other aircraft are set to be delivered in April, July, and September 2022. The fifth and final plane will be delivered in April 2023. Tunisair and Airbus signed the deal in October 2021 without disclosing its value. The purchase aims to expand Tunisair’s fleet to serve additional destinations by the summer of 2022.
Dec. 22, 2021

ALGERIA – Italian energy firm Eni signs a USD 1.4 bn deal to produce oil in Algeria
Algerian state-run oil and gas company Sonatrach has signed two agreements with Italian energy firm Eni. The first agreement is a USD 1.4 bn exploration and production contract of 45,000 barrels of oil equivalent per day on an onshore field in the Berkine basin, in central Algeria. The contract covers a total area of 7,880 square kilometers. The second agreement is related to developing renewable and new energies that aim to reduce Algeria’s carbon footprint.
Dec. 14, 2021

EGYPT – Egypt resumes flights to and from South Africa after a two-week suspension
Egyptian airline EgyptAir has announced the resumption of its weekly flights between Egypt and South Africa after a 13-day suspension due to the new coronavirus variant, Omicron. The airline will return to its regular frequency of one flight per week between Cairo and Johannesburg on Thursdays. Egypt had suspended flights to and from South Africa on November 27 after the World Health Organization classed the new variant that emerged in southern Africa as “a variant of concern.”
Dec. 9, 2021

EGYPT – Canada lifts its travel ban on Egypt
Canada has decided to lift its travel ban on 10 African countries, including Egypt, starting December 18. Following the decision, Egyptian air carrier EgyptAir announced the resumption of its weekly flights between Cairo and Toronto. The Canadian government had introduced the travel ban on November 30, in order to prevent the spread of the Omicron coronavirus variant.
Dec. 18, 2021

MOROCCO – Morocco extends the suspension of incoming flights and resumes outgoing flights
The Moroccan government has decided to extend the suspension of incoming flights to Morocco until further notice. Meanwhile, outgoing passenger flights have been allowed to resume. The government is also studying the possibility of repatriating Moroccan citizens stranded abroad. Moroccan authorities decided to suspend all international flights on November 29, following the rapid spread of the Omicron coronavirus variant around the world, notably in Europe and Africa.
Dec. 9, 2021

ALGERIA – Algeria resumes its diplomatic relations with France after a three-month hiatus
Algeria has decided to send back its ambassador to Paris, ending its diplomatic crisis with France. The Algerian President Abdelmadjid Tebboune had recalled his ambassador to France in October 2021 after French President Emmanuel Macron questioned the existence of “an Algerian nation” before the French colonization, accusing Algerian authorities of “fabricating its official history.” The return of the Algerian ambassador to Paris signals that diplomatic relations between the two countries are starting to recover from the crisis.
Jan. 5, 2022

EGYPT – Egypt to join the JP Morgan bond index for emerging markets in January 2022
Egypt has announced it will be joining the JP Morgan bond index for emerging markets by the end of January 2022. Egypt is eligible to join the index with 14 government bonds worth a total value of about USD 26 bn. JP Morgan announced in April 2021 that it had placed Egypt under review for including in the emerging markets index because of the country’s steady improvement in liquidity and access to onshore government bond markets on the foreign investor level. Egypt was previously included in the index but it was removed in 2011 after failing to meet its requirements. The upcoming inclusion will make Egypt the second country in Africa to join the index, besides South Africa.
Dec. 12, 2021

MOROCCO – IMF forecasts 6.3% GDP growth in Morocco in 2021
The International Monetary Fund (IMF) has predicted Morocco’s GDP to record a 6.3% growth in 2021. The financial institution also expects the Moroccan economy to maintain a positive momentum in the upcoming years. Finally, the IMF forecasts Morocco’s debt-to-GDP ratio to return to its pre-pandemic level of around 65%. The IMF released the predictions after achieving its study of the Moroccan economy and consultations with Moroccan authorities between November 30 and December 10.
Dec. 10, 2021 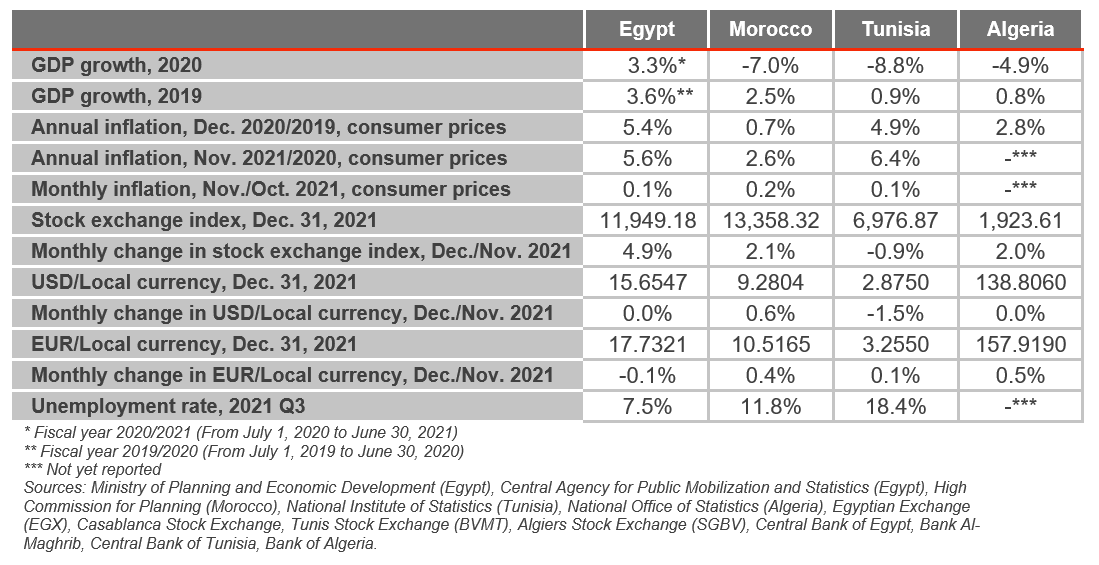