MOROCCO – Morocco creates new economic zone in Fnideq, near Ceuta
Morocco’s Head of Government Saad Eddine El Othmani has approved a decree relating to the creation of an economic zone in Fnideq, near the Spanish enclave of Ceuta. The zone will be managed by a subsidiary of the Special Agency of Tangier Med, the public company managing the activity of the nearby Tangier Med Port. The project aims to install the necessary infrastructure for economic and social development in the region, and to prevent smuggling between the Spanish enclave and Morocco.
June 29, 2020

TUNISIA – UPC Renewables and CFM sign financing agreement for Sidi Mansour wind farm
The global developer UPC Renewables has signed a financing agreement with Climate Fund Managers (CFM) for the Sidi Mansour wind farm project in the north of Tunisia. The USD 40 mn project will be the first privately-owned wind farm in Tunisia. It will have a capacity of approximately 30 MW of electricity, which will be sold to the Tunisian Electricity and Gas Company.
June 23, 2020

TUNISIA – Tunisia inaugurates first 100% Tunisian solar energy station
The Tunisian Minister of Energy, Mines and Energy Transition has inaugurated Tunisia’s first solar power energy station “Chams Enfidha.” Valued at USD 1.2 mn, the power plant is made up of 3,000 solar panels and has a 1 MW capacity. It is one of the sixteen renewable energy projects that recently obtained preliminary agreements for the production of electricity. Chams Enfidha is the first 100% Tunisian project. It has been delivered through a Public-Private Partnership (PPP).
June 30, 2020

ALGERIA – IRIS to begin exporting tires to United States
IRIS, the leading Algerian tire producer and the third producer across Africa, has announced it will sell tires to the United States. The IRIS factory has been operational for a year and launched its export operations six months ago. The IRIS brand is present in ten countries, including Spain, Morocco, and Portugal.
June 28, 2020

MOROCCO – Morocco lifts quarantine measures across most of the country
Morocco has lifted internal quarantine measures across most of the country, except in the cities of Tangier, Larache, Marrakech, and Kenitra. Full confinement has also been reinstated in the town of Safi after a COVID-19 hotspot was found in a fish processing factory. Across the rest of the country, businesses have resumed operations as normal, except beauty and hospitality businesses, which are subject to a 50% client capacity limit. Internal travel has resumed, including intercity trains and buses, and local flights. Morocco’s international borders remain closed and no announcement has been made regarding when they may reopen.
July 05, 2020

TUNISIA – Tunisian transport minister meets EU ambassador to discuss strategic positioning
The Tunisian Minister of Transport and Logistics Anouar Maarouf met with European Union (EU) Ambassador in Tunis Patrice Bergamini to discuss ways to develop Tunisia’s strategic position as a logistical center in the Mediterranean and as an exchange platform between Europe and Africa. The parties discussed proposals for joint infrastructure projects and broader cooperation between Tunisian and the EU.
June 19, 2020

TUNISIA – Tunisia officially withdrawn from EU money laundering high-risk third jurisdictions
Tunisia has been removed from the European Union’s list of high-risk third jurisdictions considered to have deficiencies in their anti-money laundering and countering the financing of terrorism (AML/CFT) regimes. The EU list provides guidance on countries that do not meet international standards of financial transparency and are therefore less reliable as sites for foreign investment. The decision to remove Tunisia from the list takes into account the removal of Tunisia from the Financial Action Task Force (FATF) watch list in October 2019, following measures taken by the Tunisian authorities to strengthen the effectiveness of Tunisia’s AML/CFT regime.
June 19, 2020

TUNISIA – Tunisia lifts all COVID-19 restrictions and opens borders to 105 countries
The last phase of Tunisia’s progressive deconfinement strategy ended on June 14: 100% of economic activity in the country has now resumed, subject to sanitary measures (wearing a mask, hand hygiene, social distancing). Sea and air borders reopened on June 27 to 105 countries classified on either a green list (including China, Germany, Switzerland, and Austria) or an orange list (including India and France). Travelers from green list countries are not subject to a quarantine period but must present a negative COVID-19 result on arrival. Travelers from orange listed countries must self-isolate for 14 days on arrival. A number of countries have not yet been classified, including the US and Turkey.
July 01, 2020

ALGERIA – EU expresses concern over deteriorating human rights situation in Algeria
The European Union foreign affairs chief Josep Borrell has voiced the EU’s concern over the deteriorating human rights situation in Algeria, including the arbitrary detention of activists and opponents of the regime. The EU has voiced concern that the Algerian authorities are exploiting the COVID-19 pandemic to tighten repression against regime opponents. Several NGOs including HRW, Amnesty International, International Federation of Human rights, and the World Organization Against Torture have all criticized the repression of human rights activists in Algeria.
June 08, 2020

ALGERIA – Algeria extends lockdown measures
The Algerian Prime Minister has announced that strict confinement measures will remain in place given a new surge in infections. In 19 administrative divisions, including in the capital Algiers, markets and commercial centers will be closed until July 13. All land borders remain closed and the suspension of international air and maritime travel remains in place. People are required to wear a protective mask when in public and an 8pm to 5am curfew is in effect in 29 of Algeria’s 48 provinces, including in Algiers.
June 29, 2020

MOROCCO – Morocco’s exports down 19.7% in first four months of 2020
The Moroccan Exchange Office has announced a 19.7% drop in exports between January and April this year, amounting to a USD 2 bn loss. In April alone, exports dropped by 47.2%, a USD 1.2 bn loss, while imports contracted by 33%, or USD 1.5 bn. The trade deficit narrowed by USD 133 mn to reach USD 6.9 bn. The country’s major export streams, with the exception of phosphate, have all suffered from the disruption of supply chains and economic activity in Morocco. Morocco’s automobile exports fell by 39% at the end of April, aeronautics by 34%, textiles by 28%, and foodstuffs by 7%.
June 01, 2020

MOROCCO – World Bank lends USD 500 mn to promote digital transformation
The World Bank has announced a USD 500 mn loan, as part of the Financial and Digital Inclusion Development Policy Financing Project to support mechanisms promoting Morocco’s digital transformation. The program seeks to ensure “access to more competitive digital infrastructure and services for business and individuals.” The program aims to support businesses to expand their projects. The World Bank senior economist Dalia Al Kadi added that it would also allow Moroccan startups to “import digital services that are not available in Morocco.”
June 23, 2020

TUNISIA – World Bank predicts a 4% fall in Tunisia’s GDP growth for 2020
Tunisia’s GDP growth is expected to contract by 4% in 2020 as a result of the COVID-19 pandemic, according to a recent World Bank report. This fall is expected to arise from the disruptions caused by the pandemic response measures, the decline in tourism and the sharp drop in external demand and the subsequent reduction in exports. According to figures released on June 10 by the Tunisian Central Bank, tourist revenues fell by 38% in the first six months of 2020. The World Bank does nonetheless forecast a GDP growth of 4.2% in 2021.
June 12, 2020 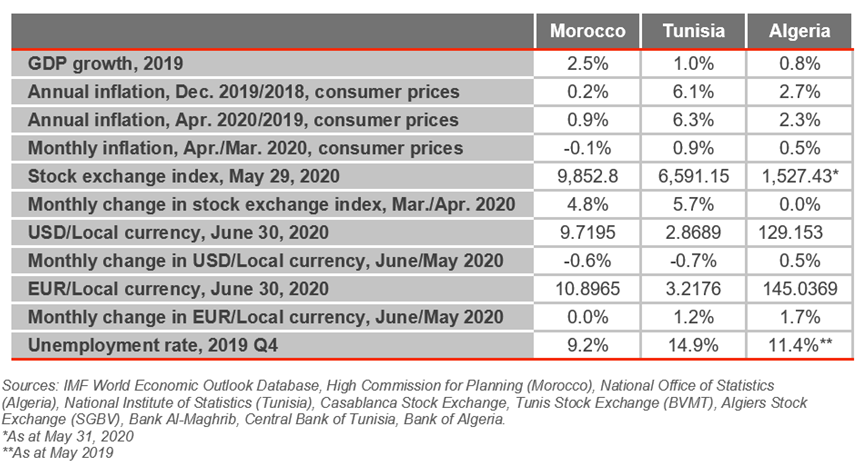