MOROCCO – World Bank Highlights Morocco’s Offshore Wind Potential
World Bank senior energy specialist Mark Leybourne has said that Morocco has a “fantastic” offshore wind resource “that is too attractive to ignore.” A World Bank analysis of emerging markets for offshore wind was undertaken by the Energy Sector Management Assistance Program in partnership with the International Finance Corporation. It focused on Morocco and a number of other countries, and found that Morocco’s Atlantic coastline had excellent wind speeds in shallow and deeper waters suitable for offshore wind farms with both floating or fixed foundations. While grid access points exist near the potential development areas, the report nonetheless noted that substantial reinforcement would be needed to then transmit power to the main demand centers of Rabat and Casablanca.
May 18, 2020

MOROCCO – Construction Projects Resume in Morocco
After a two-month halt due to the COVID-19 pandemic, construction sites in Morocco have resumed operations, the Minister of Urban Planning Nouzha Bouchareb said during a meeting with the Moroccan housing operator Al Omrane. Construction sites must comply with health and safety measures in accordance with the Moroccan authorities’ guidelines, the Minister emphasized. The construction sector in Morocco was one of the hardest hit by the pandemic. According to a survey from the High Commission for Planning (HCP), the sector lost 170,000 jobs (approximately 24% of total construction jobs in the country), with 60% of construction companies in Morocco completely suspending their activities due to COVID-19.
May 25, 2020

ALGERIA – Gloviz Car Assembly Factory Temporarily Suspends Operations
The Gloviz factory, which specializes in the assembly of the South Korean car brand KIA, has announced the suspension of its operations, effective from May 17. Gloviz specified in a press release that the closure was not permanent and was due to delays in receiving knock-down and semi-knock down kits. The decision to halt production comes after the government announced it would indefinitely ban the import of spare parts used in assembly lines. According to Fitch Solutions, operational cracks, including the shortage of kits, are causing “serious risks” in Algeria’s automobile production industry.
May 17, 2020

ALGERIA – Algeria to Launch Mega Solar Power Project
The Algerian Minister for Energy Mohamed Arkab has announced plans for “Tafouk 1”, a mega photovoltaic (PV) solar power plant project. The project aims to deliver four gigawatts of solar capacity between 2020 and 2024, increasing Algeria’s solar capacity ten fold. Several PV solar plants will be built across the country, over a total area of 6,400 hectares. The project is valued at between USD 3.2 bn and USD 3.6 bn, and is expected to create up to 56,000 jobs during the construction phase. Whether international partners will be involved in the project has not yet been specified.
May 20, 2020

MOROCCO – Morocco and Japan Boost Relations Through Tax and Investment Agreements
The Japanese House of Councilors has adopted an agreement that was signed between Morocco and Japan to avoid double taxation and prevent tax evasion. In mid-May, the Japanese Parliamentary Chamber also approved an agreement on the protection and promotion of investments between Morocco and Japan. Morocco currently hosts 72 Japanese companies that operate in the automotive, energy, chemicals, banking, and logistics industries. The number of Japanese companies in Morocco has nearly doubled over the past three years, the Moroccan embassy in Japan stated. The companies employ more than 40,000 Moroccans.
May 27, 2020

MOROCCO – Morocco Eases Lockdown Restrictions
Moroccan authorities have extended the lockdown until June 10, which means that officially, people are still only allowed to go out to buy food or medicine, and to perform key jobs. However, separate announcements have been made by the Minister of the Economy, to gradually reopen businesses, indicating a progressive deconfinement. Travel between cities is now permitted for business purposes, and train travel is due to resume from June 1. Kiosks, bookshops and other businesses are able to open and preparations are being made to re-open airports (noting it is still unclear when international air travel will resume).
May 28, 2020

TUNISIA – Global Alliance for Trade Facilitation (GATF) to Launch in Tunisia
The German embassy in Tunis has announced that the Global Alliance for Trade Facilitation (GATF) will launch in Tunisia by the end of the year. “This initiative aims to reduce the cost and time of doing business in order to increase the competitiveness of Tunisian products on international markets,” the embassy said. The GATF is implemented by GOPA Consulting Group and financed by the German Agency for International Cooperation (GIZ). Germany is one of the six countries funding this initiative, alongside the United States, Canada, the United Kingdom, Australia and Denmark.
May 13, 2020

TUNISIA – Tunisia Currently Developing a Partnership Charter with the EU Automotive Sector
The Ministry of Industry is currently working on the development of a partnership charter with the private sector in the European Union automotive industry. The charter aims to develop the Tunisian automotive components manufacturing and assembly sector and to attract leading manufacturers from the European Union.
May 23, 2020

TUNISIA – Protests Break Out Over Unemployment in Face of Economic Downturn
Hundreds of Tunisians have protested in at least seven cities across the country, demanding jobs and economic opportunities. The official unemployment rate is currently at 15.3% but is set to rise, with the IMF expecting the economy to shrink by 4.3%. Protesters calling for jobs also staged a sit-in at the state-run Gafsa phosphate mine, halting output.
May 28, 2020

TUNISIA – Tunisia Eases Lockdown Measures, Enters Phase 2
Tunisia has entered Phase 2 of its progressive deconfinement. Between May 26 and June 4, cafes, snacks and restaurants will be open for takeaway. Up to 75% of industrial, administrative and private practices and 50% of day cares will open. In Phase 3, between June 4 and June 14, mosques, hotels and restaurants will reopen. Travel between governates will also be allowed. From June 15 onwards, all economic activities will be able to resume, provided social distancing measures are respected. The government has also announced that land, air and sea borders will reopen on June 27.
June 03, 2020

ALGERIA – Algeria Extends Lockdown to Mid-June
Algerian authorities have announced the extension of the lockdown to June 13 across most of the country, amidst rising infection numbers. Public transport, mosques, schools and non-essential businesses will remain closed, and the night time curfew imposed during the month of Ramadan will remain in place.
May 29, 2020

MOROCCO – Morocco’s Port Activity Increases by 6.3% in First Four Months of 2020
The National Port Authority has released figures showing Moroccan port trade volumes increased by 6.3% in the first four months on 2020, compared to the same time in 2019. The four first months of 2020 saw an unprecedented increase in grain import volumes, up 36% compared to the same period in 2019. Coal imports recorded an increase of 5%. Meanwhile, the volume of exported fertilizers grew by 63% and raw phosphate exports increased by 6%. The Jorf Lasfar port near Casablanca recorded the highest traffic volume in Morocco with 12.7 million tonnes by the end of April (a 13.1% yearly increase), followed by the Casablanca port with 10.3 million tonnes (+4.9%), and the Agadir Port with 2.2 million tonnes (+8.6%). The southern port of Tan-Tan also recorded an increase in traffic volume of -51.5%.
May 5, 2020

MOROCCO – Fitch Downgrades Outlooks for Three Moroccan Banks
Fitch Ratings has downgraded the outlooks of three Moroccan banks, Attijariwafa Bank (AWB), BMCE Bank of Africa (BOA) and Credit Immobilier et Hotelier (CIH), from “stable” to “negative.” Fitch considers Morocco’s ability to support the banks as “moderate” given the repercussions of the pandemic on the economy. Fitch expects the Moroccan economy to contract 4.5% in 2020. The agency also predicts general government debt to rise to 58% of GDP in 2020 from 52.5% in 2019. Last month, Fitch Ratings revised the outlook on Morocco’s long-term foreign currency issuer default rating to negative from stable and affirmed the country’s rating at “BBB-“.
May 18, 2020

MOROCCO – Lockdown Costs Moroccan Economy USD 100 mn per Day
According to a statement by Morocco’s Minister of Economy Mohamed Benchaaboun, the country loses up to USD 100 mn per day during lockdown. The Minister added that the nation-wide quarantine imposed since mid-March will cause the national economy to lose 6 points of GDP growth in 2020. The loss is due to the decline in revenue of both Morocco’s tourism and industrial export activities during the crisis. The automobile and aeronautics export sectors have also been at a near stand-still during the lockdown.
May 19, 2020

MOROCCO – Africa Development Bank Lends USD 300 mn to Support COVID Response
The African Development Bank (AfDB) has approved a USD 300 mn loan to support Morocco’s health, economic and social responses to COVID-19. The funds will go towards increasing the number of hospital centers authorized to carry out virological screening. The funds will also go towards promoting purchasing power, providing financial assistance to 4.3 million households in the informal sector and 800,000 employees affiliated with the state social security fund. Finally, to promote economic recovery, the funds will be used to facilitate access to financing for entrepreneurs and small and medium-sized enterprises. The Arab Monetary Fund has also provided a USD 127 mn loan to support Morocco’s COVID-19 response.
May 27, 2020

TUNISIA – IBRD Lends Tunisia USD 20.3 mn
The International Bank for Reconstruction and Development has lent Tunisia USD 20.3 mn for its fight against the COVID-19 crisis. The loan will be paid out over the next 15 years at a 0.5% interest rate. The World Bank earlier this month announced a USD 35 mn loan to support the purchase of health equipment. The IMF has also recently approved a USD 754 mn loan, earmarked for health spending, strengthening social safety nets, and supporting small- and medium-sized firms hit by the crisis, as well as ensuring an adequate level of international reserves.
May 11, 2020

TUNISIA – Tunisian GDP Shrinks 1.7% in First Quarter
Figures released by the Tunisian National Institute of Statics show that the country’s GDP shrank 1.7% year-on-year in the first three months of 2020. The IMF announced in April that it expects the Tunisian economy to shrink by 4.3% this year, the steepest contraction in 60 years. The European Bank for Reconstruction and Development (BERD) has however been more optimistic, announcing an expected 2.5% decrease in GDP. The BERD also announced an expected 2.5% growth of GDP in 2021.
May 22, 2020

TUNISIA – Central Bank Sets Up Exceptional Financing Measures for Businesses
The Tunisian Central Bank (BCT) has set up new measures that allow banks to grant businesses exceptional financing in order to promote the country’s financial stability. The amount of exceptional financing and the duration of repayment will be fixed on a case by case basis, noting that the funding amount must not exceed the ceiling of 25% of the business’ 2019 turnover excluding tax, or for companies that started their operations after January 2019, the equivalent of six months’ payroll. The financing repayment period must not exceed seven years, including a two year grace period.
May 28, 2020

TUNISIA – Ministry of Industry Sets up Support Unit for SMEs
The Ministry of Industry has set up a new support unit for small- and medium-sized enterprises (SMEs) affected by the COVID-19 pandemic. The unit will monitor the situation of affected enterprises and will orient them towards specialized structures based on their specific needs. SMEs can apply online for assistance through an online platform dedicated to the support unit.
May 30, 2020

ALGERIA – Finance Minister Announces New Start-up Investment Fund
The Minister of Finance, Abderrahmane Raouya, has announced the upcoming launch of an investment fund worth USD 418 mn, aimed at the financing of start-ups. The fund has been established so that start-ups can access funds without having to go through the traditional banking system, which imposes strict lending measures.
May 19, 2020

ALGERIA – Algeria’s 2020 Budget Deficit Projection Increases to 10.4% of GDP
Algeria’s Finance Minister has announced a revised expectation for the 2020 budget deficit at 10.4% of GDP, up from the previous forecast of 7.2%. The increase is due to lower revenues from oil and gas. In April, OPEC decided to cut its global production by 10% of global output, significantly affecting Algeria. Algeria lost USD 1 bn in oil and gas export revenue in the first two months of 2020 due to the fall in oil prices triggered by COVID-19. On May 3, the government slashed the national budget by 50%.
May 26, 2020 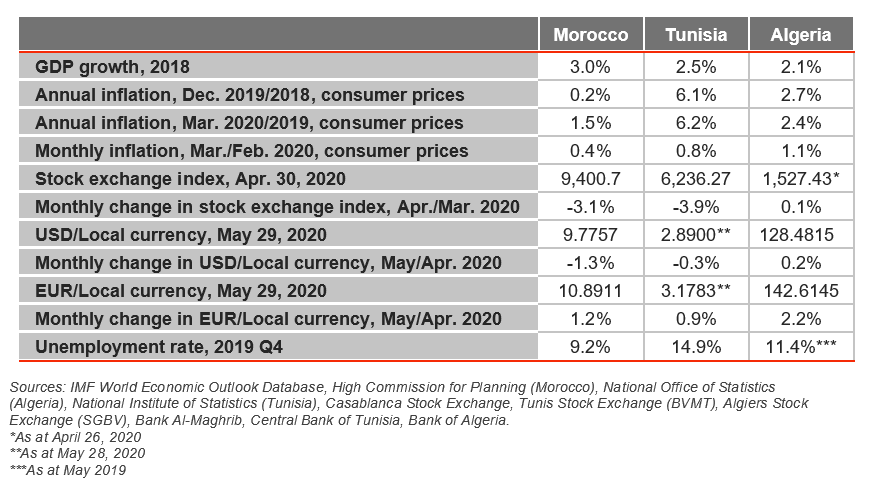