EGYPT – Hyundai Rotem to supply Cairo metro network with 32 trains
South Korean company Hyundai Rotem has signed a deal with the Egyptian Ministry of Transportation to supply 32 metro trains for the Cairo network. The first deal is worth EGP 6.4 bn (EUR 334 mn) and includes vehicle maintenance for eight years. Hyundai Rotem is set to deliver all the trains by 2023. Each of the vehicles has a maximum legal speed of 80km/h and room for 1,740 passengers.
May 12, 2021

MOROCCO – Sound Energy to build a gas liquefaction plant in eastern Morocco
British oil and gas company Sound Energy is set to build a liquefaction plant in Tendrara, eastern Morocco, to begin commercializing the natural gas reserves of the region. The company expects to cover 9% of Morocco’s needs in liquefied natural gas (LNG) by the year 2025. Sound Energy had signed in 2018 a 25-year contract with Morocco’s National Office for Hydrocarbons and Mines (ONHYM) to exploit the natural gas reserves of Tendrara.
May 4, 2021

MOROCCO – Marita Group begins the construction of a luxurious real estate project in Rabat
International holding Marita Group has launched the construction works on the Dar Essalam Gardens Resort project in the Moroccan capital, Rabat. The real estate project consists of a luxurious residential neighborhood, made of “smart buildings.” The neighborhood will include 132 “smart” villas, equipped with high-tech facilities, along with a high-standing SPA, a luxurious hotel, an urban forest, and several green parks. Marita Group intends to sell the majority of the project’s villas to foreign diplomatic missions, but it also plans on renting some of the villas to foreign officials and VIPs who visit the Moroccan capital on official trips. Construction works are expected to end by 2024.
May 10, 2021

TUNISIA – Italian energy company SNAM plans to expand in Tunisia
Italian energy company SNAM has announced its plan to create an industrial platform in Tunisia. The platform would allow SNAM to collaborate with the renewable energy infrastructures available in Tunisia and to distribute its products, including green hydrogen and biomethane, in Europe. SNAM’s CEO made the announcement during a meeting with the Tunisian head of government, but he did not present a timeline for his company’s potential expansion in Tunisia.
May 6, 2021

TUNISIA – Tunisia offers 5,000 interest-free loans for companies impacted by COVID-19
The Tunisian Head of Government has announced that 5,000 companies impacted by the COVID-19 pandemic will benefit from loans of TND 5,000 (EUR 1,500). The loans will be free of interest. To benefit from the loans, businesses can register on the platform “Help Enterprise.” The head of government has also announced that companies heavily impacted by the COVID-19 pandemic won’t have to pay for the social benefits of their employees until the end of 2021.
May 12, 2021

ALGERIA – Ministry of Energy inaugurates new gas pipeline in western Algeria
The Algerian Ministry of Energy has inaugurated a new 197-kilometer-long gas pipeline in the west of the country. The pipeline links the gas-rich Naama province, near the Moroccan border, to the northwestern province of Ain Temouchent. The project cost more than DZD 32 bn (EUR 197 mn) and was accomplished by two Algerian companies. According to the Ministry of Energy, the pipeline seeks to strengthen Algeria’s gas exportation network and to expand gas supply in the west of the country.
May 6, 2021

EGYPT – Egyptian government imposes new closing hours on businesses
The Egyptian government has announced that shops, cafes, restaurants, and malls will have to close their doors at 9 p.m., starting May 5. Egyptian authorities have also banned concerts, weddings, meetings, and conferences. The new measures seek to curb the spread of COVID-19 in the country.
May 5, 2021

MOROCCO – Moroccan government shortens nationwide night curfew
Morocco’s government has announced the shortening of the night curfew implemented to curb the spread of COVID-19 in the country. Starting May 21, the nationwide curfew runs from 11 p.m. to 4:30 a.m. instead of 8 p.m. to 6 a.m. Cafes, restaurants, and stores are also allowed to keep their doors open until 11 p.m.
May 20, 2021

MOROCCO – Morocco alleviates restrictive measures against COVID-19
The Moroccan government has alleviated a series of measures implemented to curb the spread of COVID-19 in the country. The decision includes allowing citizens to organize gatherings of up to 50 people in closed spaces and 100 people in open spaces, increasing the legal passenger limit in public transportation to 75% of the capacity instead of 50%, and reopening theaters, cinemas, cultural centers, museums, historical monuments, beaches, and swimming pools. The decision went into effect on June 1.
May 31, 2021

TUNISIA – Tunisia allows inter-region travel, reopening of cafes and restaurants
The Tunisian government has announced that the ban on travel between regions in the country is no longer in place, starting May 14 at 5 a.m. The government has also announced several decisions that go into effect from May 17, including the resumption of face-to-face classes in schools and universities, the reopening of cafes and restaurants, and the shortening of curfew hours to become from 10 p.m. to 5 a.m.
May 12, 2021

ALGERIA – Electoral campaign begins in Algeria
The electoral campaign for the upcoming elections in Algeria, scheduled for June 12, began on May 20. The event will lead to the election of 407 deputies who will serve at Algeria’s National Popular Assembly for a five-year term. The elections will also lead to the appointment of a new Prime Minister from the winning party.
May 16, 2021

ALGERIA – Algeria reopens air borders with France, Spain, Tunisia, and Turkey
Algeria has partially reopened its international air borders with four countries: France, Spain, Tunisia, and Turkey. Algerian authorities will allow two weekly flights between Paris and Algeria, one with Marseille, one with Istanbul, one with Barcelona, and one with Tunis. Algeria’s national air carrier will operate the flights and seat priority will be given to Algerian citizens who were stranded abroad due to the COVID-19 pandemic or who need to travel abroad for studies or for professional reasons.
May 16, 2021

ALGERIA – Algerian government extends night curfew by one month in 19 Wilayas
The Algerian government has once again extended by one month the night curfew implemented to curb the spread of COVID-19 in 19 Wilayas (governorates). The curfew runs from midnight to 4 a.m. The concerned Wilayas include Algiers, Constantine, Oran, among others. Meanwhile, 39 other Wilayas are curfew-free.
May 20, 2021

EGYPT – S&P maintains B / B rating for Egypt with a stable outlook
Credit rating agency S&P has confirmed the sovereign rating of the Egyptian economy at the level of B / B in the long-term and short-term, with a stable outlook. According to S&P, the stabilization was due to Egypt’s economic and financial reforms and macroeconomic stability, which led to the accumulation of foreign exchange reserves and high growth rates in the two years before the COVID-19 pandemic.
May 9, 2021

MOROCCO – Moroccan customs record a 10% annual decline in revenue
Morocco’s customs revenue has witnessed a 10% annual decline in 2020. Moroccan customs authorities collected MAD 91 bn (EUR 8.5 bn) from import taxes. The figure is lower by MAD 9.7 bn (EUR 903 mn) compared to the number recorded in 2019. However, according to Morocco’s Customs and Indirect Taxes’ Administration, the results are relatively positive considering the “difficult” economic context.
May 11, 2021

TUNISIA – Tunisian economy shrinks by 3.0% in the first quarter of 2021
According to Tunisia’s National Statistics Institute (INS), the country’s economy has witnessed a negative growth of -3.0% in the first quarter of 2021, compared to the same period in 2020. Compared to the fourth quarter of 2020, however, Tunisia’s GDP has recorded a 0.1% growth. The agriculture sector witnessed the largest annual decline (-6.7%), followed by services (-6.0%), and manufacturing industries (-0.3%). On the other hand, the value of oil and gas extraction grew by 26.1%, non-manufacturing industries by 11.5%, and construction by 10.4%.
May 15, 2021 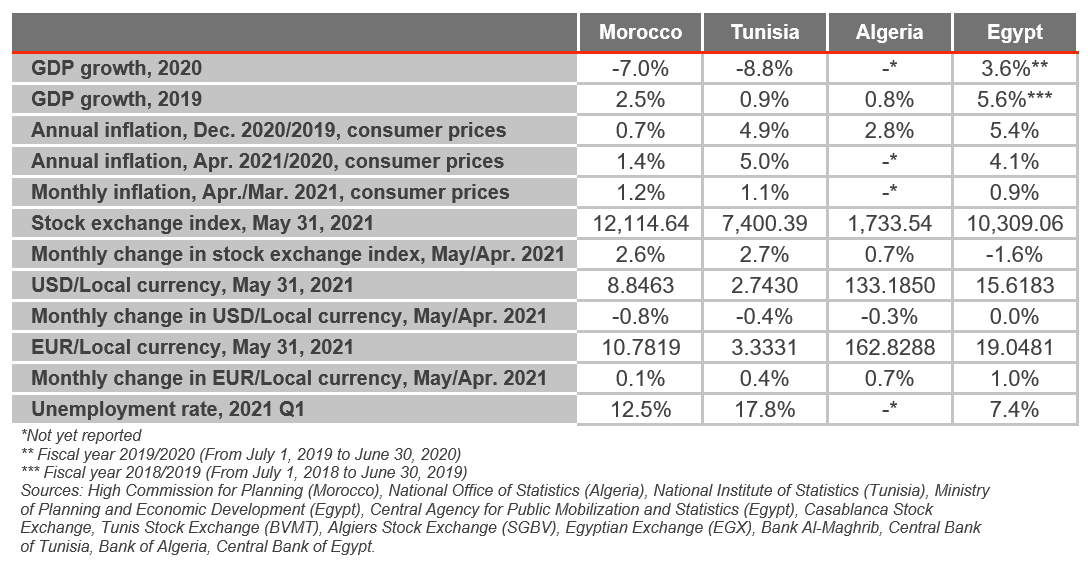