EGYPT – EgyptAir resumes direct flights to India after a two-year suspension
Egyptian national air carrier EgyptAir has announced the resumption of its direct flights to Mumbai, India, after a suspension of more than two years due to the COVID-19 pandemic. EgyptAir will operate four weekly flights between Cairo and Mumbai, two in each direction. The new flights are in line with EgyptAir’s plan to expand its offer in Asia.
May 2, 2022

EGYPT – Egypt launches operations in the world’s largest sugar production plant
The Canal Sugar Company, an Egyptian-Emirati partnership, has announced the launch of operations in its sugar production plant in the Minya Governorate in Upper Egypt. According to the company, the plant is the largest sugar factory in the world, with an initial production capacity of more than 900,000 tons per year. The factory required a global investment of over USD 1.0 bn and was born from a partnership between Emirati corporations Gamal Al Ghurair Group and Murban Energy Investment, and Egypt’s Al Ahly Capital Holding. The plant provided 1,500 new direct jobs.
May 10, 2022

MOROCCO – Automotive seating manufacturer Adient inaugurates its second factory in Morocco
American automotive seating manufacturer Adient has inaugurated its second factory in Morocco. The production unit is located in the Atlantic Free Zone, 50 kilometers north of Rabat. The project had an investment budget of MAD 72 mn (EUR 6.8 mn) and it covers an area of 25,000 square meters, including 10,000 square meters of indoor facilities. The factory currently employs 600 workers, but it intends to reach 1,300 employees by 2025. The company had opened its first Moroccan factory in the same industrial zone back in 2018.
May 11, 2022

MOROCCO – Morocco records a 77.3% annual increase in phosphate revenue in Q1-2022
The revenue of Morocco’s phosphate company OCP Group recorded an annual increase of 77.3% in the first quarter of 2022. It grew from MAD 14.2 bn (EUR 1.34 bn) in the first quarter of 2021 to MAD 25.3 bn (EUR 2.39 bn). Meanwhile, the gross margin of OCP Group witnessed an annual increase of 71.5%, standing at MAD 15.8 bn (EUR 1.49 bn). OCP Group explained that the record growth is thanks to the highly-increased demand for phosphate and fertilizers due to the Russia-Ukraine conflict, which brought the prices of phosphate products up. The corporation recorded such an increase in revenue despite a decline in the volume of sales.
May 17, 2022

MOROCCO – Packaging manufacturer Smurfit Kappa builds its first African factory in Morocco
Smurfit Kappa, a European paper packaging manufacturer, has launched the construction of its first African factory in Morocco. The company is investing EUR 35 mn in the project, which is expected to become operational in the first quarter of 2023. The production unit will have the capacity to produce between 80 and 150 million pieces of packaging for the industrial and agricultural sectors. The factory will be located in Ain Aouda, around 25 kilometers south of Rabat, and will have a global surface of 25,000 square meters. It is set to generate 300 direct and indirect jobs.
May 24, 2022

MOROCCO – India’s HCL Technologies signs an agreement to expand in Morocco
Indian IT outsourcing company HCL Technologies has signed an MoU with the Moroccan Agency for the Development of Investments and Exportations (AMDIE) to invest in Morocco. The Indian company intends to open a delivery center in the country that would offer IT services of high added value to its international clients. HCL Technologies also plans to launch training offers in various IT sectors for the local workforce.
May 29, 2022

TUNISIA – Germany’s Sartorius inaugurates a new production unit in Tunisia
German pharmaceutical and laboratory equipment manufacturer Sartorius has inaugurated a new production unit in the south of Tunis. The factory covers a surface of 10,000 square meters and required an investment of over EUR 20 mn. Sartorius has been present in Tunisia since 2011 and currently employs around 800 Tunisian workers.
May 20, 2022

ALGERIA – Air Algérie prepares to launch direct flights to and from Qatar
Algerian national air carrier Air Algérie is set to soon launch direct flights between Algiers and Doha, Qatar. The Algerian airline is also currently discussing the modalities to open an office in the Qatari capital. The exact date of the inaugural flight between Algiers and Doha is yet to be announced.
May 16, 2022

ALGERIA – Sonatrach partners up with two Chinese companies to produce MTBE in Algeria
Algeria’s national oil and gas company Sonatrach and Chinese companies CNTIC and LPEC have signed an agreement to build a production complex for methyl tertiary-butyl ether (MTBE), a chemical compound primarily used as a fuel additive for gasoline. The project will require an investment of USD 500 mn. The production unit will be built in the Arzew industrial zone, northwestern Algeria, and will have a production capacity of 200,000 tons per year. The project is set to become operational in 2025 and is expected to create 200 direct jobs and 3,500 indirect jobs.
May 19, 2022

ALGERIA – Sonatrach and China’s Sinopec sign a production sharing agreement
Algeria’s national oil and gas company Sonatrach has signed a production sharing agreement with China’s Sinopec Overseas Oil and Gas Limited relating to the Zarzaitine site, located in the east of the Algerian desert, near the border with Libya. According to the agreement, Sonatrach and Sinopec will work together on the development and exploitation of the site, notably through the drilling of 12 new wells, and the renovation of six existing wells, as well as the maintenance of the established infrastructure on the site. The agreement is worth around USD 490 mn and will allow the production of about 95 million oil barrels.
May 28, 2022

EGYPT – Sixteen Egyptian soldiers lose their lives in two terrorist attacks in eastern Egypt
Egypt has witnessed several confrontations between the military and terrorist groups in the first half of May. On May 7, a terrorist group attacked a water pumping station east of the Suez Canal. The confrontation with the Egyptian army following the attack resulted in the death of 11 Egyptian military personnel and the injury of five others, while the terrorist group lost nine members. A few days later, on May 11, a new confrontation in the desert of North Sinai resulted in the death of five Egyptian soldiers and seven terrorists. The two attacks were largely condemned by the international community.
May 11, 2022

EGYPT – Egypt launches a 10-billion-dollar industrial partnership with the UAE and Jordan
Egypt, the UAE, and Jordan have launched the “Industrial Partnership for Sustainable Economic Growth,” a project with a global budget of USD 10 bn, seeking to launch joint industrial projects in the three countries and create job opportunities. The new partnership will focus on five sectors of mutual interest: petrochemicals; metals, minerals, and downstream products; textiles; pharmaceuticals; and agriculture, food, and fertilizers. The initiative’s investment budget will be managed by Abu Dhabi-based investment and holding company ADQ.
May 29, 2022

MOROCCO – Moroccan authorities allow casinos to reopen after over two years of suspension
Moroccan authorities have allowed casinos to reopen after a suspension of more than two years due to the COVID-19 pandemic. Despite the reopening of bars and nightclubs in March 2022, casinos were still not allowed to reopen, until this new decision was announced. Morocco hosts seven legal casinos, including three in Agadir, two in Marrakech, one in Tangier, and one in El Jadida.
May 4, 2022

MOROCCO – Morocco and Portugal to establish a bilateral legal framework for professional migration
Morocco’s Ministry of Labor and its Portuguese counterpart have launched a multisectoral working group to establish a legal framework facilitating the migration of workers between the two countries. The group will include representatives from the Moroccan and Portuguese governments, as well as the official employment agencies of the two countries. The project seeks to put in place a legal framework that organizes the recruitment process of Moroccan workers by Portuguese companies and vice-versa, as well as protect the rights of both workers and businesses.
May 18, 2022

TUNISIA – Tunisian President fixes July 25 to hold a referendum on the amended constitution
Tunisian President Kais Saied has made it official to hold a referendum on the country’s amended constitution on July 25, 2022, despite accusations from the opposition that the decision is “non-democratic.” The date to hold the referendum was fixed in a presidential decree. It is set exactly one year after President Saied dismissed former Tunisian Prime Minister and suspended the Tunisian Parliament. The upcoming referendum has been widely criticized by opposition figures in the country, notably le Front de Salut National (National Salvation Front), a group of five political parties and several NGOs. The group has organized many demonstrations in the streets of Tunis to express its opposition to President Saied’s “unilateral” decisions.
May 26, 2022

EGYPT – Moody’s downgrades the outlook of Egypt’s rating from ‘stable’ to ‘negative’
Credit rating agency Moody’s has downgraded the outlook of Egypt’s long-term foreign and local-currency issuer ratings from “stable” to “negative,” while maintaining its rating of “B2.” Moody’s attributed the change in its outlook to the ongoing inflation in food prices, saying that the Egyptian government was unable to mitigate inflation and that it could cause “social tensions.”
May 26, 2022

MOROCCO – Fitch Ratings affirms Morocco at ‘BB+’ with a ‘stable’ outlook
Fitch Ratings has affirmed Morocco’s long-term foreign-currency issuer default rating at “BB+” with a “stable” outlook. The credit rating agency explained that, despite the expected decline in Morocco’s agricultural GDP due to drought, the country maintains the macroeconomic fundamentals that would help it overcome challenges. Fitch Ratings expects Morocco to record a GDP growth of only 1.1% in 2022 after the growth rate of 7.4% witnessed in 2021. The agency also forecasts Morocco’s inflation to average 4.7% in 2022, before dropping to 2.0% in 2023.
May 13, 2022

TUNISIA – Central Bank of Tunisia increases the key interest rate to 7%
The Central Bank of Tunisia has decided to increase the key interest rate by 75 basis points, from 6.25% to 7.00%. This translates to an increase in the deposit facility rate to 6.00% and the marginal lending facility rate to 8.00%. According to the central bank’s administration council, the decision aims to counter inflationary pressure and avoid the acceleration of inflation.
May 18, 2022

TUNISIA – AfDB forecasts a 2.5% GDP growth in Tunisia in 2022 and a 3.2% growth in 2023
The African Development Bank (AfDB) expects Tunisia’s GDP growth to stand at 2.5% in 2022 and reach 3.2% in 2023. The financial institutions presented the forecast during the AfDB Group’s Annual Meetings. According to AfDB, the ongoing Russian-Ukrainian conflict will have a negative impact on the entirety of the African economy and will slow down its growth, expected to stand at around 4.1% in both 2022 and 2023.
May 25, 2022

ALGERIA – IMF expects the Russian-Ukrainian crisis to contribute to Algeria’s GDP growth
The International Monetary Fund (IMF) has predicted that the global energy crisis due to the Russian-Ukrainian conflict will have a positive impact on the Algerian economy and will allow it to maintain its leading position in the Maghreb. The financial institution expects Algeria’s GDP to reach USD 193.6 bn in 2022, marking an annual growth of 2.4%. The figure would make Algeria the largest economy in the Maghreb region and the fourth in Africa.
May 14, 2022 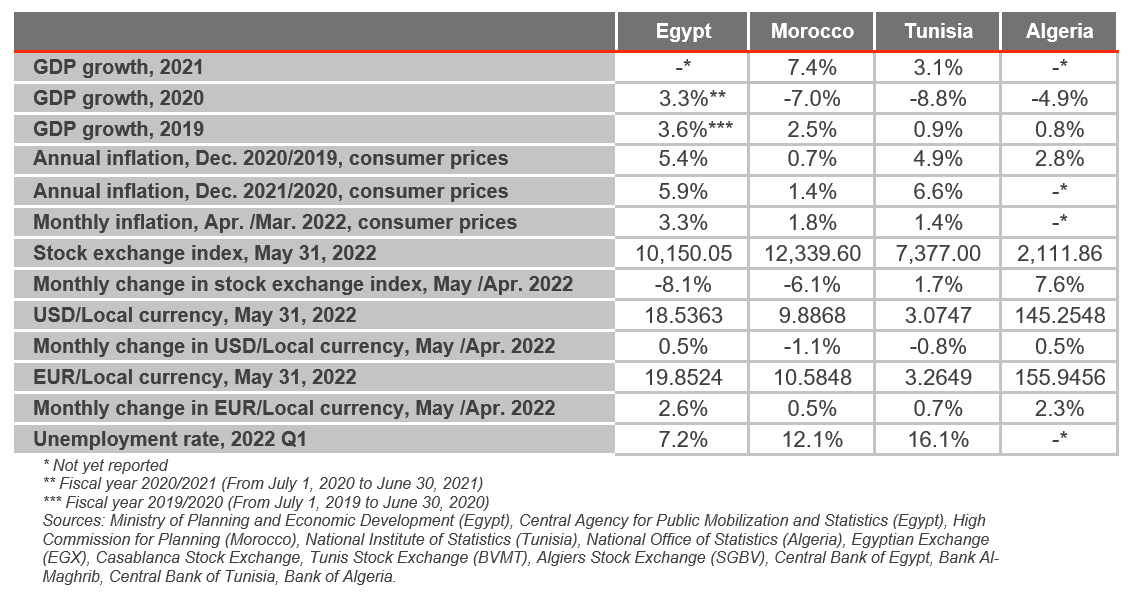