MOROCCO – Aston Martin to Open its First North Africa Dealership in Casablanca
Aston Martin has announced that Global British Motors, under the holding company Bugshan Maroc, has been appointed as its official dealer in Morocco and will open a 400m² showroom in Casablanca in the second quarter of 2020. Aston Martin is continuing to strengthen its presence across the Middle East and North Africa and is now present in 14 countries in the region.
February 7, 2020

MOROCCO – Morocco Opens ‘Japan Desk’ to Support Japanese Investors
Morocco’s Minister of Industry, Loulay Hafid Elalamy, and Japan’s Parliamentary Vice-Minister for Foreign Affairs, Shinichi Nakatani, have agreed to create a “Japan Desk” within the Moroccan Agency for Investment and Export Development (AMDIE). The desk aims to support Japanese investment in Morocco. “This desk will help with receiving all complaints, expectations, and requests for information from Japanese investors,” the Moroccan minister stated. At least 71 Japanese companies currently operate in Morocco, employing over 40,000 people.
February 18, 2020

MOROCCO – American Tax and Legal Firm Andersen Launches Operations in Morocco
Andersen Global, which offers tax, financial and legal advice, has launched operations in North Africa after entering a partnership with Morocco-based advisory firm M.A. Global Consulting. Andersen Global Chairman Mark Vorsatz said that the Moroccan market presents growth opportunities for the firm. “This collaboration is another key link in the expansion of our organization in Africa and addresses an important market that positions us for continued growth opportunities,” he said.
February 20, 2020

MOROCCO –  EBRD Loans USD 16 mn to Varroc Morocco to Boost Automotive Sector
Lighting systems manufacturer Varroc Lighting Systems Morocco is the Moroccan subsidiary of India’s Varroc company. The European Bank for Reconstruction and Development (EBRD)’s loan will allow Varroc to supply the Tangier Renault factory and the Peugeot PSA plant in Kenitra, as well as other companies such as Volkswagen and SEAT. The project also includes the establishment of an engineering center and laboratories.
February 24, 2020

TUNISIA – Nawara Gas Field Now Operational
Former prime minister Youssef Chahed announced on February 5 that operations had begun at the Nawara gas field in the Ghannouch industrial district near the city of Gabes. Nawara is the largest gas project in Tunisia, with an investment of USD 1.27 bn, primarily financed by the European Investment Bank and the African Development Bank. The project is a joint venture between the Tunisian Company of Petroleum Activities (ETAP) and the Austrian oil and gas company OMV. It has a production capacity of 2.7 million cubic meters of gas, 7,000 barrels of oil, and 3,200 barrels of liquid gas per day. Production by the Nawara gas field is expected to reduce the country’s energy deficit by 20% and the trade deficit by 7%.
February 5, 2020

TUNISIA – German Company Draxlmaier to Open a Fifth Plant
Draxlmaier, a German automotive component supplier that specializes in electric systems, has begun the construction of a new plant in the Jammel (Monastir) industrial zone. The factory is valued at USD 39 mn and will create up to 3,000 jobs. Draxlmaier’s four other plants employ 8,000 people.
February 7, 2020

TUNISIA – Panoro Announces Additional Well in Tunisia
Norwegian company Panoro Energy and its joint venture partner ETAP, have announced the approval for the drilling of a production well on the Guebiba onshore field. Drilling is expected to commence in May.
February 18, 2020

ALGERIA – Peugeot-Citroen Factory to Begin Operations in June 2020
French car manufacturer PSA Group has announced in a press release that its vehicle assembly factory in Tafraoui should be operational by June 2020. The factory will have an initial production capacity of 50,000 vehicles per year, increasing to 75,000. Initially valued at USD 43 mn, the factory will be extended to include an additional assembly and painting unit, bringing the total investment to USD 131 mn.
February 16, 2020

ALGERIA – Algeria Inaugurates Upgrade to Oil Refinery Production Unit
The Algerian prime minister has inaugurated an upgrade to the Sidi Rezine oil refinery in Algiers, after modernization works on the production unit that have lifted the plant’s annual output from 2.7 million tonnes to 3.645 million tonnes. China Petrol Engineering and Construction (CPECC) carried out the upgrade under a contract signed with the state-owned oil company Sonatrach in 2016. Algeria aims to start exporting gasoline next year and diesel in 2024 after upgrades to its refineries, said the Sidi Rezine plant manager Hassen Boukhalfa. In February, the Algerian prime minister also inaugurated two gas tankers and a petrol tanker purchased by a subsidiary of Sonatrach.
February 24, 2020

ALGERIA – Renault Factory Closes Until Further Notice
The Renault production site in Oran has closed doors until further notice.  The decision was made due to ongoing delays with the importation of knock-down and semi-knock-down kits. The factory has not produced any vehicles since December, while it waits for government authorization to import the kits under a new quota system.  The closure could last up to 60 days, while the government prepares the authorization and new scope documents for the kit import. Renault has offered to reimburse its clients for orders that the factory has failed to deliver.
February 26, 2020

MOROCCO – Morocco and Turkey to Review Free Trade Agreement
Morocco and Turkey are currently reviewing a list of Moroccan complaints relating to the free trade agreement between the countries. Morocco considers the free trade deal it struck with Turkey in 2004 as responsible for part of its USD 1.2 bn trade deficit with the country. The dispute mainly concerns the textile industry, with the Minister noting that Morocco lost 44,000 jobs in the sector in 2017 due to textile factories closing down. He indicated that the volume of Turkish investments in Morocco did not exceed one percent.
February 12, 2020

TUNISIA – Tunisia’s Parliament Approves a Coalition Government
Tunisia’s parliament has approved a new coalition government in a confidence vote. Elyes Fakhfakh, who was designated prime minister last month by President Kais Saied, has brought parties from across the political spectrum into his cabinet, although many have struggled to reconcile policy differences. The country’s last election, held in October, produced a deeply fragmented house in which no party won more than a quarter of the seats.
February 27, 2020

ALGERIA – Algerian Protest Movement Marks First Anniversary
On February 21, thousands of people gathered in Algiers to mark one year of protests against the government. Police were deployed across the city, blocking protesters who still demand that the ruling elite steps down. The metro was closed and all trains to the capital were cancelled, apparently in a move to keep the number of protestors down. According to Human Rights Watch, at least 173 protestors are in jail, facing charges stemming from their activism. “Algerian authorities are still resorting to their old repressive tactics, deepening the rift between rulers and people that is at the very heart of the uprising,” said Eric Goldstein, acting Middle East and North Africa director at Human Rights Watch.
February 21, 2020

MOROCCO – IMF Visits Morocco to Discuss Dirham Float Process Strategy
The managing director of the International Monetary Fund (IMF) Kristalina Georgieva made an official to Morocco between 17 and 20 February, to discuss Morocco’s strategy towards a flexible exchange rate. On 15 January 2018, Morocco widened the dirham’s trading band against hard currencies to 2.5% either side of a reference price. Previously, the dirham was pegged at 40% to the US dollar and 60% of the euro. Morocco is ready to press ahead with its “sovereign and gradual approach” to dirham flexibility, Finance Minister Mohamed Benchaaboun announced in a press conference. “It is for Bank al-Maghrib [Morocco’s central bank] and the Finance Ministry to fix the date of the second phase,” he added. The IMF will return to Morocco during March to discuss the strategy. Morocco’s economic growth is projected to rise from 2.4% in 2019 to 3.7% 2020 and 4% in 2021, according to the IMF.
February 20, 2020

TUNISIA – Moody’s Changes Tunisia’s Outlook to Stable From Negative, Affirms B2 Rating
Moody’s Investors Service has changed the Government of Tunisia’s issuer rating outlook to stable from negative, and affirmed a rating at B2. Moody’s has also changed the outlook on the Central Bank of Tunisia’s ratings to stable from negative. Moody’s stated in a press release that the affirmation of the B2 rating “reflects an external vulnerability risk that remains elevated in light of large external financing needs, and a high debt burden still vulnerable to potential currency and financing shocks. It also takes into account the relative strength of Tunisia’s institutions and governance and the potential for the economy to return to stronger growth rates, given a diversified economic base and educated labor force.”
February 14, 2020

TUNISIA – Unemployment Rate Drops in Fourth Quarter of 2019
According to figures released by the National Institute of Statistics (INS), Tunisia’s unemployment rate dropped in the fourth quarter of 2019 to 14.9%, compared to 15.1% in the third quarter of the year. 27.8% of university degree holders were unemployed in quarter four, down from 28.6% in quarter three. 33.8% of people aged 15 to 24 years were unemployed. According to the INS figures, 52.1% of those employed were employed in the services sector, 18.5% in the manufacturing sector, and 13.8% in agriculture.
February 15, 2020 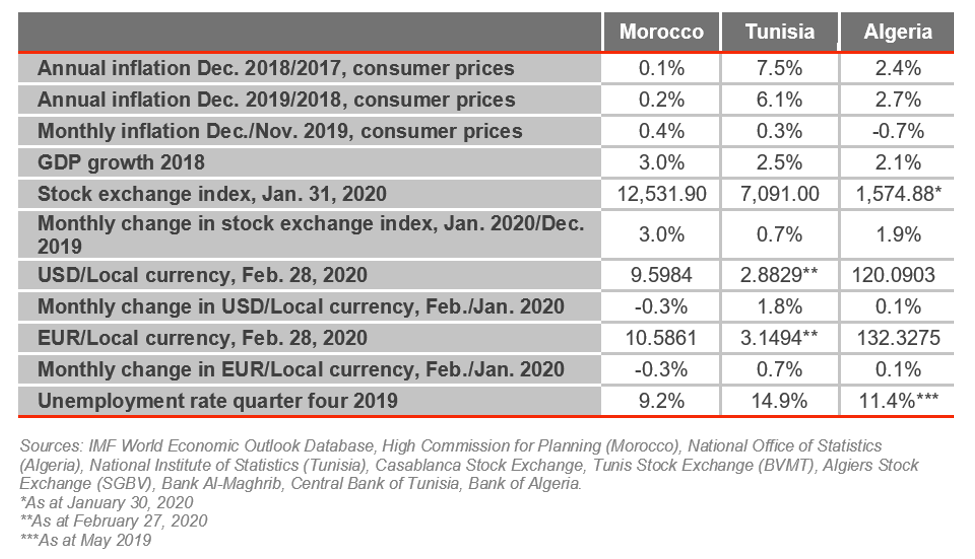