You are here: Home / Newsletter / North Africa News May 2020

MOROCCO – Chariot Oil & Gas Shifts Focus to Gas Development
The UK-based company Chariot Oil & Gas is refocusing its strategy away from oil frontier exploration and towards gas developments through the delivery of the Anchois gas project off Morocco’s northern Atlantic coast. The refocus is in response to changing market dynamics, in particular current market uncertainty related to COVID-19 and commodity price weakness, the company announced in a press release. The Anchois gas discovery project has a total remaining recoverable resource of 423 Bcf, as assessed by Netherland Sewell & Associates Inc., the company added.
April 9, 2020

MOROCCO – Renault Maroc and PSA Group Slowly Resume Operations
French car manufacturer Renault Maroc has announced it would partially resume its industrial activity. Renault Maroc announced in a press release that it is preparing its two plants in Tangier and Casablanca “to adapt and adjust production as the market recovers to meet the demand both in Morocco and abroad.” The company will resume activities according to specific schedules for each site and plans to start fully operating in May. Renault Maroc suspended its activities on March 19. Although affected by the lockdown, Renault has been paying out monthly wages to its 12,000 employees. PSA Group will also resume operations from May 6 at its Kenitra plant, resuming the production of the Peugeot 208 and Citroen Ami.
April 17, 2020

TUNISIA – CEED Tunisia Launches an Entrepreneur Networking Platform
The Tunisian branch of the international entrepreneur network CEED Global has launched CEED NETWORK, an online networking platform for entrepreneurs in Tunisia. CEED Tunisia currently has a network of over 900 entrepreneurs and the new platform is designed to connect them with suppliers, customers and partners.
April 21, 2020

TUNISIA – Direct Maritime Trade Line Opens Between Sfax and Tripoli
The International Fruit Group (GIFruits) has opened a new maritime line between the port of Sfax and the Libyan port of Tripoli, in partnership with the maritime transport company TunShip. A 15-16 tonne regular container costs USD 1525, and a 15-16 tonne refrigerated container costs USD 3350. In 2019, Tunisia exported 80% of its fruit to Libya.
April 26, 2020

ALGERIA – Volkswagen Initiates Termination Procedures for its Distribution Contract with Sovac
The German group Volkswagen has initiated termination procedures with its Algerian manufacturing and distribution partner Sovac Production. Volkswagen suspended operations at the Algerian plant in December citing the political crisis. Several hundred vehicle assembly kits intended for the Sovac plant have been held up at the border, awaiting quota allocations from the Algerian government. Termination of the Volkswagen-Sovac contract is set for March 2021, giving Sovac the time to meet the needs of customers in relation to after-sales services. It also allows for the contract to potentially resume if the political situation stabilizes.
April 8, 2020

ALGERIA – Sonatrach Signs MoU with Turkey’s TPAO and Russia’s Zarubezhneft
The Algerian National Hydrocarbon Company Sonatrach has signed Memorandas of Understanding with the Russian company Zarubezhneft and the Turkish company Turkiye Petrolleri Anonim Ortakligi (TPAO) for the exploitation of hydrocarbons in Algeria. Sonatrach stated in a press release that the agreements confirmed “the renewed dynamism of the Algerian mining sector, within the framework of the new provisions introduced by the law on hydrocarbon activities.”
April 16, 2020

MOROCCO – Morocco Extends Full Lockdown to at Least May 20
Moroccan authorities have extended the full country lockdown until at least May 20. The country has been in lockdown since March 20. Lockdown measures mean people are only allowed to go out to buy food or medicine, and to perform key jobs. Facemasks must be worn at all times. Schools, mosques, non-essential shops and all entertainment venues have been closed, and all interstate travel is banned. Overseas flights have also been suspended until at least May 31. As at May 4, there have been 174 recorded COVID-19 deaths and 4,903 confirmed cases in Morocco.
May 4, 2020

TUNISIA – Tunisia Extends State of Emergency for Another Month
Tunisian president Kais Saied has extended Tunisia’s state of emergency for an additional 30 days starting from April 30. This follows an attack near the US embassy in March that killed a police officer. The Tunisian state of emergency gives authorities exceptional powers, including carrying out home arrests, banning official meetings, imposing curfews, monitoring media and press, prohibiting assemblies, and media censorship. The state of emergency in Tunisia has been ongoing throughout the country since 24 November 2015. It was first declared following a deadly bomb attack on a bus of presidential guards.
April 29, 2020

TUNISIA – Tunisia to Gradually Ease Lockdown Measures
Tunisia will start relaxing its COVID lockdown, reopening parts of the food and construction sectors, partially reopening public transport and allowing half of government employees to return to work from May 4. Further easing from May 11 will include the opening of clothing shops and malls. As at May 4, Tunisia had 1,013 confirmed cases of COVID-19 and 42 deaths.
May 4, 2020

ALGERIA – Algeria Passes Controversial Anti Fake-News Law
Algerian has passed a law criminalizing the broadcast of “fake news” deemed harmful to “public order and state security”. The law has been strongly opposed by protesters and rights activists. The law comes amid increasing repression of opposition and media during recent months. Reporters Without Borders’ North Africa Director Souhaieb Khayati warned that the new laws were just another instrument the government could use to “muzzle the press.” Algerian League for the Defense of Human Rights Vice President Said Sahli echoed this, stating that the new laws were just “another turn of the screw against freedoms.” Massive protests against the ruling political elite have been ongoing since February 2019, although street rallies were voluntarily suspended last month in a bid to prevent the spread of COVID-19.
April 23, 2020

Algeria had eased its curfew measures on April 24 in some regions, shortening the night curfews and lifting the full lockdown for Blida, a province near the capital Algiers. Some businesses across the country had been allowed to reopen, including hair salons, clothes shops, cosmetics, kitchenwares and more. However, following an increase in the number of new COVID-19 infections, the president has ordered the closure of these businesses. Educational facilities will also remain closed until at least May 14. As at May 4, there have been 463 recorded COVID-19-related deaths in Algeria and 4,474 confirmed cases.
May 4, 2020

MOROCCO – Morocco Introduces Measures to Support Businesses During COVID
Morocco has introduced a number of measures to support businesses and workers during the COVID-19 crisis. First, a number of deadlines for tax obligations have been extended. Tax declarations by small and medium-size businesses have been delayed until June 30, 2020 (noting however that value-added tax (VAT) declarations cannot be deferred). Large companies affected by the pandemic may also apply to the tax office for a tax payment deferral. Tax audits and notices to third party holders have also been suspended until June 30, 2020. In terms of supporting workers, Moroccan national security (the CNSS) is paying out monthly allowances to formal sector employees, and monthly payments have also been made available for non-formal sector employees (up to USD 121 per month).
April 1, 2020

MOROCCO – EIB Lends USD 480 mn to Morocco’s Private Sector
The European Investment Bank Group (EIB) has announced the provision of USD 480 mn to the private sector in Morocco through its credit lines with Moroccan financial institutions. “These credit lines that are dedicated to financing the private sector will be able to provide working capital and liquidity necessary for businesses to continue their activity,” the EIB said in a press release. In addition to the immediate cash assistance, the EIB has decided to accelerate the disbursement of loans that have already been signed to support small and medium-sized enterprises.
April 8, 2020

MOROCCO – HCP Announces 6.8% Economic Contraction in Quarter 2
The High Commissioner for Planning (HCP) has revised its growth forecast for Q2 to -6.8%, down from the 2.1% predicted pre COVID-19. Because of confinement restrictions brought about by the pandemic, HCP has predicted an 8.4% drop in imports and a 6.1% drop in exports in Q2. The agency has also predicted that overall, the COVID-19 crisis would cost the Moroccan economy USD 3 bn in the first half of 2020. On April 7, HCP had predicted the economy would lose USD 1.5 bn, but the agency then revised this figure based on the extension of the confinement period to at least May 20.
April 28, 2020

MOROCCO – Fitch Affirms Morocco’s BBB- Rating & Revises Outlook to Negative
Fitch Ratings has revised the outlook on Morocco’s long-term foreign currency issuer default rating to negative from stable and affirmed the rating at “BBB-“. According to Fitch, the negative outlook reflects the “severe hit to the Moroccan economy from the coronavirus pandemic shock, which will cause the sharpest GDP contraction in 25 years.” The collapse in exports, tourism and remittances will cause a doubling of the current account deficit to 8.3% of GDP in 2020 from 4.1% in 2019, Fitch stated. The ratings agency also predicts that disruptions to global value-chains and the air transport industry will also hurt the emerging automotive and aeronautics sectors (which account for the country’s largest share of exports, at 40% in 2019). While Fitch projects Morocco’s GDP to contract by 4.5% this year, it nonetheless forecasts a bounce-back in 2021, with a 6% GDP growth rate.
April 28, 2020

TUNISIA – IMF Grants USD 745 mn to Tunisia for COVID response
The International Monetary Fund has provided Tunisia with a USD 745 mn emergency loan. “These resources will help address urgent fiscal and balance of payments needs stemming from the outbreak of the COVID-19 pandemic in Tunisia,” the IMF said in a statement. The IMF added that it expects Tunisia’s economy to contract by 4.3% this year, the deepest recession since Tunisia’s independence in 1956.
April 10, 2020

TUNISIA – Moody’s Places Tunisia’s B2 Rating on Review for Downgrade
Moody’s has placed Tunisia’s B2 issuer ratings on review for downgrade, stating that the decision reflected “the acute tightening in global financing conditions that risks precipitating a sustained period of high financing risk.” The review period, which may extend beyond the usual three-month period, will focus on assessing the authorities’ capacity to manage the shocks arising from COVID-19. The Tunisian government has set up a COVID-19 response program of about USD 1 bn (2.7% of estimated 2020 GDP), which combined with a revenue shortfall, has driven Moody’s projected fiscal deficit to more than 5% of GDP in 2020 (up from 3.5% in 2019). Moody’s predicts that Tunisia’s debt ratio will increase towards 80% of GDP this year.
April 17, 2020

TUNISIA – Ministry of Finance Announces Business Support Measures
The Tunisian Ministry of Finance has announced a new support unit for businesses affected by COVID-19. The unit is made up of the Ministry of Social Affairs, the Central Bank of Tunisia, workers’ unions and banking associations, and has introduced tax-related support measures for businesses. Late loan repayment penalties will be suspended until at least June 20 and procedures for recovering value-added tax (VAT) will be simplified. Also, corporate tax debts can now be rescheduled for a period up to seven years.
April 17, 2020

ALGERIA – Algeria Introduces Four Tax Measures in Favor of Businesses
The Directorate General of Taxes (DGI) has announced a set of taxation measures to support companies financially impacted by the pandemic. DGI has stated that the subscription period for the annual results declaration (balance sheets and appendices) has been extended until June 30, 2020 and taxpayers who are in a difficult financial situation can request a payment schedule for their tax debts. The Professional Association of Banks and Financial Institutions has also announced that banks will now take measures relating to the postponement or the renewal of credits maturing from March 31 onwards. Banks will also consider the extension of deadlines for credit and payment deferrals, as well as the cancellation of late payment penalties due from March 31, 2020 onwards.
April 4, 2020

ALGERIA – Algeria Will Not Turn to External Debt Post COVID Says President
Algerian president Abdelmadjid Tebboune has announced that Algeria will not turn to external debt or money printing for its financial needs in the face of falling oil prices, but will rather “borrow from citizens.” “We will not go to the International Monetary Fund or the World Bank because indebtedness undermines national sovereignty,” Tebboune told Algerian press. The collapse in hydrocarbon prices is putting pressure on Algeria’s external accounts. Even before the COVID crisis, Algeria’s foreign exchange reserves had fallen to USD 62 bn at the end of 2019, from USD 180 bn in 2014.
May 1, 2020 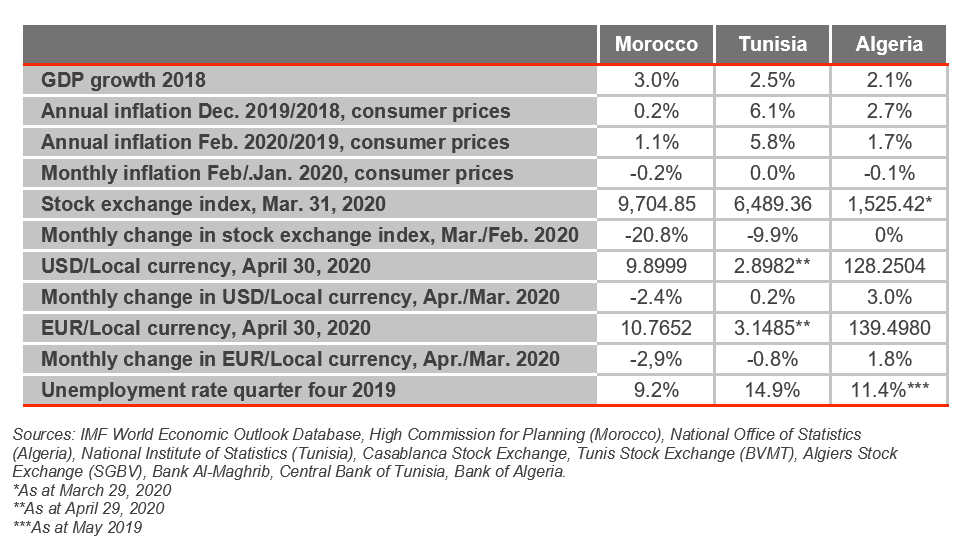