You are here: Home / Newsletter / North Africa News May 2022

EGYPT – EgyptAir resumes daily flights between Cairo and Moscow
Egyptian air carrier EgyptAir has resumed its daily flights between Cairo and Moscow. The flights have been suspended for several weeks due to the ongoing Russia-Ukraine conflict. The flights from Cairo to the Russian capital will depart at 9:30 a.m., Cairo time. Meanwhile, the flights from Moscow to Cairo will depart at 10 p.m. on the same day, Moscow time.
Apr. 15, 2022

EGYPT – Egyptian-French project to produce 350,000 tonnes of green fuel per year by 2026
The Egyptian Government and an Egyptian-French consortium have signed an MoU to establish a project for the production of green fuel in the Suez Canal Economic Zone. The project will require a global investment of USD 3.0 bn and is expected to produce up to 350,000 tonnes of ammonia per year. The facility is set to be established in 2024 and begin commercial operations in 2026. The partners working on the project include several Egyptian public companies, along with the French Green Fuel Alliance consisting of EDF Renewables and Zero Waste France.
Apr. 20, 2022

MOROCCO – WorleyParsons to conduct second phase studies on the Nigeria-Morocco pipeline project
Australian engineering group WorleyParsons has earned a USD 29.0 mn contract to conduct the second phase of studies about the Nigeria-Morocco gas pipeline project. WorleyParsons is set to handle the conceptual study through its Dutch subsidiary Intecsea, the study of the environmental and social impact through its London-based team, and the feasibility study through its subsidiary Advisian. The studies are fully financed by the Islamic Development Bank (IsDB).
Apr. 26, 2022

TUNISIA – Bulgarian batteries manufacturer Monbat acquires Tunisia’s Batteries Nour
Bulgarian lead-acid batteries manufacturer Monbat has acquired Tunisian company Batteries Nour by purchasing 60% of its shares. The remaining 40% of shares are held by Tunisian businessman Fethi Ghali. Through the acquisition, Monbat seeks to expand its activity into the MENA region and double the production capacity of Batteries Nour to one million batteries per year. As part of its expansion, Monbat will also build a new production unit specializing in lead recycling, with an investment of EUR 4.5 mn.
Apr. 7, 2022

ALGERIA – Algeria extends the deadline for corporate tax declarations
Algeria’s Directorate-General of Taxes (DGI) has announced the extension of the deadline for corporate fiscal declarations until May 31 for large corporations and June 30 for micro-sized, small, and medium businesses. According to the DGI, the decision seeks to facilitate the process for companies in Algeria, in light of the difficult sanitary condition that the country has witnessed in January 2022.
Apr. 17, 2022

ALGERIA – Emirates increases its weekly flights between Algiers and Dubai to four
Emirates has doubled the frequency of its flights between Algiers and Dubai from two flights per week to four weekly flights. According to the airline, the increased frequency comes in response to the growing demand on the Algiers-Dubai route. The new flights will operate on Saturdays and Sundays, adding up to the existing flights on Tuesdays and Thursdays. Emirates is operating a Boeing 777-300ER for its route between the UAE and Algeria.
May 1, 2022

EGYPT – Egypt announces India as its new main wheat supplier
The Egyptian Government has announced India as Egypt’s new wheat supplier, amid the ongoing Russia-Ukraine conflict. A delegation from the Egyptian Ministry of Agriculture has made an official visit to India to finalize import procedures. In early April, the Egyptian Prime Minister announced that his country’s wheat stock is sufficient for 2.6 months and that the government is studying different options to maintain a sufficient stock.
Apr. 15, 2022

MOROCCO – Morocco and Spain reopen their maritime borders after a two-year suspension
Morocco and Spain have decided to fully reopen their maritime borders and allow the transit of people and goods through the Gibraltar Strait, as well as between the Spanish enclaves of Ceuta and Melilla and Morocco’s northern cities. The borders have been closed since March 2020. While the borders have been initially closed due to the COVID-19 pandemic, their reopening was delayed due to the diplomatic crisis between Morocco and Spain. The decision to reopen the borders came during the visit of the Spanish Prime Minister to Rabat in order to restore his country’s positive relations with Morocco. During the visit, the two countries announced the full resumption of their partnership in multiple fields, including economic cooperation.
Apr. 7, 2022

ALGERIA – Algeria establishes a High Council for Energy
The Algerian President has issued a decree to create a High Council for Energy. The council’s mission is to develop a national energy policy that would improve Algeria’s energy security and upgrade the country’s energy production capacity in a sustainable way. The council is chaired by a representative from the Ministry of Energy and includes members from the various ministerial departments concerned.
Apr. 3, 2022

MOROCCO – IMF predicts Morocco to record a 1.1% GDP growth in 2022 and 4.6% in 2023
The IMF has predicted that the Moroccan economy will grow by 1.1% in 2022 and 4.6% in 2023. The financial institution has also expected Morocco’s inflation rate to reach 4.4% in 2022, before dropping to 2.3% in 2023. The IMF’s predictions are based on three assumptions: The Russia-Ukraine conflict will not extend beyond Ukraine, the sanctions pronounced against Russia will not concern the energy sector, and the repercussions of the COVID-19 pandemic will fade in 2022.
Apr. 19, 2022

MOROCCO – Morocco increases the national minimum wage and amends the labor law
The Moroccan Government and Morocco’s labor unions and employers’ association CGEM signed on the eve of Labor’s Day a social pact to make a series of amendments to the country’s labor law. One of the main conclusions of the agreement is the increase of the national monthly minimum wage in the public sector from MAD 2,638 (EUR 250) to MAD 3,500 (EUR 332). The agreement also provides for a 15-day paid paternity leave for public sector employees. For the private sector, the national monthly minimum wage is set to increase by 10% over two years: 5% in September 2022 and 5% in September 2023. It is expected to go from MAD 2,638 to over MAD 3,000 (EUR 285). Other amendments also include the possibility for employees to benefit from retirement pension after only 1,320 days of social security contributions instead of 3,240 days, as well as an increase in family allocations given to employees with more than three children.
Apr. 30, 2022

TUNISIA – Tunisian Government announces 50 ‘urgent’ measures for economic recovery
The Tunisian Government has announced a series of 50 “urgent” measures for economic recovery. The measures are divided into four axes: Supporting the treasury and access to financing, attracting investment, making the business environment more friendly, and promoting exportation by simplifying its procedures. The measures mainly include amendments to Tunisian legal texts in the hopes of reinvigorating the Tunisian economy after the COVID-19 pandemic.
Apr. 1, 2022

ALGERIA – Algeria’s hydrocarbon records a 3.1% annual growth in 2021
Algeria’s hydrocarbon sector has witnessed a 3.1% annual growth in 2021, according to the Algerian National Statistics Office (ONS). The increased revenue of the Algerian hydrocarbon sector comes after an 8.2% drop in the previous year due to the COVID-19 pandemic. The subsector of crude oil and unprocessed natural gas began its recovery in the second quarter of 2021, recording quarterly increases of 3.1% (Q2), 4.5% (Q3), and 8.4% (Q4). Liquefied natural gas also recorded significant growth, averaging 11.4% over the entire year. The only subsector that recorded a decline in growth was refined oil, with an annual decrease of 0.5%.
Apr. 20, 2022 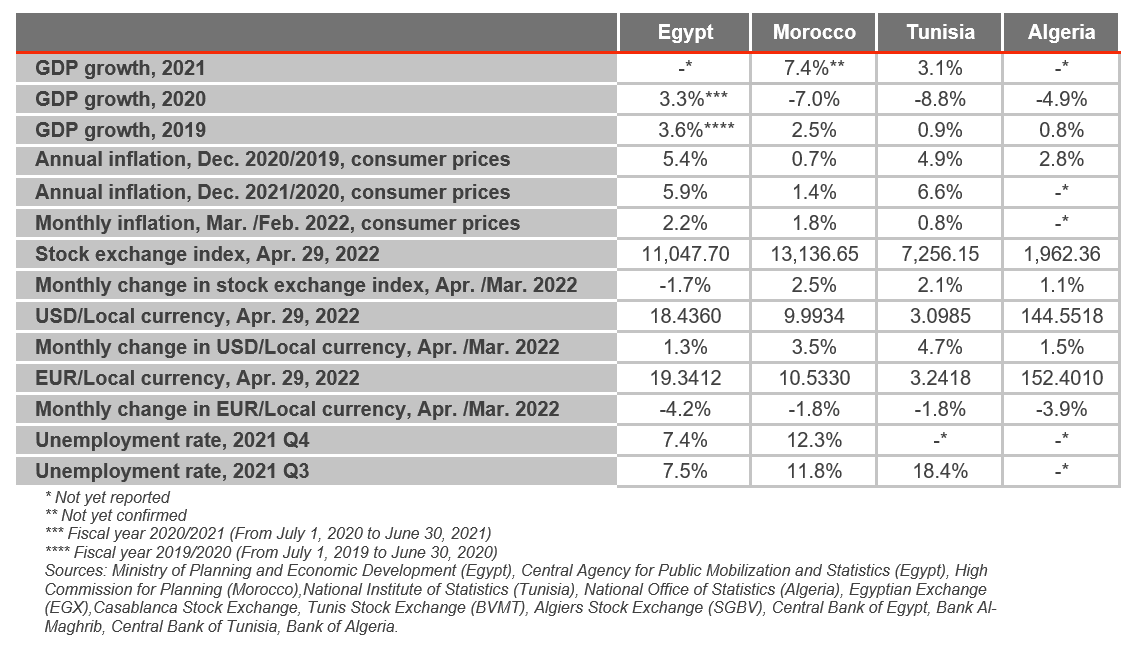