MOROCCO – Luxembourg opens Trade and Investment Office in Casablanca
Luxembourg has opened a Trade and Investment Office (LTIO) in Casablanca. The office is the ninth of its kind in the world in the first in Africa. It will serve Luxembourg companies wishing to invest in Morocco. The office aims to identify investment opportunities in Africa. Moroccan investors wishing to expand in Luxembourg can also benefit from the office’s services.
Oct. 7, 2020

MOROCCO – Moroccan government approves amendment to Free Trade Agreement with Turkey
The Moroccan government has approved an amendment to the Free Trade Agreement (FTA) between Morocco and Turkey. The amended agreement imposes new customs duties on certain Turkish products. It also increases the import tax on Turkish textile and clothing products from 27% to 36%. According to Moroccan authorities, the amendment aims to make trade between Morocco and Turkey more balanced.
Oct. 14, 2020

MOROCCO – French manufacturing company Alstom opens new factory in Fez
French company Alstom has inaugurated a new production unit in the Moroccan city of Fez. The factory will manufacture and assemble electric cables and distribution boards. Built over an area of 3.4 hectares, the factory required an investment of MAD 48 mn (EUR 4.42 mn). It currently employs 400 people but aims to create 350 additional jobs by 2023.
Oct. 14, 2020

MOROCCO – Hilton to build a new luxurious hotel in Morocco
International hotel chain Hilton has announced it will invest in a new luxurious hotel in Morocco, under its brand Conrad Hotels & Resorts. The hotel will be built in the coastal town of Arzana, near the Moroccan capital Rabat. The new property will be called “Conrad Rabat Arzana.” The tourist establishment is expected to open in 2021.
Oct. 15, 2020

MOROCCO – French tourism operator Club Med to build a 350-room resort in Morocco
French travel and tourism operator Club Med has announced plans to build a 350-room resort in Essaouira, on Morocco’s Atlantic coast. The project is part of a Memorandum of Understanding between Club Med, the Moroccan Ministry of Tourism, and the National Tourism Office (ONMT). The agreement covers two other renovation projects of tourism resorts in Tetouan, northern Morocco, and Marrakech. The three projects have a budget of MAD 1.3 bn (EUR 119.6 mn) and are expected to create 600 jobs.
Oct. 19, 2020

TUNISIA – United Kingdom allocates GBP 2 bn to finance investments in Tunisia
UK Export Finance, the British export credit agency, has allocated GBP 2 bn (EUR 2.22 bn) to finance investments in Tunisia. The British organization announced the decision during the Tunisian-British Bilateral Forum. The budget will benefit British companies wishing to invest in Tunisia, as well as Tunisian businesses wanting to expand in Africa. The Tunisian-British Chamber of Commerce will assist investors who want to benefit from the financing.
Oct. 22, 2020

ALGERIA – Fifty companies participate in Algerian-Spanish Business Forum
About 50 companies and organizations have taken part in the Algerian-Spanish Business Forum in Algiers. The Spanish delegation included 15 large companies in the sectors of energy, automotive industry, food industry, and construction. Meanwhile, the Algerian side included more than 30 public and private companies. The forum allowed Algerian and Spanish businesses to hold B2B meetings and establish new partnerships.
Oct. 8, 2020

ALGERIA – Algeria suspends import of cars less than three years old
The Algerian government has suspended the import of cars that are less than three years old. The move aims to encourage the local automotive industry. The suspension, however, is not permanent, the Algerian Minister of Industry announced. “It is likely to allow such imports in the mid-term after the implementation of various financial and economic reforms,” he said.
Oct. 11, 2020

MOROCCO – Morocco extends state of health emergency until November 10
The Moroccan government has extended the country’s state of health emergency until November 10. The state of emergency represents a legal framework that allows Moroccan authorities to promptly take exceptional measures to curb the spread of COVID-19 in the country, such as lockdowns on neighborhoods and cities, and travel bans. This is the seventh time that Morocco extends the state of emergency since it was first implemented in March.
Oct. 8, 2020

MOROCCO – France pledges to assist Morocco’s digital and green transitions
The French Minister of Trade has promised that his country will assist Morocco’s efforts towards the decarbonization of the economy and digital transformation. The French official made the statement during a meeting with Morocco’s Minister of Industry and Trade in Rabat. The two officials agreed to further deepen Morocco-France economic relations, especially in the fields of digital technology, innovation, and the development of small and mid-sized enterprises. The two officials also pledged to launch cooperation projects in Africa.
Oct. 13, 2020

TUNISIA – Tunisia reopens Ras Jedir border crossing with Libya
Tunisian Prime Minister Hichem Mechichi has authorized the reopening of the Tunisian-Libyan crossing point in Ras Jedir. The decision aims to allow the resumption of commercial and civil trade between Tunisia and Libya. Mechichi, however, insisted that the reopening operation should follow a strict health protocol to avoid the spread of COVID-19.
Oct. 23, 2020

ALGERIA – Algeria reopens all domestic airports
Algerian President Abdelmadjid Tebboune has ordered the reopening of all the domestic airports that were closed due to COVID-19. The Algerian president also announced the creation of special companies to manage domestic air transport. The decision aims to “create an economic dynamic and mitigate unemployment.” As for Algeria’s national air carrier, Air Algérie, President Tebboune announced it will undergo restructuring to become more competitive on the international level.
Oct. 4, 2020

ALGERIA – Hungary allocates EUR 150 mn to finance projects with Algeria
Hungary has allocated EUR 150 mn to finance Hungarian-Algerian projects in the fields of energy and agricultural technology. The Hungarian Minister of Foreign Affairs made the announcement during an official visit to Algiers. He also expressed his country’s wish to improve economic cooperation with Algeria. During a meeting with the Algerian Minister of Foreign Affairs, the Hungarian official promised to work towards bilateral agreements that would encourage Hungarian companies to invest in Algeria.
Oct. 27, 2020

MOROCCO – Morocco transfers MAD 15 bn from the state budget to Mohammed VI Investment Fund
King Mohammed VI of Morocco has ordered the injection of MAD 15 bn (EUR 1.38 bn) from the state budget to the recently-created Mohammed VI Investment Fund. The fund seeks to boost investment and revive the Moroccan economy after the COVID-19 pandemic. It will have a total budget of MAD 120 bn (EUR 11.04 bn). The budget includes MAD 45 bn (EUR 4.14 bn) for investments in major projects and MAD 75 bn (EUR 6.9 bn) for facilitating access to business financing.
Oct. 9, 2020

TUNISIA – Tunisia’s agricultural and food exports grow by 10.5%
Tunisian agricultural and food exports have witnessed a 10.5% annual growth, as of August 2020. The exports reached a value of TND 339 mn (EUR 105.09 mn), the National Observatory of Agriculture (ONAGRI) announced. Olive oil exports increased the most (+71.3%), followed by vegetables (+2.5%). Meanwhile, seafood and date exports recorded significant declines, at 22.0% and 7.8% respectively.
Oct. 1, 2020

TUNISIA – World Bank forecasts 9.2% recession in Tunisia in 2020
The World Bank has updated its forecasts for the Tunisian economy in 2020 and now expects a 9.2% recession. In July, the financial institution made an initial forecast that Tunisia’s economic growth will only decline by 4.0%. In 2021, the World Bank expects the Tunisian economy to grow by 6.0%, before returning to a moderate pace and grow by 2.0% in 2022.
Oct. 19, 2020 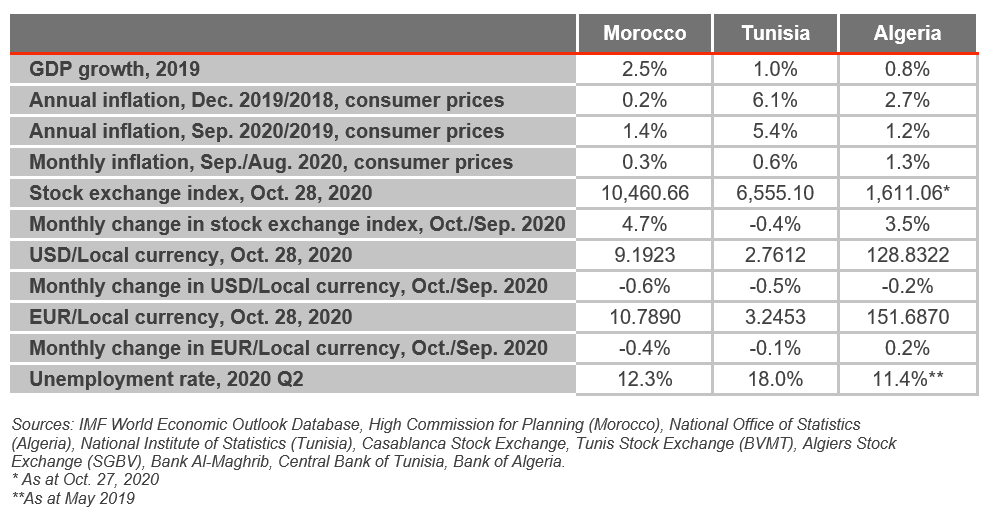