EGYPT – Indian car rental company Zoomcar expands into Egypt
Zoomcar, a car rental company based in India, has announced the expansion of its business into Egypt. Zoomcar offers a platform for renting cars upon request, either by the hour, day, week, or month. According to the company’s management, the expansion to Egypt is due to the country’s “low rates of car owners and growing number of people who want to move around freely and at affordable prices.”
Oct. 3, 2021

EGYPT – Egyptian-French-Japanese consortium to build a 500 MW wind farm in Egypt
The Egyptian government has signed two agreements with a consortium comprising Egyptian construction company Orascom, French energy company ENGIE, and the Japanese Toyota Tsusho Corporation to build a 500 megawatts (MW) wind farm in the Gulf of Suez area, northeastern Egypt. The project has an estimated total cost of USD 600 mn and is expected to become operational in 2024. It is expected to provide 1,100 direct jobs, in addition to several hundreds of indirect jobs related to supplies and services.
Oct. 14, 2021

MOROCCO – Moroccan and Israeli airlines sign an agreement to prepare for the launch of a direct route
Morocco’s national air carrier Royal Air Maroc and Israeli airline El Al have signed a memorandum of understanding to increase their cooperation. The agreement will allow the planes of both airlines to operate in their counterpart’s hubs, namely the Mohammed V Airport in Casablanca and the Ben Gurion Airport in Tel Aviv. The agreement comes in preparation for the launch of a regular direct air route between Casablanca and Tel Aviv. The two airlines are also discussing the possibility of signing a codeshare agreement.
Oct. 11, 2021

MOROCCO – Equatorial Coca-Cola Bottling Company moves its headquarters from Spain to Morocco
The Equatorial Coca-Cola Bottling Company has moved its headquarters from Barcelona, Spain, to Casablanca. The Spanish company is the main partner of the Coca-Cola Company in Africa. It operates in 13 countries in North and West Africa and employs more than 3,500 people. According to the company’s management, the decision to move the headquarters to Morocco seeks to make it “closer” to the African communities.
Oct. 27, 2021

MOROCCO – Morocco suspends importation taxes on wheat starting November
The Moroccan Ministry of Agriculture has decided to suspend importation taxes on wheat, starting November 1, in order to guarantee the stability of its prices on the national market. The Agriculture Ministry also announced a compensation mechanism for importing soft wheat in order to maintain low flour prices in the country.
Oct. 27, 2021

TUNISIA – French manufacturer Vernicolor opens a new production site in Tunisia
French company Vernicolor, specialized in manufacturing painted and chromed plastic interior decoration parts for cars, has launched a new production site in Tunisia. The project, located at the El Fejja Industrial Park, 20 kilometers west of Tunis, has cost an investment of EUR 9.5 mn. The factory extends over a total area of 20,000 square meters, including 10,000 square meters of covered surface. It currently employs 350 people and is expected to create a total of 800 jobs in the medium term.
Oct. 8, 2021

ALGERIA – British Airways to resume flights with Algeria in November
British Airways has announced the resumption of its flights to and from Algeria, starting November 14, after an 18-month suspension due to the COVID-19 pandemic. The airline will operate two weekly flights, on Thursdays and Sundays, between the London Heathrow Airport and the Algiers International Airport. British Airways will operate the flights using Airbus A320 aircraft with a capacity of 180 passengers.
Oct. 27, 2021

EGYPT – United Kingdom recognizes Egyptian vaccination certificates
The United Kingdom has begun recognizing Egyptian vaccination certificates. The decision came after Egypt was removed from the UK’s “red list” of countries heavily impacted by COVID-19. Fully-vaccinated Egyptians wishing to travel to the UK will no longer have to take PCR tests before their trip, nor spend a hotel quarantine after their arrival.
Oct. 8, 2021

MOROCCO – Moroccan government makes vaccination pass mandatory to access public spaces
The Moroccan government has decided to impose the COVID-19 vaccination pass on citizens to access public spaces. The measure currently concerns public administrations, touristic spots, as well as some private establishments, such as shopping centers, coffee shops, and restaurants. The decision seeks to prevent the spread of the COVID-19 pandemic, but it has aroused controversy, with many citizens criticizing it and claiming that it is “unconstitutional.”
Oct. 18, 2021

TUNISIA – New Tunisian government begins its mandate
The newly-appointed Tunisian Head of Government, Najla Bouden, has presented the list of new government members before Tunisian President Kaïs Saïed. The list, which includes 24 ministers and one secretary of state, was approved by the President, marking the official beginning of the new government’s mandate. The composition of the new Tunisian government comes nearly three months after President Kaïs Saïed sacked the previous Head of Government, Hichem Mechichi, and his entire government.
Oct. 11, 2021

TUNISIA – Germany removes Tunisia from the list of high COVID-19 risk countries
Germany has removed Tunisia from its “red list” of countries heavily impacted by the COVID-19 pandemic. The decision will allow German tour operators to program trips to Tunisia, which were suspended for nearly 18 months due to the COVID-19 pandemic. The decision also allows travelers from Germany to travel to Tunisia only by presenting their vaccination pass and a negative PCR test result that is less than 72 hours old.
Oct. 15, 2021

ALGERIA – Algeria resumes flights with Canada
Flights between Algeria and Canada have resumed, starting October 26, according to a statement from national air carrier Air Algérie. The airline will operate three flights per week between Algiers and Montreal, the main city of the French-speaking Quebec province in Canada. The flights have been suspended since March 2020 due to the COVID-19 pandemic.
Oct. 18, 2021

ALGERIA – Algerian government lifts night curfew across the entire country
The Algerian Government has decided to lift the night curfew imposed to curb the spread of COVID-19 in the country over the entire national territory. The night curfew was applied in 23 different Wilayas (Governorates), including most major cities. The new decision comes amid a relative improvement of the epidemiological situation in Algeria. Large gatherings and celebrations, however, remain prohibited. The new measure went into effect on October 20 and is scheduled to last at least 21 days, depending on how the sanitary situation evolves.
Oct. 18, 2021

EGYPT – Poverty rates in Egypt declined to 29.7% in the 2019-2020 fiscal year
Poverty rates in Egypt fell 2.8% during the 2019-2020 fiscal year, recording 29.7%, according to Egypt’s Central Agency for Public Mobilization and Statistics (CAPMAS). Extreme poverty in the country – the percentage of people who are unable to secure their food needs – has also declined to 4.5% in 2019-2020. CAPMAS noted that the percentage of poverty increases linearly with the size of the family – 80.6% of individuals who live in families with 10 or more members are poor, 48.1% among families with 6-7 members, and only 7.5% among families with less than 4 members.
Oct. 18, 2021

EGYPT – Fitch Ratings confirms Egypt’s ‘B+’ rating with a stable outlook
Fitch Ratings has confirmed Egypt’s Long-Term Foreign-Currency Issuer Default Rating (IDR) at “B+” with a stable outlook. According to the credit agency, the rating is supported by Egypt’s recent fiscal and economic reforms, which helped the country maintain stability and resilience through the COVID-19 pandemic.
Oct. 20, 2021

TUNISIA – Tunisian foreign trade’s volume declines in Q3-2021
The volume of foreign trade in Tunisia has witnessed a decline in the third quarter of 2021. The volume of exportations decreased by 4.3%, while importations have dropped by 6.3%. This evolution slightly decreased Tunisia’s foreign trade coverage ratio to 78.4%. The sectors that witnessed the largest declines in exports were the energy and oil sectors, along with electrical industries. The energy and oil sector also witnessed the largest drop in importations.
Oct. 29, 2021

ALGERIA – Algeria becomes a shareholder of EBRD
Algeria has become the 73rd shareholder of the European Bank of Reconstruction and Development (EBRD) after completing its accession process. Algerian authorities made a request for membership at the financial institution back in March 2020, which was approved in July of the same year. The accession process, however, was only achieved in October 2021. The membership will allow Algeria to become eligible for financial services from EBRD.
Oct. 25, 2021 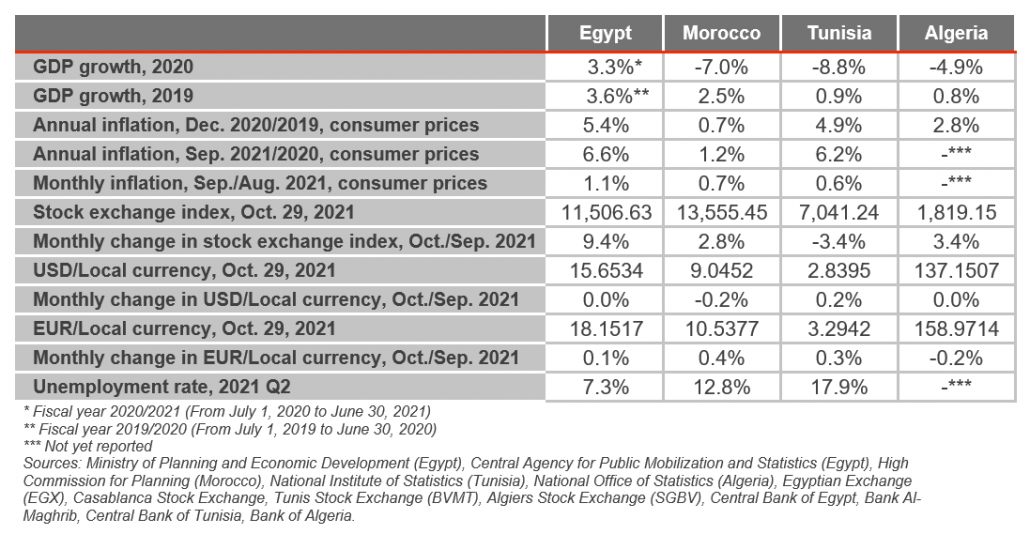