EGYPT – British and Japanese banks provide funds to Egypt-Saudi Arabia electricity connection project
The London-based Standard Chartered bank and Japan’s Sumitomo Mitsui Banking Corporation have announced the provision of USD 566.4 mn to finance the electrical interconnection project between Egypt and Saudi Arabia. The 14-year funding will be guaranteed by the Swedish Export Credit Agency. The electrical interconnection project will allow Egypt and Saudi Arabia to exchange up to 3,000 megawatts of electric power. The project will require a total investment of USD 3.0 bn and is expected to be completed by 2026.
Oct. 18, 2022

MOROCCO – Morocco suspends import taxes on domestic cattle
The Moroccan government has decided to temporarily suspend import taxes on domestic cattle weighing more than 550 kilograms. The decision aims to counter the increase in the prices of red meat in Moroccan markets and the difficulty of raising cattle locally in light of the ongoing drought. The tax exemption will remain in place until the end of 2023.
Oct. 19, 2022

TUNISIA – Dutch tomato producer Desert Joy invests EUR 200 mn to expand its activity in Tunisia
Dutch agricultural company Desert Joy has allocated an investment budget of EUR 200.0 mn to expand its activity in Gabes, southeastern Tunisia. The company specializes in the production and exportation of tomatoes. The investment will allow the company to generate around 4,000 new jobs and develop a production capacity of 36,000 tonnes of tomatoes, mainly destined for European markets. The expansion project will include the acquisition of agricultural lands, as well as the construction of plants for seawater desalination and for the treatment of wastewater to help with irrigation.
Oct. 22, 2022

ALGERIA – Car manufacturer Fiat signs an agreement to build a factory in Algeria
Italian car manufacturer Fiat, a subsidiary of Stellantis Group, has signed an agreement with the Algerian Ministry of Industry to build a vehicle production unit in Oran, northwestern Algeria. The factory will be located in the Tafraoui industrial zone. The project is set to become operational by the end of 2023. The value of the investment is yet to be disclosed.
Oct. 13, 2022

ALGERIA – Hyundai’s car assembly factory in Algeria resumes operations after a two-year suspension
The car assembly factory of Hyundai located in the Zaaroura industrial zone, northwestern Algeria, has resumed operating after a suspension of over two years. The factory suspended its operation in March 2020 due to supply issues caused by the COVID-19 pandemic. The industrial unit resumed its production at full capacity, utilizing seven production lines with an annual capacity of 70,000 vehicles. During the fourth quarter of 2022, all produced vehicles will be destined for Algerian public administrations. The cars will become available on the local market for the public in the first quarter of 2023.
Oct. 28, 2022

MOROCCO – King Mohammed VI announces a ‘pact’ to create 500,000 new jobs between 2022-2026
King Mohammed VI of Morocco has announced during a speech before the Parliament the upcoming signature of a “National Pact for Investment” between the Moroccan government, the private sector, and banks. According to the Monarch, the agreement would help mobilize MAD 550.0 bn (EUR 50.8 bn) in private investments and create 500,000 new jobs during the 2022-2026 period. The application of the pact would be supervised by the Mohammed VI Investment Fund, which was set up during the COVID-19 pandemic to mitigate its socio-economic impact.
Oct. 14, 2022

TUNISIA – Tunisian legislative elections to count 1,317 candidates
Tunisia’s Independent Higher Body for Elections (ISIE) has announced that a total of 1,317 candidates, including 193 women, have been registered to take part in the 2022 Tunisian legislative elections. The candidates will run for 161 parliamentary seats at the Assembly of the People’s Representatives, the lower chamber of the Tunisian Parliament. The elections are set to take place on December 17, 2022, more than eight months after Tunisian President Kais Saied decided to dissolve the country’s Parliament.
Oct. 27, 2022

ALGERIA – Algiers hosts the 31st Arab League Summit
Algeria has hosted in its capital Algiers the 31st Arab League Summit with the participation of official delegations from all the current 21 member states. The event was marked by the absence of several key figures, including Saudi Crown Prince Mohammed bin Salman and Morocco’s King Mohammed VI. The Arab League discussed several topics during the Summit, including the Israeli-Palestinian conflict, the ongoing food and energy crises aggravated by the Russian-Ukrainian conflict, and the potential readmission of Syria to the Arab League.
Nov. 1, 2022

EGYPT – Urban inflation in Egypt reaches its highest annual rate in four years
The annual urban inflation rate in Egypt reached 15.0% in September 2022 – the highest rate recorded in four years, since November 2018 when it had reached 15.7%. Meanwhile, the overall inflation rate stood at 15.3% in September 2022. The figures are higher than the predictions of the Central Bank of Egypt. However, they are expected to decline in the first quarter of 2023, according to the financial institution.
Oct. 10, 2022 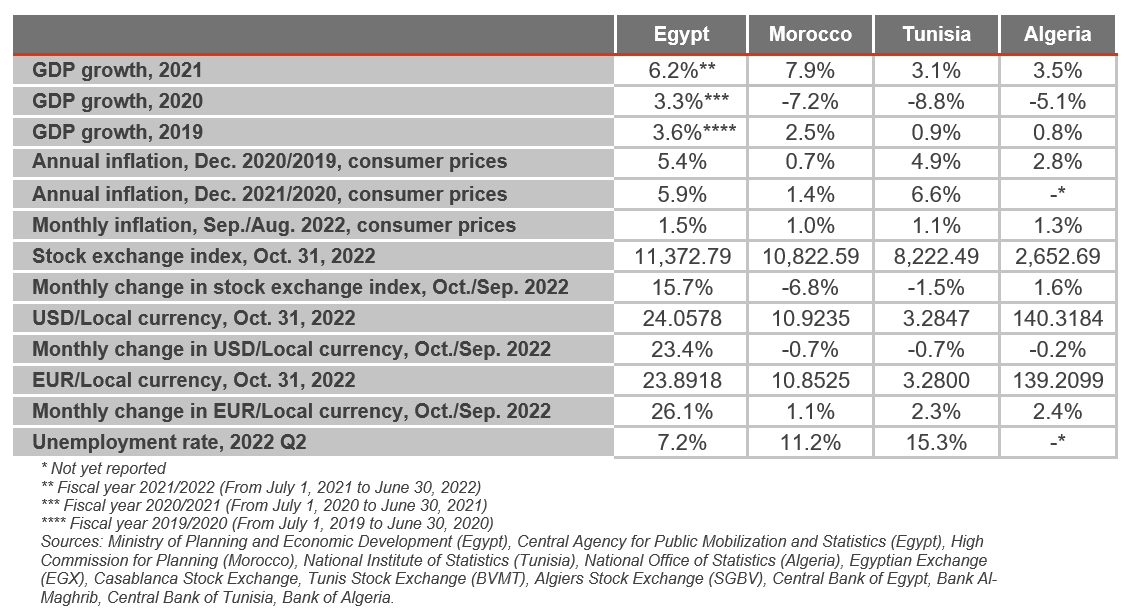