EGYPT – China’s OPPO signs an MoU to build a mobile phone factory in Egypt
Chinese electronics company OPPO has signed an MoU with the Egyptian Information Technology Industry Development Agency to establish a mobile phone factory in Egypt. The production unit will require an investment of USD 20.0 mn and its production capacity is expected to reach 4.5 million units annually. The factory is set to be built in the next three to five years and will generate around 900 job opportunities.
Sep. 13, 2022

EGYPT – UAE’s Tabreed earns a contract to build a power plant at the “Capital Med” project near Cairo
The Emirati National Central Cooling Company, known as “Tabreed”, has signed an agreement to provide energy services for the new “Capital Med” medical city project, northeast of Cairo. The contract has a value of around USD 83.4 mn. According to the agreement, the Emirati company will build and operate a power plant to generate energy for the entire medical city. The “Capital Med” project is planned to have a capacity of 4,000 beds, 700 intensive care units, 70 operating rooms, and around 15,000 medical staff.
Sep. 14, 2022

EGYPT – Egypt increases transit tolls in Suez Canal
The Suez Canal Authority has decided to increase transit tolls in the canal, starting January 2023. The toll will increase by 10% for dry bulk ships and cruise ships and by 15% for all other types of vessels. The Suez Canal Authority explained that the increase comes in light of the current global inflation and the changes that the maritime transport sector has witnessed.
Sep. 17, 2022

MOROCCO – Royal Air Maroc resumes daily flights between Morocco and Qatar
Morocco’s national air carrier Royal Air Maroc has decided to resume its daily flights between Casablanca and Doha, Qatar. The flights have been suspended since March 2020 due to the COVID-19 pandemic. The route will be operated using a 302-seats Boeing 787-9. The resumption of the daily flights comes a few weeks before the beginning of the 2022 FIFA World Cup in Qatar. For this occasion, Royal Air Maroc has signed an agreement with Morocco’s Ministry of Sports and the Moroccan Royal Football Federation to offer two-way tickets between Casablanca and Doha for only MAD 5,000 (EUR 463) for the entire duration of the tournament.
Sep. 8, 2022

MOROCCO – Siemens Gamesa decides to close its wind turbine blades factory in Morocco in 2023
German multinational Siemens Gamesa has decided to close its factory in Tangier, northern Morocco, due to a decrease in global demand for the type of wind turbine blades produced in the factory. The closure will go into effect at the start of 2023 and it will affect 500 workers. The Tangier factory is one of many Siemens Gamesa production units that will get suspended around the world, globally affecting 2,900 workers. Despite closing the Tangier factory, Siemens Gamesa will maintain its regional headquarters in Casablanca.
Sep. 15, 2022

MOROCCO – Outsourcing multinationals Majorel and Kolibri to create 3,000 new jobs in Morocco
International outsourcing companies Majorel and Kolibri have signed two MoUs with Morocco’s Ministry of Digital Transition and Ministry of Industry to launch new investment projects in the country. According to the two agreements, Luxembourg-based Majorel and Canada-based Kolibri will invest MAD 375.0 mn (EUR 34.9 mn) in outsourcing offices in Morocco by 2027, generating around 3,000 new jobs.
Sep. 22, 2022

TUNISIA – DP World expands its wholesale e-commerce website Dubuy.com in Tunisia
Emirati logistics and global supply chain multinational DP World has expanded its e-commerce website, Dubuy.com, in Tunisia. The website is a global wholesale marketplace that offers various products and comprehensive logistics services, including storage and delivery. DP World intends to use this expansion into Tunisia as a hub to grow its business in North Africa and the entire African continent.
Sep. 5, 2022

ALGERIA – UK’s Petrofac earns a EUR 300 mn contract for a gas field project in eastern Algeria
British engineering firm Petrofac has earned a contract to build a “separation and decarbonization unit” in the Tinrhert-Alrar gas field, eastern Algeria. The contract, financed by Algeria’s national oil and gas company Sonatrach, has a value of DZD 42.7 bn (EUR 309.3 mn) and a completion deadline of 36 months. The project will increase the production capacity of the Tinrhert-Alrar gas field by 10 million cubic meters per day, to reach a daily total production of 25 million cubic meters.
Sep. 29, 2022

EGYPT – Egyptian Senate approves a new draft labor law
The Egyptian Senate has approved a new draft labor law that brings several modifications to the legal regulations of the relationship between employers and employees. According to Egyptian media, the new legal text would establish the principle of linking wages to productivity in order to reassure investors and motivate workers to become more productive. The draft labor law also provides for severe fines against employers who discriminate between their employees or are involved in forced labor.
Sep. 20, 2022

MOROCCO – Morocco completely lifts COVID-19 entry requirements
Moroccan authorities have decided to fully cancel the requirements of PCR tests or vaccinations against the coronavirus to enter the country. Incoming passengers now have to only fill out a sanitary form to enter Morocco. Before the decision, visitors had to present either a full-vaccination certificate or a negative PCR test for the coronavirus in order to be eligible to enter the country.
Sep. 30, 2022

EGYPT – Egypt’s LNG exports reach more than USD 8 bn in value in the 2021-2022 fiscal year
Egypt’s exports of liquefied natural gas have reached a total value of around USD 8.0 bn in the 2021-2022 fiscal year, between July 2021 and June 2022. In terms of volume, Egyptian liquefied natural gas exports increased by 7.2 million tonnes to reach a total volume of around 43.2 million tonnes. The increase is mainly attributed to the growing need for natural gas in Europe, due to the ongoing energy crisis.
Sep. 26, 2022 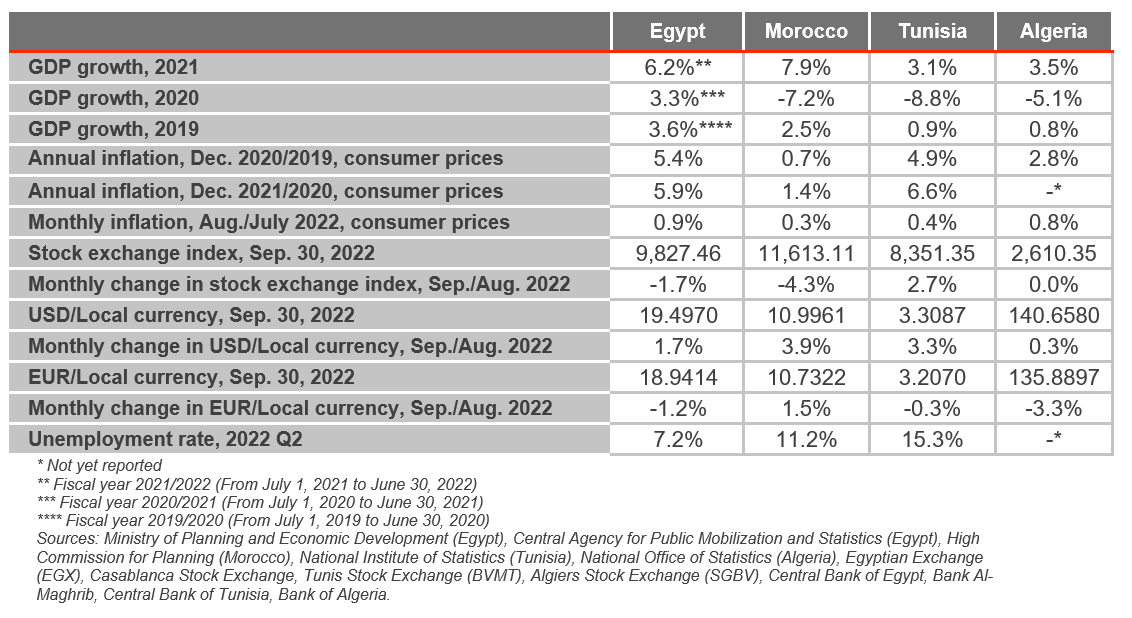